What’s the Future of Galas in Boston?

Boston’s social butterflies have spent the past two years attending Zoom fundraisers in their pajama pants. What happens when we actually have to don tuxes and gowns again? 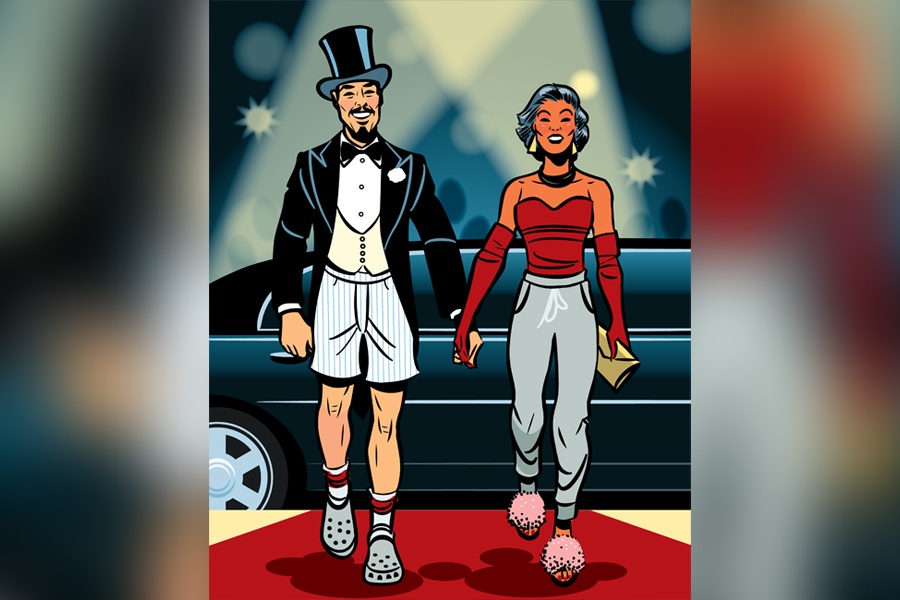 Everyone probably remembers what they were doing when the pandemic started. For me, it was business as usual as Boston’s gala circuit began ramping up in 2020. On March 3, seven days before Governor Charlie Baker announced a state of emergency, I modeled in a charity fashion show for Dress for Success, in the newly renovated ballroom of the Mandarin Oriental. Backstage, when fellow model and Chronicle anchor Shayna Seymour expressed concern over the growing rumblings about the novel coronavirus, I blithely reassured her that it was nothing to worry about. After all, I had recently been skiing in Japan, amid the first recorded super-spreader event outside China, and I was fine. “They always blow these things out of proportion,” I said. “Remember all of the hoopla about H1N1?”

The next evening, I attended the Jewish Community Center of Greater Boston’s major fundraiser, where the mood was more circumspect. People kept their distance, and one guest joked that her lifelong germaphobia had prepared her well for a pandemic, given that she’d been stockpiling hand sanitizer and Clorox wipes for years. About a week later, we were all in lockdown, disinfecting everything from doorknobs to groceries, interacting only with members of our own households, and wondering if the apocalypse had arrived. Little did we know that the next two years would be filled with isolation and anxiety as COVID-19 continued to spread and mingling freely with others went from ordinary to off-limits.

Before the pandemic, May, with its milder weather, was traditionally the height of “gala season” in Boston. It was the ideal time for nonprofits to host their big-ticket fundraisers and squeeze some money out of benefactors before they scattered to the four winds for the summer, and before the end of most charities’ fiscal years, on June 30. That was then. This is now. In the two years since COVID put the kibosh on socializing, we’ve all changed. And as we emerge from our bubbles, cautiously optimistic that gathering in large groups is no longer likely to trigger a deadly health crisis, the rules of social engagement have irrevocably changed, too. Is cheek kissing acceptable again? Is the elbow bump here to stay? And does a hug mean “I’ve missed you” or “I’ve completely forgotten about personal boundaries?”

In addition to navigating those potentially awkward personal encounters, the folks who run nonprofits will undoubtedly be asking a few existential questions that will have an enormous impact on their bottom lines. Are Bostonians heading into a new Roaring ’20s, or cautiously returning to a world where the threat of illness has permanently imprinted itself on our psyches? Are we going to party like it’s 1999, or stay on the sofa forever? The answers to those questions will likely determine the future of the city’s social scene.

Boston’s puritanical nature has always dictated that any public display of enjoyment must somehow be an act of charity. That’s why the social life of this city revolves around the fundraisers, galas, and benefits that sustain our hospitals, cultural institutions, and countless other nonprofits.

The most high-profile of these benefits, like the Boston Ballet Ball or Party in the Park, which benefits the Emerald Necklace parks, not only define Who’s Who in our little Whoville, but also provide a good deal of the lifeblood (pronounced “money”) that keeps nonprofits afloat. In other words, we may be talking about $1,000-a-head hootenannies, but their impact on the beneficiary organization can’t be overstated.

Just look at what’s happened to some of our biggest nonprofits since in-person parties were suspended in 2020. After holding its signature fundraising event, Storybook Ball, virtually for the past two years, MassGeneral Hospital for Children saw a 42 percent decrease in proceeds—most notably from the lack of in-room fundraising such as live auctions. The Huntington theater, meanwhile, was forced to lay off 11 staffers and furlough 46 others during the summer of 2020, according to the Boston Globe, with pandemic-related losses at the time projected to be around $6.3 million from March 2020 through the following winter. In an official statement, the Boston Symphony Orchestra reported that it “suffered $51.5 million in lost revenue between March 2020, when the pandemic shut down live performances, and July 2021, when performances resumed during the summer season at Tanglewood.”

Not insignificant sums, and presumably, similar hits were taken by virtually every other nonprofit in the city. All of the organizations I spoke to expressed deep appreciation for the generosity and largesse of their trustees and major benefactors, many of whom donated to special fundraising efforts during the pandemic. But as a representative for the Foundation to Be Named Later pointed out, “the pandemic wreaked havoc on kids and their families in the underserved areas we support, so need increased exponentially.”

Now that things are beginning to normalize, events have started taking place IRL again, albeit with some significant changes. “Personally, from what I’ve seen, there’s a strong desire to gather again, to celebrate being together, but to do it in a somewhat cautious way after some previous false starts,” says philanthropist Lynn Dale, who sits on several boards and chaired last year’s virtual Ballet Ball and this year’s live gala, which took place on April 9. “I don’t believe any organization wants to be the one to put its supporters at risk and go down as the latest super-spreader event. And I think every event is taking stock in terms of risk assessment.”

Accordingly, attendees at the Ballet Ball were required to provide proof of vaccination and a negative COVID-19 test (PCR within 72 hours, or rapid antigen within 24 hours) before entering the venue. No exceptions or exemptions were allowed, and masks were optional. The ballet also used a digital platform developed by Harvard, Stanford, and MIT called Clear Bill of Health, which allows users to share “verifiable health statuses” with the people they choose.

Requirements like these go a long way toward allaying lingering fears about COVID, but the truth is, they address only half of the equation—namely, the guests. As for event staff, different rules apply. “We were required to provide proof of vaccination, but that recently changed at numerous venues,” says Bobby Perino, the general manager of Max Ultimate Food, one of the city’s leading catering companies and a major player in the nonprofit events realm. “As for masks on our employees, we’re leaving that up to the client. They can require them or not, and if not, it’s a personal decision for staff, if it makes them feel safer while working.” He estimates that about 70 percent of clients are still asking staffers to mask up. Ty Kuppig, founder and creative director of Tyger Productions, anticipates keeping the mask requirement in place for his employees a bit longer. “It’s a question of optics,” he says. “While people are comfortable being in restaurants without masks, face coverings on waitstaff provide a sense of safety. With the potential for new variants, we still find this a worthwhile preventative measure, so I foresee us continuing that into the summer, and then we’ll reassess.”

However etiquette changes (or doesn’t) in the next few months, one glance at the calendar is all it takes to see that in-person benefits and fundraisers are back in full force. Last month, in addition to the Ballet Ball, there were parties for MassArt, the Women’s Lunch Place, the Breast Cancer Research Foundation, the Foundation to Be Named Later, and the Boston Children’s Museum, while this month boasts events for the Institute of Contemporary Art, the Huntington theater, the Emerald Necklace Conservancy, Artists for Humanity, Youth Villages, and MassGeneral Hospital’s autism programs. (It’s worth noting that the latter will be taking place in the relatively open air of Fenway Park.) I should also point out that those are only the ones I’d been invited to, as of March 10.

It’s a long list, to be sure, one that may herald a sea change in perspective among Boston’s socialites. Back in May 2020, the last time I published a column about the toll of the pandemic on Boston’s galas, I spoke with Simone Winston, a key figure on the city’s fundraising scene. “Right now, I can’t foresee a day in the near future when I’ll feel compelled or comfortable to be in a space with hundreds of other people, in close proximity, celebrating in any ostentatious manner, in the name of philanthropy,” Winston told me at the time. However, when I saw her at an outdoor fundraiser last fall—in between the depredations of Delta and Omicron—we embraced warmly. And when I spoke to her recently about this gala season, she said, “The late summer did seem a bit more Roaring ’20s. Then we all got smacked with Omicron. I wonder if people will be a bit more resistant to jumping in with both feet right away. Looking forward to finding out.”

Perino, for his part, predicts the rebound will be robust and raucous, saying, “After two years, our phones have been ringing off the hook and emails are flooding in. People are ready to party, and we are thrilled to have our event calendar filled back up again.” Kuppig shares this sanguine attitude, but with a caveat. “As we all step into this new normal with eagerness and excitement, it’s important to stay nimble,” he says. “For example, we’ll continue to be thoughtful about selecting venues that allow additional space for circulation and flow, giving guests a greater sense of comfort.”

The resurrection of socializing has also gotten many nonprofits thinking about future gala seasons. “One thing I’ve seen with a number of the groups I’m currently involved with is that this moment in time is allowing organizations to take a good look at their annual events and determine if it’s a good time to disassemble, rebuild, and redesign for this new era,” Dale says. “There’s an opportunity to freshen up the whole concept of their events to fit the times and our changing mindsets, needs, and priorities.” In other words, it might be time for a new coat of paint on shindigs that have been the same year after year. Lord knows the rubber-chicken dinner-dance could stand for an overhaul.

That said, I suspect some of the city’s most beloved fundraisers won’t be changing much. When the Emerald Necklace Conservancy announced that Party in the Park was returning this month, there was a flurry of social media comments from excited attendees who said they’d already purchased their hats.

I’ve had my hat ready for Party in the Park since last summer, and while I’ll admit to a tiny bit of trepidation, I’m welcoming a return to group photos where you can actually see people’s faces, and to friends dancing cheek to cheek. And I’m swearing a solemn oath not to shame, snub, or otherwise judge anyone, even if they rebuff my awkward lunge for a long-deferred hug. I’m also praying that after two years of pandemic binge eating, my tuxedo still fits.