From truffle sex to truffles in Harvard Yard, here's everything you ever needed to know about the prized fungi.

Now that we’re in the throes of truffle season, chefs and servers are busy shaving slices of fungal gold on dishes all over town. To better appreciate your next taste of these earthly delights, here’s what you need to know about the science of growing and eating truffles.

What exactly is a truffle and how does it relate to a mushroom?

Truffles are underground mushrooms. Normally when mushrooms have “sex” and disperse their offspring (spores), they do it out in the open. Those brightly colored mushrooms in the forest that look like caps or cups are typical mushrooms that pop up from the ground. These mushrooms are lined with spores that disperse, land in a new location, and grow to become a new fungus.

Truffles, however, prefer to have sex in the dark. The gills that drop the spores of a typical mushroom are packed together in truffles to form a sac. It’s these inverted mushroom sacs that truffle hunting dogs find buried in the soil. When you eat a slice of a truffle, you are eating millions of tiny little spores that would have grown up to become baby truffle fungi. 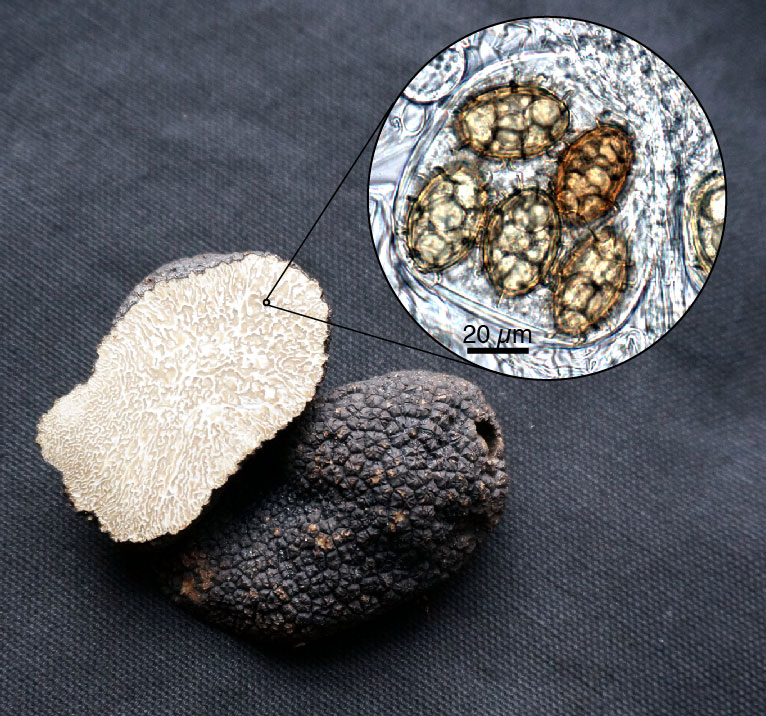 Why are truffles so rare and expensive?

Truffles are rare because they only grow in very specific conditions. Unlike other mushrooms that grow on dead logs or in the soil (see our previous post on nature’s three ways to make a mushroom), truffles need a live plant to grow in a relationship called the ectomycorrhizal symbiosis. The truffles get sugars from the roots of the tree and in return the truffles provide nutrients from the soil to their tree partner. Truffles only grow on certain types of trees, including oak, hazel, poplar, beech and pine.

The challenge in growing significant quantities of truffles is that you need to grow both the tree and the fungus—and you need them to cooperate with each other while a whole zoo of other microbes lurks in the soil. Scientists still don’t know all of the conditions that tell the fungus to make a truffle structure, so it’s impossible force truffles to grow. Growing the appropriate trees in the correct type of soil and climate is the best you can do—the rest is largely up to nature.

Most truffles are still harvested in Europe where they have been growing for millions of years. There has been considerable success growing high quality truffles in Australia and moderate success growing them in the United States.

What are the main types of truffles?

The most highly prized, most aromatic, and most expensive truffles are the white truffles. Their season ranges from November to early January. Prices are usually near several thousand dollars a pound. This year’s white truffle season happens to be one of the best in a long time— it started early, prices are low (relatively speaking), and quality is high. If you’ve never had them, this is the season to try them.

A trio of this season’s white truffles at No. 9 Park.

Black truffles are somewhat more woodsy and mushroomy than white truffles, and not as aromatic. But these have great truffle flavor and are available from December through March when they come from France as Périgord truffles. In our summer, we get them from Australia. Depending on the season, black truffles are usually half the cost of white truffles. A cross-section of a Périgord black truffle.

Like their cousin the black truffles, summer truffles and Burgundy truffles (Tuber uncinatum) are black on the outside. However, their interior is much lighter in color, ranging from light brown to white. These truffles tend to have minimal truffle flavor and instead have a simple mushroom earthiness. They’re the least expensive of all the truffles (about one tenth the cost of white truffles), and are available during summer where they come from Italy and France. These truffles are beautiful and delicious, but because of their simple flavor, they often leave people wondering about all the truffle hype.

A cross-section of a summer truffle.

Numerous species of desert truffles grow in arid regions in Europe, Africa, and Asia, and have played important roles in the cultures of many desert societies. American pecan farmers have been getting some help from American truffle scientists to explore the ecology and culinary potential of the pecan truffle (Tuber lyonii). Truffles can even be found in our own backyards, although it’s very unlikely that they’d be a species that would taste good. During his Ph.D. research, Ben detected truffles under an oak tree in Harvard Yard.

What chemicals are responsible for providing truffles with their distinct flavors?

There are many volatile compounds that scientists have identified in truffles that contribute to their aromas. Each species has a different set of chemicals that provide unique aroma profiles. In a study of the white truffle, 37 different compounds were found to be associated with typical white truffle aroma.

What is the best way to incorporate a truffle into a dish?

Scott loves to pair the white truffle with a Parmigiano-Reggiano risotto or perfectly scrambled eggs. He also loves white truffles shaved over handmade tagliatelle with plenty of butter and Parm. When using truffles with pasta, make sure the pasta is hot to help bring out the volatiles of the fungi.

Pair black truffles with with beef. More specifically, we love it with a roasted ribeye, topped with a slice of seared foie gras, and a Madeira pan sauce. Black truffle also pairs well with surf and turf.

For summer truffle, you can shave it on on anything you’d like to use to impress someone. Scott tends to use a dish with broth so that the limited truffle flavor is dispersed and somewhat more pervasive. Braised lamb shoulder with, say, salsa verde and bagna cauda? Shave some summer truffle on it.

Why are European truffles becoming more difficult to get?

European truffle harvesters have noticed a steady decline in abundance of truffles over the last several decades. Scientists believe that climate change may be partly to blame. Summers are becoming dryer in many regions where truffles are grown and these dry summers inhibit the growth of truffle fungi. This could actually be a good thing for other parts of the world, however, where climate change is creating new environments where truffles could be grown.