Five Things You Must Eat (and Drink) at Boston Calling

The most delicious, portable, Instagrammable treats from the 2017 food vendors.

From a hazy delicious Mikkeller pale ale, to a waffle cone full of barbecue, here are five unique festival food options to sustain your musical enjoyment on Saturday and Sunday. 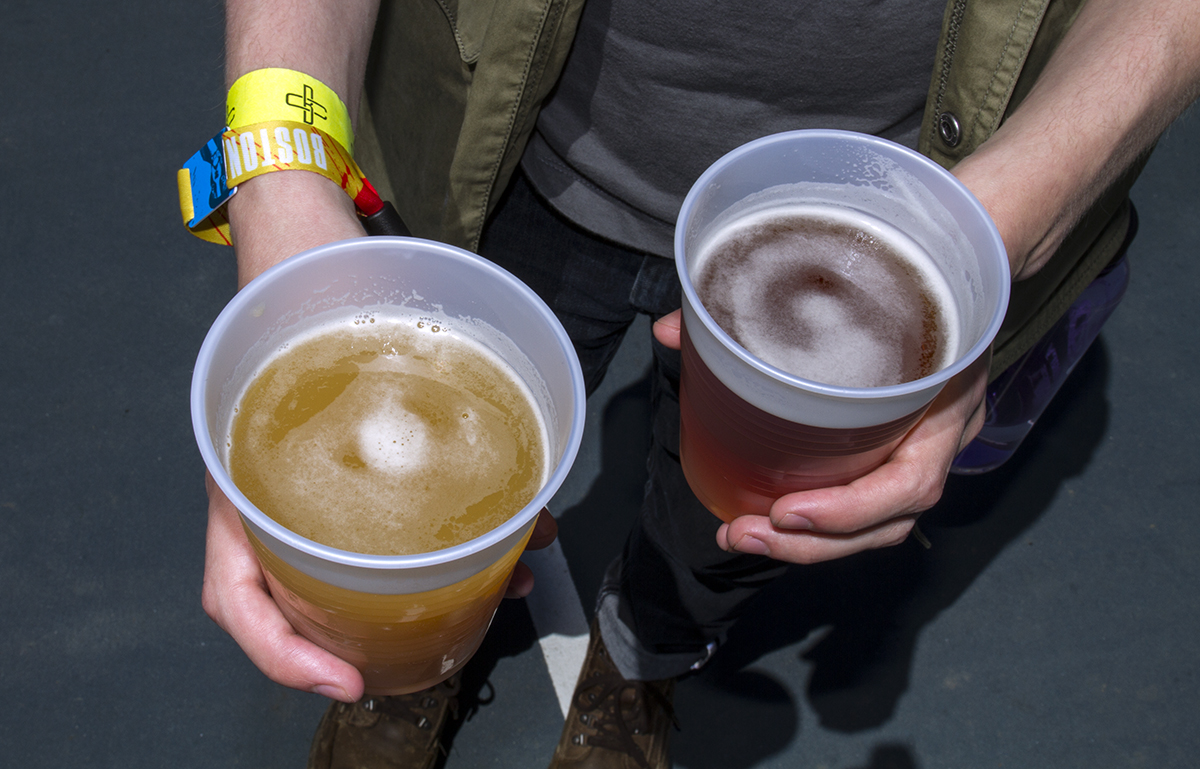 Yes, at $11 a pop, we’re telling you to get the most expensive pint at the fest. The San Diego-brewed juice isn’t billed as a New England-style IPA, but it has the most desirable attributes of the trendy style. The hazy American pale ale is loaded with citrusy softness, thanks to Mandarina and Citra hops (5.8%). If you’re in search of a dark brew, go for the coveted oatmeal stout, Beer Geek Breakfast (7.5%). Waves IPA is a more classic American IPA style (7.3%), with floral notes and good bitterness.

Location: Mikkeller beer garden, on the tennis courts on the way to the Blue Delta Stage 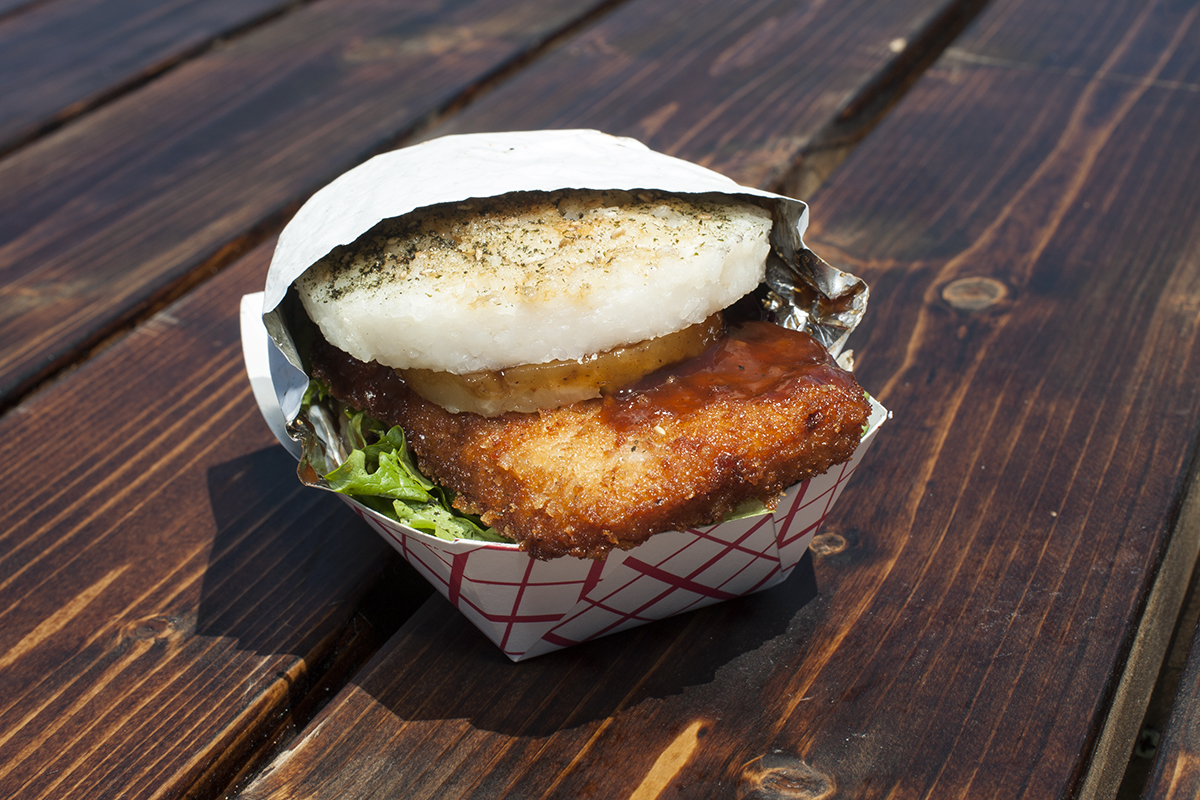 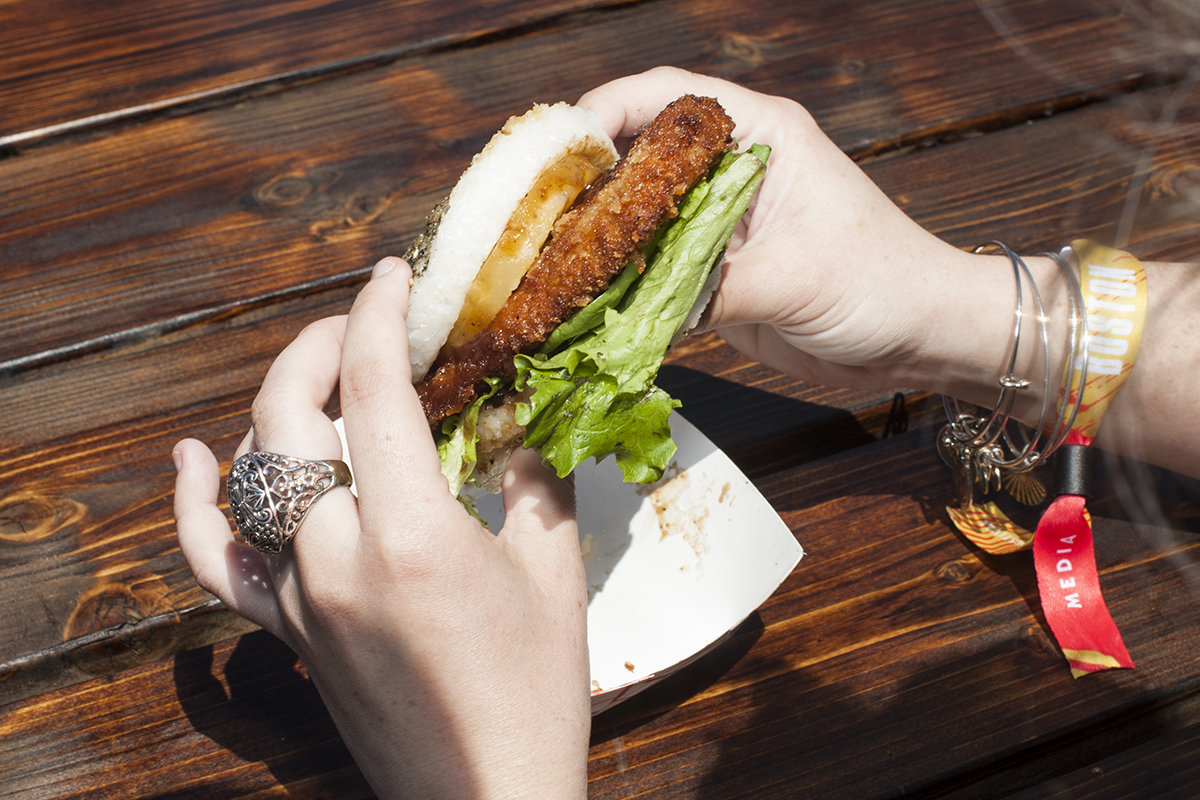 Jessica Chen grew up eating rice balls formed into fun shapes, and she kept those in mind when she set out to create a portable rice plate concept. Her Boston-based food truck, Riceburg, is festival-friendly: Her mala spicy chicken sandwich, a crispy patty topped with a slick of spicy Szechuan-style sauce and a ring of pineapple, is a handheld flavor bomb, and a great option for gluten-free diners—though make sure to grab plenty of napkins.

Location: Among the food vendors behind the Ferris Wheel 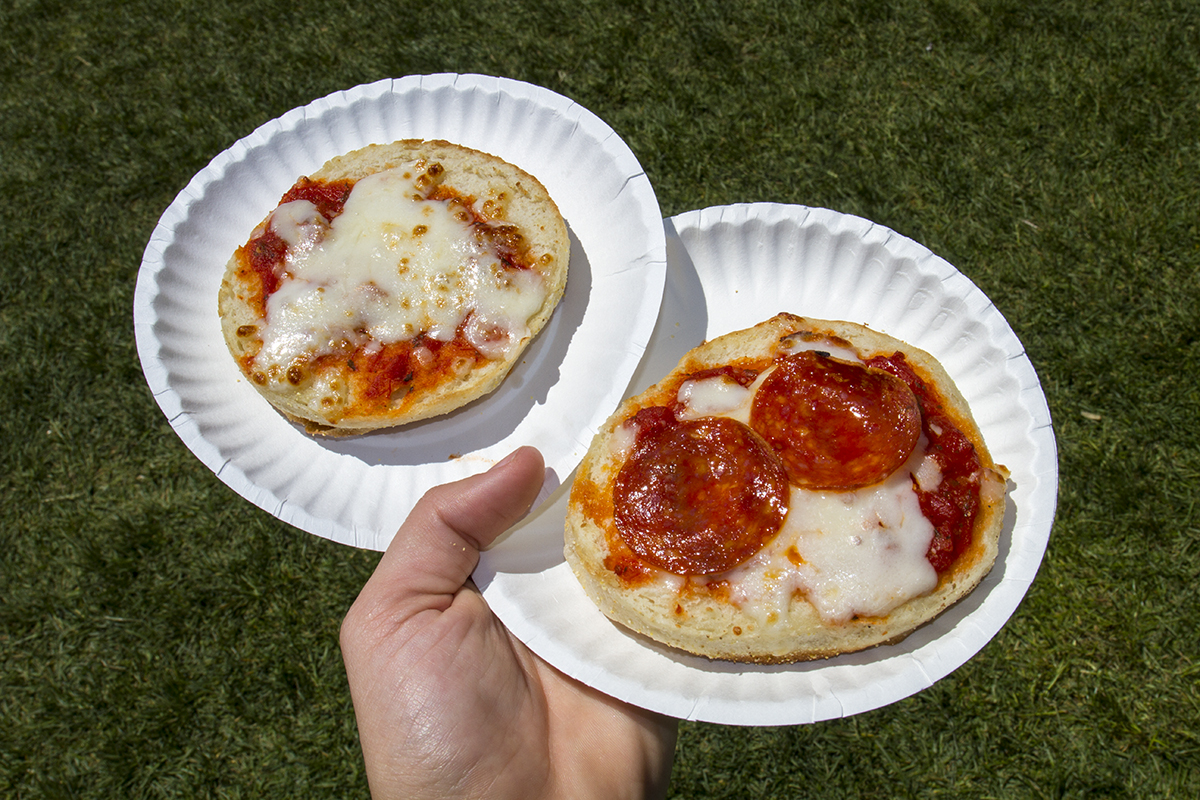 Maybe you’ve tried Dan Crothers’ artisan English muffins by the four-pack from a store like Whole Foods, where Stone & Skillet has been on shelves for about three years. But he and cofounder Kyle Meekins are always down for fun, pop-up style events, so when Boston Calling came, well, calling, they jumped at the opportunity.

“We’re getting a great turnout, and people are really excited,” Crothers says. (Show us the person who doesn’t love an English muffin pizza.) “It’s easy because it’s portable. You just grab it and walk out to go see your favorite artist.”

The quick-cooking pies come topped with a sweet sauce and mozzarella, and pepperoni if you so desire. Get a couple for a meal, or pop over to their booth throughout the festival for a quick and satisfying snack.

Location: Food vendors on the hill in front of the Delta Blue Stage 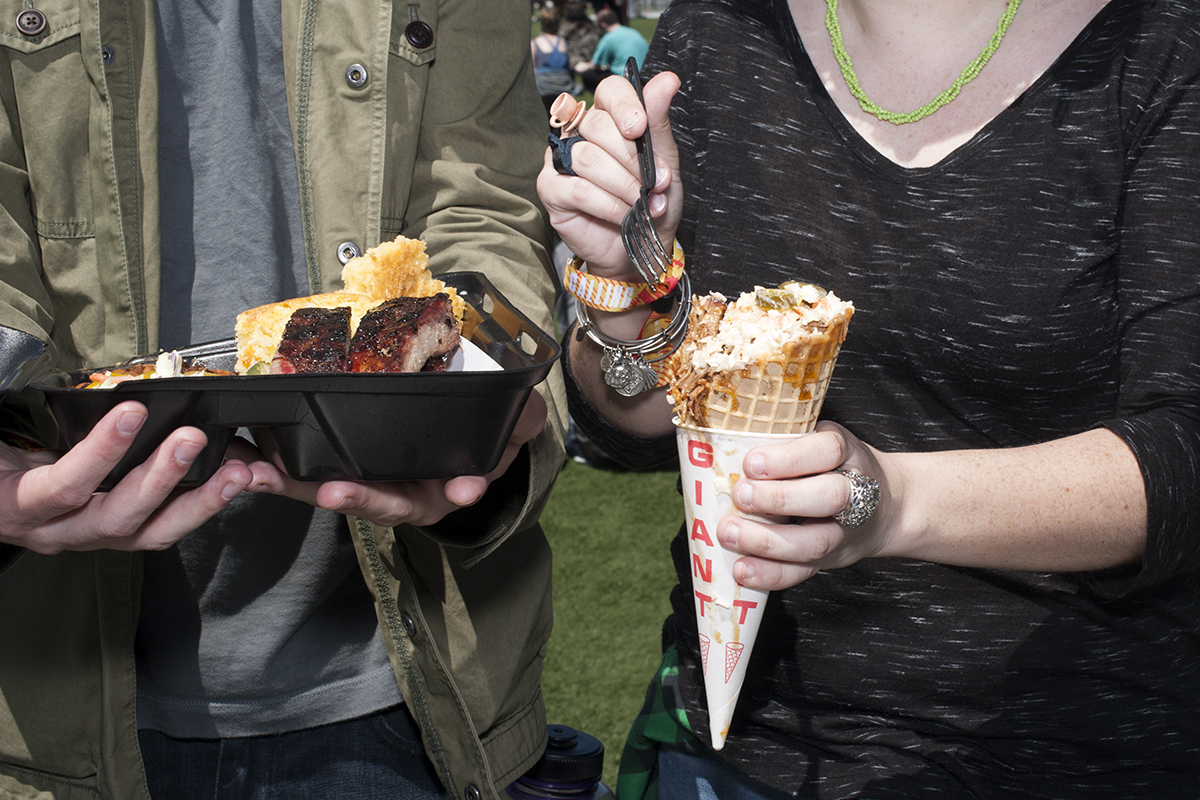 Firefly’s, a Marlborough restaurant with a huge catering operation, is a familiar setup at Boston Calling, having participated in the festival in 2016, too. This spring, they’re not the only smoker in town—the barbecue scene is also being represented by the Smoke Shop by chef Andy Husbands.

But there’s no competition. The two pitmasters are longtime friends, says Firefly’s owner Steve Uliss, and he actually advised Husbands to get involved this year, he says. 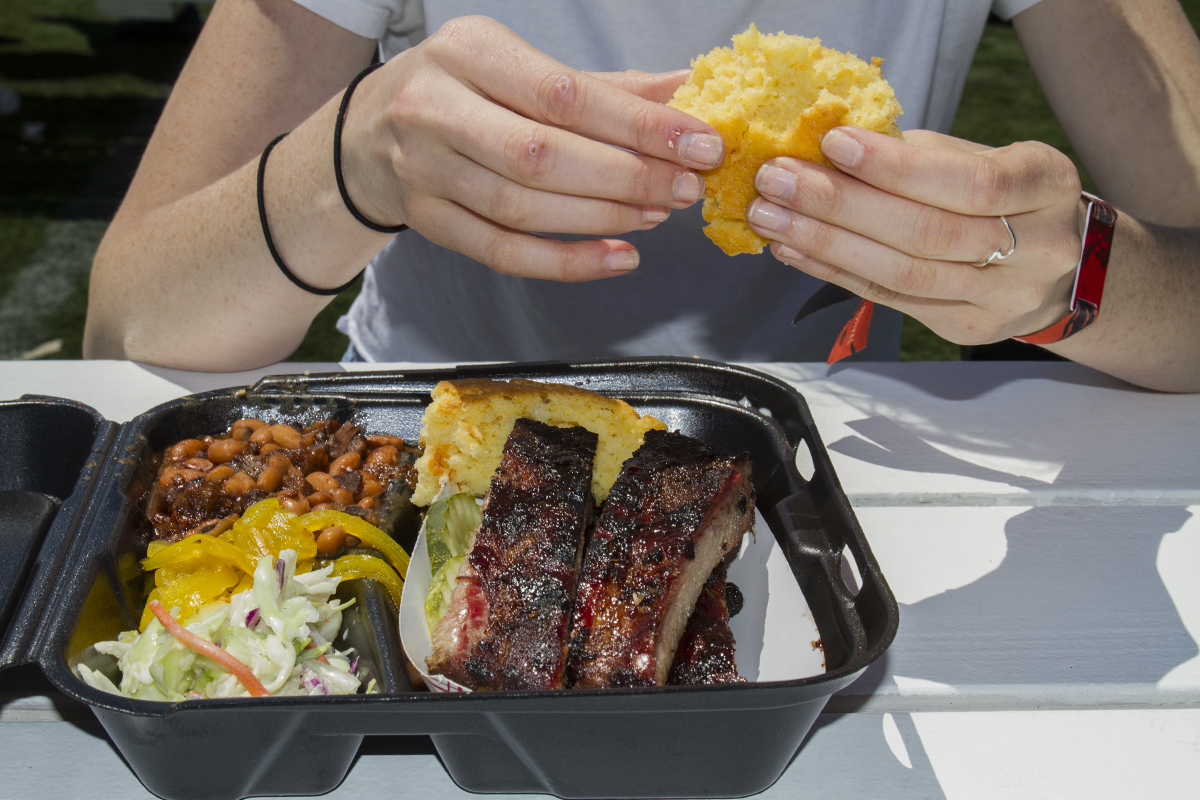 And the crowd approves. Uliss says he’s never been as slammed as he was on Friday night of the festival, estimating Firefly’s served between 1,200-1,500 covers. His wife, Amy, and two daughters, ages 19 and almost 22, get a ticket to the festival—to be put to work. “You need all the help that you can get,” Uliss says.

Across the green, the Smoke Shop was also feeling the love. General manager and partner Ian Grossman says the line was unending on Friday night—at one point, he asked a customer how long he waited, and was told it was nearly an hour and a half.

“Everyone had a line,” Grossman says. The festival organizers have said they will try to address that on Saturday, and food vendors themselves all say they expect things to go more smoothly. “We’ve improved our system today,” Grossman says. Plus, most of the Saturday Smoke Shop crew was also there on Friday, so they’re prepared, he adds.

Beyond the joviality between the pitmasters, and the fact that there is enough demand for both, the two barbecue vendors also differentiate themselves in one key way: the Smoke Shop’s BBQ Bomb. A sweetened waffle cone is loaded with pit beans, queso macaroni and cheese, chopped coleslaw, and you choice of pork, chicken, or brisket, topped with a few piquant pickled jalapenos. 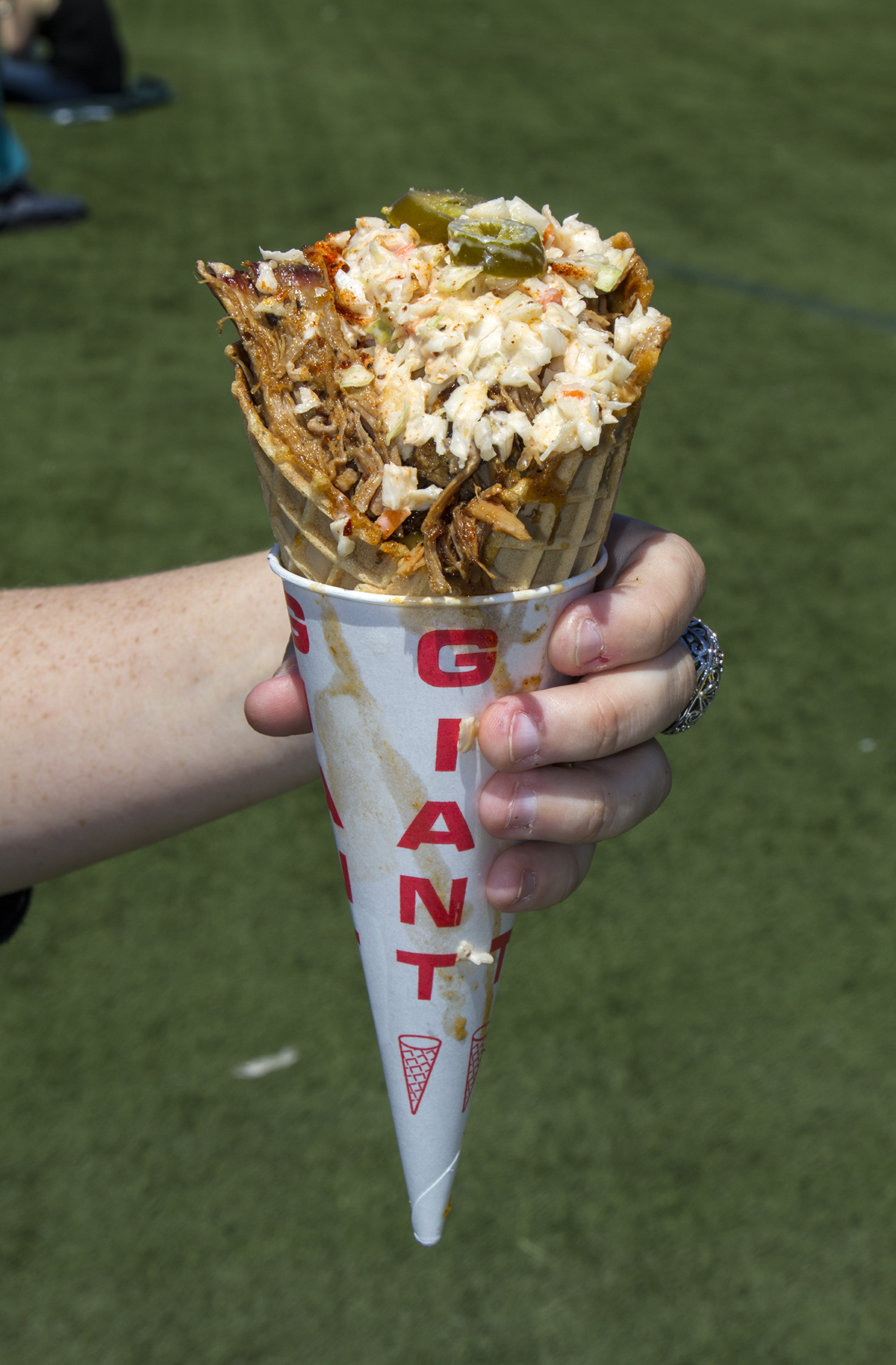 “To be perfectly honest, I was trying to think of something that would be Instagrammable,” Grossman admits, laughing. 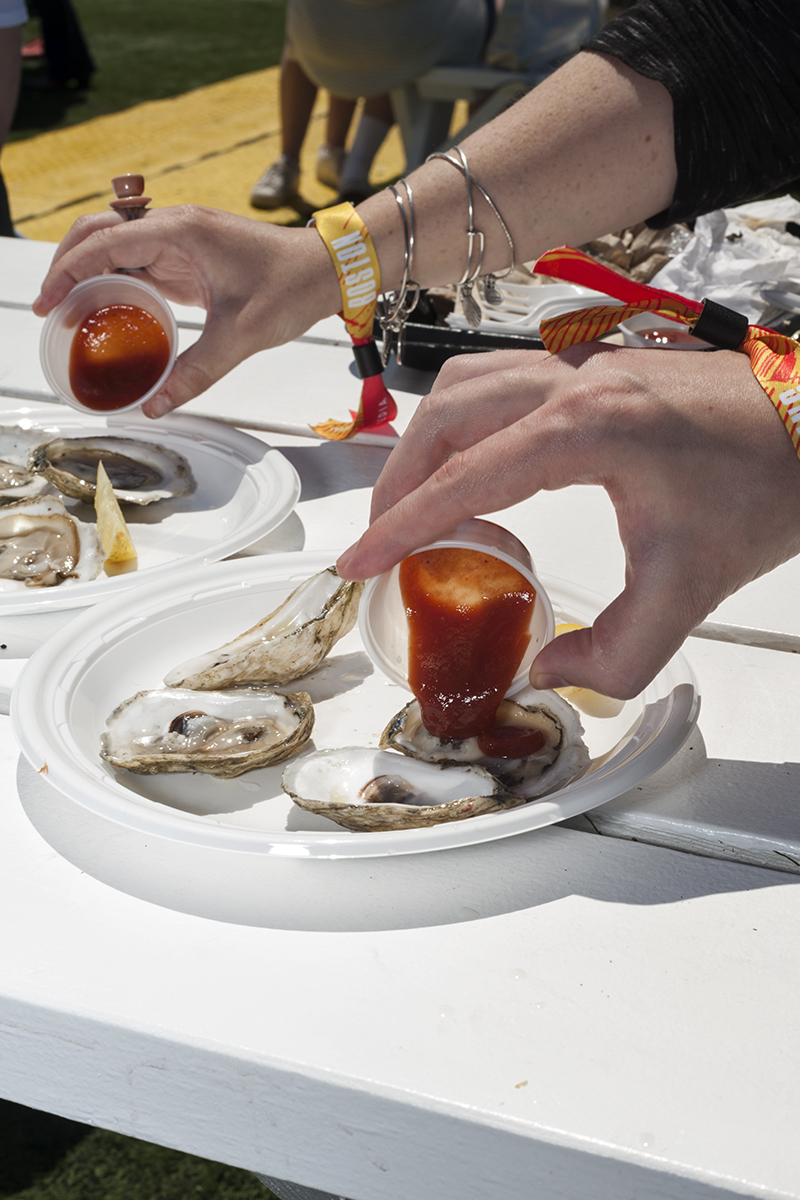 Standish Shore Oysters on the Half Shell at Shuck Food Truck

Because this is Boston. What other music festival has fresh, Duxbury oysters?