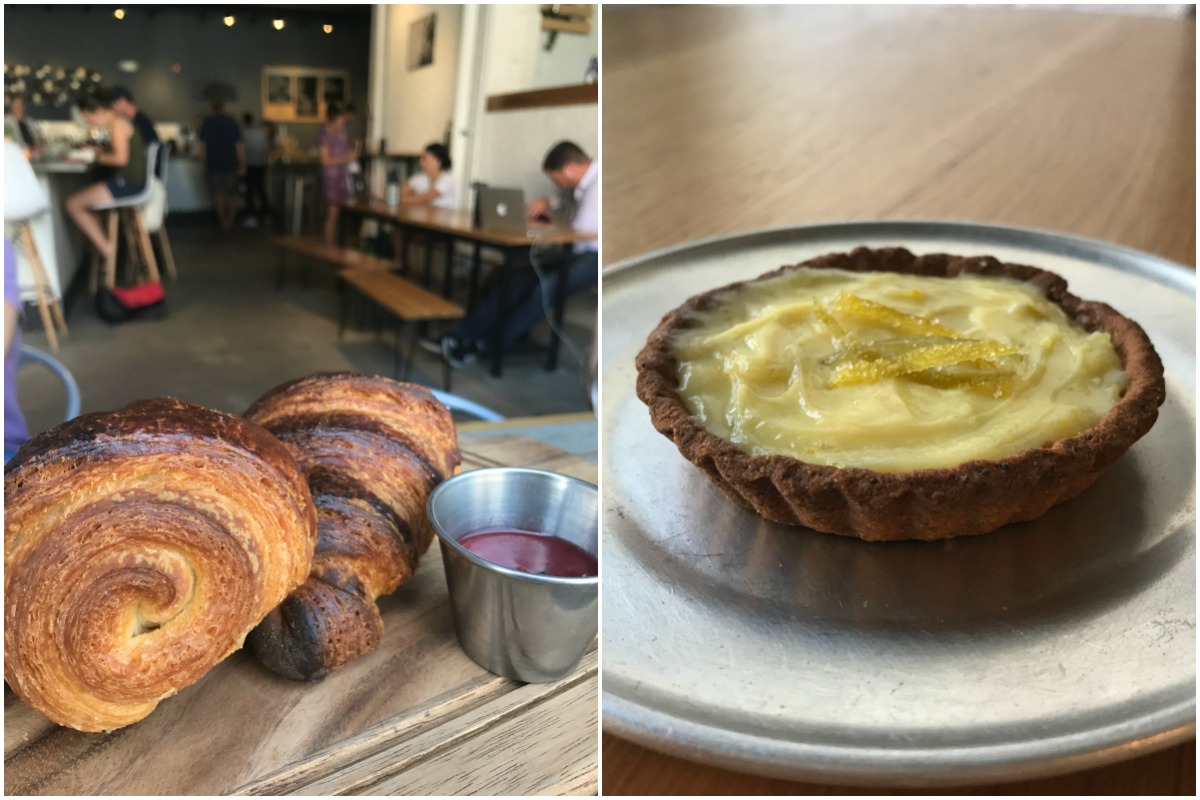 It’s not just Lamplighter beer dinners that have come from the brewery’s proximity to the award-winning Bondir restaurant. Now the colocated café, Longfellows, is reaping the benefits of being neighbors with chef Jason Bond. Bondir-made croissants and other baked goods are now available daily on the café menu.

Longfellows, co-owned by Alisha Fowler and Jesse Jenkins, opened in Cambridge late last year with a wide range of Barrington Coffee espresso drinks, cold brew (and flights), Mem Teas, and seasonal sparklers. From day one, it has served a succinct but solid menu of breakfast-y items sourced from local partners, including Union Square Donuts “doughies,” and a house breakfast sandwich on a Stone & Skillet English muffin. It’s their great pride, the owners say.

“As a locally-run business housed inside of another local business (double local OMG), Longfellows is thrilled to partner with producers and purveyors from across Massachusetts,” they write on their website.

Fowler, who was program director at the non-profit Chefs Collaborative before this venture, has worked with Bond on sustainable sourcing in the past, she says. “He has such a vision of good food, and local food, and we strive to be that way as well. We really take a lot of pride in what we offer here, so it’s a great fit.”

Bond’s debut opened in Cambridge in 2010. An alum of Barbara Lynch restaurants including No. 9 Park; Beacon Hill Bistro, and L.A. Burdick’s New Hampshire headquarters, he’s also worked in Paris and Virginia. Bondir was among Bon Appetit’s Hot 10 in 2011, and it has earned Bond a nomination for the James Beard Award Best Chef: Northeast.

But I’m a sucker for most anything heirloom, such as those grits. And for the nutty, fresh flavor of the flours Bond uses—most from Four Star Farms in Northfield—in the breads he’s teaching himself to make with admirable results (pray he’s serving the cranberry-walnut when you go). As for the expertise he acquired during a year cooking for the L. A. Burdick restaurant at its New Hampshire headquarters? He puts that to use in the best dessert, chocolate panna cotta ($10), the most delicate but deeply chocolaty pudding you’ll ever have.

Now his pastries can fuel your mornings. Sourcing local flours, and hand-ground, single-origin cocoa beans from Chocolate Alchemy in Seattle, Bondir provides a selection of plain, chocolate, and comte cheese croissants. They’ve sold out every day since their soft-launch on Saturday, Fowler notes. He’s also producing sourdough levain for house avocado toast with Aleppo pepper and Maldon salt, and a ricotta version, with house peach or strawberry-jalapeño jam and toasted pistachios; and the gluten-free shell for Longfellows’ new lemon-curd poppyseed tart.

The café is still serving its egg, kale, and pesto sando and Union Square doughies, too, and on weekends, it offers a rotating choice of house-made scones, like pu-erh tea and chive.