Joanne Chang Is About to Release Her Myers + Chang Cookbook

Learn how to master dan dan noodles, Mama Chang's Pork and Chive dumplings, and other recipes from the South End hot spot.

It’s Fall Cookbooks Week here on The Feed! Check back daily for new recipes and the stories behind this season’s top new releases. 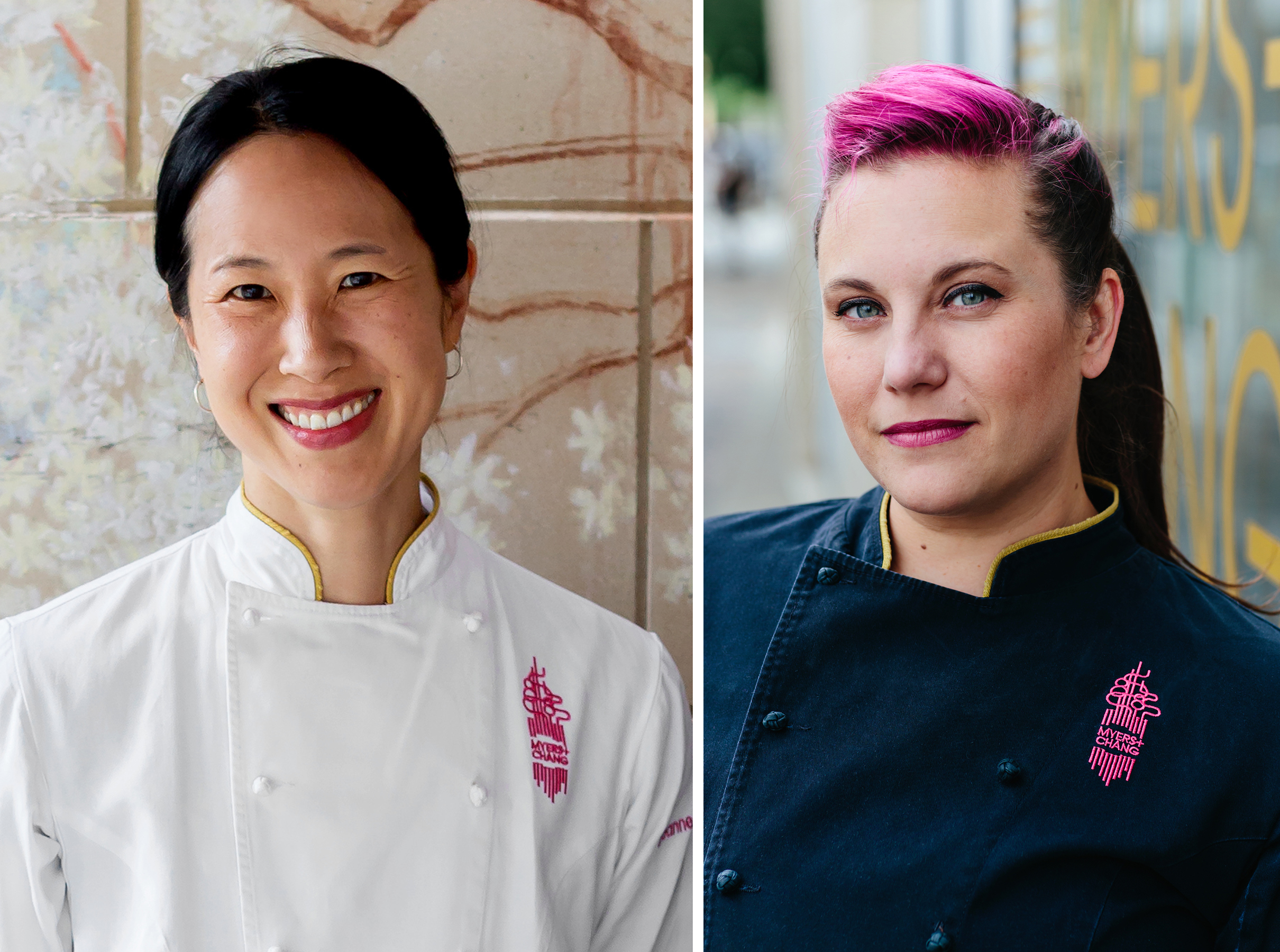 Remember eating in Boston ten years ago? In 2007, Ken Oringer was still slinging tacos La Verdad. Barbara Lynch hadn’t yet debuted her Fort Point dining complex. There were only two Flour locations. And Joanne Chang and Christopher Myers were just about to open a funky Asian bistro in the South End.

Next month, Joanne Chang is celebrating the milestone ten-year anniversary of Myers + Chang in, well, a very Joanne Chang kind of way—by publishing a new cookbook. While her previous books featured recipes from Flour, this one is dedicated exclusively to the pan-Asian flavors of Myers + Chang. Out September 12, Myers + Chang at Home is written in collaboration with the restaurant’s executive chef, Karen Akunowicz.

We caught up with them to learn more about the project.

How did the book come about?

Chang: Well, I actually wanted to write Myers + Chang right after my first book. I fell in love with the whole process of cookbook writing. This was before Karen started [as executive chef]. But then my publisher at the time wanted to do a continuation of Flour, so I did that. I’m actually so glad because I know that we weren’t old enough at that time to have a voice for a book.

Akunowicz: It was a lot of fun. The whole process was new to me. We started a Google Doc, and the outline came together easily. We wanted the book to be designed to be in somebody’s kitchen. We didn’t want it to be a coffee table book. I’d take the recipes I had in the [restaurant’s] kitchen and put them into what I thought was a home recipe format. I’d have people test them, get feedback, edit them, then send them to Joanne. Then she went through the process with her testers and did another round of edits.

How’d you go about selecting the recipes? [see below for two recipes from the book]

Chang: There was a certain group of recipes we knew had to go in—Mama Chang’s dumplings, obviously, and our salmon. And we had a bunch of recipes from Karen’s cooking classes. It’s all stuff that we just love, so we can’t wait for people to make it at home.

Any reluctance to spill your secrets?

Chang: Christopher [Myers, her husband] asks me this all the time. Because the first book is almost everything we make at the bakery in book form. He’s always like, ‘aren’t you worried somebody’s going to steal it?’ I’m like, go right ahead. Because the recipes are the easy part. The hard part is getting all of the people who work for you to make what you wrote down, all in the same way, for ten years. There’s nothing secret to food. You make food to have somebody eat it, not hide it.

Joanne, you’ve become a prolific cookbook writer (this is her fourth book in seven years, and she’s currently developing another baking guide). What motivates you to keep putting them out?

Chang: There’s something about taking something that I know tastes delicious, and that I know we’ve taught other people to make, and being able to teach it. The first book came about because I had opened the second bakery and was no longer in the kitchen teaching people. And I really missed that process. So, writing a recipe and sharing it with people is a way to teach a much broader audience.

Why do think Asian cuisine is sometimes perceived as intimidating to make at home?

Chang: I think people aren’t as familiar with the ingredients. You walk into the [Asian] grocery store and very few things are in English. I think a lot of people are also unfamiliar with some of the techniques that we cover in the book, such as woking and velveting. We had some testers for whom it was their first time woking, and that was really gratifying. Cooking Chinese food is all about these really fresh ingredients, cooking things very quickly, and capturing the essence of whatever it is you’re making. It’s actually perfect for cooking at home.

You write about how the recipes aren’t necessarily traditional or authentic. Why not?

Chang: I think the word authentic is so loaded. People will say that your spring rolls aren’t authentic. And I’m like, authentic to who? My aunt made them, and she’s from Taiwan, and she doesn’t speak any English, so is that authentic enough? There are a lot of recipes that I grew up with that are authentic to me. Chef [Akunowicz] didn’t grow up with many of the things that she’s cooking for us, but the recipes are coming from her, so they’re authentic to her.

Do you think you’ll ever open a second Myers + Chang?

Chang: I don’t know. That’s something we have considered. We talked about it two years ago. We were looking at a space, and then decided to to take a step back and not. Right now we don’t have any active plans.

Akunowicz: There was nothing else like Myers + Chang [in Boston] when it opened. You went to Chinatown. Now, you can throw a stone and hit a restaurant that’s of a similar nature. Asian ingredients like kimchi have become really prevalent. A lot of people know what miso is, and are even using fish sauce at home. It wasn’t like that ten years ago.

Interview has been condensed and edited. 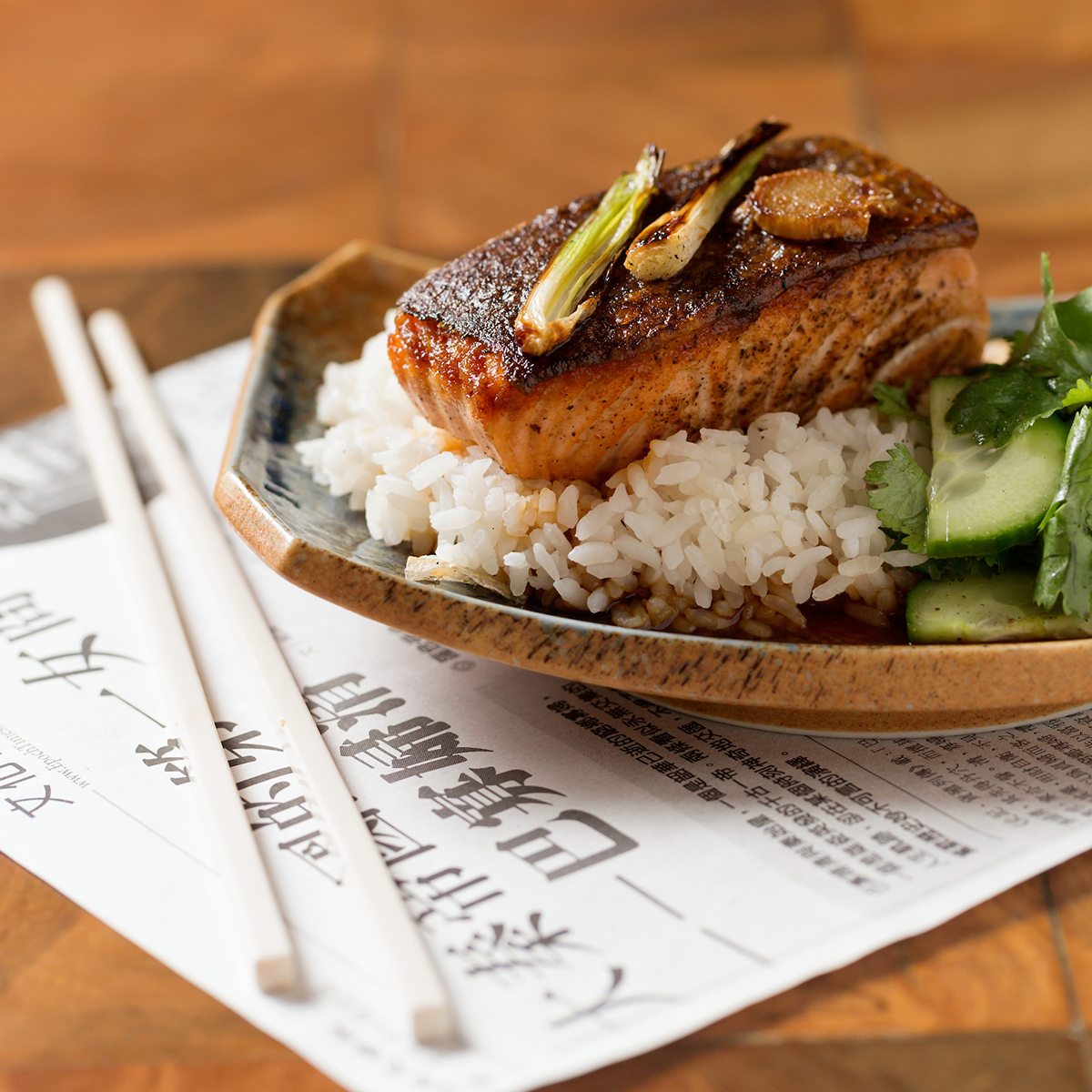 Preheat oven to 325°F and place a rack in the center of the oven.

For the salmon sauce: In a small pot, combine the soy sauce, 1/4 cup of the rice wine vinegar, 1/4 cup water, 2 tablespoons of the sugar, about half of the sliced ginger, and the sriracha. Bring to a boil over high heat, stirring until the sugar dissolves. Turn the heat off and set aside. Sauce may be made up to a week in advance and stored in an airtight container in the fridge.

Place a large flat-bottomed skillet on the stove over high heat. Heat for 2 minutes and then add the vegetable oil. Tilt the pan to cover the bottom evenly with the oil and heat until the oil is almost smoking.
Pat the salmon skin dry with a paper towel. Season both sides of the salmon with the remaining 1/2 teaspoon of salt and the remaining 1/2 teaspoon of black pepper and add to the skillet skin-side down.
Cook on high for 1 minute, pushing down slightly on the salmon to get exceptionally crispy skin.

Use a thin spatula and carefully flip the salmon over. Add all of the salmon sauce to the skillet and sprinkle the scallions and the remaining sliced ginger over the fish and sauce. Place in the oven for 4 to 6 minutes until the salmon is cooked to medium.

Divide white rice into four shallow serving bowls and place one piece of salmon on top of the rice, skin side up. Spoon any remaining sauce, scallions, and ginger evenly onto the salmon and rice.

With a sharp knife, take the stem off of the eggplant and split it top to tail, so that you have two long pieces. Lay the flat side down on the cutting board and cut each piece into 1 inch chunks. Do the same to the rest of the eggplant.

Place all of the eggplant in a large bowl and add the olive oil, ½ cup of water, 1 Tablespoon of Kosher salt, 1 teaspoon of ground black pepper and toss very well with your hands. Transfer into a baking dish (pouring any remaining liquid over the eggplant) or cookie sheet, and place on the middle rack of the oven for 15 minutes. When it is done, the eggplant should be soft, you should be able to prick it easily with a fork.

While the eggplant is in the oven, you can make your stir fry sauce. Combine hoisin, low sodium soy sauce, rice wine vinegar, shaoxing, dark thick soy sauce, and sugar in a heavy bottomed pot. And bring to a boil over medium high heat. In a separate bowl, combine the cornstarch and the ice cold water with a fork or small whisk. Whisk in the cornstarch mixture (called a slurry) into the pot. Simmer while whisking for two minutes, until it is thick, shiny and coats the back of a spoon.