Kristen Kish’s Cookbook Is Out Today

The Top Chef and Menton alum shares her refined, personal spin on cooking at home. 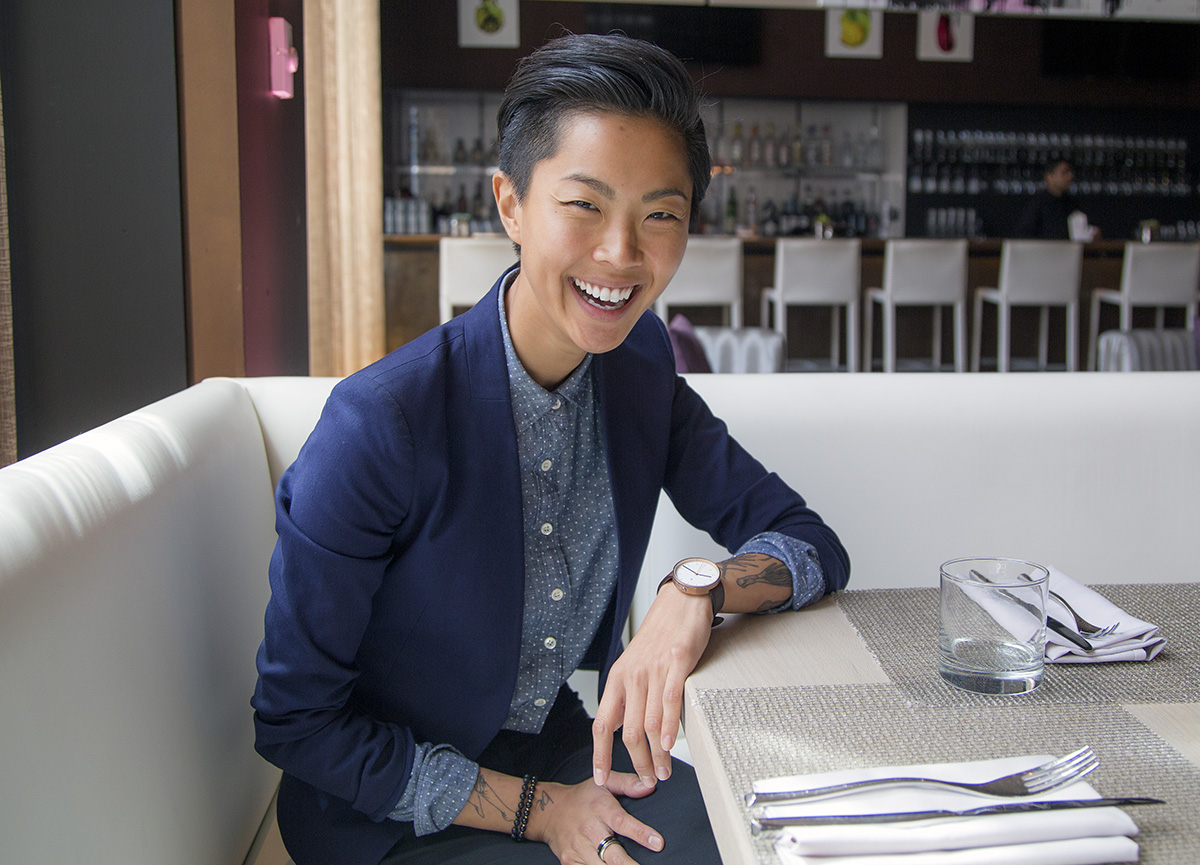 In 2014, after just 9 months on the job, Kristen Kish stepped away from her coveted chef de cuisine role at Menton to become a self-described nomadic chef and media influencer. Her reasons for leaving the Barbara Lynch Gruppo flagship included wanting to explore other career opportunities, learn about herself, and travel the world.

Three years later, the Boston-based Top Chef champ has done all of that—and carved out the time to write a cookbook, too.

“Luckily, books can be written remotely,” Kish says. “My writer [Meredith Erickson] and I had a lot of Skype sessions.” She also tested recipes on the road, experimenting wherever she could find kitchen space.

Instructions for dishes such as lobster with foie gras—ingredients that will look very familiar to Menton fans—are interwoven with thoughtful anecdotes about her culinary career and personal life. She opens up about growing up in the Midwest after being adopted as a baby in Korea, past drug and alcohol abuse, and coming out as gay.

“That all had to go in there,” Kish says. “Once you understand who the person is and who is cooking, then you better understand someone’s point of view on food.”

Her candor is reminiscent of that of her mentor Barbara Lynch. Lynch initially hired Kish to cook at her South End demonstration kitchen, Stir, and then recommended her for season 10 of Top Chef.

“One of the biggest things I love about her [Barbara] is she never tells me what I should or shouldn’t do,” Kish says. “She gives me advice on what she’s gone through, but obviously doesn’t expect me to go in the same path.”

Kish’s current career direction includes putting plans on hold for a restaurant project previously in the works in Charleston, S.C. She declined to elaborate on the decision, but added that she’s still contemplating whether or not she’ll return traditional restaurant cheffing.

“Being a chef these days doesn’t necessarily mean me having a brick and mortar in one city,” she says.

Instead, she’s focusing on what she enjoys most—hosting intimate events, where she can do it all: prep, cook, and socialize. “I’m just kind of popping up in different places,” Kish says.

But she always returns to Boston, she says, even if it’s only for a few days or weeks at a time. In support of her book tour, she’ll be hosting a sold-out dinner at Stir this Thursday.

As for cooking at home, the driven, detail-oriented chef says she’s still getting used to it. “I have a hard time shutting off the mentality of what it’s like to be a chef in a professional setting,” she says. “I still don’t know what it means to have a glass of wine, relax, and cook—it’s not my forte, but I’m working on it.”

8 beef cheeks (about 3 pounds), cleaned of any sinew

Grapeseed or other neutral oil

Note: You’ll need a potato ricer for the potato purée.

5 fresh chives, cut on the bias into ½-inch bâtons

Preheat the oven to 325°F. Season the beef cheeks on both sides with salt and pepper.

In a large Dutch oven, heat enough grapeseed oil to coat the bottom of the pot in a thin layer over high heat. When the oil is almost smoking hot, sear the beef cheeks on both sides until nicely browned, 6 to 8 minutes. Transfer the beef cheeks to a plate. Add the onion, celery, carrots, and garlic to the pot. Caramelize the vegetables and cook until they have slightly softened, 5 to 6 minutes. Stir in the tomato paste and cook until it takes on a slightly darker color, about 4 minutes.

Next add the thyme, rosemary, parsley, and bay leaves. Pour in the wine to deglaze the pot: using a spatula, scrape any brown bits off the bottom of the pot and stir in with the vegetables, then return the beef cheeks to the pot. Add the stock, making sure that the meat is covered by the liquid—add water as needed. Bring to a heavy simmer. Put the lid on the Dutch oven and transfer to the oven. Let the beef cheeks braise for 4 to 6 hours, or until very tender.

Note: The beef cheeks require 4 to 6 hours of braising time, and you also need time to reduce the braising liquid to a sauce. Plan accordingly.

An hour before serving, cook the potatoes: In a large pot of water, combine the potatoes, salt, peppercorns, bay leaf, and thyme, bring to a boil, and then simmer over medium heat. Cook the potatoes until tender when pierced with a fork, 20 to 25 minutes. Remove from the heat and drain. Discard the bay leaf and thyme.

In a small saucepan, combine the cream and miso and bring to a simmer over medium heat, whisking to a blend.

Peel the potatoes while still hot and put them through a ricer and then through a tamis or fine-mesh sieve, using a spatula, into a medium bowl. Add the hot cream mixture gradually, in small batches, stirring with a wooden spoon until you have stiff peaks. Working quickly, while the potato purée is still hot, add the butter, a few cubes at a time and, using a spoon, stir to emulsify. Season with salt and white pepper to taste. Keep warm in a double boiler.

Remove the meat from the pot and transfer to a bowl. Strain the braising liquid through a fine-mesh sieve into a large clean saucepan. Over high heat, bring to a light simmer, turn the heat to low, and gently reduce this liquid, skimming any impurities off the top as it simmers, until it becomes a glaze, 20 to 25 minutes.

Whisk in the butter, a splash of sherry vinegar, and the honey. Add the beef cheeks and cover completely with the sauce.

To serve: In a small bowl, toss the fines herbes together. I trim the cheeks to make straight edges for presentation, but this is optional. In a wide shallow bowl, spoon ¼ cup of the potato purée in the center. Place 1 or 2 glazed beef cheeks on top (if you are serving 2 per person, stack them on top of each other). Sprinkle a generous amount of fines herbes over the beef, along with 3 tablespoons of the beef sauce.