Find bright flavors and vivid local color in one of the Green Mountain State's most touristed towns. 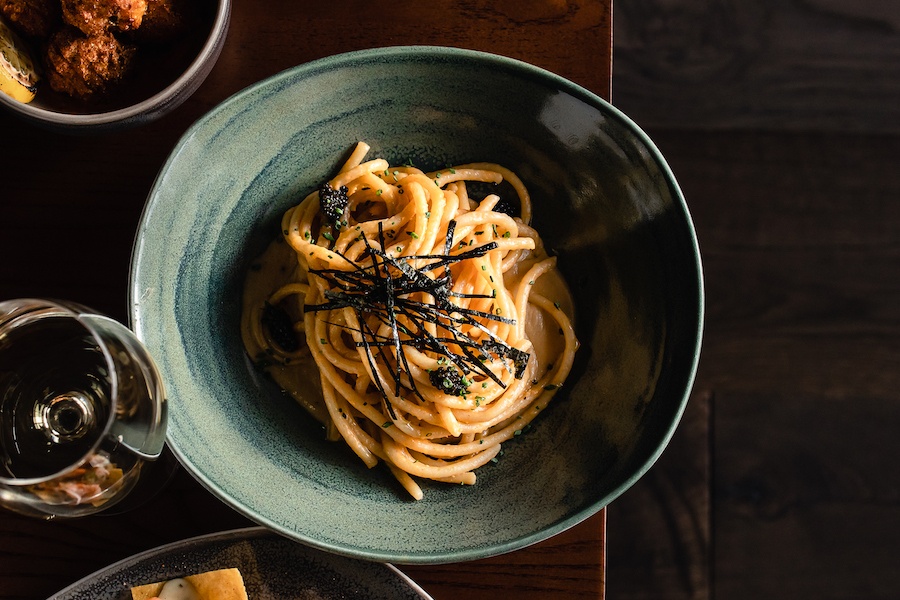 Heading to the one of the most touristed towns in the Green Mountain State? Whether you’re carving up white snow in the wintertime, peeping bright red and orange leaves in the fall, or hitting the hiking paths under clear blue skies in the spring or summer, here’s where to find the best food—and local color. 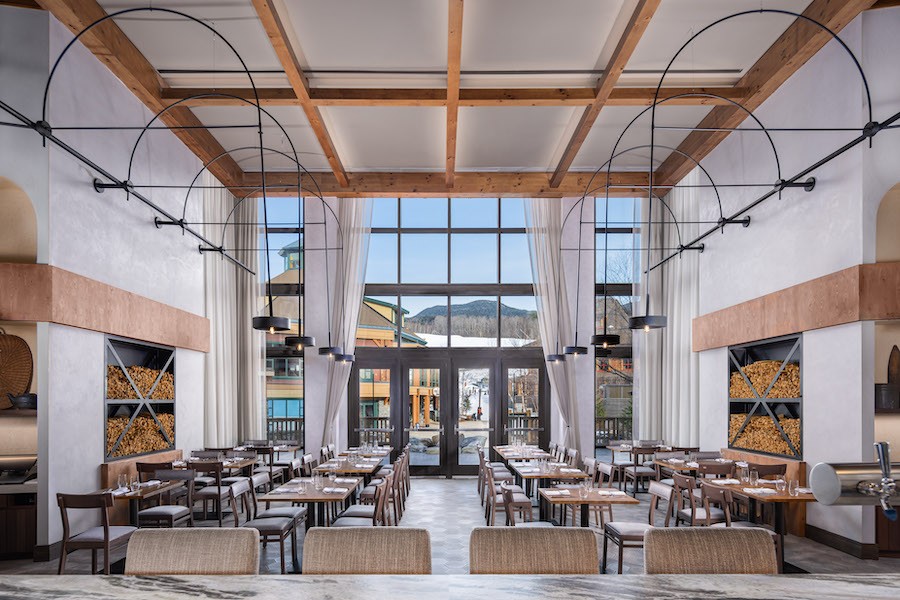 For those of you keeping track at home, we’re actually including 11 restaurants on this list—but that’s because two of them are found at the same ski resort: Spruce Peak, a sprawling slope-side winter paradise thanks to its upscale accommodations, performing arts center, outdoor skating rink, and more. Now, the place is home to a pair of highly anticipated new restaurants: the woodsy-glam-looking Alpine Hall (with its open kitchen, chef’s counter, grand bar, and seasonal terrace), as well as the seafood-focused Tipsy Trout (with its mountain views, raw bar, and coastal cuisine). Chef Sean Blomgren is at the helm of both, turning out hyper-seasonal menus that currently include, say, braised lamb shank with mint chermoula (at Alpine) and uni bucatini with caramelized parsnip, nori, and trout roe (at Tipsy Trout), plus kicky cocktails to boot. 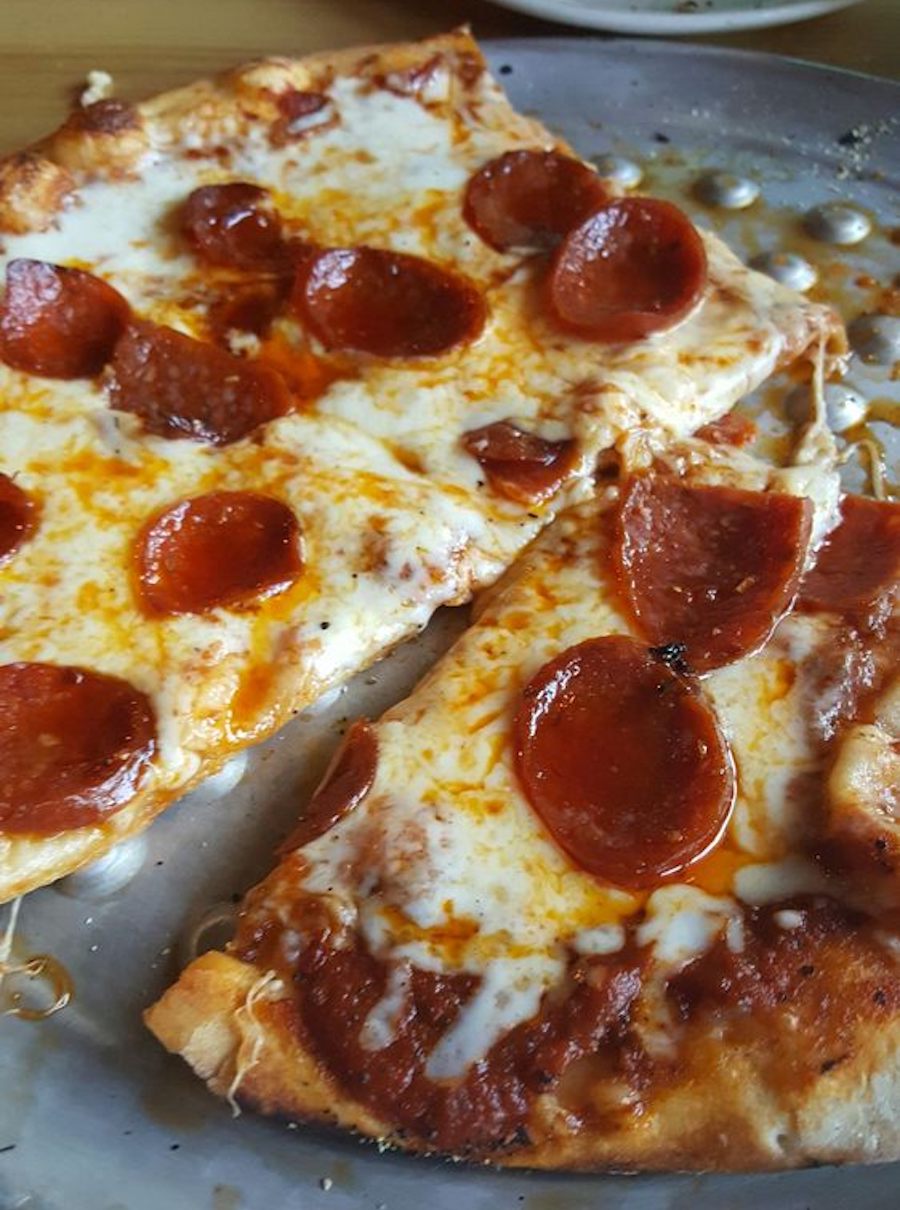 Pizza at the Bench. / Photo by Mary F. via Yelp

After a long day on the slopes, this is the kind of food you’re craving: wood-fired, carb-heavy, rib-sticking comfort fare for refueling, plus superior craft beers—including elusive brews from Vermont’s world-famous Hill Farmstead!—for getting toasty and relaxed. The bright-burning pizza oven turns out great pies (we’re partial to the Cubano, which deconstructs the ham, Swiss, and Dijon mustard-based sandwich), although the sleeper hit is the Buffalo mac ‘n’ cheese, a spicy crock bubbling with Vermont-made Cabot cheddar.

Upstairs: a handful of sweetly appointed guest rooms in the Butler House inn, an 1830-built address in quaint downtown Stowe. Downstairs: Butler’s Pantry, a breakfast-only restaurant beloved by guests and tourists alike for its famous pancakes, drizzled with sweet maple syrup, as well as its biscuits covered in rich brown gravy. It’s a low-key place offering high-quality versions of a.m. standards, where the hot coffee flows—and sometimes, so do the lines, since it’s such a popular place. 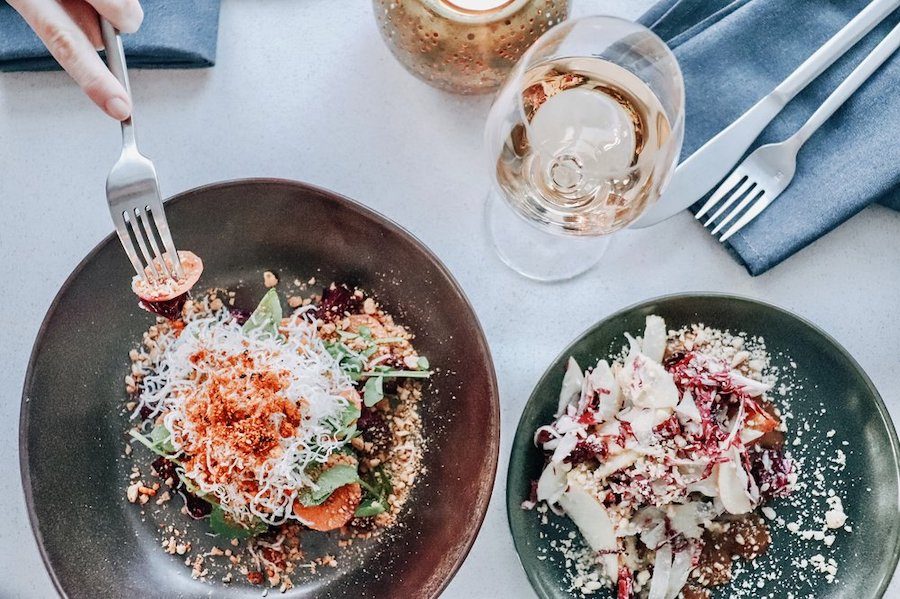 Photo by Cork via Yelp

Only natural wines make it on to the menu—and store shelves—at Cork. You know, the good stuff: small-batch labels from indie vintners whose grapes don’t mess with Mother Nature. Pull up a seat in the dining room, and those globe-spanning pours will accompany equally eclectic, elegant, share-friendly plates, such as steamed mussels in a saffron- and Thai basil-spruced lobster broth. Or just pick up a bottle or two on the shop side to bring back to Boston.

Definitely one of the most popular après-ski hangouts in Stowe, Doc Ponds is a groovy joint from the same team behind a famously fine farm-to-table destination nearby. (More on that in a moment.) Speaking of grooves: Yes, those are shelves of vinyl records lining the wall (and playing overhead), plus colorful snowboards on display. In keeping with the vibe is a menu of meticulously sourced and crafted pub grub—from the sweet potato tacos with blue cheese procured from Vermont’s mythical Jasper Hill, to local pork belly outfitted with orange and pickled red onion.

Dear moviemakers: If you’re ever location-scouting for a quintessential-looking Vermont restaurant, head to Harrison’s. Wood beam ceilings and a lumber-loaded brick fireplace? Check. Decorative displays of birch? Check. Flannel-print banquettes? Indeed. It’s all here, and more importantly, so are special-feeling renditions of American fare, such as pecan-crusted salmon in a maple-mustard sauce, braised short rib with creamy goat cheese polenta, steak tips in a brandy and green peppercorn cream sauce, and more. You eat first with your eyes, but the mouth still matters most.

Hen of the Wood

Stowe has an impressive enough dining scene all on its own, but we can’t fail to mention that neighboring Waterbury happens to be home to a destination-worthy restaurant that helped put Vermont’s contemporary dining scene on the national map: Hen of the Woods, which has earned chef/co-owner Eric Warnstedt multiple James Beard Award nominations since the spot’s 2005 opening. Warnstedt and partner Will McNeil went on to open a second location in Burlington (as well as Doc Ponds in Stowe and, most recently, the barbecue-oriented Prohibition Pig in Sudbury). The original Hen of the Wood is still worth seeking out, though, as a now-legend for farm-to-table cuisine—ribeye for two with grilled radicchio, smoked cheddar, and celery root, perhaps—and craft cocktails.

Vermont has a hell of a craft beer scene: In fact, no trip to Stowe is complete without a trip by the Alchemist’s brewery-taproom to fill up on its famous Heady Topper IPA. When you want great brews with great food, though, while away the hours at Idletyme, where the excellent European-style suds—brewed on site in big copper tanks displayed in the dining room—are complemented by awesome pub fare. Think: ale-battered fish and chips, oversized Bavarian pretzels with hot beer cheese, linguini tossed with Vermont-raised Wagyu, and more. 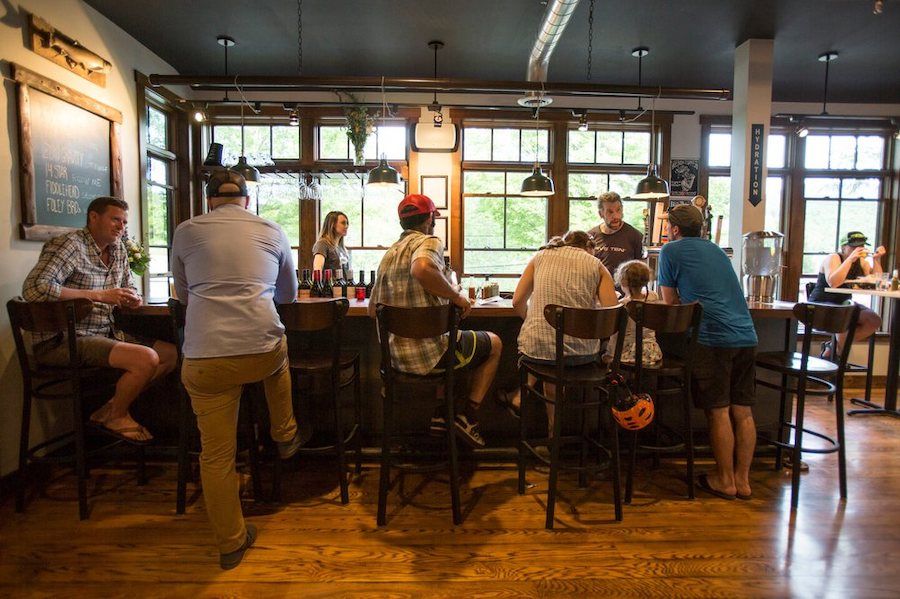 Photo by Ranch Camp via Yelp.

This mountain base lodge is your one-stop-shop for bikes, skis, snowboards, and…burritos? Yes, burritos—as well as tacos, quesadillas, and other creative, mostly Mexican eats. Chef Joe Rock does terrific things with all the south-of-the-border-inspired standards, and puts his own spin on stuff like chickpea “Hippie Fries” with mint yogurt or avocado cream sauce, plus quinoa- and sweet potato-stuffed Portobello mushrooms with balsamic reduction. That you can also rent some wheels or get your backcountry gear tuned up is just the frosting on the milk- and white-chocolate seven-layer cake. 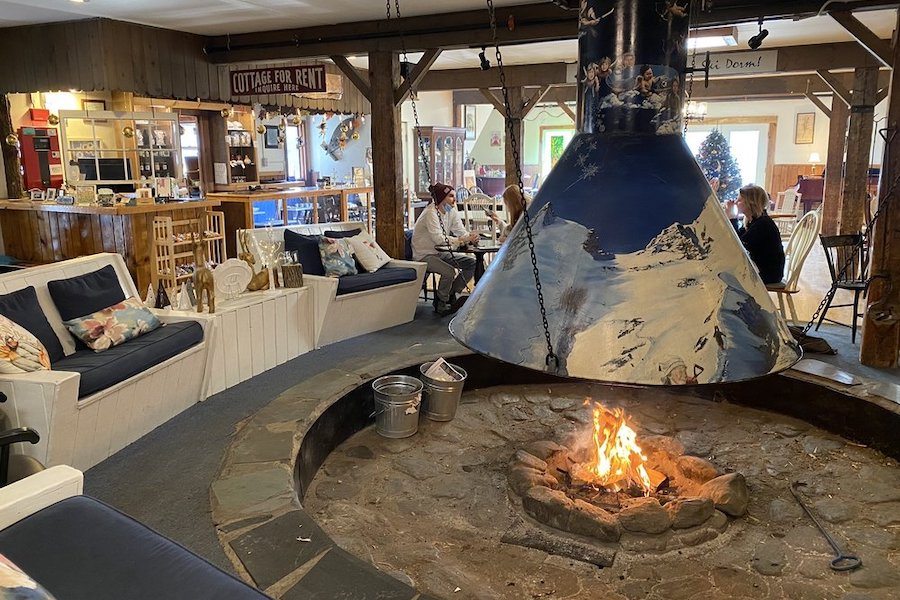 The Round Hearth Cafe & Marketplace

Okay, speaking of restaurants that do double-duty: Swoop over to Round Hearth if you’re in the market for a tasty sandwich and a side of antiquing. The cafe serves a small but lovely menu of simple breakfast and lunch fare—the black bean burger with basil aioli is a standout, as is the sandwich of balsamic blueberries, spinach, and brie. Just about everything else is for sale, too, including the table you’re eating on, because the place doubles as an antique and consignment shop filled with cool curios, vintage furnishings, and bric-a-brac. The only thing you can’t take with you? The round open fireplace, a vestige of the spot’s history as a former ski lodge.