Meet the Ladies Who Lager: A Female-Led Brew Day Is Coming to Boston

Editor’s note: This article was published ahead of the first International Women’s Day brew day in 2018. It’s now an annual event hosted by the Boston chapter of the Pink Boots Society. 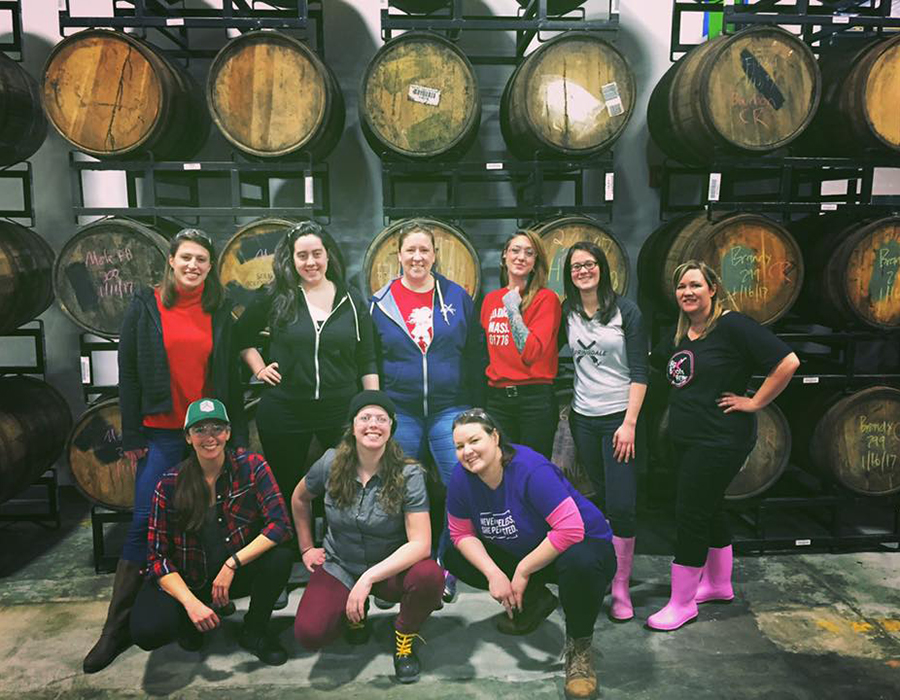 When Maureen Fabry sought to break into Boston’s beer industry in 1999, she “lucked out” working under a female brewer at the bygone Brew Moon in Cambridge, where she had her first apprenticeship. From there, Fabry brewed with Jodi Andrews in the Boston Beer Works company. But from the early ’00s on, she never worked with another female brewer again.

Now she’s the cofounder and brewer at CraftRoots in Milford, which is among more than 20 Massachusetts breweries participating in a national, female-led brew day sponsored by the Pink Boots Society.

The beer-making session on March 8—International Women’s Day—is a fundraiser for Pink Boots, an organization that supports women in beer with scholarships and other educational opportunities. (It’s named for the closed-toe, waterproof footwear brewers prefer to wear in their occasionally soggy working environments.) Breweries can make whatever style of beer they want; the only requirement is to use a proprietary hop blend from the grower-owned company Yakima Chief-Hopunion (YCH Hops). Sales of the citrusy, herbal mix of Simcoe, Loral, Citra, Palisade, and Mosaic hops—the Pink Boots blend—go back to the national organization.

Locally, the brew day is being organized by Boston chapter president Brienne Allan, a longtime brewer at Jack’s Abby who now manages production at Notch in Salem.

The Pink Boots beers will hit draft lines at their respective breweries early this spring. Allan is also organizing tap takeovers with area bars, and potentially even a festival, showcasing some of the beers brewed next month by Massachusetts women.

Allan admits she was shocked at how many other female beer industry employees she has met in the past few months. In December, she helped organize a Brewsters’ Arm Wrestling League meetup. “I thought it would be really hard to find eight women who wanted to participate, and then I had like, 50 people reaching out to me,” she says.

“I had no idea there were so many women in this industry,” Allan continues. “There are a significant amount of women controlling the Mass. beer scene, and no one knows about it.”

Indeed, no one really knows just how many women there are in beer. Katie Stinchon, director of the Massachusetts Brewers Guild, recently inquired with the national Brewers Association for such data, but “sadly they aren’t tracking this yet. They plan to in the future,” Stinchon says.

Her organization doesn’t have numbers on women in the industry locally, either, but “I can say that there is definitely an increase in women-owned breweries,” Stinchon says.

In the past two years, Bone Up Brewing debuted in Everett from cofounder Liz Kiraly and her husband, Jared; Lamplighter opened in Cambridge thanks to Cayla Marvil and cofounders AC Jones and Tyler Fitzpatrick; Bev Armstrong launched Brazo Fuerte Artisanal Ales; Fabry and her wife, Robin, started CraftRoots; River Styx opened in Fitchburg from Jackie Cullen and her husband, Scott; and more. The head brewer at Boston Beer Co. (Sam Adams) is Megan Parisi, and Trillium is a husband-and-wife team. The list goes on.

And it’s not just brewers and business partners. The industries that have sprung up around the craft beer renaissance also have females in charge. For example, both Hadley’s Valley Malt, and Four Star Farms hop farm in Northfield are family affairs. Suzanne Schalow and Kate Baker founded the Craft Beer Cellar retail empire right here in Belmont.

“Lines are still shorter for women to go to the bathroom [at most beer fests],” says Kristen Sykes, laughing.

A longtime beer lover, homebrewer, certified beer judge, and former director of the Mass. Brewers Guild, Sykes founded the Boston Area Beer Enthusiasts Society when she first moved to Boston in November 2011. Now BABES, as it’s called, hosts at least one event per month, welcoming an average of two dozen women (and often, some men) every time.

“When I’m at a bar [these days], women are enjoying beer, talking to the bartender,” Sykes says. “And we’re slowly creeping up to have more women in the industry. But one thing that still remains is objectification and sexism…You still see that around the country.”

Sykes believes that more women in and around the beer industry will mean less gendered disrespect. And some regional businesses have tapped Sykes’ network to help them diversify. She’s often asked to post beer job listings on the BABES Facebook page, and is happy to oblige, she says. (In fact, it was through Sykes that I got my first job in the Boston craft beverage industry: She connected me with Somerville’s female-owned Bantam Cider Company, where I worked in 2014 and 2015.)

The International Women’s Day brewing event will also help beer consumers realize just how many women are around.

“This is about awareness-building,” Sykes says. “Perhaps it mirrors the overall movement of women in the world, through the women’s marches, women running for office. Women are rising up in lots of different fields.”

Fabry has met people, over the last 20 years, “who had a perception that a brewer should be burly and male,” she says. “I don’t see that anymore. I think a large part of that has to do with recognizing where our food comes from. People see women farmers, there are women chefs. There is more of an awareness now,” she says.

Fabry wants to be clear, many men “have believed in me from the start. Never did I feel excluded or unwelcome… quite the opposite,” she says, shouting out Vermont brewer Steve Parkes, who headed up the American Brewers Guild in Davis, Calif., when she studied there; and Berkshire Brewing’s Gary Bogoff, who hired her in 2000.

Exhibit ‘A’ Brewing is a male-owned brewery that’s stepping up during the upcoming Pink Boots brew day. Sykes and Andrea Stanley, the cofounder and maltster at Valley Malt, are co-leading the event, which is open to BABES members (and new BABES members, in case anybody reading this might be interested). 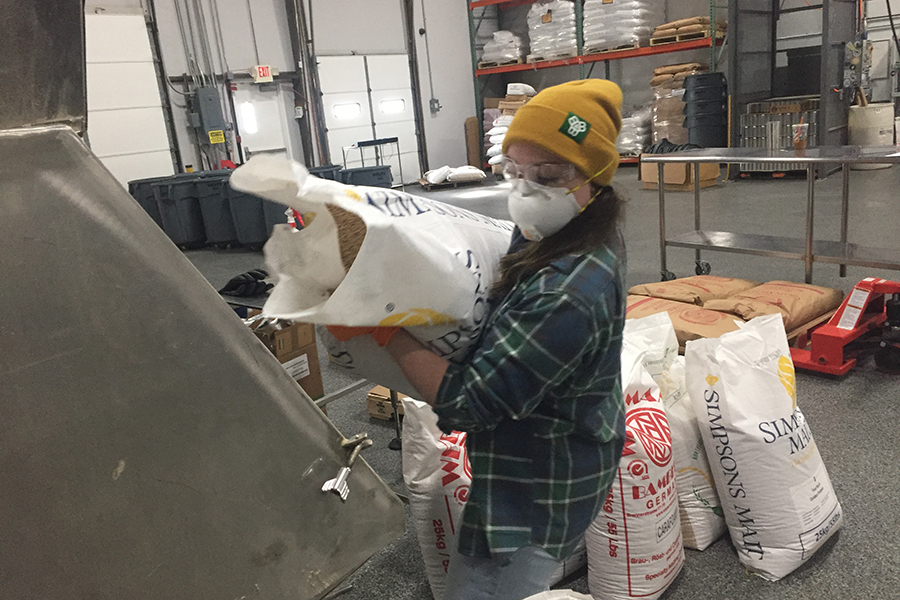 EXhibit ‘A’s Katie Beaucage “malting in” during a past brew day at Exhibit ‘A’ in Framingham. / Photo provided by Exhibit ‘A’ Brewing

The Framingham brewery has three female employees, including one on the production team who will be on the brew deck on March 8. But when Sykes reached out to Exhibit ‘A’ founder Matthew Steinberg and general manager Kelsey Roth about involving the BABES this year, the two men were happy to welcome their friend.

“Both [Pink Boots and BABES] work to make this industry more gender inclusive, so being able to bring these two organizations together and collaborate on a beer was something we wanted to be involved in,” says Roth, who has led a couple educational events for the BABES. “Encouraging more women to get involved in this industry is an important goal for us.”

Besides Exhibit ‘A,’ so far Allan has confirmed 21 other breweries that are making a Pink Boots brew (update: More than double that in 2019). Expect to see IPAs and double IPAs, but breweries can use the Pink Boots blend any way they see fit—from hoppy wheat ales, to pilsners, to kettle-soured saisons.

Most of the beers will be confined to their respective taprooms, but Allan is working on finalizing events for Boston-area drinkers to get to try them all locally. Stay tuned for more details about when you can taste these lady-led beers. In the meantime, here’s a chance to meet some of these women: Lulu’s Allston hosts a party on International Women’s Day with a draft list curated by women in beer, and a special menu by Lulu’s chef Sarah Wade. The event benefits Rosie’s Place, the nation’s (and Boston’s) first women’s shelter.

For more information on the Boston chapter of the Pink Boots and the BABES, follow them on Facebook.