The crusty snow on the ground suggests otherwise, but it really is spring, Boston! We made it! The calendar says so, and so do certain signs. Exhibit A: It’s the final weekend for the Trillium Garden at the Substation, its winter pop-up beer hall in Roslindale. (Sorry, that’s a sad sign of spring. But it hopefully means a redux of the Trillium Garden on the Greenway is in sight.) In other springtime Trillium news, the wine barreled-wild ale Cuvee de Tetreault, released annually on its March 21 anniversary, was spotted on draft this week at Trillium taprooms, the Publick House, and Five Horses Tavern-South End; and its Sprang Kolsch is back in Trillium cooler cases. Other spring flavors to seek out: Early asparagus at places like Les Sablons, Haley.Henry Wine Bar, and the North Shore’s Nightshade; and dandelion root, which Oak & Rowan pastry chef Brian Mercury made into marshmallows to serve with salted maple. Speaking of maple… 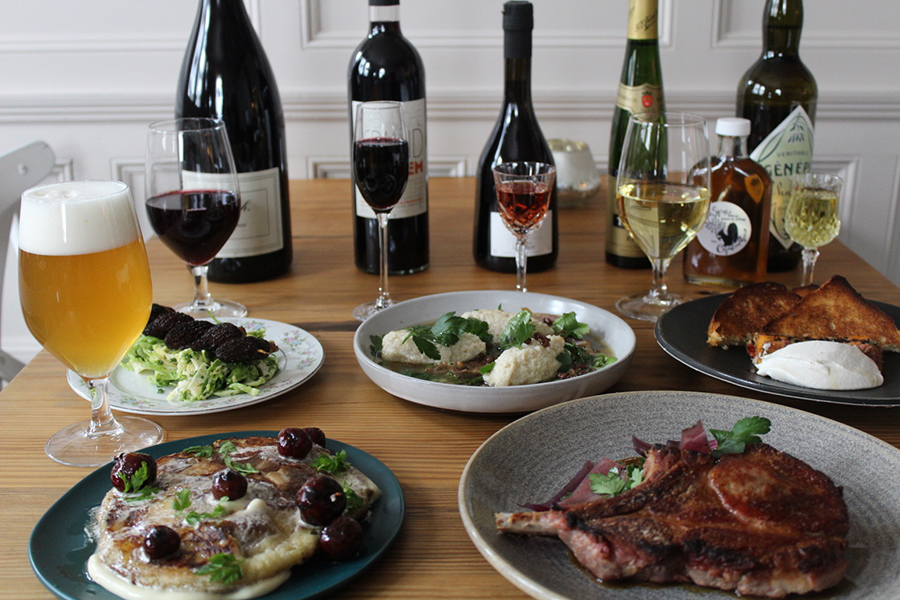 Cambridge’s Canadian outpost, Café du Pays, is celebrating maple sugaring season with special “sugar shack” menu additions through Sunday, April 8. Go for a prix-fixe, or try a la carte dishes like maple-glazed morels on a stick with rabbit and foie mousse; a pancake with maple confit apples and pork belly; sap-brined pork loin; a coffee-cream crêpe cake with rhubarb; and more. The menu will change to highlight new products as the special goes on. Chef Daniel Amighi and team also hand-selected a batch of maple syrup from Botanical Springs for an exclusive, 200ml bottle, on sale at the restaurant for $15. Café du Pays always accepts walk-ins, as well as reservations. 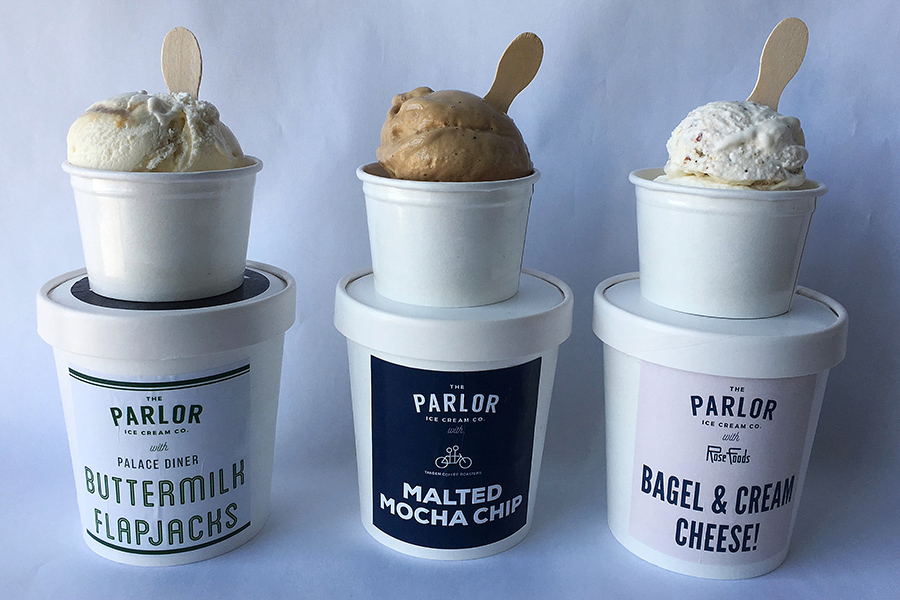 You should have ice cream for breakfast. The one-woman Parlor Ice Cream Co., which was born in Boston but is now based in Portland, Maine, just released a trio of new pints which would be perfect for the first meal of the day. Dubbed the Vacationland series, it’s Parlor’s first-ever collaboration with other local businesses: Tandem Coffee Roasters for Malted Mocha Chip, the Palace Diner on Buttermilk Flapjacks, and Portland’s modern Jewish deli, Rose Foods, for a Bagel and Cream Cheese flavor. Of ice cream. Look for them all inside the freezer cases at Dave’s Fresh Pasta, Pemberton Farms, and both the Cambridge and South End locations of Formaggio Kitchen, starting this Saturday, March 24. The Vacationland series is in chef Jacqueline Dole’s rotation for the next couple of months, so you will certainly have time to catch ’em all. 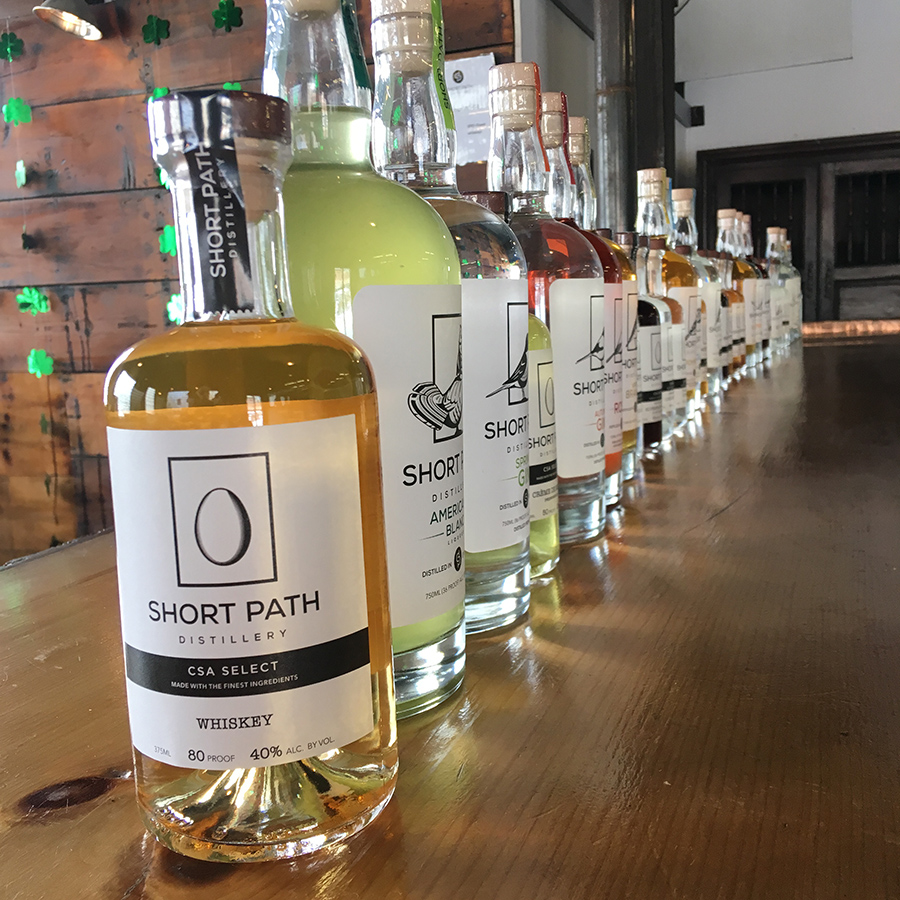 Everett’s Short Path Distillery developed out of the cofounders’ love for Scotch whiskey, but aged spirits like that take time. The team invested in a whiskey still last spring, and the time for whiskey is now. Saturday, to be precise. For this first round, all of the bottles have been pre-sold, but if you didn’t invest ahead of time, there’s still ample opportunity to try the new, brown spirit. Short Path will have a few whiskey cocktails on the menu for the next couple weeks, starting this Saturday: an Old Fashioned (and Old Fashioned flights!), a Whiskey Sour, and the Golden Rose, a house-concocted blend of whiskey, Short Path Rosid (a hibiscus-lemon rum), raspberry, lemon, and a splash of soda; and samples will also be sold for $3.50. Whiskey calls for a party, so there will be live music, Miguel’s Empanadas and Manoa Poke in the house, and more fun. 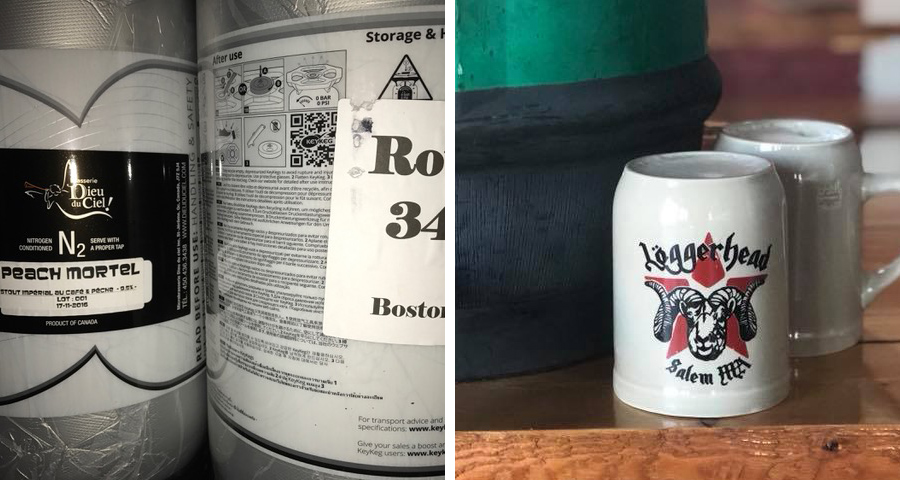 It’s the final chance to check out the Trillium Garden at the Substation, as previously mentioned. It’s also that time of year when Montréal microbrewery Dieu du Ciel! unleashes its beloved imperial coffee stout, Péché Mortel—“mortal sin”—at beer bars around the world. Row 34 is the only Boston-area spot tapping the 9.5-percent dark beer this Péché Day, plus variations including a bourbon barrel-aged version, one aged on raspberries, a creamy “latte” version brewed with lactose, and more. Another high(er)-ABV happening: Salem brewery Notch, whose entire lineup is typically sub-5-percent “session” beers, is making an exception this weekend with a Munich-style Starkbierfest (Strong Beer Fest). Karl’s Sausage Kitchen is helping fuel the celebration, with Notch Dortmunder rost bratwurst, beer-cheese soup with pretzel croutons, Karl’s traditional frankfurther on rolls, a liverwurst appetizer, and potato salad. There will be more food, oom-pah music, and more fun, plus half-liter pours of Notch’s Loggerhead Doppelbock and other Bavarian lagers. The door fee comes with a custom mug, so get there early.