From the helm of his new floating oyster bar, restaurateur Charlie Larner is aiming to reshape the city’s waterfront. 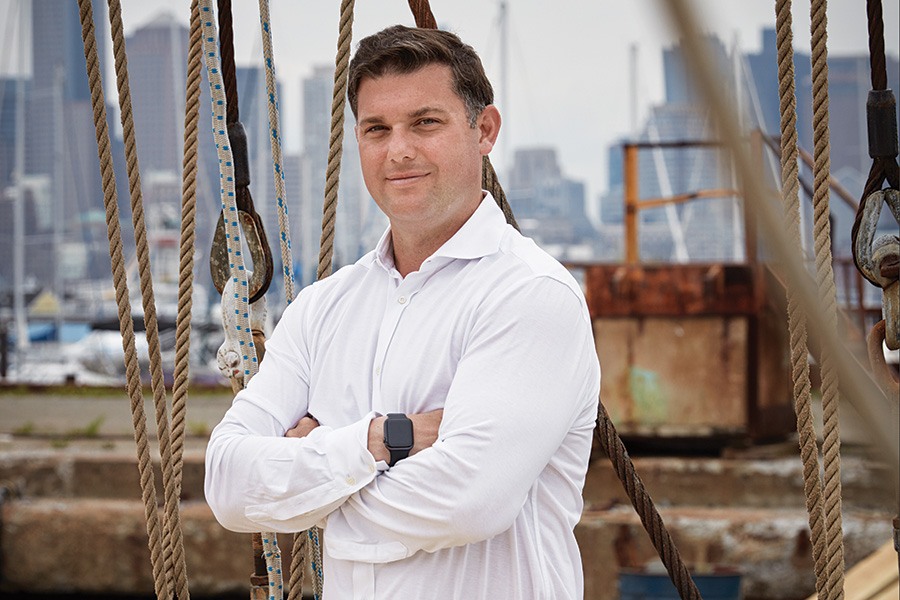 Even as he prepares to launch a restaurant on a tall ship, Charlie Larner is plotting future projects—including Reelhouse Oyster Bar, a fast-casual spinoff of his growing seafood brand. / Photo by Jim Brueckner

Launching a restaurant in the middle of Boston Harbor is certainly no tea party, but Charlie Larner’s next bold venture is still pretty revolutionary.

Next year, the ambitious 39-year-old restaurateur will open Sailor’s Oyster Bar, an extremely rare restaurant on a tall ship. It has all the makings of a landmark: The 245-foot Caledonia will seat about 300 people on its main deck, serving in its first season lobster rolls, freshly shucked bivalves, and other mostly raw-fish fare alongside cocktails poured at a massive bar covered by awnings made from sails.

It’s been quite a journey—for the ship and its now-owner. Caledonia was tugged from Toronto to Boston Harbor, where it sits at dry dock waiting to make good on Larner’s signature goal: getting more people to eat, drink, and play on Boston’s waterfront. “I think our harbor is underutilized,” says Larner, who’s been making a splash along the urban coastline since linking his first seaside restaurant—the cool-crowd-baiting Pier 6 in Charlestown—to his second, East Boston’s Reelhouse, via a free water taxi that transports up to 40,000 people annually.

Guided by past-career experience managing hospitality-related funds for a private equity firm, Larner continues to focus on opening “tourist and waterfront” destinations around the area. At least, that’s what he tells me in June as he’s overseeing the final touches on yet another sprawling project: a second Reelhouse in Quincy’s Marina Bay. The nautical-themed eatery is outfitted like a yacht club for pretty young things, with expensive boats bobbing in the water outside the wide-windowed walls. Among them will soon be yet another water shuttle, helping city diners bypass traffic from a pickup point in South Boston.

As it turns out, creating buzz around the harbor is a mission Larner shares with the city itself: Supporting an “active waterfront” is a major element of the Imagine Boston 2030 plan developed by the mayor’s office. Larner’s new tall-ship eatery is one of three community-engaging proposals for the Charlestown Navy Yard approved by the city in March. If he succeeds, it’ll bode well for similarly transformative ideas he’s considering for Provincetown, Nantucket, and beyond.

“Who doesn’t love the water?” Larner asks rhetorically back at Reelhouse as the Beach Boys’ “Kokomo” plays overhead. I’m hard-pressed to answer. More important, and luckily for Larner, the water is loving him right back.

Editor’s note: This post was updated September 19, as a Navy Yard Hospitality rep says “red tape” is holding back a previously anticipated summer 2019 opening until next year.