Head to these local spots for the tasty fall staple before the season ends. 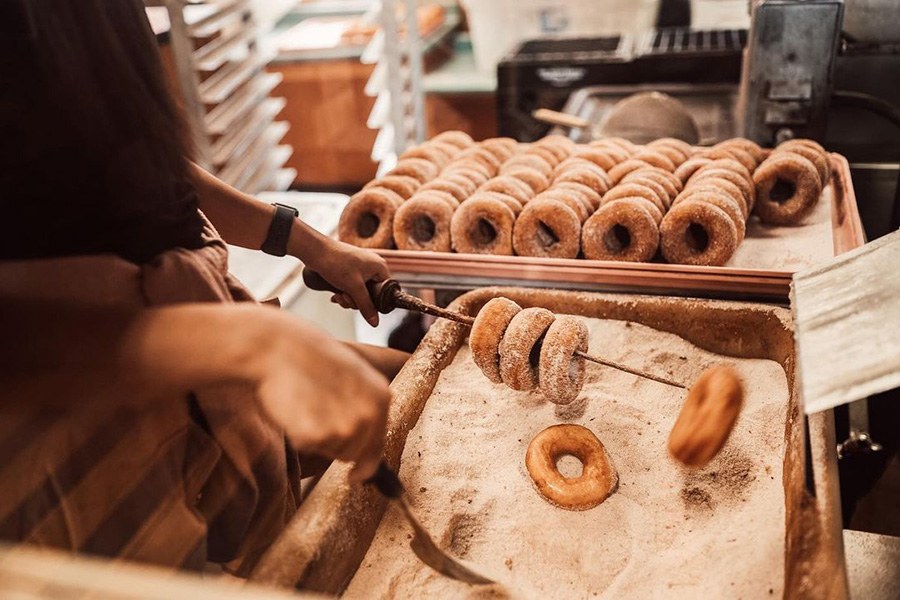 The weather might be getting colder, but apple cider doughnut season isn’t over just yet. Of course, you can find the quintessential New England fall staple at restaurants and doughnut shops in the city, but nothing compares to having one fresh out of the fryer at a farm stand or apple orchard. Lucky for us, there are a few just a short drive from Boston. Take a trip to the suburbs for cinnamon-sugar-coated goodness, loaded cider doughnut sundaes, sprawling farm vistas, and the comfort of locally made baked goods. Take it from us, you’ll want to grab a dozen.

Among other fall necessities like apples, pumpkins, pies, and hot mulled ciders, Brooksby Farm’s coveted apple cider doughnuts are regularly available until Thanksgiving. (And the farm makes them sporadically until Christmas, too, so you might get lucky and find a fresh batch if you stop by.) Have them plain, or, if you have an extra-large sweet tooth, shake them with some cinnamon sugar. 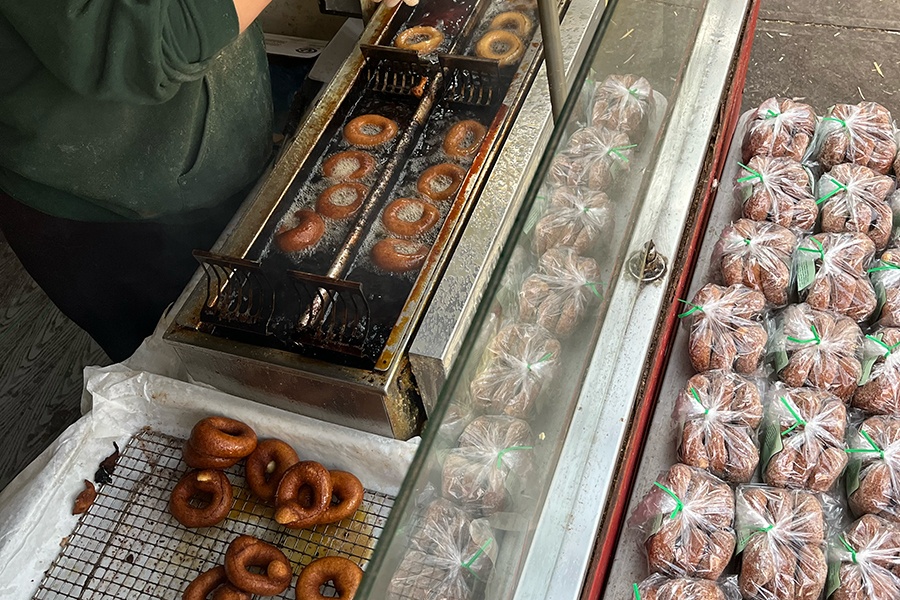 Cider doughnuts being made at Calareso’s. / Photo by Makena Gera

Fresh baked treats are Calareso’s specialty, but nothing else is quite as delicious as its apple cider doughnuts. After grabbing a bag of six mini doughnuts (and watching them being made right outside), head next door to Cal’s Creamery to get a seasonal apple cider doughnut sundae—made with a scoop of vanilla and a scoop of apple crisp ice cream and topped with caramel sauce, whipped cream, and Calareso’s cider doughnuts, of course. Trust us: It’s worth the drive to the ‘burbs.

Admire the foliage along 95 as you drive north to Amesbury to enjoy Cider Hill Farm’s traditional hot apple cider doughnuts, made with sweet apple cider, until mid-December. Also available: pumpkin and gingerbread whoopie pies, assorted coffee cakes, and cookies. Don’t pass up the hard cider—it’s made with fruit that is grown, harvested, and pressed on Cider Hill’s 145-acre farm. 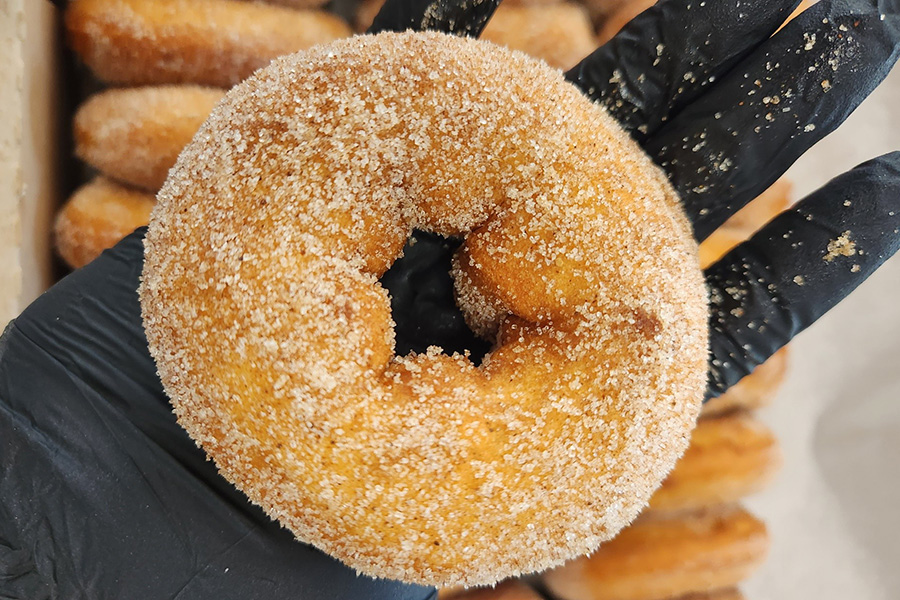 The baked goods at Mann Orchards are top-notch, as is its selection of local craft beer, cider, and produce. But the Methuen farm stand’s biggest draw? Its sugary apple cider doughnuts, which are a fan-favorite in the Merrimack Valley. They’re available on Saturdays and Sundays until Halloween, so there’s still time left to get your fix.

Just south of Boston by the Blue Hills Reservation, you’ll find Pakeen Farm, which serves up mini apple doughnuts every day through October during the fall harvest season. If you don’t get enough this fall, head there during Christmas to munch on some while picking out your tree. 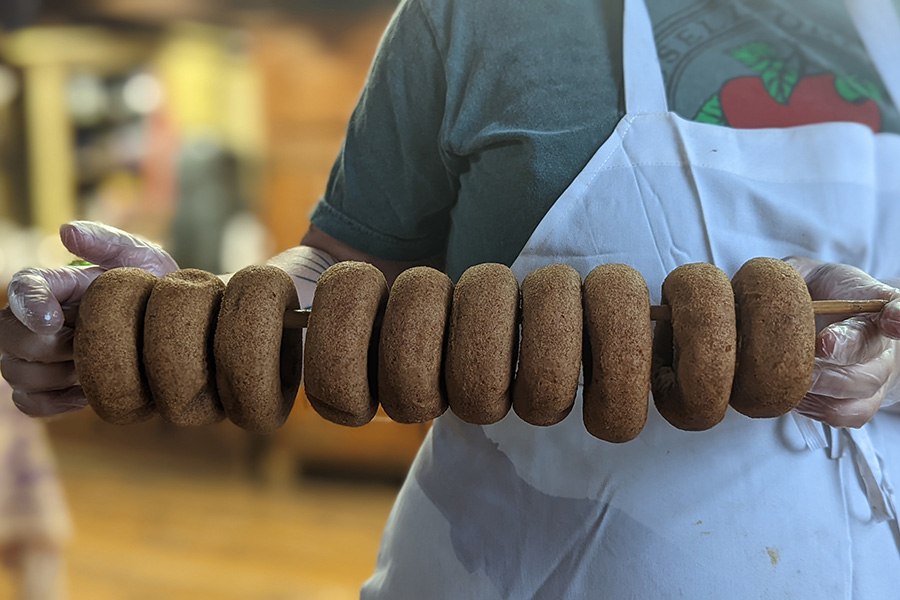 Just a short drive from Boston, this family-owned, 120-acre farm in Ipswich makes dairy- and nut-free apple cider doughnuts from scratch every day using its own fresh-pressed cider with Russell Orchards apples. An added bonus: Little ones (and adults) can watch the doughnuts being made inside the bakery from the viewing platform in the farm store. Stop by anytime before it closes for the season the Sunday after Thanksgiving. 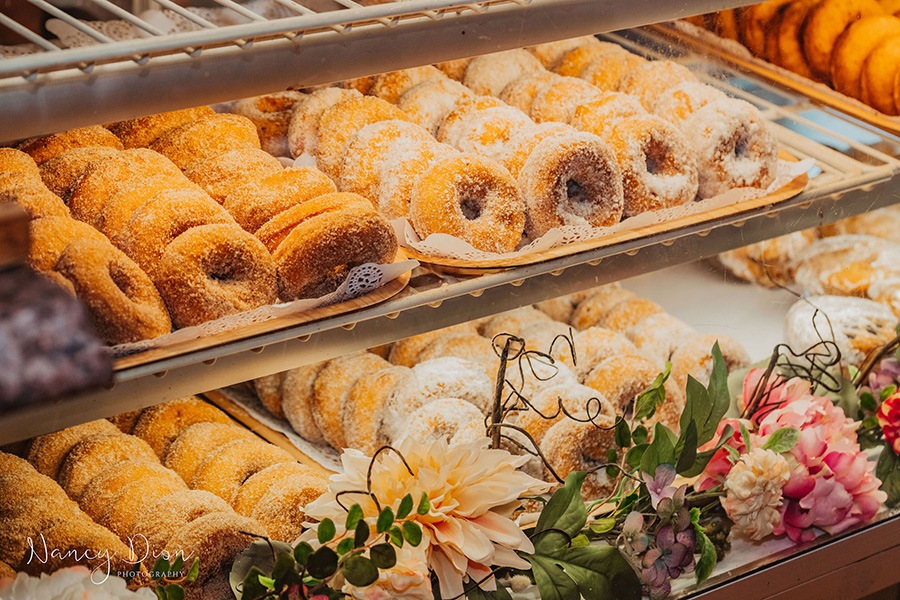 A case of doughnuts at Smolak Farms. / Photo by Nancy Dion Photography

A north-of-Boston mainstay for apple picking (and a working farm for 300 years), Smolak Farms sells thousands of apple cider doughnuts a day during peak season. But have no fear, they’re on sale year-round, too. Just step into the farm stand, and you can smell the sugar-cinnamon-coated treats right away—maybe even from down the street. We recommend getting a full dozen. 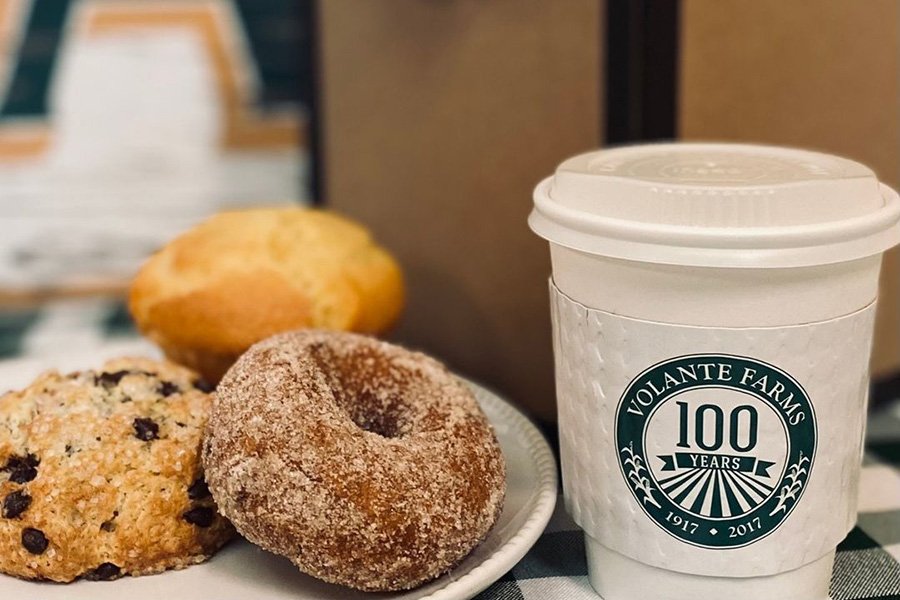 Grab coffee and a doughnut at Volante Farms. / Courtesy photo

Who says cider doughnuts can only be eaten in the fall? Not this farm stand in Needham. Volante Farms is another spot that serves them up year-round. Couple its delicious doughnuts with local coffee from Upton-based Red Barn Coffee Roasters and a freshly made sandwich from the cafe, and you have yourself a hearty meal perfect for winter, spring, summer, or fall.