A Florida Alligator Wrangler Is Opening a Barbecue Restaurant in Quincy 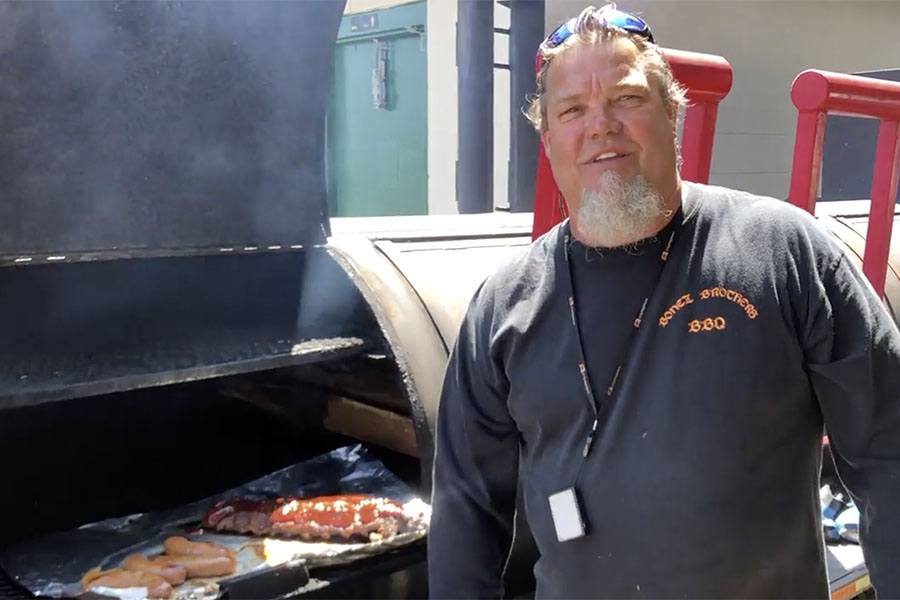 The South Shore is getting a little more southern this summer: Bonez Brothers BBQ is about to open a restaurant in Quincy, bringing a takeout-focused menu of Southern barbecue classics to the Southern Artery—as well as a robust selection of alligator delicacies, thanks to ’gator hunter-turned-chef and pitmaster, Todd Noon.

Bonez Brothers BBQ has been on the Massachusetts catering scene for several years, and is a regular vendor at farmers markets around the South Shore. Along with slow-smoked baby back ribs, beef brisket, and pulled pork, Noon is known for specialties like smoky alligator sausages and ’gator jambalaya—thanks to Noon’s lifetime of wrangling alligators.

His restaurant in Quincy will add ’gator tail and ’gator fritters to the menu, and other Southern favorites, like deep-fried key lime pie, Noon says. It will also feature Bonez Brothers’ signature “Love in a Cup:” A 16-ounce red Solo cup, layered with pulled pork, barbecue sauce, collard greens, beans, and coleslaw, topped with a pickle and drizzled with more barbecue sauce.

Besides hunting ’gators, Noon has been in the culinary business for decades. He was the head chef and dietary director for a group of assisted living facilities in Florida, and he got into the competitive barbecue circuit in the 1990s with a Naples, Fla.-based team called Michelbob’s. He also owns a hop farm in southern Florida.

Headed for a former Papa John’s pizzeria, Bonez Brothers BBQ will be equipped with a custom-built hardwood smoker, and the interior walls will be decorated with taxidermic alligators Noon has bagged over the years. The shop will be mostly for takeout, but it will have standing counter inside for casual dining in.

Bonez Brothers is on track to open in about two weeks, Noon says, and it will begin with hours on Monday, Tuesday, and Thursday to start, before ramping up service to five days per week. In the meantime, catch the alligator hunter behind Bonez Brothers BBQ in pop-up form every Friday through mid-November at the Quincy Farmers’ Market, and Saturdays through mid-September at the Attleboro farmers’ market.