One of Boston’s top chefs launches a fourth South End restaurant. Can he keep the hits coming? 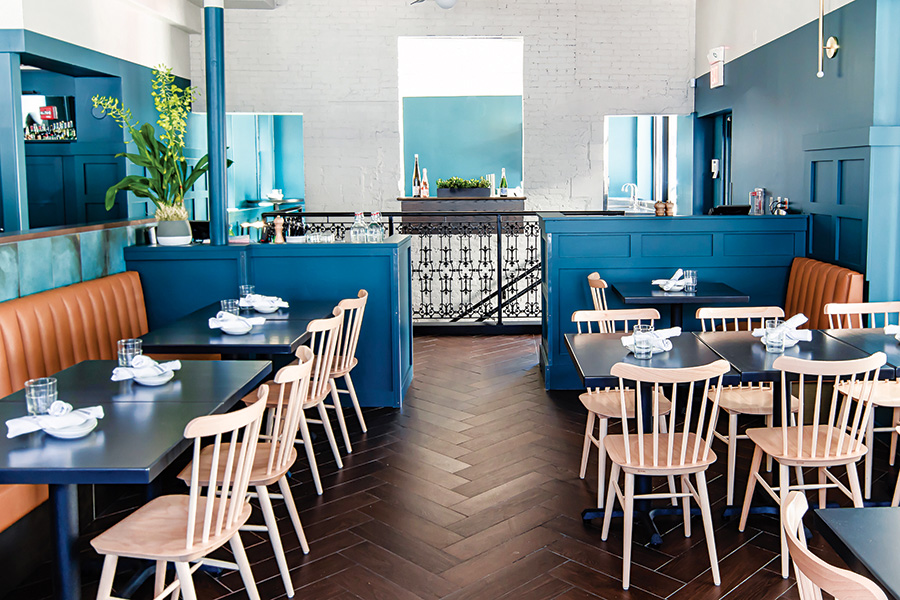 The most memorable experience I had at Black Lamb, chef-owner Colin Lynch’s highly anticipated fourth project in the South End, involved shot glasses and free booze. I was tucked into a velvety leather bar seat when the bartender noticed my dining mate and me chatting about an upcoming birthday; to celebrate, he poured four gratis shots of bitter, malty amari—one for each of us, including himself and an amiable server at his side. A complimentary drink for a special occasion is a delightful gesture unto itself. But that our bartender thought to include his team taught me much about the inviting spirit of Black Lamb: This digestif wasn’t just to commemorate the end of a happy dinner—rather, it was offered as a small act of shared celebration, one that makes clear Black Lamb’s ambition to be a comfortable, friendly neighborhood spot. Given all of the hype surrounding the restaurant’s opening, that’s a pleasant and humble surprise.

I say hype because Lynch has already garnered wide acclaim—and buzz—in Boston. For more than a decade, he served as executive chef of Barbara Lynch’s restaurant group (the shared last name is a coincidence); later, he moved on to the critically laureled sushi parlor O Ya. But Lynch stepped firmly into the spotlight in 2016 with his debut solo venture, the swanky coastal-Italian gem Bar Mezzana. He subsequently expanded his small South End empire with Shore Leave, a modern tiki bar reminiscent of an upscale, hyper-Instagrammable Trader Vic’s, as well as its restaurant-within-a-restaurant, No Relation, a speakeasy-style sushi counter. 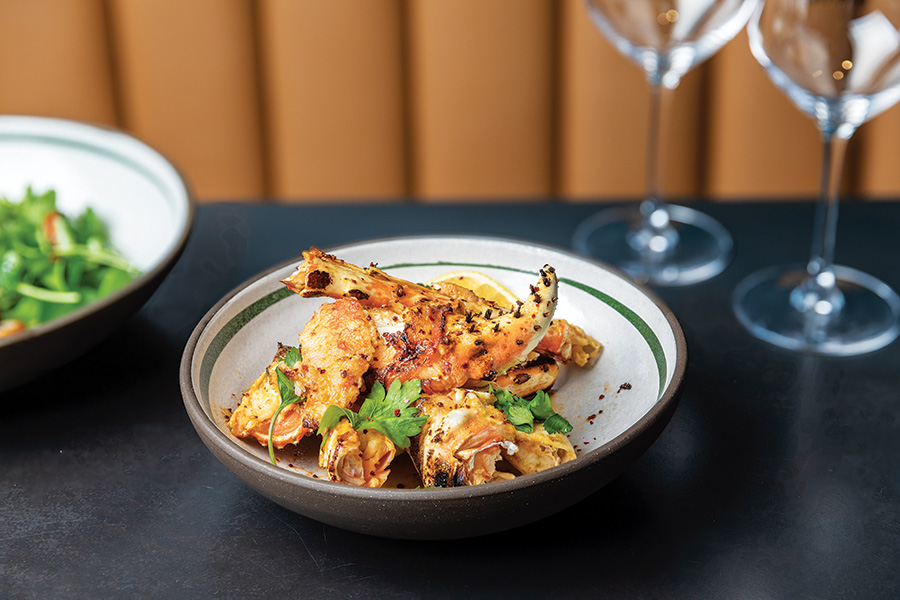 The still-nascent Black Lamb, meanwhile, is a quieter oasis than its siblings, unclouded by flash or fanfare. Here you’ll find expert riffs on deeply comforting, produce-heavy American brasserie fare, buffed around the edges with smatterings of fresh herbs, bright accents of citrus and vinegar, and peak-season ingredients that fuel an ever-changing menu: see the Jonah crab Louis ($14), which on one fall evening featured silky picked crab meat spooned, generously, over juicy nectarine cheeks, avocado, and a tumble of green and purple microgreens.

In fact, the menu’s many seafood offerings are especially strong across the board, starting with the pristine raw-bar selections. Sparkling oysters ($3), shrimp cocktail ($3.50), and caviar service ($45) called to mind old-school steakhouses, and paired well with mouth-gripping homemade salt-and-vinegar potato chips ($4). Mussels ($18), meanwhile, were some of the chubbiest and most succulent I have ever dived in to, loaded into a deep bowl with brothy Pernod butter and a flurry of scallions. Not everything worked: I wasn’t a fan of the thick, overly creamy brown-butter-mayo dressing that masked the sweet meat of a cold lobster roll ($25). But I let that go easily after the first spoonful of a butter-yellow corn bisque ($14) with vadouvan spices and hunks of lobster—it was my favorite dish on the menu, though with heavy competition from the roasted king crab legs ($36 for a half pound; $65 for a full pound), their tender meat glowing with licks of burnt-orange chili butter.

Larger plates, including those that veered back to land, continued the riff-on-a-classic theme—with mostly lovely results. Duck-breast frites ($28) balanced the fatty flush of medium-rare meat and rich, orange-scented béarnaise with an herbaceous tangle of parsley salad. There is—appropriately for an American brasserie—a very good cheeseburger ($16), dressed up with caramelized onions and a seeded brioche bun offering that proper squish reminiscent of the Wonder Bread era. Roasted cauliflower florets ($14), on the other hand, were on-trend for 2020—as well as pleasantly al dente, darkly burnished, and armed with bracing accents of grapefruit and white anchovies.

If I have any beef with Black Lamb, it’s that some of the left turns risk crossing the fine line between welcome surprise and uninvited blindsiding. The shatteringly crisp, wafer-thin toast smeared with goat cheese in a well-dressed mixed-greens salad ($13) wasn’t described on the menu; neither was the thick swath of yogurt beside the luscious poached salmon. These were (undoubtedly tasty) main components of their dishes, but neither would be naturally anticipated or necessarily welcomed by a diner—especially, say, one with a dairy allergy. By the time I noticed the good yet unexpected hummus-like spread beneath the lunch menu’s chopped salad with poached chicken breast ($18), I wished the menu might sacrifice a bit of brasserie-style brevity for transparency. 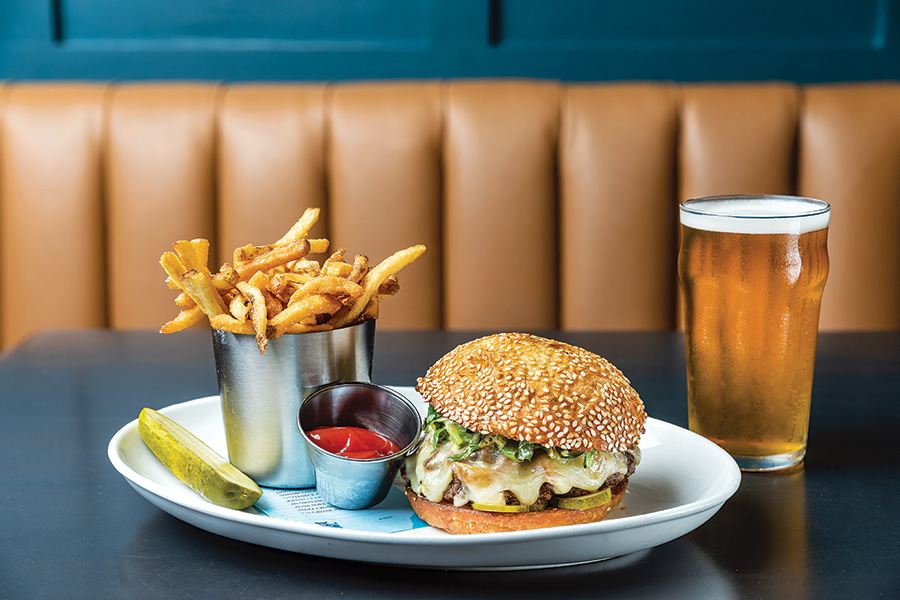 A juicy burger is a standout at Black Lamb, a familiar-feeling American brasserie. / Photo by Joe Greene

Uniformly gratifying surprises, meanwhile, await from pastry chef Christina Larson, who mingles nostalgia with high-wire technique. I’m looking at you, 17-layer chocolate cake ($7), a rich slice of iconic sentimentality that’s more refined and more bittersweet than you might remember, but just as plain good as you want it to be. The pie of the day à la mode ($9), packed with jammy late-season peaches on one visit, was delightful, its crust worthy of the family-recipe Rolodex and the flawless orb of vanilla ice cream updated with a kick of salt. Fresh lemon sorbet ($10) sparkled alongside a post-meal espresso ($3.50); it’s offered with or without a float of ice-cold vodka.

That spirit emerges again in one of the more memorable entries on the cocktail menu: an “amped up” dirty martini ($12) threaded with olive oil and black-pepper vodka. Smooth and briny, the libation reflects beverage director Ryan Lotz’s knack for 21st-century spins on 20th-century stalwarts. Under his leadership, in fact, the bar continues Black Lamb’s updated-American-brasserie approach, highlighting classic (yet finely refurbished) cocktails alongside glass pours of esteemed grapes from smaller, lesser-known wine producers, as well as frothy drafts of hyper-local New England brews.

But here’s the thing about Black Lamb: Aside from the inspired food and drink, days after my aforementioned pre-birthday visit, the things I remembered most were that convivial post-dinner communal toast and overall “invite-the-neighborhood” vibe. For an American brasserie doubling as a suave and familiar local watering hole, that’s a high compliment—and reason enough to return again to raise a fork, and a glass.