Restaurant Review: Orfano Is a Triumphant Modern Take on Italian from Tiffani Faison

A powerhouse chef rolls out a cunning (re)vision of red-sauce Italian for the Roaring 2020s. 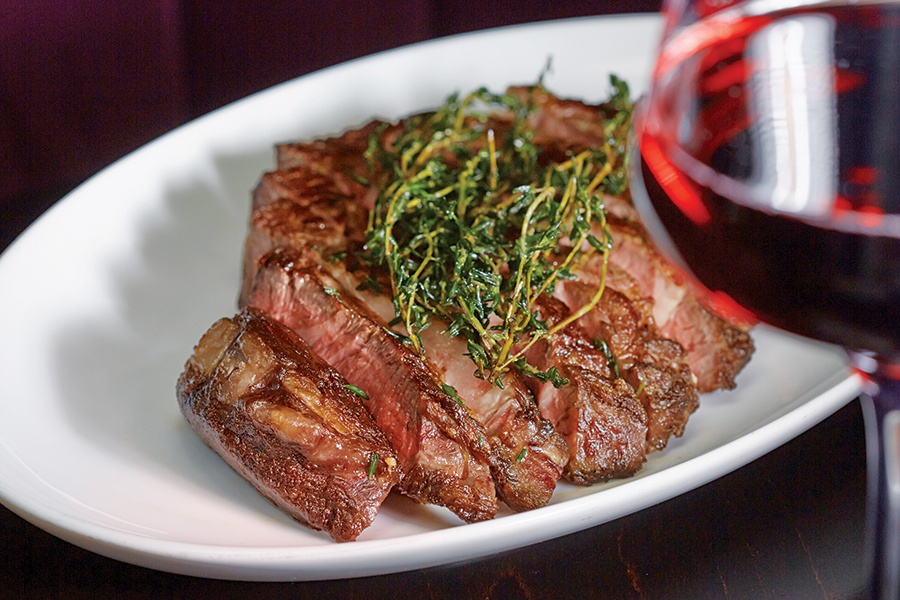 The latest Tiffani Faison production is up and running, folks, and if you’ve caught any of the star chef’s string of Fenway hits—her valentine to southern barbecue (Sweet Cheeks), her Southeast Asian travelogue (Tiger Mama), her glitter-and-gimlets snackerie (Fool’s Errand)—you have a decent idea of what you’re in for. There will be ambitious food and drink, opulent staging, and moving parts galore, plus a dash of edgy sass. Every Faison venture reminds me of a Broadway show plucked from some gritty East Village workshop that somehow preserved its indie sensibility despite the fancy new budget.

This time around, Faison has laid her Midas touch on throwback Italian-American dining. And that’s not referring to the balsamic-glazed North End joints phoning it in from the ’90s with tourist-grade chicken Marsala. Orfano harkens back much farther: to the upscale Italian steakhouses that flourished in the mid-20th century, like the original Palm in New York or Chicago’s Gene & Georgetti. Fans of Faison’s Rocca days—that brief period in 2010 when she cooked extraordinary modern Ligurian for a dining public still not quite hip to pasta portioned as a modest midcourse—should appreciate the irony that her long-awaited return to the genre would be a Rat Pack–era period piece.

Once you start kicking the tufted cushions on Orfano, however, it becomes crystal-clear how thoroughly modern millennio a revival it is. Let’s start with the dining room, which riffs on the source material but doesn’t bada-bing you in the face with it. Servers in faux-tuxedo T-shirts breeze by with platters of broiled clams and hulking veal chops, hoisting pepper mills the length and girth of souvenir Sox bats over regulation-size Caesar salads. A gent in a houndstooth jacket spritzes martini rims with one of the vintage atomizer bottles on his rolling bar cart, then prams along the zigzag print of the midcentury-mod-ish carpet to the next aubergine-velvet banquette. On the wall, a portrait of Lady Gaga, her face full of spaghetti, peers down from on high. Restroom doors outfitted with old-boys’-club-style nameplates bear eponyms of modern feminist icons, a friendly but firm reminder to leave any toxic masculinity at the door. 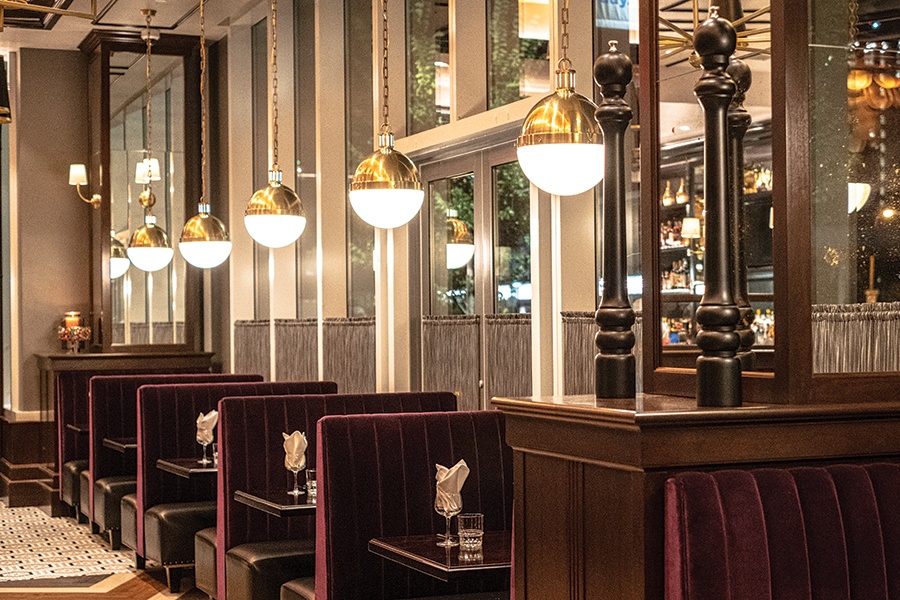 The menu, too, plays with convention in clever, nuanced ways. The kitchen has a keen instinct for when to play it straight, when to get cute, and when to go off-roading. Familiar standards are organized into traditional ristorante courses, from antipasti to contorni, but the more you eat here, the more you realize every dish has been gently reengineered to work just as well as a series of shareable smallish plates. The best advice is to select a few favorites from every section—there isn’t a weak link—and let remarkably clued-in servers handle the choreography.

Sometimes a show’s most memorable numbers are the quietest tunes. Hand-pulled mozzarella ($7), warmed to the precise temperature where everything starts to blub out all come-hither and stretchy, showed up on elegant china in a pool of olive oil. An adeptly balanced Caesar salad ($14) of red romaine and chrysanthemum wore a peppercorn-crusted avocado wedge, an unexpected moment of textural luxuriousness.

Faison’s clever spin on cacio e pepe ($24), by contrast, was an all-out showstopper: pillowy tortelloni stuffed with taleggio, cream cheese, and grated Parm swapped in for traditional spaghetti. An unexpected dollop of salsa verde adds a burst of welcome herbaceousness, and they’re served seven to the hot, buttered plate—as easy to split as an order of pot stickers. House-made lobster bucatini ($31) breathed new life into a Bay State cliché by pairing the chewy-tender morsels of shellfish meat with their precise textural echo (al dente noodles), then blanketing the whole shebang in a brown-butter-thickened seafood stock. The pasta section’s one dud was fusilli alla vodka ($23): I’d never fully grasped why this classic always defaults to penne—you need hollow pockets for the fiery-creamy sauce to take temporary refuge, then gush out at unpredictable intervals—until my third (or was it my fourth?) identical bite.

The steaks-and-chops section was dynamite. Beautifully sourced rib-eye ($59) was as good as anything at Grill 23, with its charred, seasoned crust and nearly rendered pockets of flavorful fat laced with sizzling garlic browned butter. Well-marbled lamb chops ($43), burnished to ebony as doubles, then split in half so one side showed rosy pink, were so dreamy I regretted going sharesies.

The wine list, however, was exceptional, rooted in Italy and California and full of thoughtful, quirk-ball bottlings chosen by rising vino star Charlie Gaeta. Pastry chef Dee Steffen Chinn, meanwhile, contemporizes the classics in ways that rival any dessert cart in town. Who knew chocolate cake ($16), made with olive oil, truffle-style filling, and luscious ganache, could resonate sans cutesy deconstruction? 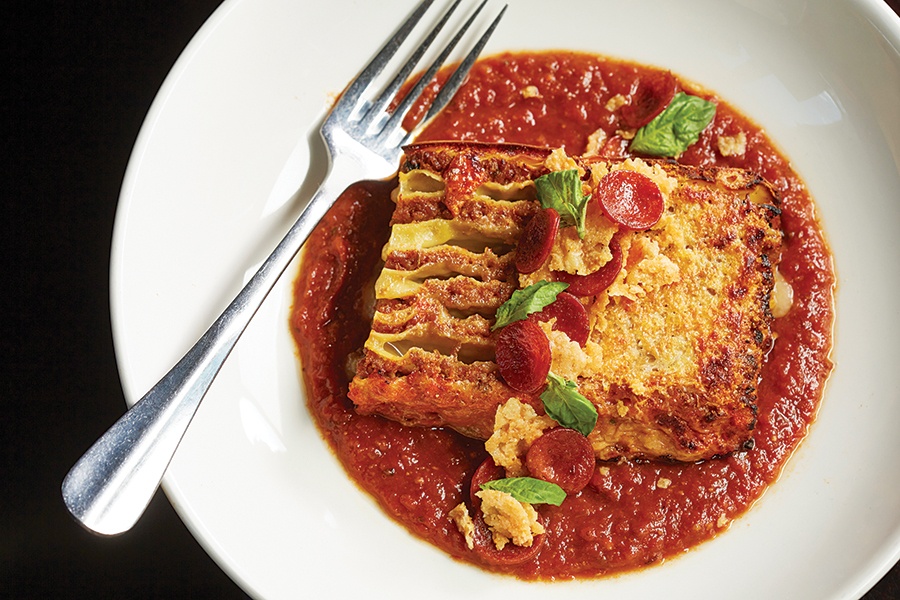 Cutesy, after all, isn’t in the lexicon here. The elegant middle finger to mascolino dining culture that appears throughout the décor extends to two dishes seemingly linked as strongly to disgraced chef Mario Batali as prune-stuffed gnocchi is to Barbara Lynch. Anyone who’s cooked out of Batali’s Babbo cookbook will recognize the monkfish piccata as one of his 1990s signatures: fish medallions bathed in a lemony white wine–caper sauce. Faison’s take ($28) one-ups Batali’s trademark flourish—a pinch of golden turmeric to enhance the hue—with a splat of rusty miso paste, which also adds a wallop of umami power. “Pizza lasagne” ($28), meanwhile, borrows a plating trick from Del Posto’s famed 100-layer lasagna by tilting the slab on its side like a slice of layer cake; Faison’s creative hybrid, though, is slathered through with a flame-orange paste of pulverized house-made pepperoni.

While I can’t vouch for any symbolism—sometimes a pepperoni is just a pepperoni—this I know for sure: Orfano nails it.