Dining Out: Cuban Restaurant Mariel Knows How to Have a Good Time

For its latest hot spot, a glittery restaurant group toys with modern Cuban cuisine—and a liberal application of excess. 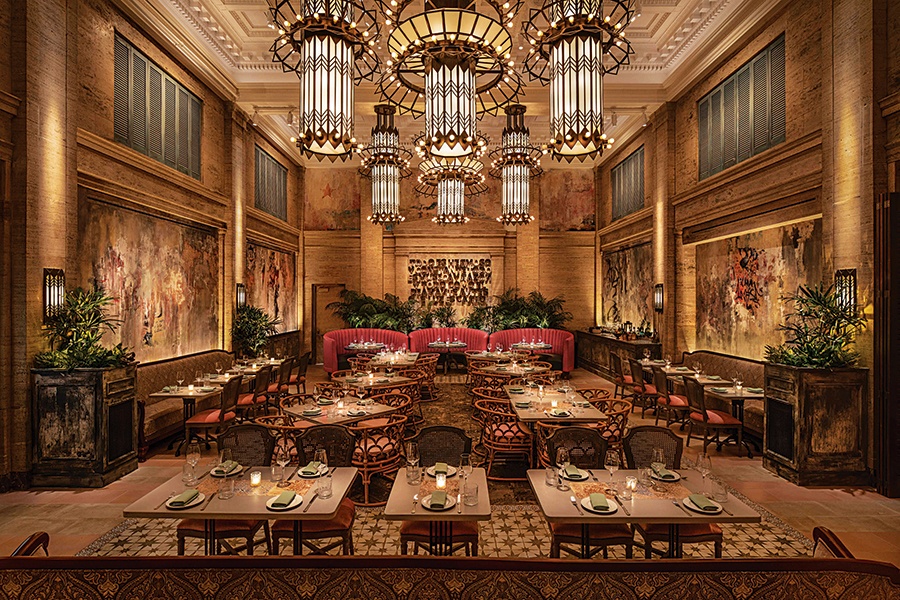 A stylish space, kicky cocktails (including the Mezcal-based “Trogon”), and vibrant Cuban cuisine, such as fufú gnocchi, is a formula for fun at Mariel. / Photo by Richard Cadin

It’s 7 p.m. on a Thursday night. The wind is whipping across deserted Post Office Square, a Financial District parcel bordered on all sides by old firms full of old men quietly pushing around giant stacks of old money. Inside Mariel, though, a cavernous marble room built to impress bank patrons swells with techno beats—not to mention an energetic, well-heeled crowd too young to ask why you’d name a restaurant after a Cuban refugee crisis.

To be fair, deep thinking is not the point here. Mariel is the latest from the local powerhouse Coje Management Group, whose distinct properties all aim to serve sophisticated yet flashy food in pulsing, posh atmospheres that straddle the restaurant/nightspot line. Some hit the mark better than others: Coje’s two Lolita restaurants are for people too busy TikTok-ing their evening to care if serving Mexican street food in a bordello-chic dining room makes any sense at all. Yvonne’s—housed inside the former home of Locke-Ober, a landmark dining room—proves that an ultra-lounge can convincingly impersonate a good restaurant. Finally, Ruka, which specializes in nikkei and chifa, pleasantly surprises with solid interpretations of rare-to-find (in Boston) fusion cuisines.

So what about Mariel? Like its siblings, it answers the question, “Is it a restaurant, a club, or a Cirque du Soleil set?” with a resounding “Yes!” When you home in on the first part of that trifecta, though, it’s a little less clear whether the concept—which also features a subterranean cocktail lounge, Mariel Underground—nails the food as well as it nails the scene.

The interior, at least, is a definite stunner: think Yvonne’s after a season or two in sultry Miami. Like that elder sibling, Mariel seamlessly integrates original architectural details with new flair-heavy elements: graffiti, worn paint, and a soft orange glow that washes down from stage lights above, like late-day sun playing through palm fronds. The tropical vibe extends to a cocktail list heavy on sweet-and-juicy mojitos and daiquiris—though the bar also excels at drier options such as the gin-and-lavender “Jennings” ($14) and rum-and-Chartreuse “Cubicon” ($15). 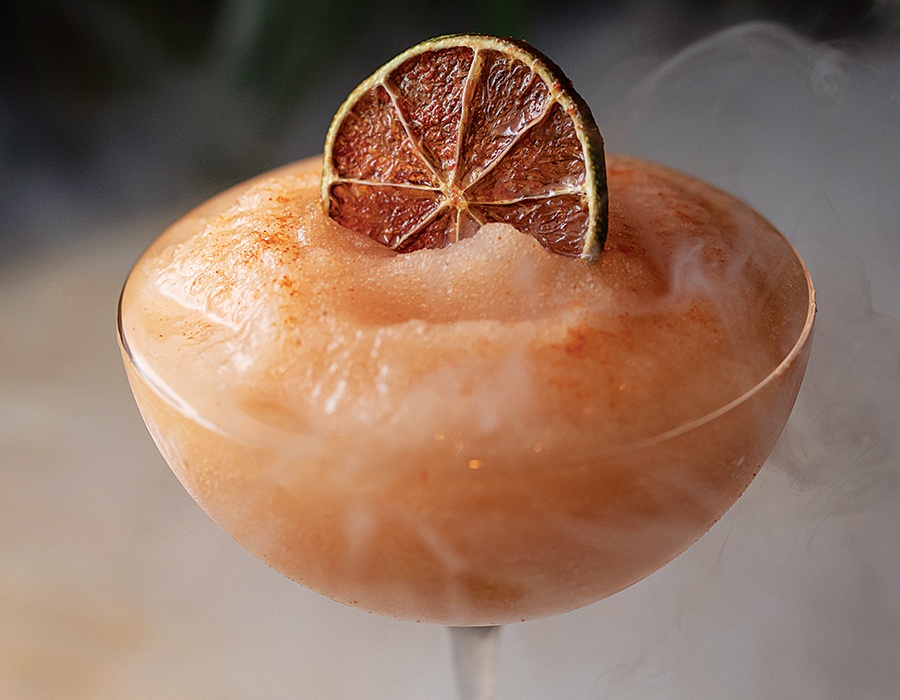 Mariel has kicky cocktails like the Mezcal-based “Trogon.” / Photo by Josh Jamison

Stick to sips and snacks, and you’ll do just fine. From the latter category, the yuca cheese puffs ($10), decadent fluffs of crispy cheese plated atop tangy sofrito, were perfect for soaking up a tower of flaming daiquiris ($56 for eight). Avocado smashed with spicy mojo sauce ($12) was pleasantly piquant, if fairly indistinguishable from any other bowl of slightly upscale guacamole in town. Pan queso frito ($10), meanwhile, delivered a thin slice of fried cheese that was nicely balanced by guava-onion jam bearing a kiss of smoke.

Things got more uneven, though, when we moved on to the rest of the menu, which is optimized for sharing. Overall, culinary director Tom Berry’s fashionable plates remind me of high school yearbook pictures of future movie stars: It’s clear that the right ingredients are all there, but the proportions haven’t quite worked themselves out yet. A small plate of tuna coco crudo ($18), for instance, arrived in a clever crystal cigar ashtray, but the delicate fish floundered under too much sour orange–coconut sauce and crudités-size strips of Cuban peppers. Havanese lamb belly ($17) nods to one of the Western Hemisphere’s oldest Chinatown neighborhoods, but the small squares of lamb hiding under a macro-forest of microgreens and little broccoli florets could have been anything but for a lashing of five-spice powder and hoisin sauce. Meanwhile, pan-seared fufú gnocchi ($16)—deceptively light plantain dumplings fried crispy with garlic brown butter, pecorino, and chimichurri-like ají picante—came out in a pool of oil deep enough for swimming, though I can’t deny they offered an invigorating face-slap of flavor. 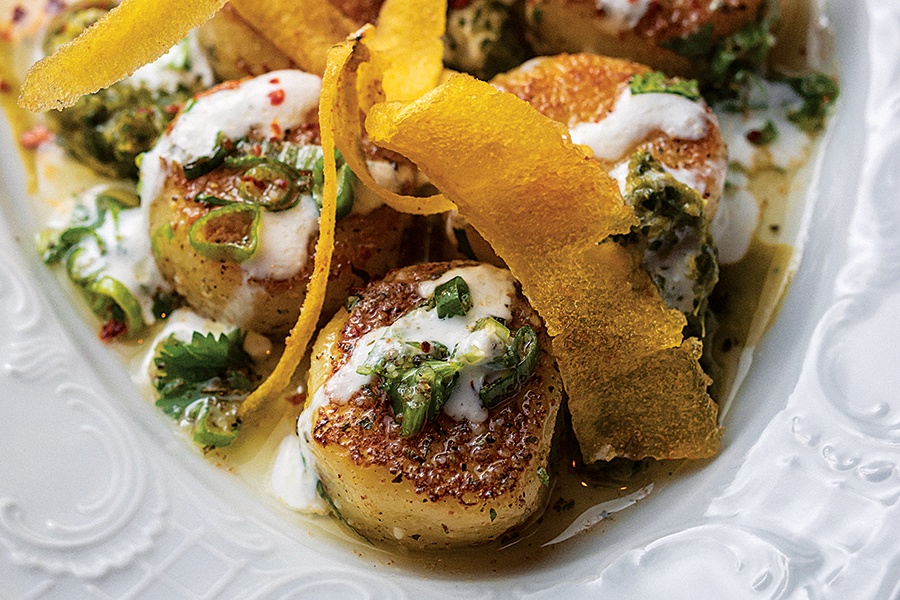 Proportions were similarly off in the large-format section of the menu, anchored by a manhole-scale Cubano ($80), which our waiter advised would feed eight. The 24-ounce steak fritas ($110), meanwhile, was enough for two committed carnivores, the rib-eye cap perfectly seared and tender but unnecessarily drenched in a mango vinaigrette. Wonky ratios similarly plagued the accompanying movie-popcorn-size bowl of fries, which were served with too-scant ají picante and garlic aioli. (Ketchup for days, though.)

A brighter spot was Berry’s tribute to Cuba’s distinctive pizza culture. Though little known in the United States outside Miami, Cuban pizzas are actually surprisingly familiar to the Boston palate: The puffy crust, slightly sweeter sauce, and liberal application of toppings are reminiscent of New England Greek pizza, save for the addition of Gouda alongside mozzarella on top (Mariel adds Gruyère). The uncomplicated formula works: We quickly dispatched with the Cubano ($17), which piled on all the trappings of the eponymous sandwich.

There is one place on the menu where Mariel knocks it square out of the park: the dessert section. In particular, don’t miss the “Coffee & Doughnuts” ($12), a churro-like trio served alongside a cup of mousse-y coffee cheesecake under a cap of torched meringue. Wash it down with a “Havana Speedball” ($14), a sweetened Cuban-style espresso chased with a flaming shot of rum, to polish off the party.

Of course, flaming shots aren’t often associated with Serious Restaurants. You might, however, find them in a swish and scene-y social club, and ultimately, that’s what Mariel really is. Might you eat finer elsewhere? Sure. But anybody who goes to Mariel and doesn’t have a good time probably needs to find better friends—not a better restaurant.