As the weather cools, a mad rush ignites. But desperate operators still won't be saved by al fresco dining alone. 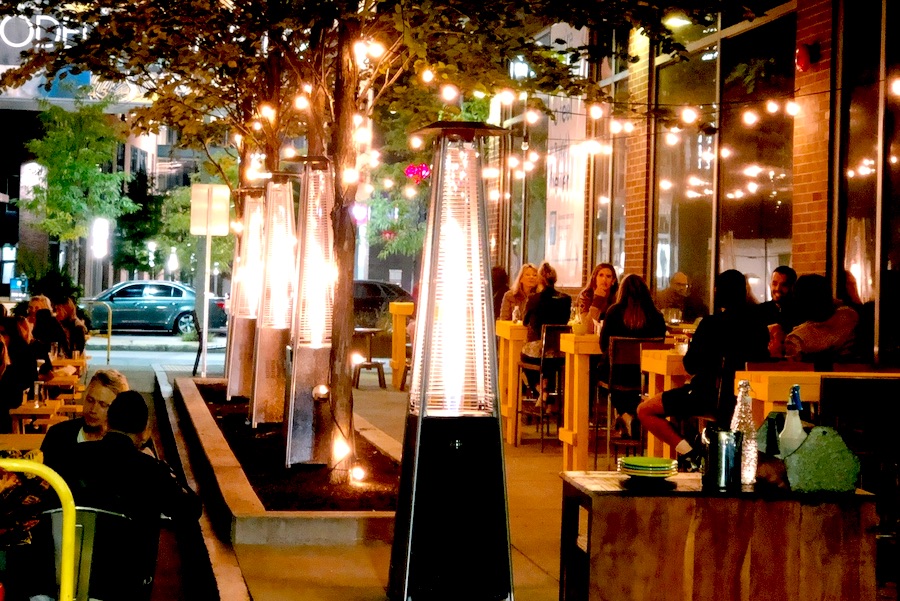 As autumn slowly inches toward winter, temperatures fall, and the pandemic-era economy continues to put restaurants out of commission (about 20 percent of Massachusetts eateries have already closed), business owners are doing their best to maximize outdoor dining while the weather still allows—and while federal relief funds remain stalled in Congress. The days are growing shorter, in more ways than one.

But there’s (yet another) hurdle in the way: a space heater shortage that’s stymying plans for extending patio season. Now that the rush is on to snatch them up, the most affordable, propane-powered towers used to keep guests warm are in short supply, according to anxious restaurant owners. Sales of at least some lower-cost units are backed up until late November. And even if you do seem to score one—well, you can’t count your heaters before they’re hatched from the shipping box.

Just ask Josh Lewin and Katrina Jazayeri, who co-own Peregrine in Beacon Hill and Juliet in Somerville’s Union Square. For six weeks, they’ve been scouring web-store behemoths, home improvement brick-and-mortar chains, and restaurant supply providers to find elusive patio heaters for their restaurants. Along the way, they managed to place just two seemingly successful orders—only to subsequently get emails stating that both had been cancelled.

Now the hunt goes on. “We’ve even tried calling retailers in warmer states, to see if they had some they could ship, or that we could drive to pick up,” Lewin says. Still no dice.

Over in Boston’s North End, meanwhile, chef Jen Royle faced a similar problem. She thought she had locked down four heaters for $1,800—an expense few restaurants can even spare at the moment—for her Italian restaurant Table. She thought wrong. “On the day they were supposed to arrive, I got a message on my phone that said, ‘your order has been canceled due to no stock,'” Royle says. “And then I couldn’t get them anymore.”

According to operators, the shortage has been worsened by COVID-era regulatory policies and timetables that change often, making it hard to plan ahead. For instance, Rebecca Kean, co-owner of uber-cool Brassica Kitchen + Cafe in Jamaica Plain, is among those who weren’t willing to spend much-needed money on heaters back when the state’s expanded outdoor-dining season was still set to expire in the fall; once Boston announced that seating on public property could remain until December, and that seating on private property could remain for the duration of the public health emergency, there was a “mad rush” among businesses to suddenly snag those heaters, she says.

All in all, it took Kean about four weeks and $2,000 to source three heaters, order the city-mandated storage lockers for the propane tanks (which must be removed nightly and stored outdoors on private property), and complete the application and inspection processes. Brassica finally got its heaters fired up last week, and the whole process “was worth it to give our guests a comfortable experience,” says Kean. Still, while she sees a “short-term benefit to revenue,” she knows that, in the long run, the upside to earning a few more nightly guests is hardly going to stop the financial hemorrhaging that restaurants like hers are enduring.

In fact, that’s the cruel twist to all this: Even restaurants that do eventually manage to secure space heaters find that, between the associated costs and the logistical headaches, they’re not all they’re cracked up to be—and probably won’t move the needle much, in terms of keeping our favorite spots solvent during colder months. For one thing, between socially distanced tables and the additional restrictions on table-to-heater proximity, each fire tower might barely be able to warm only a single party or two. And they’re expensive to keep running: The South End’s Yellow Door Taqueria, for instance, has been spending about $1,400 per week to refill propane tanks for its five heaters, according to co-owner Jarek Mountain. That number will only climb as the mercury drops. “We plan to keep the heaters going if guests are willing to continue to dine outside,” Mountain says. “But the situation is honestly dire. The costs are a complete loss.”

Similarly, while Raffi Festekjian, co-owner of the South End’s Eastern Mediterranean restaurant Anoush’ella, managed to scoop up two patio heaters for his place, he has no plans to add more; he says it’s just not worth the expense for a fast-casual eatery like his, where the average diner spends about twenty bucks and takeout now comprises about 85 percent of business. And back at her Table in the North End, where she says only a few restaurants on patio-packed Hanover Street have bothered to set up heaters, Jen Royle says it was a blessing in disguise that her units never arrived. After reconsidering the math and hassle of maintenance and storage, she’s no longer convinced they’re worth the cost. She’d rather put that budget and time toward Table Mercato, a neighboring market she’ll open any day now, as well as her upcoming third venture, a takeout-only restaurant slated to land in another neighborhood in the months ahead.

As for Josh Lewin of Juliet and Peregrine? “I hope you see us pumping out some propane heat this patio season; I know it will help us,” he says. “But it’s no longer our focus.”

“Heaters aren’t going to save us,” Lewin adds. But motivated diners still might, and here’s his tip: “If you care about these jobs and places in your community, call your congressperson.”