Where to Find the Best Buffalo Wings around Boston Right Now

When the need for spice strikes, check out these sauce-covered classics, double-fried deviations, and more.

By Nathan Tavares and Scott Kearnan· 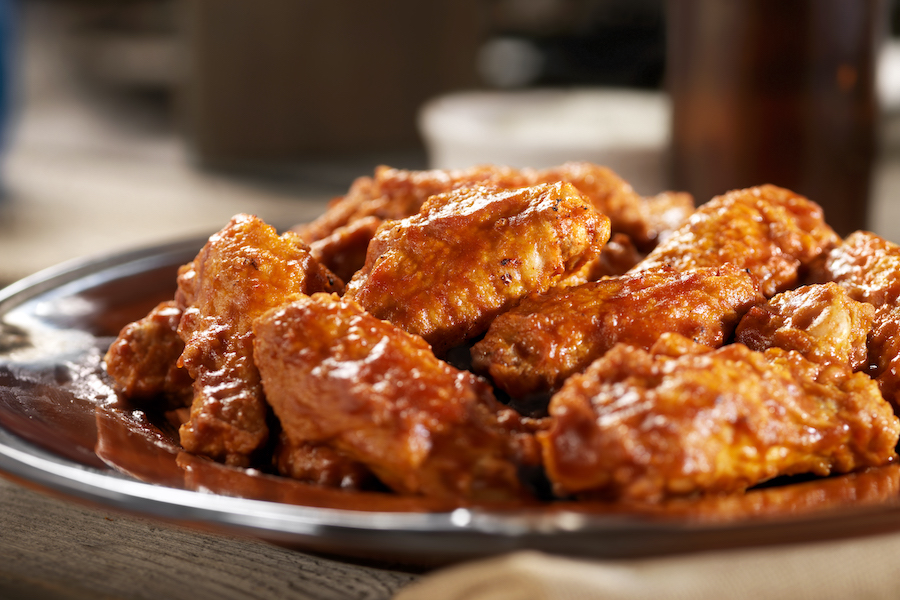 Legend has it that the phrase “a wing and a prayer” was originated by an over-stuffed diner trying to summon the courage to finish the last Buffalo wing in their takeout container. (Probably.) Of course, while binging on Buffalo wings happens to be a staple ritual of any Super Bowl celebration, we also venerate the morsel all year long. Case in point: this refereed roundup of the best Boston-area spots to blast your taste buds with buttery hot sauce and crisp chicken any time of year. 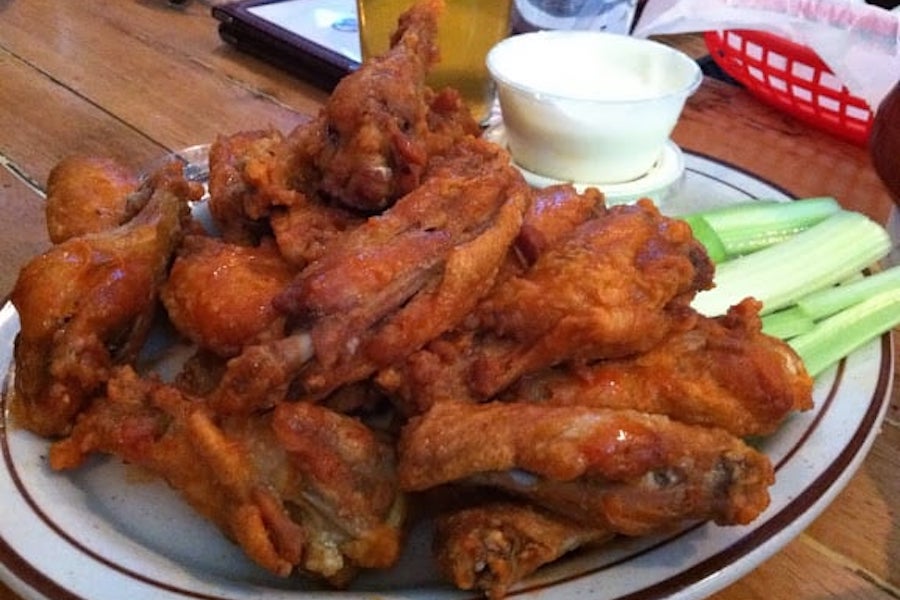 Buff’s Pub. / Photo by Julie B. via Yelp

We have no beef with Buffalo, New York, but this Newton spot blows even their wings out of the water (or, sky?). Frequently notching a spot on best-wing roundups in Boston and beyond, Buff’s brings the heat with five levels of Buffalo sauce. That means you can tiptoe into spicy town with a mild riff on the stuff, or—if you happen to have a cast-iron stomach—try the Newton noshery’s extra-scalding version. However hot you like your wings, you’ll also find relief with cooling house-made dips, such as a side of sweet potato sauce.

Expect a bit of a wait when you order up a batch of these Korean-style wings, which come hand-brushed with your choice of sauce—there’s classic Buffalo, plus soy garlic, spicy barbeque, and more. These wings are double-fried, rendering the fat and skin into an extra-crispy coating that shields the moist meat underneath. Between that and the satisfying crunch, you’ll want to slow down and savor each bite.

A hidden gem on the Roxbury/Dorchester border, Mario’s infuses New-York style pizzas with Portuguese-inspired flavors. Think pies topped with paprika-packed chouriço sausage and sharp São Jorge cheese imported from the Azores archipelago. That said, if wings are your thing (and aren’t they everybody’s?) check out the wingding appetizers: bone-in, breaded bites that you can have tossed in buffalo sauce. Skip the instinct to pick blue cheese or ranch as a dip, though, and opt for the spicy Portuguese piri piri sauce instead. Dipping spicy chicken into spicy sauce may seem like putting a hat on a hat, but the robust garlic and lemon-forward flavors of the piri piri gives the Buffalo a boost.

On offer here are the objects of your fried chicken fantasies: wings generously coated in flour batter and fried until golden brown. When ordered as a special dinner combo, though, you can choose between baked or fried wings, and also choose two sides. Either way, the key is to add a note on your order asking the chef to toss the wings in the house hot sauce. (If you’d rather, order a few sides of the sauce to toss the wings in a big bowl yourself, ensuring that the chicken keeps its extra-crispy coating on the way from the restaurant.) As for those sides? You can’t go wrong with the Roxbury spot’s garlic smashed potatoes or dirty rice; while you’re at it, add Maxine’s house-made bread pudding and sweet potato pie to end the meal on a high note. 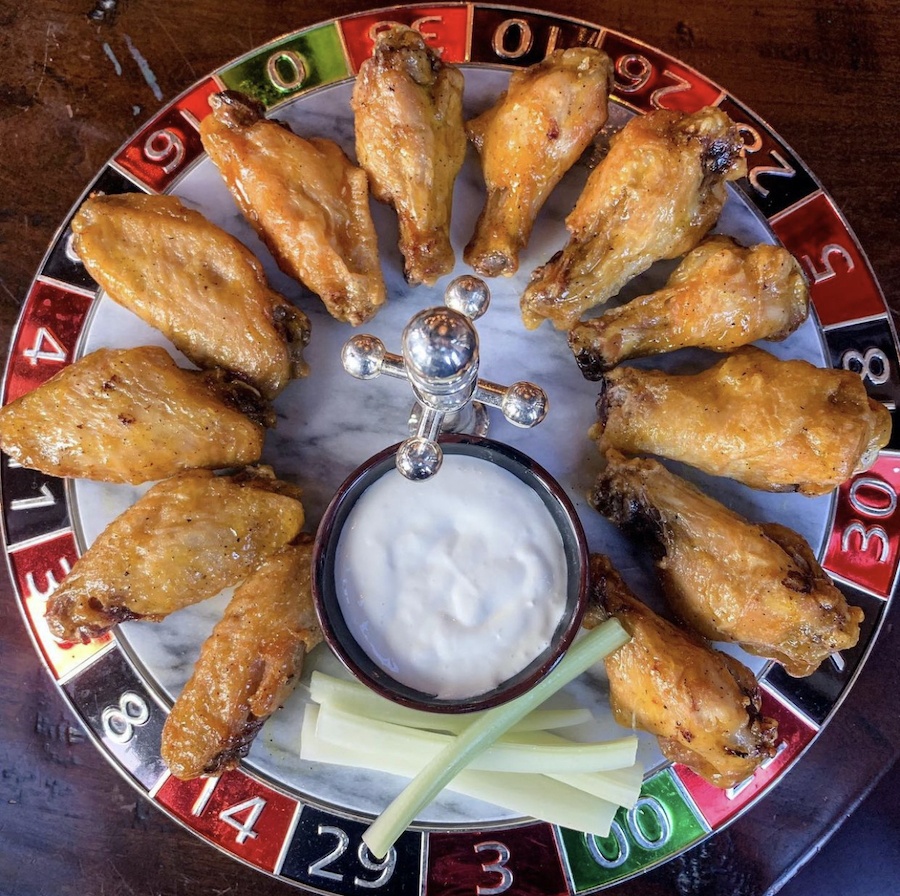 Feeling lucky, punk? Good. Maybe, then, you won’t get stung by the “Super Hot Death Wing” that hides on the platters at Scorpion Bar. The restaurant-nightspot, known for its 2-and-a-half-pound burritos and big-beat-dropping DJs, serves its hot wings on a roulette board—one of them, though, is secretly ready to scorch you (it reaches a whopping 350,000 on the spice-gauging Scoville Scale). Keep a margarita on deck to extinguish the flames, whether you spin the wheel at the Seaport location, Patriot Place outpost, or (where else?) the original Scorpion den inside Foxwoods casino.

We were pretty nervous for a while there: Silvertone, an absolutely classic, subterranean haunt in downtown Boston, closed early in the pandemic. Then it stay closed. (A few months later? Yep, still closed.) Was this really the end for the relaxed, retro-vibe hangout we’d known and loved since ’97? Would—gasp!—those sauce-drenched Buffalo wings be gone for good? It was looking scary for a while, but the spot finally reopened this past September. Yes, the wings are still on the menu, still among the city’s best, and still served with a thick, creamy blue cheese that is the superlative example of the dip. Case closed.

This Dorchester wing slinger boasts more than fifty flavors, from the purist-friendly Buffalo style, a mellow and buttery iteration, to dry rubs of garlic parmesan and a Hawaiian-inspired pineapple and barbecue sauce. Meal combos let you flirt with multiple selections, so order up, say, the ten-wing assortment and split it between spicy Buffalo and sweet cinnamon- and sugar-rubbed beauties. You could spend every weekend of the year trying a different flavor, which—well, great idea. 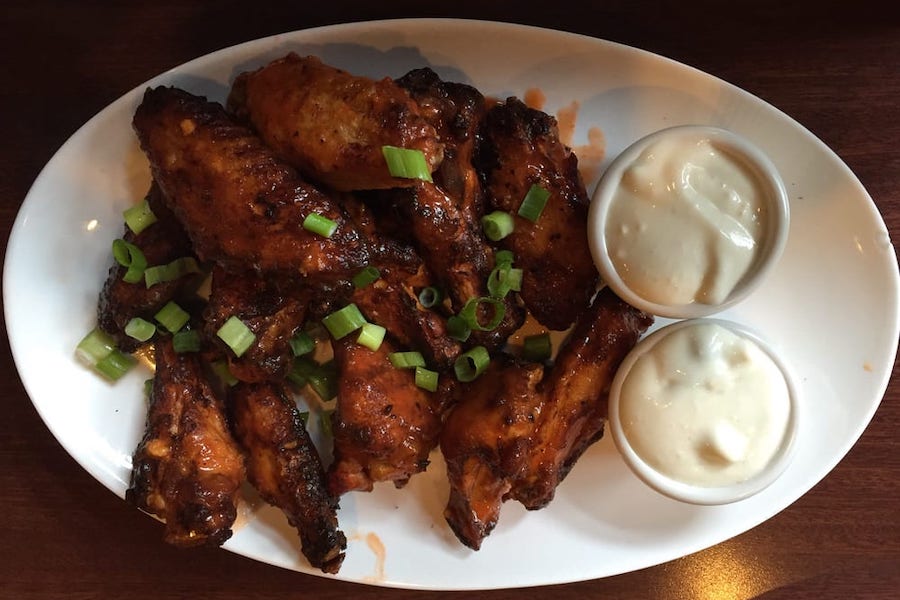 Buffalo wings and beer is always a blessed union, but at Woody’s Grill & Tap on the Fenway/Back Bay borderline, it’s elevated to an affair for the history books. After all, you’d be hard-pressed to find a spot where the wings are more pampered before they hit your palate: Woody’s first coats chicken wings with a dry rub of jerk spices, then bakes them in the oven and finishes them off in the fryer. Finally, they take a bath in house-made Buffalo sauce before a hot date with your plate (and a side of blue cheese or ranch dip). All that primping results in wings with moist meat and crackling skin coated in mouth-blazing sauce. Need to cool the flames of love and cayenne? Pick up a pack of craft brews to go, like the crisp Jack’s Abby Post Shift Pilsner.