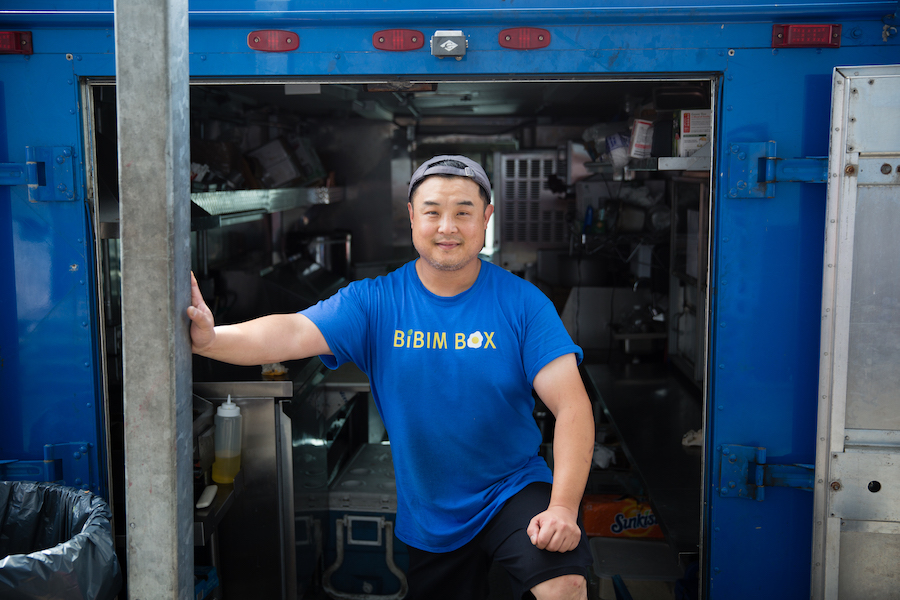 Not that you need another excuse to get out of the house try some new grub, but the warm-weather return of food truck is still a nice one to have. Check out this list of eight of our favorites on the streets around Boston (and feel free to peruse the city’s official schedule to find even more moveable feast).

You just can’t go wrong with bibimbap—Korean rice bowls of white rice mixed with meats, veggies, and a fried egg—or with Bibim Box, a local food truck with a signature offering of seasoned beef balanced by crispy greens, sautéed spinach and bean sprouts for earthy crunch. Top that off with the fermented kick of gochujang dressing for a flawless construction of flavor or build your own bowl stacked with sumptuous options like chicken or pork marinated in spicy-sweet bulgogi sauce. Keep track of the week’s truck appearances via Twitter. 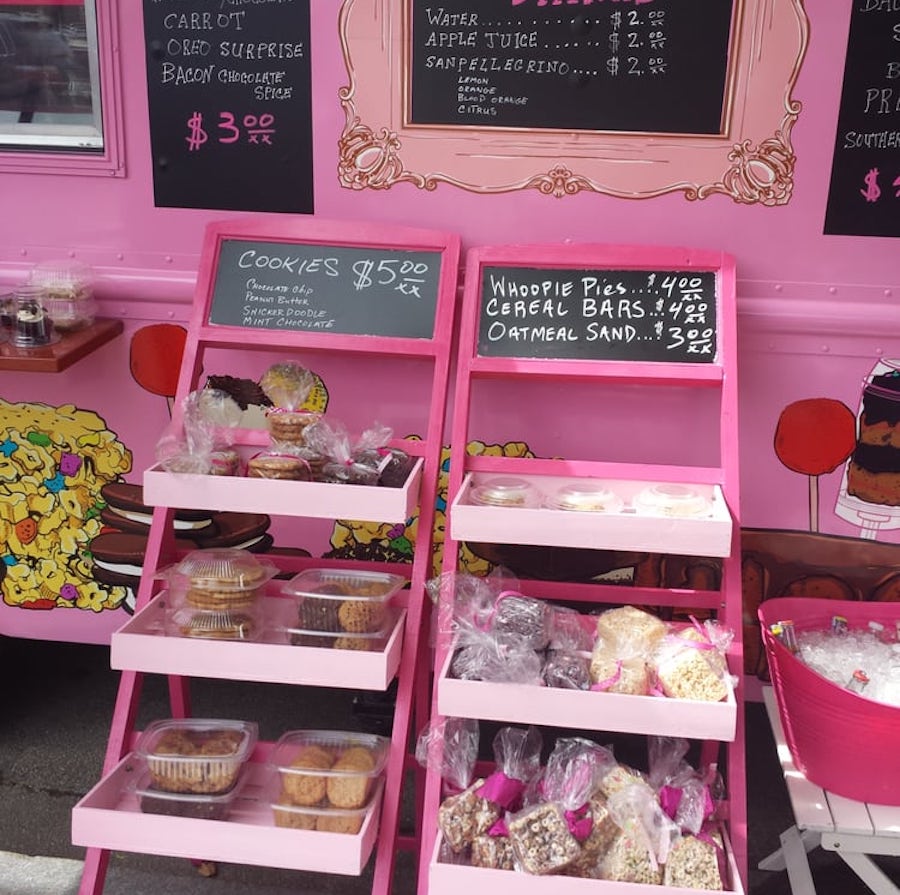 If a road trip to Exeter, New Hampshire isn’t in the cards to hit up the brick-and-mortar sweetery of Clyde’s Cupcakes, rest easy that their food truck dishes out sugar highs at City Hall Plaza on Thursday afternoons. The rush will power you through any midday slump, whether you go for devil’s food cake topped with vanilla marshmallow buttercream and chocolate ganache, or a chocolate cake bursting with Nutella and topped with hazelnuts, Nutella buttercream, and ganache. As for the carrot cupcake packed with coconut and raisins and crowned with cream cheese frosting? Nothing short of ambrosia from the dessert gods.

Relegated to a side-dish at restaurants around the city, elote—a.k.a. Mexican street corn—snags top billing at this food truck, which you can often find parked in East Boston’s Maverick Square. There are five variations, from the classic Elote Mexicano (steamed corn on the cob with chipotle aioli, chili powder, and crumbly cotija cheese) to an off-the-cob option, if you want to avoid getting all those kernels in your teeth. That said, a little flossing is a small price to pay for the Eloto Loco, corn smothered with salsa negra, cotija, and mayo, ketchup, and mustard. 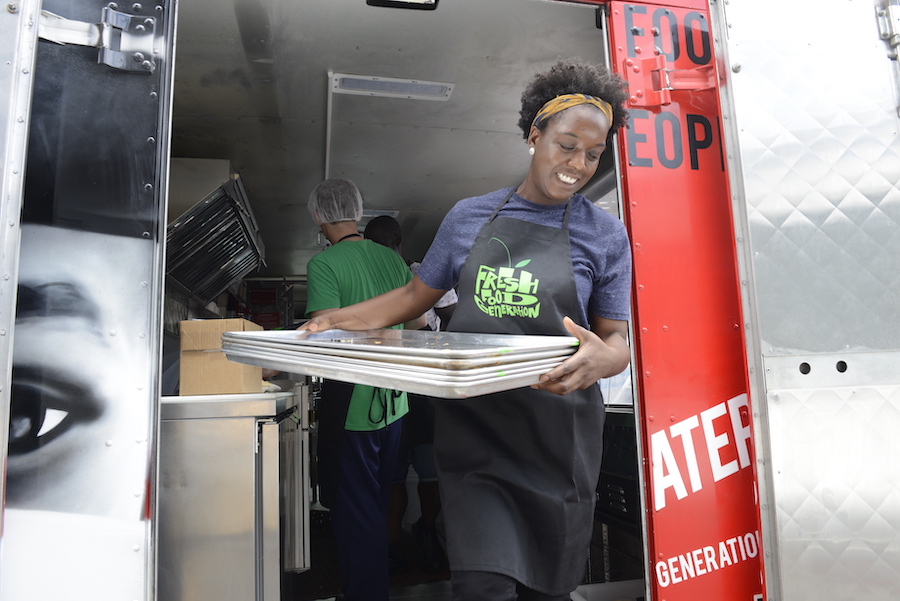 This food truck and catering company’s mission is just as fresh as its flavorful Caribbean-American cuisine: to bring nutrient-rich local foods to communities in every corner of Boston (and serve it all on compostable plates). Besides its admirable intentions, though, Fresh Food Generation also puts out stellar rice and salad plates. Case in point: scratch-made jerk chicken that’s an alchemy of spices and rich brown sugar, all rounded out by a hint of cinnamon. Other stars of the dairy-, gluten-, nut-, and soy-free menu include the vegan red bean stew that overflows with slow-simmered flavor and the side dish of sweet plantain with perfectly caramelized edges. You can often find the truck at the Longwood Medical area dishing out daily specials, and with a little luck, the delights du jour might feature their fantastic fried Brussels sprouts. 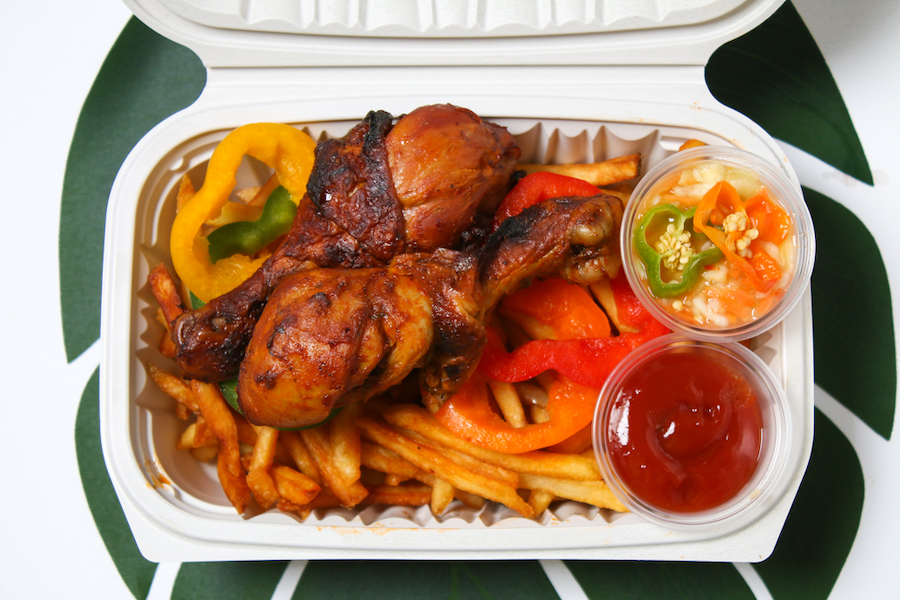 Keep an eye out for the pink flamingo painted on the side of this truck, a 2021-launched newcomer to Boston’s food truck scene. This is where you’ll find classic Haitian dishes based on the family recipes of founders (and cousins) Nathalie Lecorps and Karyn Glemaud. A must-try is the griot, a delight of citrus and scotch bonnet pepper-marinated pork that’s simmered and then deep-fried, and best served on a mound of red beans and rice. If you’re keeping pork off your fork, opt for the poul fri or the poul nan sòs—fried chicken or stewed chicken, respectively. The standout dishes are all accompanied by a zinging pickle slaw,  which is also available jarred, if you want to bring  some of its sunny heat to your own home kitchen. 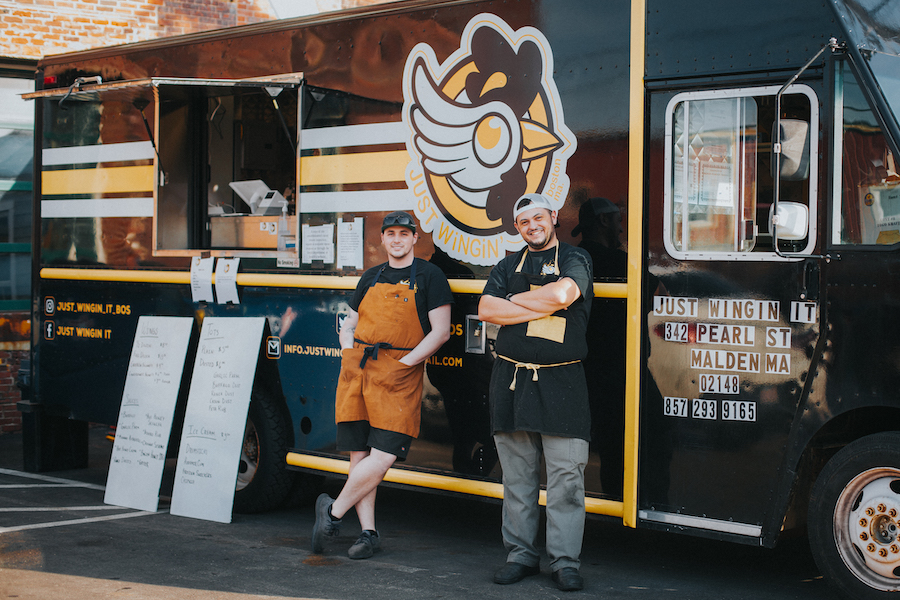 Whenever the craving for chicken wings hits, fly on over to this 2019-founded food truck, where soaring flavors meet never-frozen, extra-crispy wings. Specials posted online ahead of appearances—often at City Hall Plaza and Granite Coast Brewing in Peabody—include wings doused in scratch-made blackberry chili sauce and a hot honey “srirancha” spin. And, no, “srirancha” isn’t a typo; it’s the blessed union of sweet-spiked-Sriracha and ranch. The far-from-mundane everyday menu, meanwhile, features Greek-inspired versions, plus hot honey Cajun wings, and heat-meets-sweet mango habanero. Dunk the beauties in a host of dipping sauces, while you’re at it.

A hot dog buffet sounds like a sliver of heaven, doesn’t it? Well, you can now experience the nirvana of Brazilian-style hot-dogs by visiting a parking lot in Everett, where Love Dog heaps its franks with as many toppings as you can fit in your mouth. Sure, you can opt for plain dogs, but you’re really here to load things up from a full list of corn, peas, bacon breadcrumbs, potato sticks, mashed potatoes, and more. Hot tip: Order your overloaded dog hot-pressed for the fullest flavor experience.

Chef-founder Ruddy Bello created and named his taco and Tex-Mex food truck after a pair of fictional action stars, although you don’t need to know that backstory to appreciate the Pow! Bam! flavors. Take the house-made corn tortillas with classic slow-simmered chicken tinga in a three-chili sauce, or the cultural mashups like the falafel taco with habanero emulsion. Finally, don’t miss the El Duende, a blockbuster-level explosion of house-made vegan chorizo and sweet potato tots. Where to find it all? Vaz & Mac is parked outside Mass General Hospital most days.