From Boston's first sake bar to a new speakeasy-inspired spot, here's where to raise a toast. 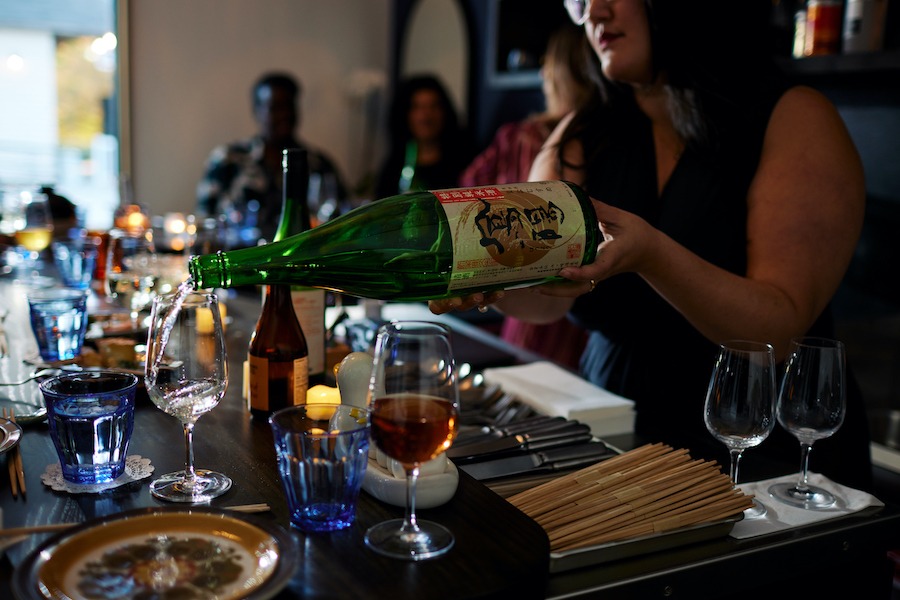 Sometimes you’re looking to dine out at one of the hottest restaurants in Boston. At other times, though, what you’re really hankering for is a killer cocktail, a buzzy bar vibe—and yeah, some really tasty snacks wouldn’t hurt, either. For that, we bring you a timely trip through the bars in the city that have us talking right now. Some of them rank among Boston’s most stalwart spots; others are unique newcomers, or simply mixing things up in interesting ways. We’ll always toast to that. 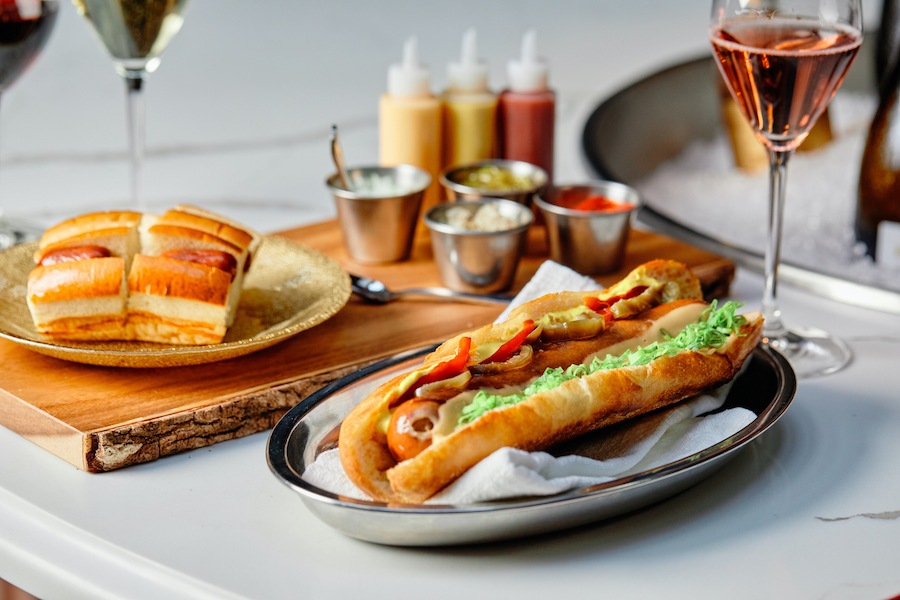 Bubble Bath / Daiquiris and Daisies (both at High Street Place)

At long last, the highly anticipated downtown food hall High Street Place finally opened this month—and celebratory bottles are already poppin’ at Bubble Bath, one of three (count ’em: three) HSP vendors from celeb chef Tiffani Faison. Bubble Bath is her wine and Champagne bar, where you can wash down gourmet hot dogs and popcorn with bottles of Imperial Brut procured from a rare Moët & Chandon Champagne vending machine. (To use it, you’ll swap your cash for gold coins.) 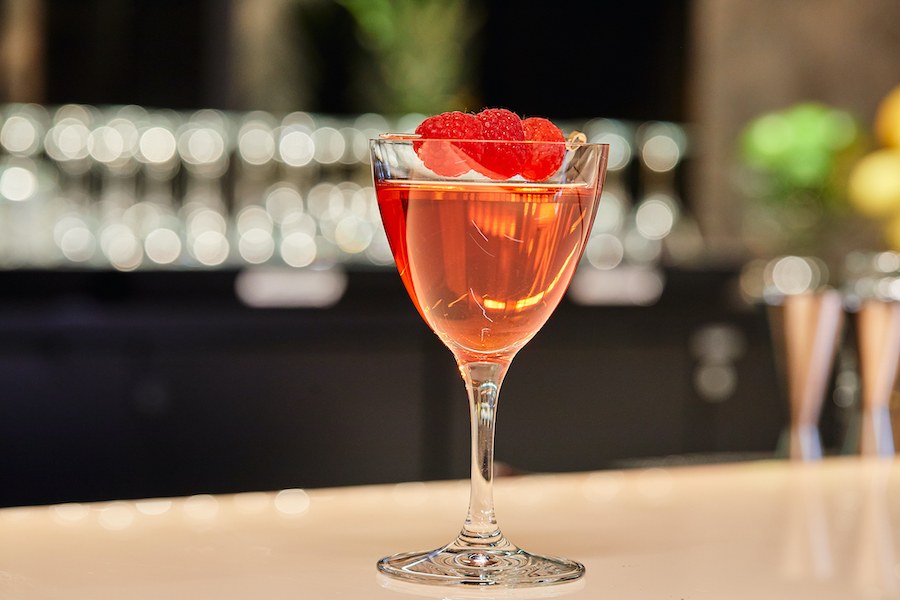 A drink at Daiquiris and Daisies. / Photo by Brian Samuels Photography 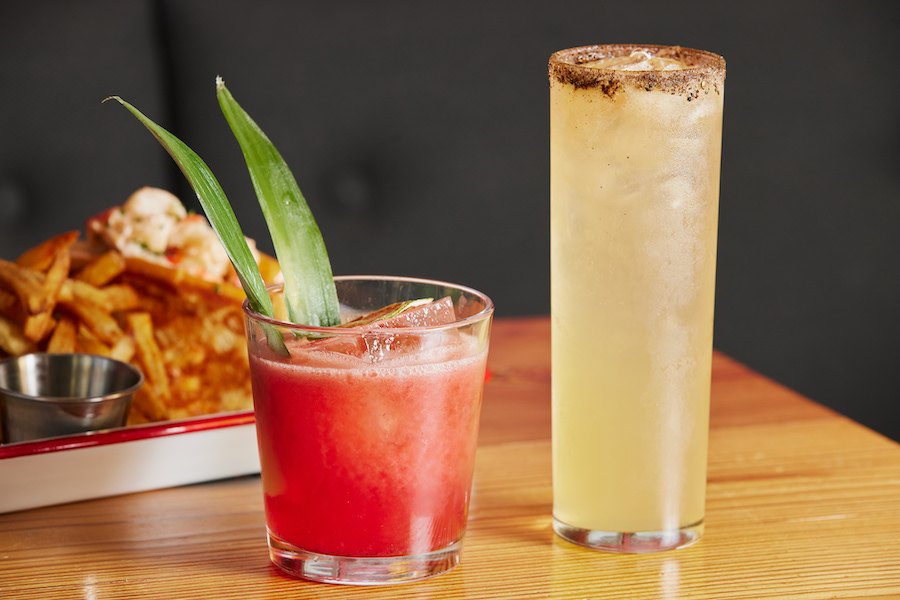 Boston’s own Mr. Wizard of mixology has a new home. Cusser’s, a Back Bay spot best known for its Best of Boston-winning roast beef sandwiches and lobster rolls, is now a top-shelf bar thanks to Todd Maul, the lauded Boston drink-master whose work at Ken Oringer’s late, great Clio (as well as Cafe ArtScience, an innovation lab-associated restaurant in Kendall Square), showed off his penchant for getting high-tech with cocktails: clarifying juices in centrifuges, things like that. With his new residency at Cusser’s, expected to last at least through the end of the year, Maul has a few tricks—and gadgets!—up his sleeve. They include one of only six Snap Chiller machines in existence, according to a release announcing Maul’s move, which can be used to “flash freeze liquids to sub-zero viscosity.” His LTD Lab, in operation Wednesdays through Saturdays, has nine numbered cocktails on its menu to start—from an orange rye-based concoction (#6) to a rum-loaded tincture with clarified peach and burnt cinnamon (#1). 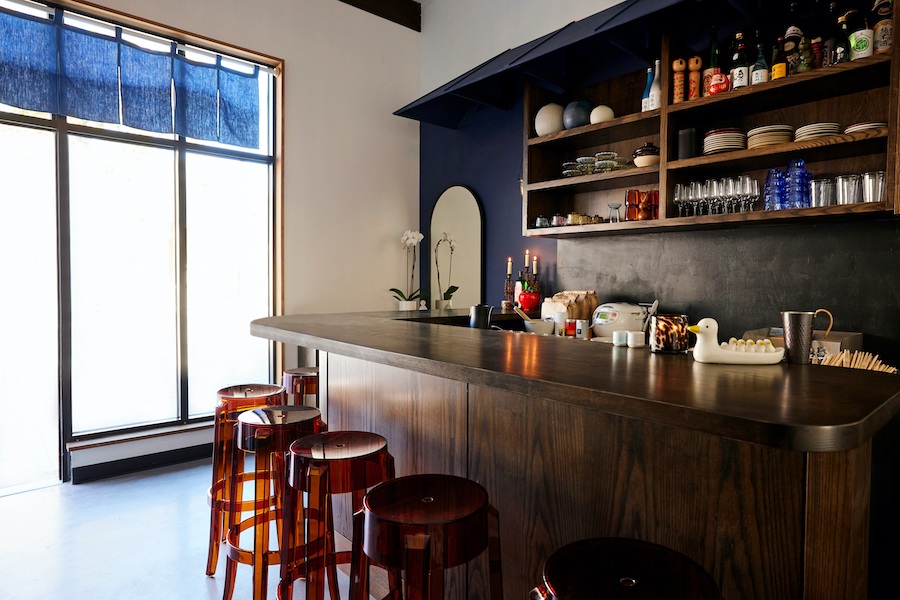 Sundays are reserved for ticketed sake tastings at the Koji Club. / Photo by Kristin Teig

The Hub has its first dedicated sake bar in the Koji Club, a stylish little boîte at the Brighton Speedway. Sake industry expert Alyssa Mikiko DiPasquale, previously an instrumental member of the team at Boston’s esteemed O Ya and its sibling restaurants, initially launched her solo venture as a series of Zoom-based tastings during the pandemic. Now, though, the Koji Club has a space IRL—a handful of stools for enjoying charcuterie and caviar while sipping on sakes like Untitled, from Japanese brewery Kojima Sohonten, an intense, cedar-barrel-aged selection that only recently became available stateside. 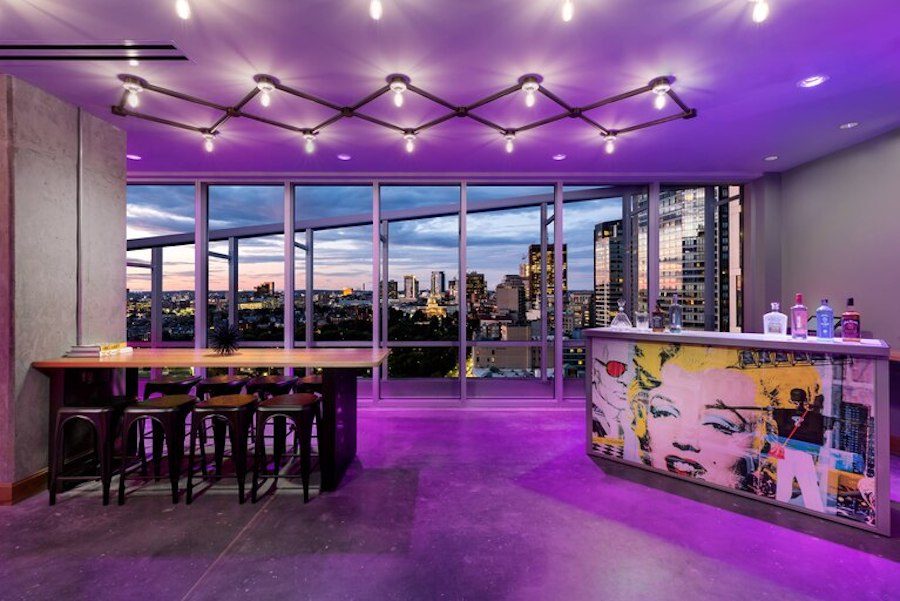 The Kowloon at Bar Moxy

Congratulations! You no longer need to brave Route 1 traffic to get a taste of the Kowloon, the famously sprawling, endearingly kitsch tribute to tiki bars that has endured in Saugus for decades now (although its days are numbered). Now you just need to head to Bar Moxy in downtown Boston, where the Kowloon has partnered on a  “2Faced Champagne and Tiki Bar” every Friday and Saturday night. In addition to signature mai tais, the pop-up at the Moxy hotel’s contemporary watering hole will be flooded with a boatload of other cocktails that capture the Kowloon’s slightly silly spirit, including the Dirty Shirley: Prosecco splashed with Sprite and grenadine, then garnished with maraschino cherries and frosted animal crackers. 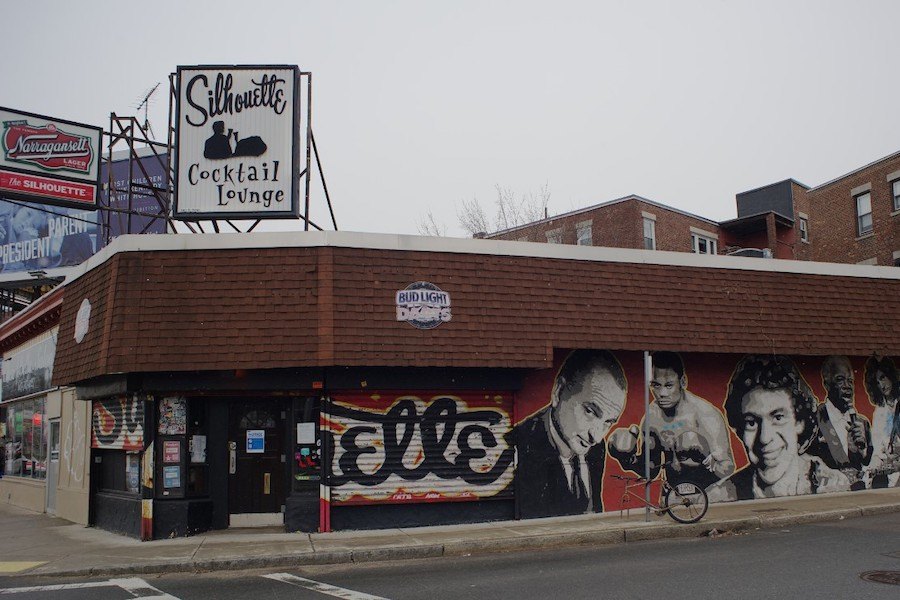 If you passed by the locked doors of the Silhouette Lounge in recent weeks, you might have panicked that Boston lost another legendary dive bar. Fret not!  The long-running, shadowy hang for Allston townies and hipsters (from before “hipsters” was a word) is reopening on Friday, March 18, under new ownership but with the same old staff, pool tables, dart room, and cans of ‘Gansett as before. There is one upgrade, though: $4 jelly sandwiches. Who says you can’t find a bargain in Boston anymore?

We recently named downtown gastropub jm Curley one of the best bars in Boston—and that was before we knew it would have an exciting new chef in John Malone, a talented toque who just moved over from Lucy’s American Tavern in Dorchester. It was also before we knew that great guest chefs from across the city would be taking part in a monthly dinner series at jm Curley, dubbed Revelry for Recovery, to rebuild the local energy and help participating restaurants bounce back from pandemic-era struggles. For the first installment, Malone will team up with chef Youji Iwakura of the now-shuttered nearby Japanese restaurant Kamakura for a five-course, beverage-paired feast on March 27. Hamachi pastrami or shiso oysters Rockefeller, anyone? 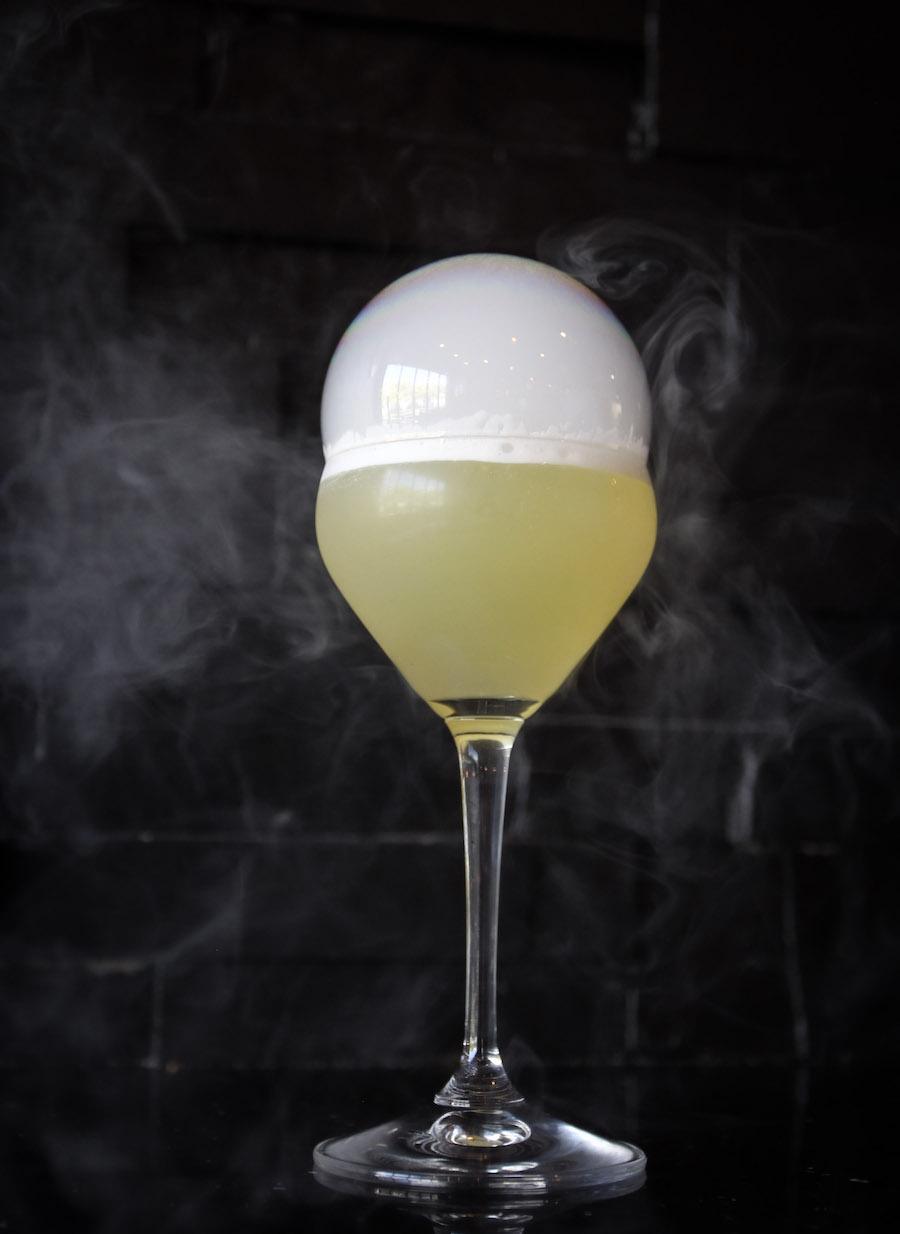 A smoke bubble-topped cocktail at Next Door. / Photo provided

You’ll have to find the entrance yourself. That said, Next Door is now open in the space neighboring Pazza on Porter, a young and modern Italian-American restaurant in Eastie. Once you get a glimpse at the speakeasy-inspired interior, though, you’ll find a dramatic-looking space swathed in ornate curtains and velvety blue banquettes; the cocktail presentations are similarly dramatic, topped with smoke bubbles or served in tiny treasure chests. Raw bar selections and other elegantly plated seafood bites, from salmon crudo to octopus carpaccio, are available too.

A subterranean bar space in Brookline has been reborn as the Village Social Club, a cool cocktail joint with a small corner stage for live music, comedy, and more. It used to be known as the Ellis Room, a canoodle-friendly haunt operating underneath the barbecue-oriented Magnolia Smokehouse restaurant. Now that the upstairs has become the Garrison House, a New American dining room, the downstairs bar has become Village Social Club, serving drinks like the Dancing Days (gin with pamplemousse, lillet blanc, lemon, and mint), and snacks such as Wagyu meatballs and poutine.

Retro mugs in the shape of tiki gods, Chinese food takeout containers, and eye-grabbing imagery make for mighty fine cocktail vessels at Wusong Road. Yes, it happens to be one of the hottest new restaurants in Boston for chef Jason Doo’s roasted duck feasts and small-plate spins on American Chinese staples. But even if you’re not hungry, the decked-out upstairs bar, featuring a design inspired by Asian temples, is a super-fun place to kick back with drinks like the One Night in Bangkok, a Singapore Sling-inspired cocktail that uses the dark Italian vermouth Punt e Mez.