We raise a glass to the local wine bars, drag clubs, cocktail joints, and more that are making drinking exciting again right now. 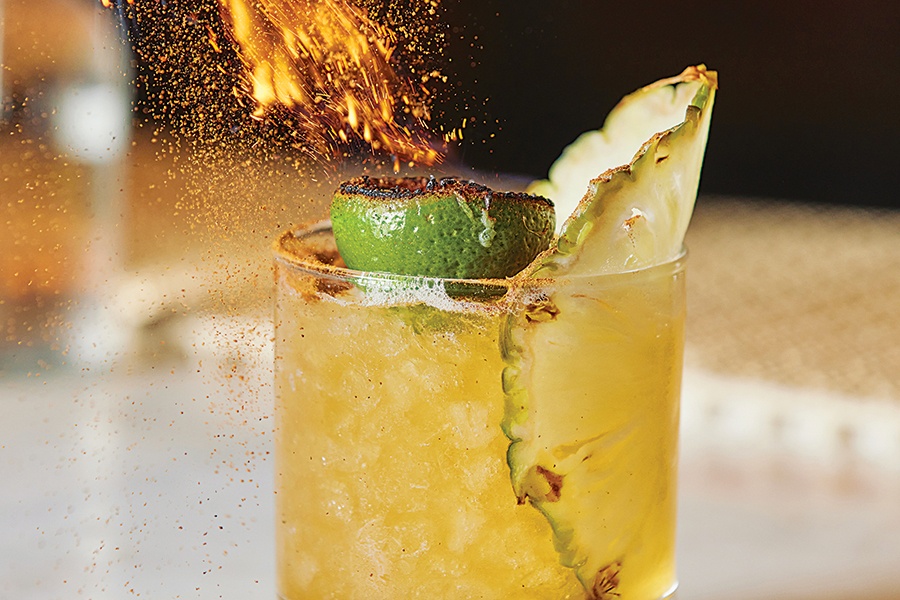 Toast-worthy talent Sam Treadway started his bartending career at Cheers, a TV-famous landmark, but became a legend at Backbar, his own hard-to-find Somerville hideaway behind a discreet alley door. This is a place to be known for, where perfectly calibrated cocktails—often riffing on playful themes, such as Disney or Star Wars characters—are proffered by friendly Sams and Dianes who get to know your naa-aa-ame by the second Scotch-, spiced honey–, and Miller High Life–spiked Winnie the Pooh.

Between his multiple drinking destinations in Brookline and Woburn, GQ cover man Ran Duan has earned every ounce of national credit for his mixology. Let’s take a moment though, please, to sing the praises of Will Isaza, his right-hand man at Blossom Bar. There, the menu of Chinese-American eats, a delicious hallmark of the Duan family’s Sichuan restaurants, finds a best friend in fantastic Latin American–leaning cocktails including the Bocadillo Sour, a mojito-like libation with guava paste and mascarpone inspired by Colombia native Isaza’s favorite childhood snack. 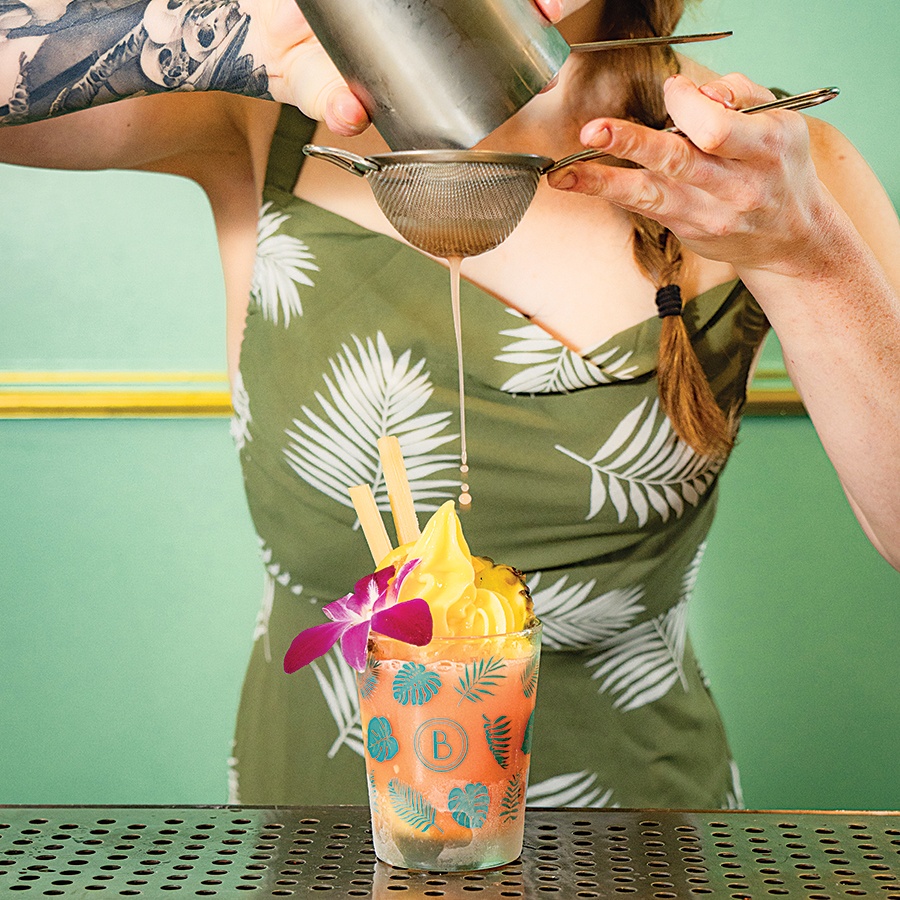 This now-decade-old Cambridge institution builds its rep on equal parts art and craft. You see the former in the “Graffiti Alley” exterior that owner Gary Strack offered as a canvas to street artists, and hear it in the vinyl records DJs spin inside. You taste the latter, meanwhile, in the meticulous preparation of citified-boho cocktails—like the Electric Kool-Aid Acid Test, a trippy tipple of Mezcal, amontillado, agave, and strawberry syrup—poured at the horseshoe-shaped bar. Together, they’re a rock-solid foundation for Brick & Mortar to stand tall.

Ever since this subterranean spot dropped anchor in 2018, its long and winding bamboo-fronted bar, captained by cocktail expert Ryan Lotz, has been a first-class escape for tropical drinks like the Palm Thief: rum with sweet vermouth, Cognac, and coconut. But if that wasn’t reason enough to get away here, chef Colin Lynch recently accented his Pacific Rim–inspired snacks (okonomiyaki tater tots!) with similarly playful sashimi and sushi, such as the lobster roll tossed in brown butter and yuzu kosho mayo. Bon voyage! 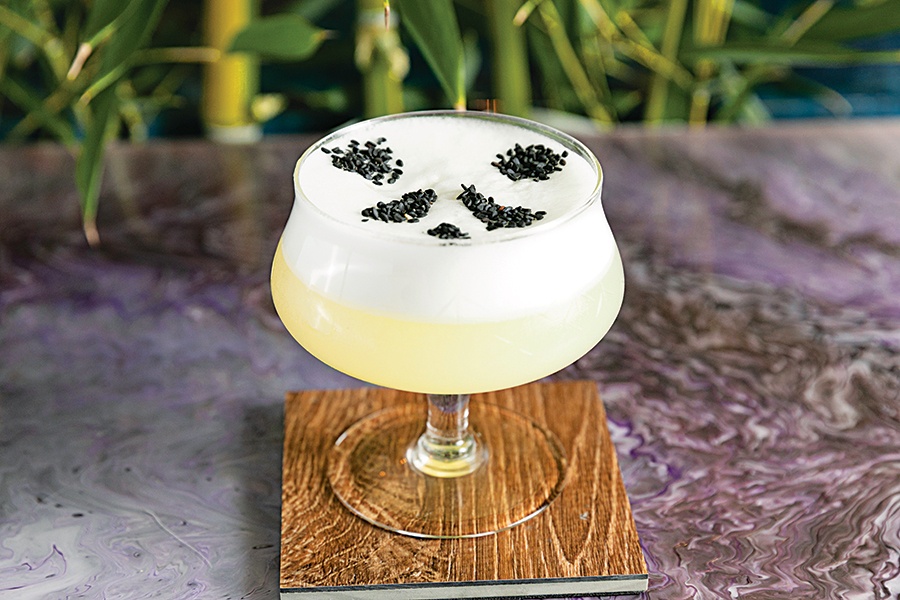 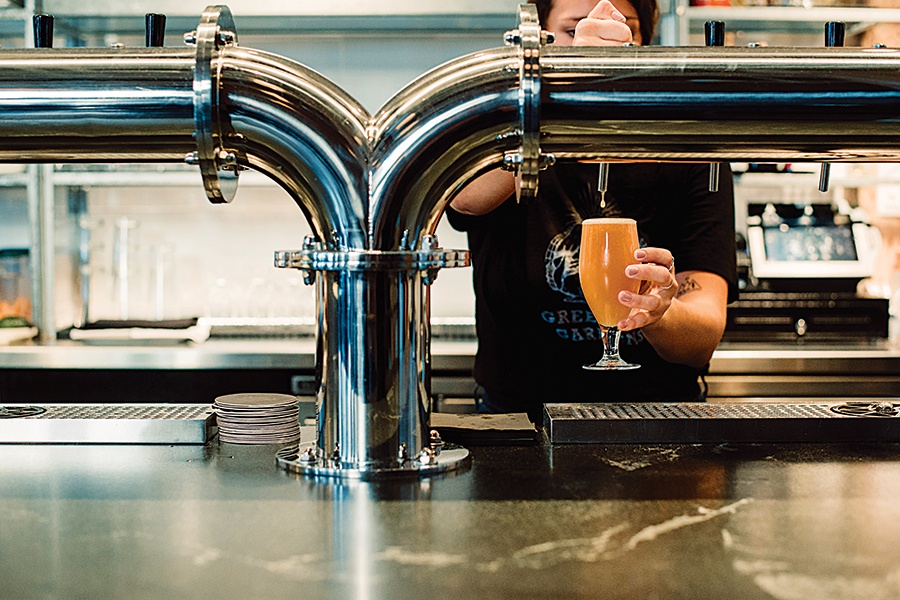 Seafood hot spot Row 34 has one of the coolest beer lists in town. / Photo by Emily Hagen

At a time when every neighborhood local was hanging on by a thread, J.P.’s beloved Irish pub managed to become an even bigger, better version of itself by adding an adorable brick-and-stone patio. It stays covered during cold winter months, and if the perfectly poured pints of Guinness don’t get you toasty, the heaters will. The cozy (and cash-only!), dark-wood-filled barroom, meanwhile, is always warmed by friendly folks slapping backs, singing to trad sessions, and generally having a great craic.

Its name proudly nods, understandably so, to the sweet lineup of fermented-honey bevvies, a relative rarity ’round these parts. That said, the (mainly) New England–made meads are actually but costars to the 100-plus beer taps decking this brew hall’s huge circular bar. At any given moment, those drafts might flow with super-local porters (Night Shift’s peanut-candy-inspired Phone Home); regional sour ales (Maine-based Lone Pine Brewing Company’s Blueberry Sparkler); and exciting imports such as Weihenstephan’s Vitus, a bold wheat bock you won’t want to miss.

There’s not a beer nerd worth their weight in hops who hasn’t worshiped at the altar of the Publick House, a shrine to hard-to-find suds including covetable Trappist ales, which are brewed by Belgian monks and universally regarded as among the world’s best. Craft-beer newbies shouldn’t be intimidated, though. The friendly savants on staff are happy to educate and evangelize—that is, when they’re not stewarding the superior pub grub, such as moules frites soaking up an IPA-based broth with jalapeño, sweet chili, and coconut.

Which brews pair best with seafood? All of them, at least at Row 34, where beer director Suzy Hays’s superlative list baits guests as effectively as the namesake variety of oysters grown in numbered racks in Duxbury Bay. Chase the briny bivalves with similarly striking selections such as Saison du Row, Row 34’s complex, cold-fermented new collaboration with the restaurant’s Fort Point neighbor Trillium Brewing Company; chef Jeremy Sewell even uses it to steam littlenecks in his just-published tome, The Row 34 Cookbook. 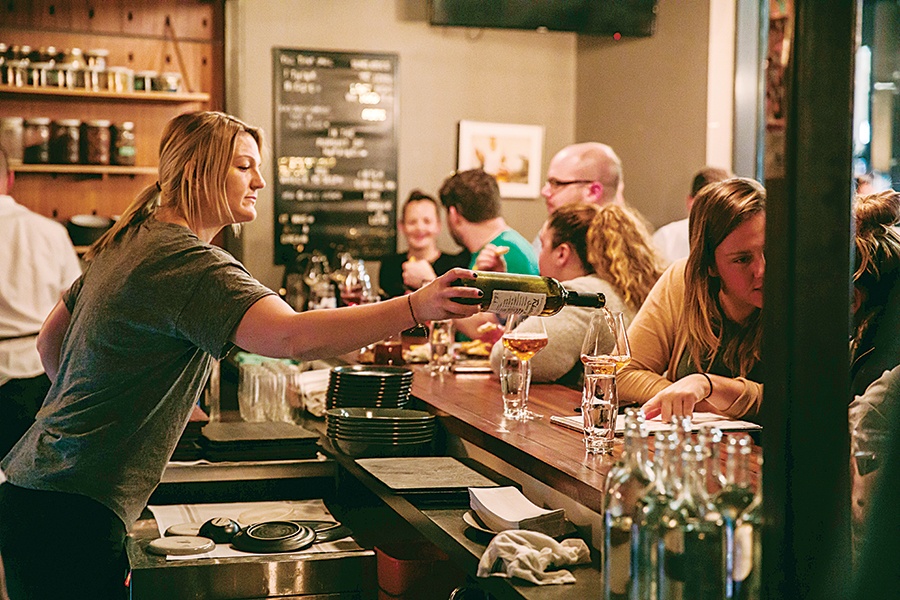 Even in the work-from-home era, star sommelier Haley Fortier’s itty-bitty wine bar remains destination-worthy for post–5 p.m. hangs. Her hip boîte offers everything by the half-bottle, putting within reach more pours of highly special, small-production wines from around the world—such as the smoky- and earthy-tasting Quebrada de Ihuanco, made with Peruvian pisco grapes. Imports of gourmet tinned seafood, such as spicy Portuguese mackerel in piri-piri, invite even more global flavors to the party. As for the soundtrack of ’90s rap? It brings the Flavor Flav. 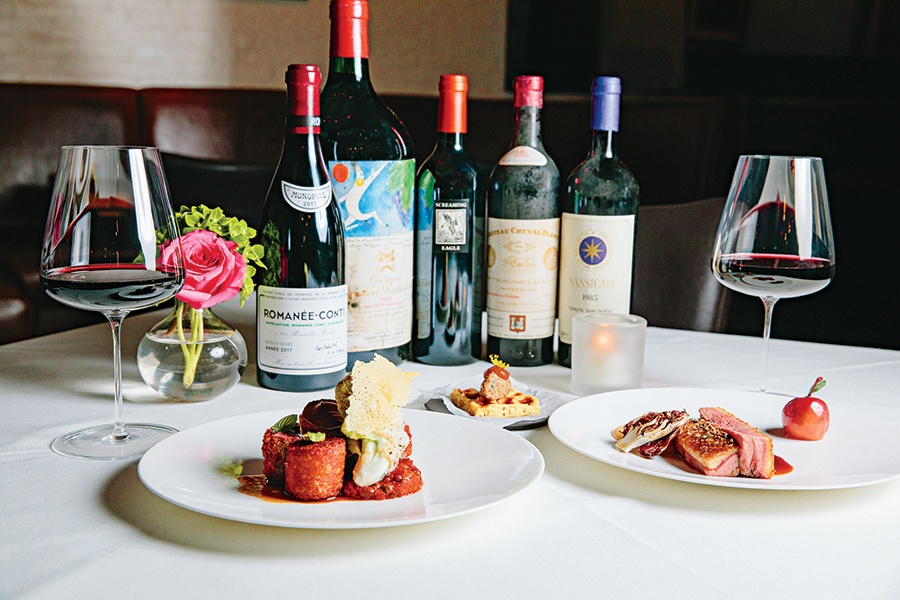 Fine-dining-friendly wines at Troquet on South. / Photo by Brian Samuels

Armed with more than 300 varieties, including more than 90 sherries, this niche bar within tapas restaurant Taberna de Haro has one of the country’s most comprehensive collections of Spanish and fortified wines. After you’ve sampled all the finos, amontillados, and more on their own, you can try them in kicky cocktails: Straight Law’s namesake libation, for instance, mixes Manzanilla with gin (the spot’s other specialty), while dessert drinks—like the egg-yolk-invoking Sherry Slip—complement sweet treats such as zurracapote, a Basque compote of red-wine-simmered stone fruits.

Sommelier-owner Chris Campbell’s modern French restaurant has one of the city’s best book-length wine lists, but he doesn’t have his nose in the air. It’s too busy sniffing out impressive bubbly to serve by the glass from a dining-room-roving Champagne cart, as well as other holy-grail-level grapes. Want to order one of the rarest wines in the world—a 1947 Château Cheval Blanc priced at $24,000—alongside fine foie gras and a food-truck-style hot dog? Park here. 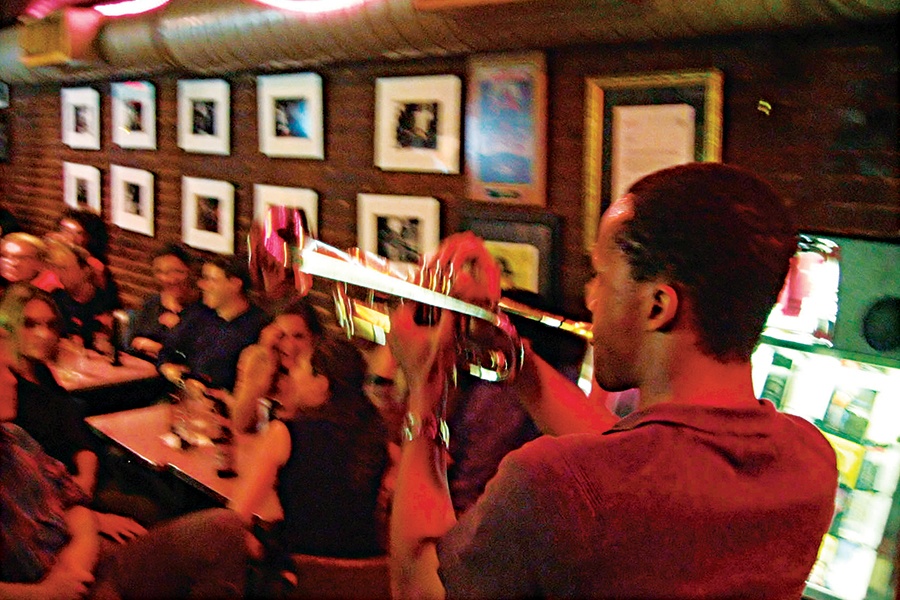 Tucked away speakeasy-style within the Central Square location of Roxy’s Gourmet Grilled Cheese, A4cade is the ultimate boozy indoor playground for ’80s babies. The warp-zone-like entrance, a false walk-in freezer door, opens to a roomful of wide-eyed grown-ups raised on pinball, Mario Kart, and Pac-Man enthusiastically toggling joysticks with one hand. The other, meanwhile, clutches a guacamole-stuffed Green Muenster sandwich, a Jell-O shot, or a kitschy cocktail like Princess Peach’s Downfall, a fruity and minty potion spiked with gold rum that’ll re-up your energy. All in all, it’s next-level.

When it comes to old-school gay dive bars, they don’t make ’em like this anymore. Since long before RuPaul’s Drag Race became an Emmy-winning mainstream hit, big-wigged, sequined queens have been stomping their stilettos all over the small stage at Jacque’s, where the air is still musky with the scent of queer culture’s sexy, subversive side. It’s a perfume of hairspray, pheromones, vodka sodas served in plastic cups, and crisp dollar bills tucked in the sweaty, ample cleavage of nightly performers. In a word: Yass.

There’s a ton of gloriously geeky fun to be had at this immersive board-game bar, where reservable private rooms also invite you and your pals to try out abbreviated, first-timer-friendly versions of Dungeons & Dragons–like role-playing games. In addition to shuffling cards and explaining the rules, your personal staffer-guide can summon you loaded nachos and libations, such as the spicy Crystal of Fire (cucumber liqueur and mango- and habanero-infused vodka), with the simple push of a button. Everybody wins.

For decades now, an inconspicuous Boston brownstone has been a legit American landmark for tossing back highballs and catching live music, from talented Berklee students honing their craft to local and visiting legends (Dizzy Gillespie jammed here!) on the sax, drums, keys, and upright bass. In fact, even during Wally’s temporary, pandemic-time closing, the historic bar has continued to livestream shows. We can’t wait to get back to sipping mint juleps with fellow foot tappers in full surround sound. 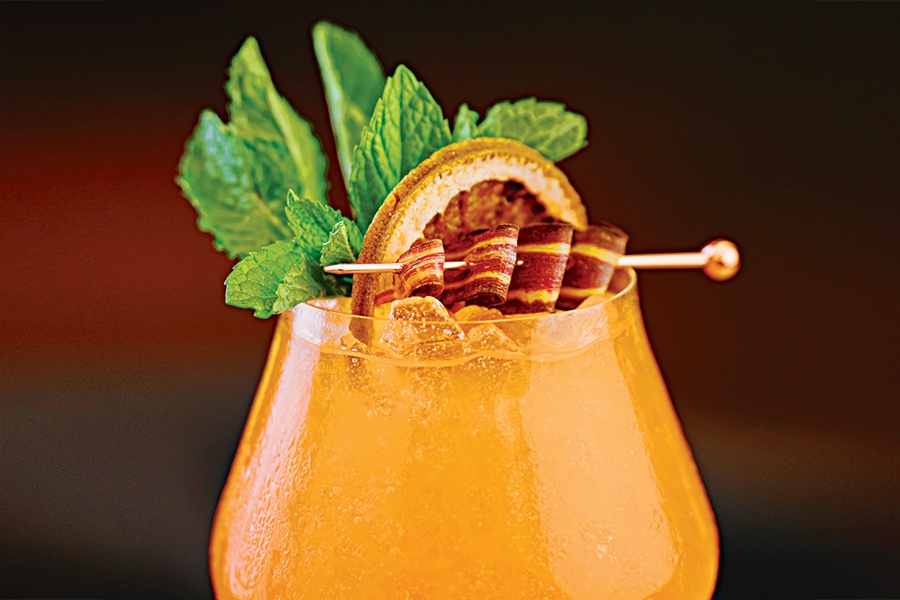 Recently deposited inside a former Federal Reserve Bank, the Langham hotel’s new bar clearly invests a lot of thought in designing alluring drinks such as the Jessica Rabbit, all vamped up with house-made orange-vanilla liqueur and a carrot-juice cordial. The terrace-equipped, art deco–accented space in the Financial District, meanwhile, is a convenient spot to brainstorm money-making schemes over the cheeky Bank Heist: a vodka-based communal cocktail poured from a gun-shaped bottle that arrives in an old-fashioned bank bag overflowing with dry-ice smoke and candy jewelry (to split with the gang).

When sake expert Alyssa Mikiko DiPasquale left Boston’s deeply venerated O Ya restaurant to launch the city’s first bar dedicated to Japanese rice wine, we followed—first online, where the Koji Club started in virtual form by home-delivering handpicked varieties in advance of Zoom-based tastings, and now to the Brighton Speedway. There, DiPasquale’s jewel-box-sized brick-and-mortar bar will show off even more rare imported gems, including the so-called Untitled, from Yamagata brewery Kojima Sohonten, an intense, cedar-barrel-aged sake that only recently became available stateside.

At the Four Seasons One Dalton’s chic new lobby bar, each creative cocktail draws inspiration from Boston-related art or history—or both, as with the Sticky Situation, a tantalizingly bitter blend of rye, sweet vermouth, and molasses-and-cardamom syrup that nods to the hotel’s eye-catching mosaic depiction of the Great Molasses Flood of 1919. Modern-day movers and shakers, meanwhile, frequent the au courant little spot for work-night rendezvous and, on weekend afternoons, spiked-tea parties of which our Revolutionary forefathers would surely approve.

Every visit to this darling wine, cheese, and dessert bar is a bite-sized digital detox, as cellphones are not allowed at its apartment-like arrangement of just eight tables. Why? To keep the focus on all the ambrosial conversation starters offered by the glass—say, the prized Sicilian Carricante, a majestic bouquet of pineapple, clementine, and vanilla. Then there’s the vanilla-bean-steeped chocolate mousse from co-owner and cocoa queen Alexandra Whisnant, which you’ll be too eager to share IRL to share on social media, anyway.