The longtime musician is always ready to rock. 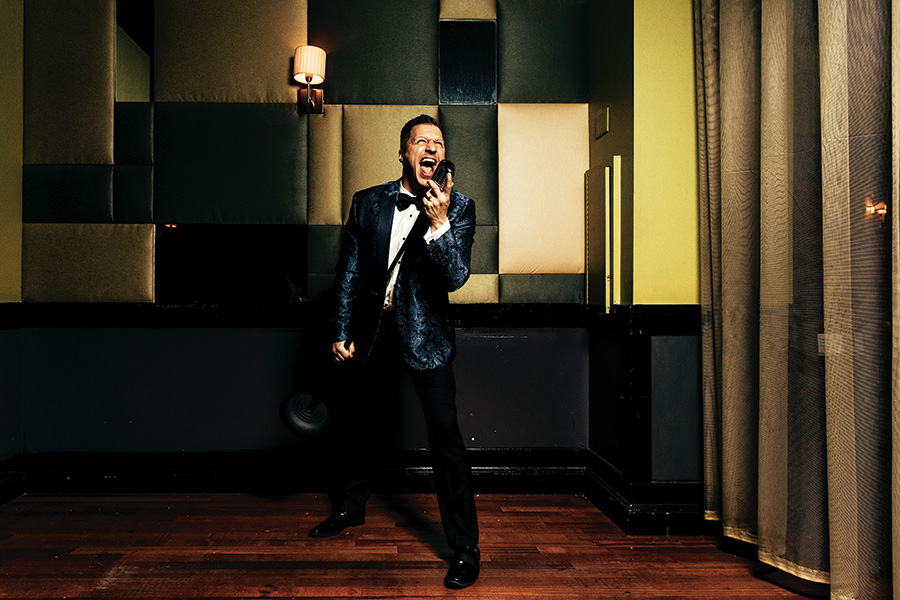 Jason Silverman has come a long way since his very first “gig”—a term he uses loosely, considering he played it with a “guitar” he’d made from elastic bands and a shoebox. “[My mom’s friend was in a band], and he used to play at the Ground Round in Braintree,” Silverman explains. “[One night the band] miked up my little shoebox guitar and let me come on stage to jam, and I was hooked from there!” These days, as the coordinator, emcee, and lead male vocalist for the in-demand “show band” Hot Mess, Silverman travels the world with his fellow musicians, turning receptions up to 11. “This is what we love to do,” Silverman says. “I’m always like, ‘Hey man, get ready—we’re bringing the party.’”

If a couple knows they want live music at their wedding, what should they consider when picking a venue?

If a venue is outside, they should be asking, “Have you had bands there before? Are there any restrictions we should know about? What time does music have to stop?” Rhode Island, for example, has a pretty strict outdoor noise ordinance. It’s the same thing for places like hotels. Sometimes couples can have the venue till 11 p.m., but the music has to stop at 10 p.m. So they have to plan around that.

What are budget-friendly ways to incorporate live music into a wedding?

[Look for a band] that isn’t as large. The more mouths there are to feed, the more expensive it gets. And then it depends on when you’re getting married. If you’re getting married in peak season, in September as opposed to January, you’re going to get a different price. [Same with] the day of the week—your venue might have a particular price on Saturday, but on Sunday and Friday, it’s cheaper. For bands [as well]; our Saturdays fill up first, and then we’re always looking to plug up our Fridays and Sundays.

How do you guarantee an appropriate sound level throughout the night?

If there’s one thing we’ve learned, it’s that acoustics can be your best friend or worst enemy. [Your musicians’] experience, professionalism, and mastery of their craft [are key] here. You need folks that can play softer without sacrificing dynamics. In-ear monitors for all band members [help]. They mean no amplifiers are needed on stage, which makes it much easier to control the room volume. Guests are catching up at dinner, and they need to be able to hear one another without shouting. Our drummer has been known to switch from sticks to brushes during dinner to keep levels down.

So, what does a couple get when they book Hot Mess?

We pride ourselves on our no-sub policy. If you’re booking Hot Mess, you’re getting the core, nine-piece band. We can add on more brass or percussion or guitar. We don’t scale down often; we scale up because some of the venues and events we play are really big, and we want to make sure that we’re filling the stage. [The effect is something] like having the E Street Band or Jimmy Buffett’s Coral Reefer Band up there. It’s pretty impressive.

I’ll do three or four calls with a couple before the wedding. I’ll ask, “What do you love? What do you not like? What’s the audience we’re playing for?” And then we go from there. I tell people our name is Hot Mess because that’s what our set list is: a big hot mess. We do have a foundation [of songs] that we work off, but we really can play anything. We’ve got [vocalists] Ashley and Carli, and John on guitar sings, Graham on keys sings, Lennie on trombone sings, and Tim on bass sings—the musicianship is unbelievable.

It’s an honor to be asked to play such a huge role in this milestone. I take that very seriously, as does the band. And a wedding is such a joyous occasion. Everybody is there to celebrate, so they’re amped up and giving you this energy, and you just feed off it. The second those lights drop, you get this burst of energy that I can’t describe—it’s the most intense natural high on the planet.

Jason Silverman shares four songs guaranteed to get guests on the dance floor.

“GOOD AS HELL” BY LIZZO

The title says it all: This is just a great feel-good song, and the build on the chorus is spectacular.

When we strum that opening guitar riff and sound the horns, the dance floor ignites! You can hear every generation sing the opening line in unison: “Do you remember, the 21st night of September?”

“I WANNA DANCE WITH SOMEBODY” BY WHITNEY HOUSTON

Watching all the guys sing every word is so awesome! I mean, who doesn’t love Whitney?

There’s nothing better than a 93-year-old grandmother whispering, “Play that ‘Despacito’ by Justin Beaver.” There’s a certain electric energy about this one, and it’s very cool to watch the entire floor sway like the ocean.