Seven Oh-So-Charming Historical Wedding Venues in and around Boston

These storied spots have only gotten better with age.

One of the many perks of tying the knot in the Bay State? A plethora of beautiful venues with decades (if not centuries) of history behind them. Read on for seven of the most alluring historical spots in and around the city.

Inventor John Hays Hammond Jr. built Hammond Castle in 1929 as a wedding present for his wife Irene, making it a fitting place to tie the knot. The castle, which features flying buttresses and a drawbridge, rests on a sprawling landscape overlooking Gloucester Harbor. The Hammonds not only lived at the castle, but John also used it as a laboratory and to house his collection of Roman, medieval, and Renaissance artifacts. Today, the castle operates as a museum and an event venue with several ceremony and reception spaces for up to 90 guests indoors, or 120 out on the grounds.

It’s no surprise that Copley Square’s crowning jewel, regarded as one of the most recognizable edifices in Boston, also happens to be one the city’s most gorgeous wedding venues. The McKim Building, modeled after the Bibliothèque Sainte-Geneviève in Paris, opened in 1895 as the country’s first large-scale urban library. Nearly a century later, it was designated a National Historic Landmark, where today events are operated by the Catered Affair. The building features a number of stunning spaces, including its courtyard, which is based on Rome’s 16th century Palazzo della Cancelleria, and Bates Hall—the library’s famous reading room, which seats up to 330. 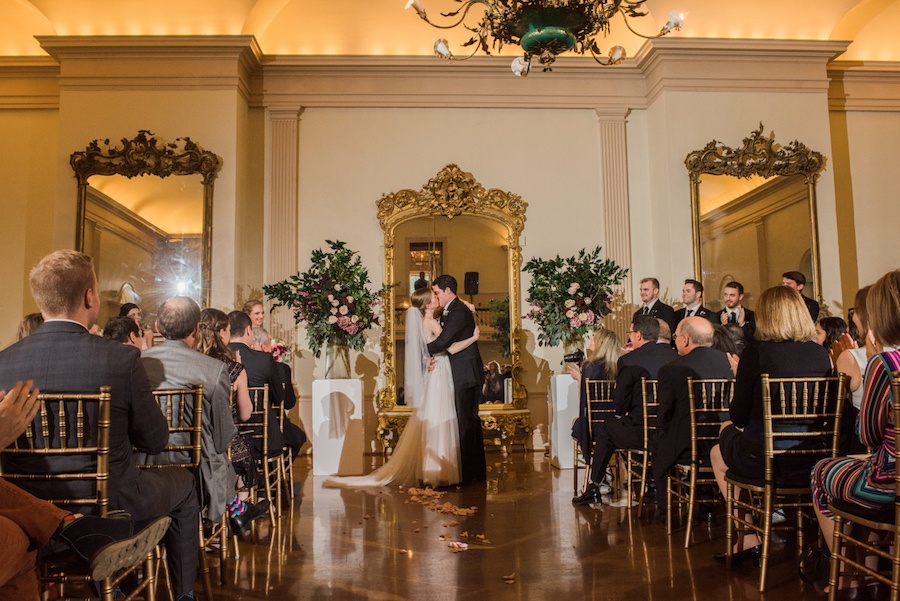 You may not have heard of Hamilton Hall, but this Salem site was at the center of American politics in the early 19th century, when Federalists and Jeffersonian Republicans clashed over the roles of the federal government and the constitution. Using funding from local merchant families, famed architect Samuel McIntire designed the building in 1805 as a meeting and function space named after Federalist party leader Alexander Hamilton. McIntire outfitted the Hall’s Grand Ballroom with a sprung floor to give it a softer feel for dancing, which comes in handy now that the building functions as a wedding venue. In addition to the ballroom, which seats up to 160 and features antique gilded mirrors and an Italian chandelier, Hamilton Hall also offers a dazzling garden for outdoor ceremonies.

For a showstopping venue with a fascinating past, you’ll want to check out the Cyclorama. The circular 23,000-square-foot-space was built in 1865 to showcase The Battle of Gettysburg, a 360-degree painting by the French artist Paul Philippoteaux. The building served a variety of functions over the next century, but in 1970, the Boston Center for the Arts purchased it and turned the Cyclorama into an event site. The jaw-dropping structure features brick walls and a copper dome (one of the largest in the country) and can accommodate up to 875 guests for a seated reception.

Chambers Russell, who named and played a key role in founding the town of Lincoln, built Codman estate in 1735. The house remained in his family for more than two centuries before becoming a museum and an event venue in the late 1900s. While the home does not accommodate weddings inside, its 16-acre grounds and renovated 19th-century, wood-paneled carriage house are the perfect setting for your nuptials. Have your first look in the English country garden, designed by Russell’s descendent Dorothy Codman in the 1930s, then say “I do” in the Italian garden, which features a vine-covered marble pergola and a reflecting pool. When it’s time to party, head inside the Carriage House and hit the dance floor with up to 70 guests; for parties of up to 150, pitch a tent on the grounds. 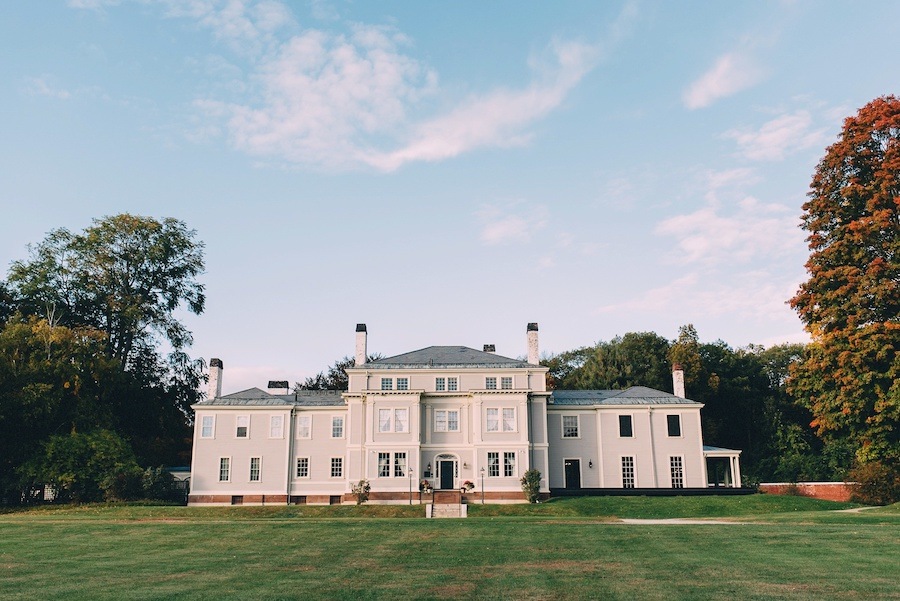 Built in 1793 as the summer estate for Boston merchant Theodore Lyman and his family, who lived there for more than 150 years, this Federal-style mansion sits on 37 acres with gardens and the oldest greenhouse in the country. Today, it’s a National Historic Landmark owned by the Historic New England nonprofit, and recently served as a filming location for the upcoming adaptation of Little Women. The venue can accommodate 225 guests for a tented outdoor affair, or up to 150 in one of five indoor spaces, which include a beautiful ballroom—where the Lymans once held elegant galas—with high ceilings, crystal chandeliers, and a marble fireplace.

If you’re looking for a Nantucket venue with a splash of history, there’s certainly no better place to swap vows than the oldest dwelling on Nantucket: a petite, shingled abode known as the Jethro Coffin House. Like Hammond Castle, the present-day National Historic Landmark was built in 1686 as a wedding gift for Jethro Coffin and Mary Gardner, both children of prominent early Nantucket settlers. The surrounding 1.2-acre property can accommodate both outdoor ceremonies and receptions for up to 200, as well as intimate dinners inside the house for smaller gatherings.