The Celtics star is still refusing to confirm or deny whether he knows the earth is round. 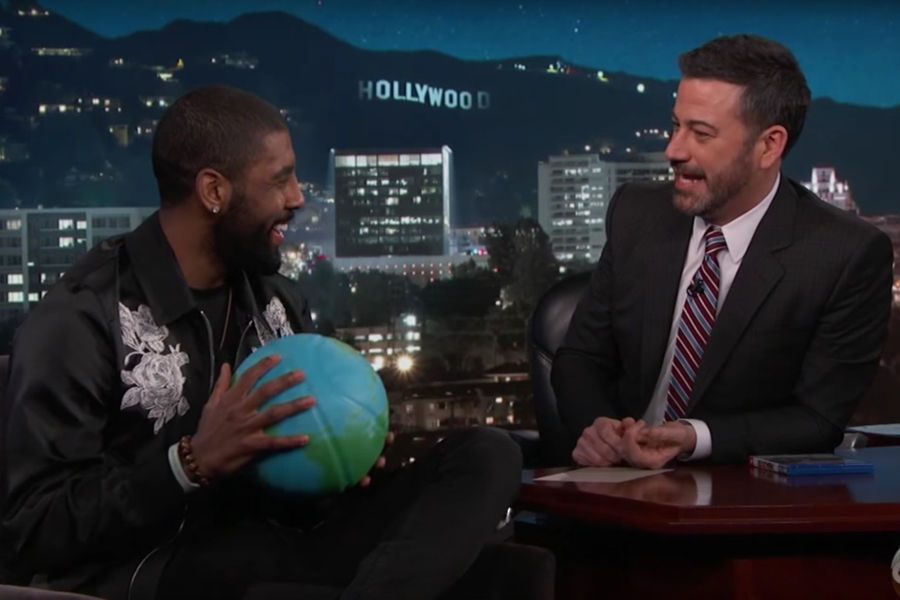 Look, there is no way Kyrie actually believes the Earth is flat. Could anyone this smart, charming, and talented really, truly believe it? Can’t we, for the sake of sanity, continue to just assume he’s trolling because the constant speculation and analysis of his beliefs is fun for him?

Well, we would love to, but he always seems to leave the door just a little bit too open to Flat Eartherism. Case in point: Last night’s appearance on Jimmy Kimmel Live!

In an interview, the superstar Celtics point guard talked about LeBron James, how much he loves being in Boston now, his Friends tattoo, and his career in film.

He was funny and eminently likeable, as always. And then came a question about Irving’s flirtations with the theory that we live on a giant flat disk, and we got another answer that left a lot to be desired. He sort of walked back his statements, again. But did he really?

“By the way, I know you’ve been asked about this a million times, but I’m particularly interested in it. You went on a podcast and said you believe the Earth was flat. Do you actually?” Kimmel asked. “Do you want to reel that in or do you still believe the Earth is flat?”

“Oh man,” he replied. “You know what? You’ve always tried to come back, take the statement back, but on that podcast I was just really like, ‘Man what’s going on within our world?’ and just a whole bunch of truth and conspiracy. I was just like, ‘Whoa, this is too much for me. And then I come out and say that and then, whoo, the reaction it got.”

Here’s the thing: Irving has successfully walked the line between actually promoting to the Flat Earth theory and carrying on as if he’s just messing with us. Many have tried and few have succeeded in gauging, definitively, how he really, truly feels. One day, he’ll tell Toucher and Rich that his comments are merely experiments in toying with mass media. And then soon after he’ll say something that suggests he’s less than certain. “I just want to know,” he said in October, insinuating that he does not already know.

“Yeah, people think maybe your brain collapsed or something like that,” Kimmel continued last night.

Kimmel then gave him a basketball with the globe painted on it, and invited him to “ponder the potential realities of the world and its possible roundness.”