Ahead of the hotly anticipated debut of Jagged Little Pill this month at the A.R.T., the world-famous artistic director gets tough on Boston’s business community—and that’s a good thing. 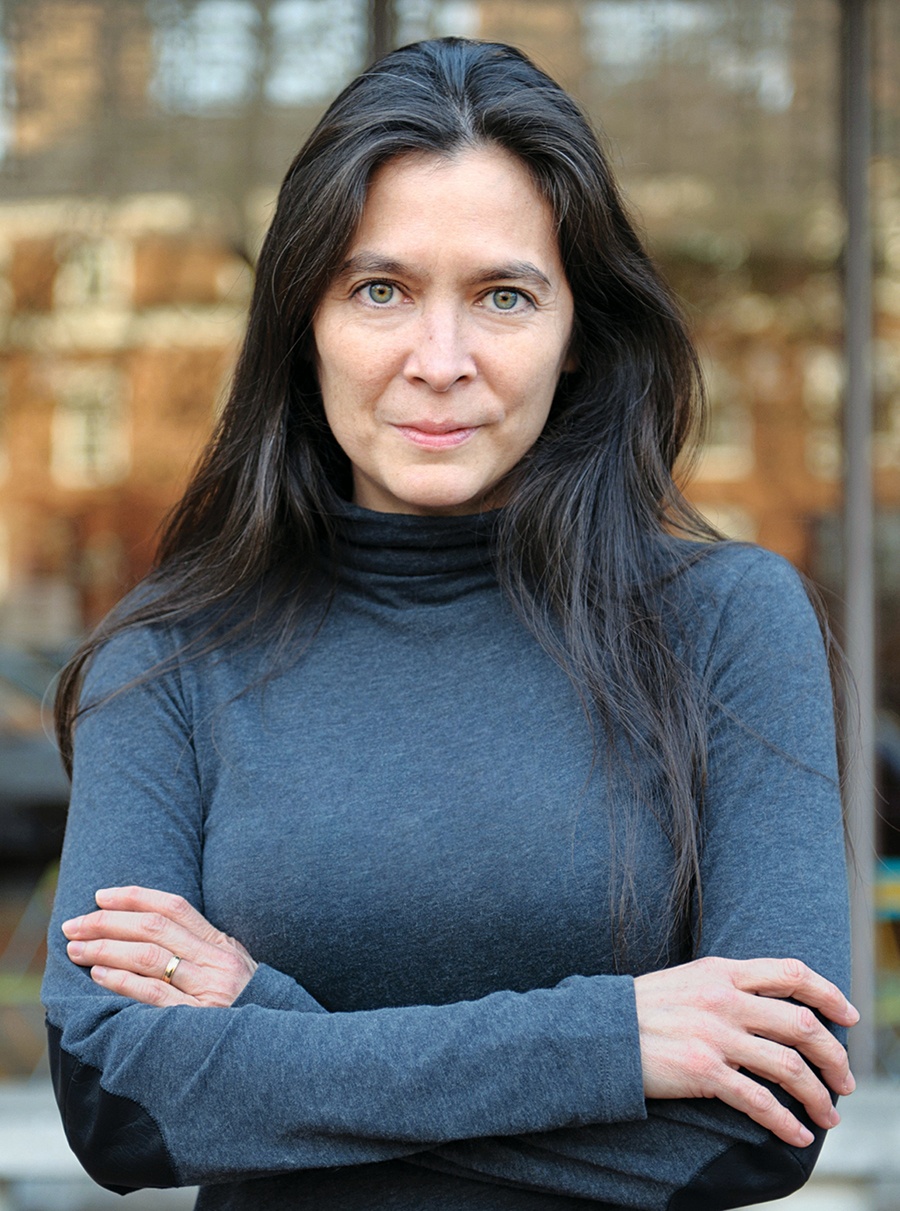 If you want to get Diane Paulus excited, I mean really excited, feel free to skip all the theater stuff. Sure, she routinely sends American Repertory Theater shows from Boston to Broadway, but that’s not what she’s dying to talk about in her office overlooking Harvard Square. “It’s one of my proudest moments,” she tells me, hoisting a picture of a sandwich board from the burger joint Mr. Bartley’s. There, scrawled alongside the Beyoncé burger and the Gay Marriage burger, is the Diane Paulus burger. For the record, Diane Paulus loves the Diane Paulus burger, which includes a fried egg and maple syrup. “It’s really good,” she says, “because it’s the sweet and savory thing”—the very opposite of a jagged little pill, if you will. Which brings us to Paulus’s latest stage sensation.

What in the world made you want to turn Alanis Morissette’s classic ’90s album Jagged Little Pill into a musical?

The music is so visceral, and the lyrical content is so sophisticated and clever, and that’s what you crave in musical theater—lyrics that delight your ear and your mind. Sometimes when we think of Jagged Little Pill, we think about iconic Alanis Morissette, the angry rocker chick. But when you really get inside that album, and you listen to those songs, those songs are a cry for healing. How do you stop numbing yourself? How do we get through the pain and have the courage to just look inside? It starts with having the courage to cry out. We were going through the early phases of the creation right through the run-up to the 2016 presidential election and then post-election. She wrote the album 20 years ago and it just feels like these songs were made for right now.

Do you remember your first experience with the album?

Yeah, I think it was listening to “You Oughta Know,” and her vocal energy. The way she attacked those songs and the way it was so raw, the way she sang. That energy got me excited about what, theatrically, that could feel like on stage. And for me, I had a notion in my gut that this show had to break the fourth wall. This is not an interior experience that we sit in the dark and watch. Every time I was visiting the album and developing the original story with writer Diablo Cody, I was always asking what a modern Greek piece of theater would feel like as a musical. Because I’m obsessed with Greek theater. And this feels Greek.
This is epic Greek.

It’s somewhat infamously a breakup album. How do you expand that into a broader story?

Well, that’s where collaboration comes in. We were lucky enough to get Diablo Cody (Juno, Young Adult) to sign on because she had a window to work on this, and lo and behold, she was a super fan of the album. She started pitching ideas to me, and they were deeper and broader than just a regular story. And right away, I said, “I get it. Let’s go with that.” Diablo happens to be a mom now with three kids, and Alanis is a mom with two kids, and I’m a mom with two kids, and the three of us were vibing off of experiences from our personal lives and asking, How do we reenter this album?

How do you build a story when you have three people who are all invested?

I threw it over to [Diablo]. I said, “Go away and just go inside your arsenal of imagination and give me what you see.” And she came back, and she didn’t have the whole story fleshed out, but she had an idea of a character and how the show started. She was looking at key relationships of a family, and I got really excited. I could see it. I felt that was the right first impulse, and then she developed it. We kept talking. She made an outline. We brought it to Alanis. She said certain critical things that shaped choices we were going to make in the narrative. So, it just constantly went around and around. It was like building up the world of characters in the piece and then plotting it out, which Diablo is a genius at. And then the dialogue is in some ways the last thing that comes, and we continued to fix that and change that.

If you had to sing one song off the album for karaoke, which one are you going with?

Oh, my God. It’s a hard question for me to answer because I know how tricky those songs are to sing. I love “Perfect” on that album. It’s amazing. I think she sang that in one take when she created that. It’s such an amazing song and it’s heartbreaking and I couldn’t sing it, but I would try.

Did you ask Alanis about the rumor that “You Oughta Know” is about her relationship with comedian Dave Coulier?

We’ve never talked about it.

Your restraint is impressive.

You know what, frankly, you can read about it. So, you read about it, and then we were on to a different level of connecting to the music.

What do you like to do for fun when you’re not immersed in theater?

I love going to see the Red Sox. One of the first shows I did here was called Johnny Baseball, which was about the integration of African Americans into baseball, and I hadn’t been to Fenway yet. The composers on that show told me I had to go to Fenway, so we went for one of the last games of the season. The Sox knew they were going on into the postseason, and they weren’t playing their stars. It was a meaningless game, they were losing, and it was bad. It was like 14–2. I’ll never forget, the inning wrapped, and one of the composers leaned over to me, because we heard this. [Claps slowly.] And he said, “You hear that? That’s ironic applause.” It’s like, good job Red Sox, well played—not! And I remember thinking, Ironic applause—what a concept! If I could only get an audience to exercise ironic applause, then I’ve accomplished something. So anyway, I’m always interested in the behavior at a sporting event.

You’ve worked in theater in both Boston and New York. Obviously, the scale is different, but how do you compare the two?

I love making work here in Boston. I think the audience is so willing to be a partner. Sometimes in New York you get a sense of jadedness because there’s so much work, and everybody’s seen it and done it all. But there’s a sense of appetite here in Boston for what the possibility of theater can be. I feel like there’s a spirit in this city of willingness to go on that ride, whether it’s Sleep No More or a show in a nightclub. The audiences here, they’re willing and excited. There’s a sense of adventure.

I love that there are so many college students in this city. That’s one of the reasons why I took the job. The future for the theater is tied to that next generation of audience. So, if I can come and make an experiment of what it means to run a great American theater and touch young people and college students, that will be doing more for the future of the arts in our form than what I create.

Boston is changing. There’s a sort of “new Boston”—the tech crowd and young money—and an old Boston. Do you find that the new Boston is as interested in supporting the arts and theater?

Well if they’re not, it’s our job to get them interested. My whole life I’ve had to advocate and think about why people should care about the arts. And I’ve had moments of saying, “Okay, how can I advocate for the arts when there’s poverty and cancer research?” It always felt like, well, the arts are always going to go last. I don’t feel that right now. I really don’t. I feel with more conviction than ever that the arts are so vital. Because what are we doing if we don’t have the space for coming together, especially in the theater, and analyzing and reflecting and experiencing in a way that is deeper than anything our phones can give us or the news can give us? Our goal is to create a space where you are actually invited to hear and listen and really identify across your points of view. That’s the art of the theater.

Given the limited pool of arts funding in Boston, are there concerns about larger entities getting the lion’s share of it?

I think that’s always an issue, and at the A.R.T., we are on a certain scale of operation. The Barr Foundation is an incredible organization here in Boston, and they are so good at creating different cohorts of size and scale and [providing support] with unrestricted funding to institutions. So, I feel like they’re a model foundation for how to invest in a whole ecosystem of culture in a community.

Where do you see room for improvement?

Where I feel Boston needs to increase its support of the arts is in the corporate sector. With all these new companies and tech startups, I want to see partnerships happen, and not just in which they are supporting the arts as a means of marketing, but real partnerships between the corporate sector and not-for-profit art institutions. Certainly, here at the A.R.T., that’s the one area that is woefully small—like, shockingly small. But we look at that as an opportunity for growth, so I’m hoping that we’ll see some more of that happen as more companies come here and understand that the arts are what make people want to live in Boston, as well as their new company and the sports teams and the beauty of New England. This is a great arts town. There are massive, amazing, world-class arts institutions here, so I think the corporations that choose to come here need to value these as resources and an extension of their own companies in terms of what makes this city great.

You’re celebrating your 10-year anniversary with the A.R.T. this spring. How would you describe that journey?

It has been 10 years of straddling these different worlds, as a director and as an institutional leader. From the minute I got here, I felt that the fact that I was an artist was critical to what I wanted to do institutionally. I came of age in the 1990s, when the National Endowment for the Arts was really being diminished, and I was always wanting to look at budgets and was always asking, “How can I help you save money?” So it has been this merger of my experiences—I want to think about the business, I want to see the budgets, I want to help engineer value. That for me has been the journey over these last 10 years.