Robert Kraft, Meek Mill, and Gucci Mane Hung Out at the Celtics Game

The Patriots owner sat courtside with the rappers, and Twitter had a great time riffing on the trio's interactions. The Celtics came back to beat the 76ers in the second game of the series. 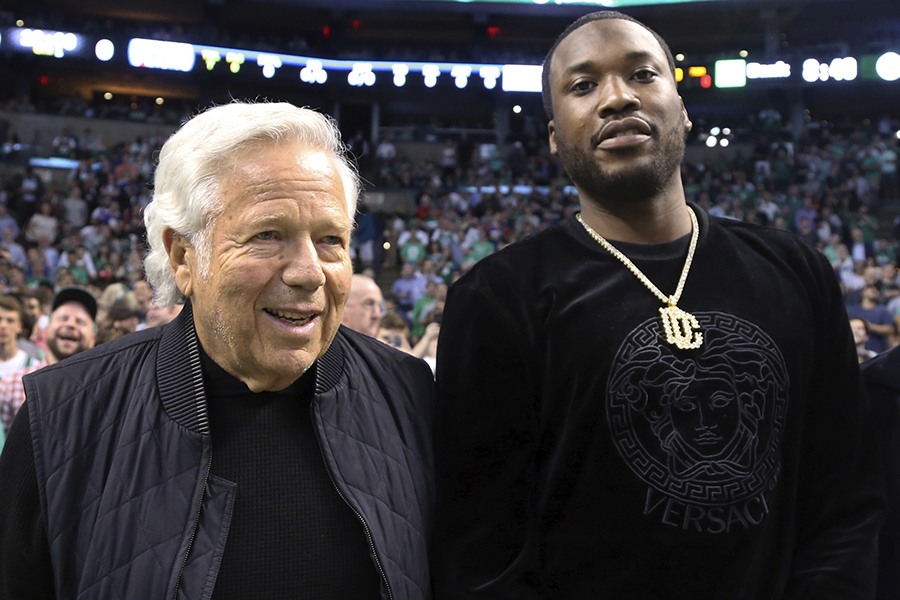 Stop us if you’ve heard this one before: Gucci Mane, Robert Kraft, and Meek Mill walk into TD Garden…

No, wait. No one’s ever heard that one before, because it’s a head-scratching combination of folks who would only find themselves in the same row of an NBA playoff game in the freaky parallel universe that is the year 2018.

And yet, here we are. At last night’s Celtics-76ers playoff game, the Patriots owner sat courtside with Mill, the Philadelphia rapper whose release from prison he advocated for last month. The pair was joined by Mane, who donned a Jaylen Brown jersey and a Celtics hat.

At one point, the rappers, flanking Kraft, had a conversation that literally went over the 76-year-old Patriots owner’s head. Kraft looked distressed, out of sorts, and ultimately very confused as he tried to keep up with the chatter. Twitter loved it.

Meek: I’m cutting his hair
Gucci: No, I am
Kraft: pic.twitter.com/IImQpkU4iW

Robert Kraft looks like someone’s grandfather who got lost on his way back to his seat and joined a random conversation pic.twitter.com/hf2zIBPGN7

Meek: Let me tell you what’s up with Colin Kaepernick ..

Meek: NFL owners are trying to keep him out the league for fighting for criminal justice reform, even though some of them are out here posing with us, trying to look cool.

Also in the crowd was the comedian Kevin Hart, a Philadelphia native, who had the audacity to laugh at Brown when he missed a foul shot.

The Celtics got the last laugh, though, as they mounted an impressive comeback to capture the W in the second game of the series.