The BSO Youth and Family Concerts Conductor leads the orchestra with a young audience in mind. 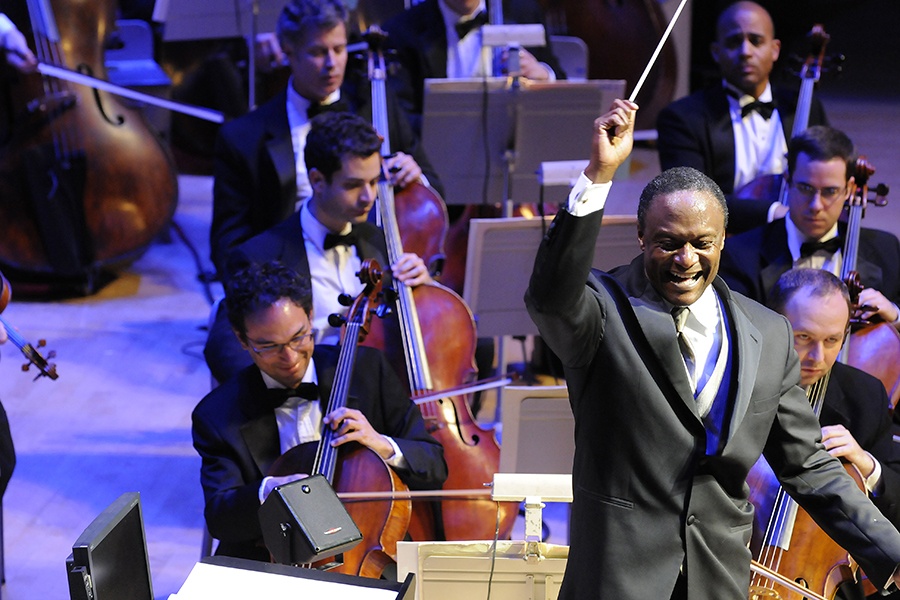 A trip to the symphony isn’t just an exercise for adults in Boston—at least, not when Thomas Wilkins is in town. The BSO Youth and Family Concerts Conductor takes on the tricky task of making classical music cool for kids without dumbing anything down. Wilkins, who has been with the Pops since 2010, weaves together music and storytelling with younger audiences in mind, and he’s poised to conduct the orchestra’s upcoming “Best of the Boston Pops” concerts on May 22 and May 25. When he’s not in Boston, you can find Wilkins directing the Omaha Symphony, the Hollywood Bowl Orchestra, or just on an airplane jet-setting from one gig to the next. We talked to the conductor about his journey to the Pops, how he prepares to play for young audiences, and the lessons he hopes to impart on concert-going kids.

Why did you decide to pursue conducting?

I was 8 years old, and went to a symphony orchestra concert in my hometown of Norfolk, Virginia, and I didn’t really have the words to describe the impact, but I knew that what I was hearing somehow knew me. I liked the fact that this man, whose name was Russell Stanger, was standing in the midst of all this sound. I had never heard this sound before, of this thing called the orchestra, and I loved the fact that he seemed to be intimately, personally, spiritually involved. I didn’t have those words at 8 years old, but I loved his connection to that music that I was hearing, and I thought, “Man, that would be fun to be able to do that.” So from that day forward, I’m literally living my life’s dream.

How did you secure your role with the BSO?

I knew one of the players, Cindy Meyers, a piccolo player, from her days at the Houston Symphony, and I knew that the players weren’t all that thrilled with the young people’s concerts at the current time. And so Cindy came home complaining, and her husband said, “Why don’t you have them call Tom Wilkins because at least they can see what it’s like when someone who really loves doing it does it?” And sure enough, one thing led to another, and they invited me, and I did a concert there. I remember [BSO managing director] Mark Volpe came to my dressing room and said, “I don’t even have to ask how it went because I’ve never seen so many players lined up outside the conductor’s dressing room before.”

How does conducting the Pops differ from your work with other orchestras?

I happen to be fortunate enough to be pretty versatile. No two weeks are ever the same. … And I think what I have discovered is that, in the course of the year, not only am I comfortable in all different types of repertoire, but I actually enjoy it equally. I’ll have as much fun in Boston doing the Pops as I will the following week doing Beethoven 9. It’s just two different sound worlds, for lack of a better way to put it. But it’s all still music… And the neat thing is that I’ve not been pigeonholed. No one calls me a Pops guy or a ballet guy or a classical guy… they just call me, period, when they want something done.

Do you do anything differently when you’re preparing to conduct an orchestra that’s performing for a younger audience?

Nope. Well, that’s not totally true. My young person’s concerts are about life, and we use music as the tool to teach life skills to children. Sure, they’re learning something about music, but I think it’s more important that they learn about a sense of teamwork or community or exploration of the American nation or how to dream big or whatever it is. [It’s less about] how many flats are in the key of E flat or how many piano concertos Beethoven wrote. That doesn’t change a kid’s life, but understanding that music is a gift that allows us to be a part of something that’s bigger than us, and therefore dream differently about ourselves and believe differently about ourselves, is real gift of music for all of us, regardless of what our age is. It’s just that when I do it for children, I’m targeting what life lessons I want to teach, what story I want to tell, specifically. Which means that they hear the same music at a young person’s concert as the grownups will hear. I don’t dumb anything down here or do anything slowly because they’re 8-year-olds. They’re 8-, 9-, 10 year olds—they know what seriousness is if you invite them to it.

I’d have someone else do my packing. I fly every week. … I live in Florida, but I work in Omaha, Boston, Hollywood, and Bloomington, Indiana.

Any funny anecdotes or something surprising that’s happened on stage?

Once I had a little girl come up on stage to conduct the orchestra. I invited her up. She must have been in the fourth grade or something. And I’m going to guide her hands to show her how the beat goes… so I guided her hands, I had her hand in mine, and I said “oh, I’m going to let go,” and I let go, and then she kept waving her arms, and looked at me and said, ‘that’s it?’ And I just cracked up.

What’s a piece of advice that’s stuck with you over time?

One of the things that I tell kids a lot and that’s really stuck with me is that wishing without working only leads to disappointment. And I’m big on dreams, because you know, I was a kid going through housing projects with a single mother on welfare and here I am conducting all over the globe. So I’m really big on what it means to dream, but somewhere along the lines, someone has to say, ‘Dreaming is great, but if you don’t work, dreaming leads you nowhere.’