Julian Edelman and Devin McCourty Presented at the Grammys

No days off for the Super Bowl champions. 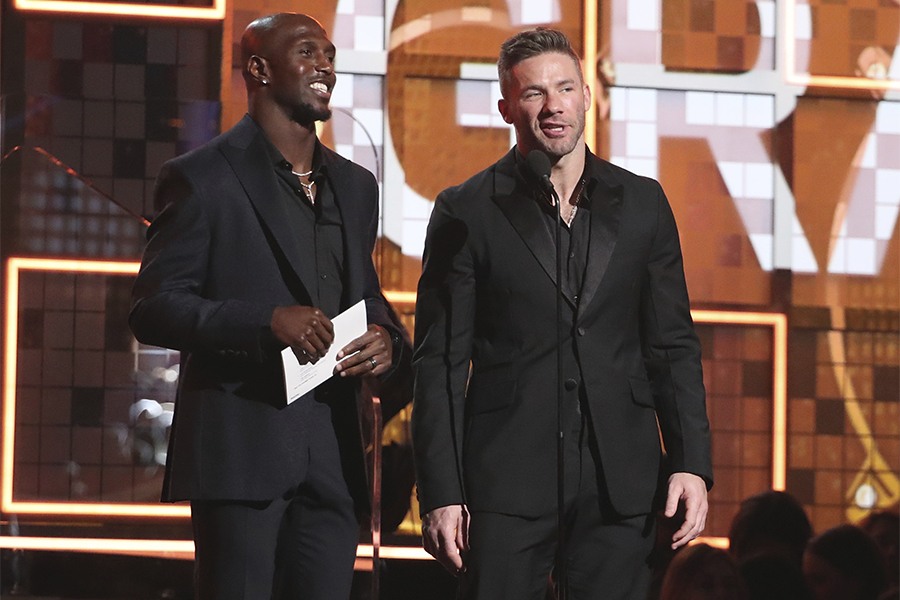 The offseason has been tough for the Patriots. Gronk is recovering from a severe beer can injury; Tom Brady is busy answering questions about Gisele and her potential witchcraft.

But Julian Edelman and Devin McCourty have taken no days off from the spotlight. The pair appeared onstage at the Grammys—yes, in Los Angeles—just a week after their Super Bowl win over the Rams to present the award for Best Pop Duo/Group performance.

The award, the first of the night, went to Lady Gaga and Bradley Cooper for “Shallow,” the highly screamable hit from 2018’s A Star is Born remake.

The Patriots superstars knew they were in enemy waters, but the general ambivalence of the crowd proved yet again that L.A. just doesn’t care about football.

Edelman chimed in to announce they were going to present “a very Super award,” although the reference may have flown over the heads of the Southern California crowd—the game is so last week.

The Super Bowl MVP was looking fresh on stage, newly robbed of his beard by Ellen DeGeneres in the name of a $20,000 donation to the Boys and Girls Club of Boston. He apparently coordinated outfits with his teammate—he and McCourty fitted right in with the sleek L.A. crowd in black on black suits.

Neither Patriot opted for a tie, but McCourty kept it glamorous with a nice and subtle silver chain.

Edelman and McCourty weren’t the only Bostonians at the 61st Grammy Awards. The Boston Symphony Orchestra took home their ninth and tenth Grammys for their performance of Shostakovich’s Symphonies Nos. 4 and 11. It was the orchestra’s third Best Orchestral Performance award and their first ever for Best Engineered Classical Album.