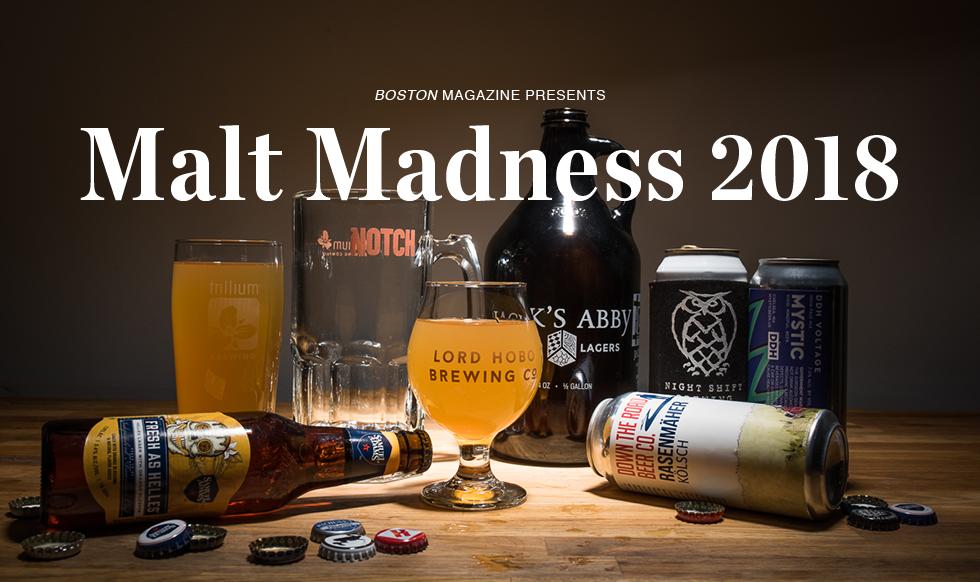 Styled and photographed by Chloe Grinberg

In the inaugural year of our Starch Madness bracket in 2015, we dared to ask: Whose spud game reigns supreme? In 2016 and 2017, we expanded our view to the broader spectrum of starchy satiation: The most craveable doughy, rice-filled, corny, and potato-based dishes Boston restaurants had to offer.

But this year, dear gourmands, we have taken a different path. Gluten still plays a big part, but we are asking the question: Which Massachusetts brewery is the mightiest? Which suds do drinkers thirst for? What beer is the best?

Based on research, ratings, and her own beer-loving knowledge, associate food editor Jacqueline Cain selected 64 breweries, from Orleans to Turners Falls, in four Massachusetts regions (as defined by the useful maps from the Mass. Brew Bros): Greater Boston, Northeastern, Southeastern, and Central/Western. Then, she seeded the conferences from 1-16, based on the average of the publicly available, drinker-submitted ratings from beer databases Untappd and BeerAdvocate.

With nearly 150 breweries dotting the Bay State, from brewpubs to commercial canneries and everything in between, this is a lofty question. And the reality is that everyone—Mass. residents, visitors, and beer-makers alike—benefits from the economic boon and community pride these businesses bring to their towns.

The Massachusetts beer industry, like the wider craft beer scene, is a convivial one, for good reason. Massholes have proven they love to drink local, and appreciate a wide array of choices. We want to continue to see breweries thrive in the Bay State.

We know some brewers and drinkers will scoff at pitting beloved brands against each other. Night Shift versus Harpoon? Exhibit ‘A’ facing Spencer Trappist? It will be tough to see some heavy hitters bow out, but that’s the game. We hope breweries and beer lovers alike have fun with this friendly competition, and that folks discover beer halls they haven’t visited and even brews they haven’t tried yet. There will be only one winner—and there will be a trophy—but truly, the healthy and exciting beer scene bubbling up in our state makes us all winners.

So pop open a cold one, and get voting.

The first round will end at 11:59 p.m. on Wednesday, March 7, with 32 breweries remaining. On March 15, we will announce the Sudsy 16. The Elite Ales (and Lagers) will be eight finalists left on March 22. Voting for the Final Pour—the leading brewery in each conference—will close Monday night, March 26, and then that Thursday night for the two finalists.

The two remaining breweries go head-to-head over Easter and Passover weekend, and we will announce the Malt Master on Thursday, April 5.

Vote with the tool below. To see the previous rounds’ matchups, click on the image of the bracket below.