Big Papi Got His Honorary Degree from BU

David Ortiz's was recognized for leadership at Sunday's commencement.

The year after he retired as the renowned slugger for the Red Sox, David Ortiz was recognized by Boston University with an honorary degree on Sunday, May 21.

Before giving him the degree, BU President Robert Brown listed some of his stats, including a .455 World Series batting average and 451 home runs, which “tell the story of baseball’s greatest designated hitter.” He also referenced Ortiz’s philanthropy, his team leadership, and his role in comforting Boston following the marathon bombings as reasons for granting the star a degree.

Ortiz did not give a speech. But he did lean into a nearby microphone and say, “Thank you very much.” And the crowd erupted in cheers. 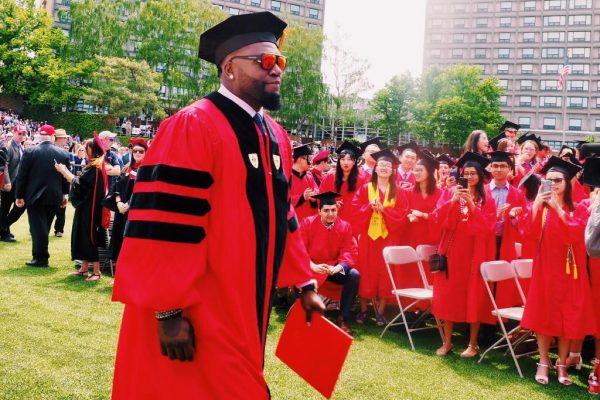 He was one of five recipients of honorary degrees, a group that included Mario Molina, the Nobel laureate and climate scientist.

The commencement speaker for the ceremony, which was held at BU’s Nickerson Field, was given by Bonnie Hammer, the chairman of NBCUniversal Cable Entertainment Group. Hammer recalled her career working with some of the biggest names in media, among them the Kardashians and stars of the “Top Chef” franchise, and encouraged students to get outside ideological bubbles.

“In this moment of polarization, it’s more important than ever that we pay attention to each other’s stories,” she said.