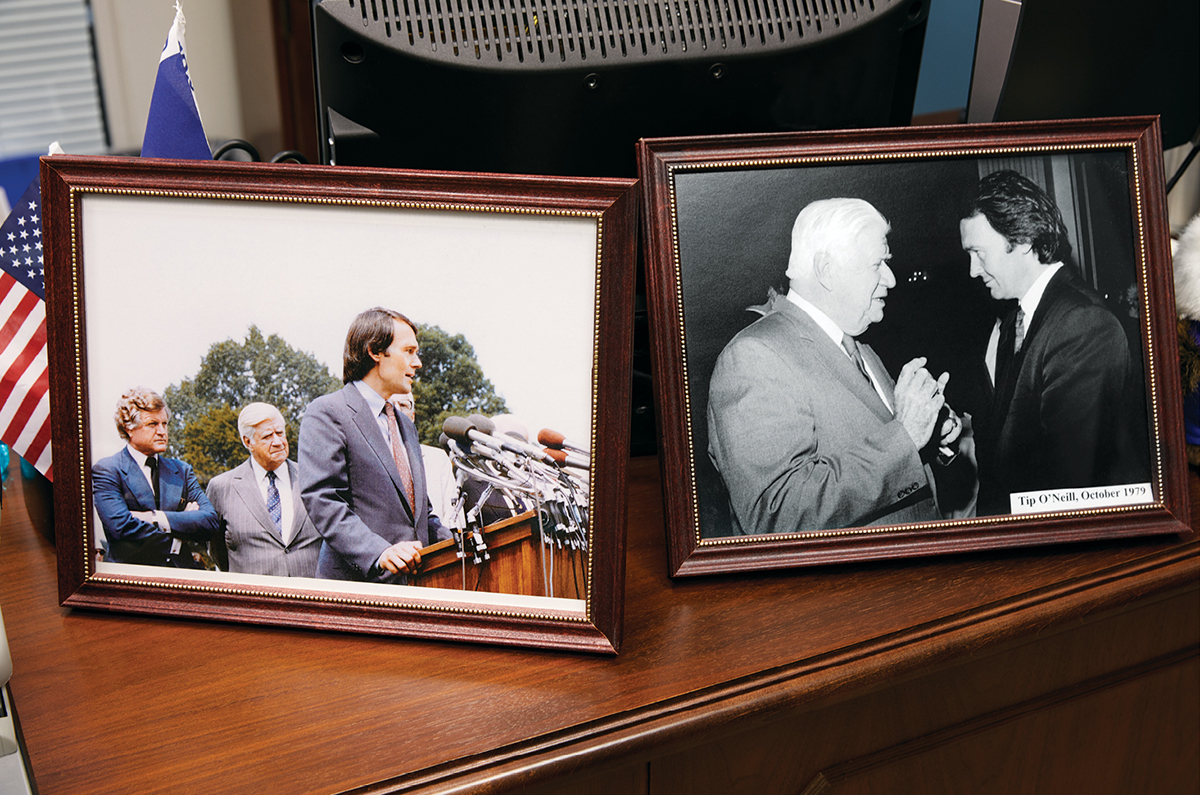 Framed photos of Senator Ted Kennedy and Speaker of the House Tip O’Neill offer a window into Markey’s long history in politics. / Photograph by Chris Buck

Markey was just getting going. In the summer of 1976, near the beginning of his second term as a state rep, he mobilized an army of teenage and twentysomething volunteers and defeated a dozen established Democrats in a race for Congress. That fall, at 30 years old, he traveled to Washington for the first time and was sworn in as a U.S. congressman.

He was still an outsider. But as a member of the powerful Massachusetts delegation, led by Speaker of the House Tip O’Neill, he had an inside track to congressional power. Over the next three decades he earned a reputation as a prolific and effective dealmaker, passing one reform after another in healthcare, telecommunications, and energy policy. By the time Obama was elected president—bringing Democratic congressional majorities with him—Markey had reached the height of his political powers, and he took on his most ambitious legislative project yet: a climate change bill that would implement a cap-and-trade plan and cut the country’s carbon emissions. By all accounts, Markey was critical in getting the bill passed. “Eddie was the guy,” says Mike Doyle, a Democratic congressman representing Pittsburgh. “It’s not to downgrade Henry,” he says, referring to Henry Waxman, the bill’s co-author, “but Eddie was the one who connected with the members who needed to be connected with.”

Markey and Waxman ultimately assembled an unlikely coalition of progressives, moderate Democrats, environmentalists, utility companies, and a handful of Republicans to support the bill—and successfully pass it through the House. “It was incredibly ambitious,” says Eric Pooley, a former journalist who wrote a book about the bill, known as Waxman-Markey. “If you look at the previous attempts at climate change legislation, they failed miserably.” Later, he adds, “Markey and Waxman are the only legislators who have succeeded in writing major climate legislation that passed. That’s nothing to sneeze at.”

Once the bill moved to the Senate, though, it was beyond Markey’s control. Bogged down by Obamacare and the financial crisis, Senate Democrats could not muster enough votes and the bill died. Markey was crushed. He describes Waxman-Markey’s failure as the “top” disappointment of his career—and the collapse of one his longest-held objectives, passing sweeping climate change legislation.

There would not be another chance. In the landslide midterm elections of 2010, the Democrats lost dozens of seats. The short but heady era of Democratic majorities and dreams of progressive legislation was over.

Markey’s Senate office is set up as if he spends his days waiting for someone to arrive for an elaborate game of show-and-tell. As he speaks, he circles the room picking up props: a photo of his father in his milk-delivery uniform; the front page of a newspaper showing him at age 30, newly arrived in Washington; a copy of Dreamland—a book on the opioid epidemic—stuffed with dozens of pages of notes. “Did I show you this?” Markey asks, steering me toward a wall decorated with a 1989 vintage solar panel the size of a kitchen table. Below it is a row of line charts. Each one is pointing up, indicating progress in the renewable-energy industry—a cause Markey has spent decades working to advance from behind the scenes. “So you can see it’s going toward 200,000 megawatts in the United States,” he tells me. “One million megawatts globally.” He snaps his fingers repeatedly as if to mark the fast rhythm of change.

The main event of Markey’s tour is his conference room, where the walls are lined with framed copies of the laws he has written and helped to pass. There’s the Affordable Care Act mounted next to a photo of Markey smiling with Obama and congresswoman Nancy Pelosi. “I have in the bill a very important change of law” related to Alzheimer’s treatment, he tells me. Next to it is a 2007 energy law that helped increase automobile fuel efficiency standards. “That’s the revolution that’s leading to Tesla,” he says, snapping his fingers again. Next, he points to a framed document that overrode a George H. W. Bush veto. “I’m obviously very proud of that,” he says.

Watching him show off the framed laws, I’m reminded of a hunter boasting of the mounted heads in his trophy room. He betrays a kind of juvenile pride, but also nostalgia. Bagging this kind of big game—sweeping, reform-minded laws—is, at least for now, a thing of the past.

Today, Markey is playing a different game. With his party in the minority and Donald Trump in the White House, he’s forced to work at the margins, putting all his talents and knowledge to the test and affecting policy through old-school backroom politicking. The work requires some arcane skills, honed during his decades on Capitol Hill: knowing how to exploit the Senate’s byzantine parliamentary rules, for example, and capitalizing on long-standing relationships. “He’s an inside guy who’s learned how to work this ancient, at times suspect, seemingly decrepit process,” says WBZ’s Keller, who views Markey as a master in this arena. “It’s a classic evolution from bomb-throwing reformer to bomb-disarming insider.”

In other words, while Elizabeth Warren loudly and publicly attacks the Trump administration, an inside operator like Markey may be just the kind of junior senator his constituents need. “We’re using different tools,” Warren tells me. “Those can be nice complements.” Or as a prominent Boston business executive who has worked with both senators says, “He’s maybe not as dynamic a speaker as she is, but he definitely plays the inside game in Washington much more effectively.”

There are different ways to wield an insider’s influence. Lyndon Johnson, during his years in the Senate, physically loomed over his colleagues and threatened political retaliation if they didn’t get in line. Even Ted Kennedy could politically knock heads together when he had to. Markey’s tactics could hardly be more different.

In Washington, Markey is known for bouncing through the halls of the Senate greeting everyone—Democrat, Republican, it doesn’t matter—by bellowing their first name. At Christmas parties, he famously belts out carols. Ask the denizens of Capitol Hill to describe him, and many respond the same way: He’s a “happy guy”—not the usual description of a senator, especially in 2017. “Oh, everyone likes Ed,” Warren told me in her Oklahoma twang. Once, after a Democratic chief of staff escorted his senator into the chamber for a vote, the aide chased me into a stairwell just to say, unsolicited, “Markey is the best.”

Doing favors, winning friends, and convincing colleagues he has their best interests at heart comes naturally to Markey. “Sometimes [with politicians] that’s manufactured,” says Pooley, the journalist who wrote about Waxman-Markey. “But I think Markey genuinely likes people. He looks like he’s having fun. There’s a twinkle in his eye.” Perhaps most important, Markey’s popularity crosses the aisle, giving him a rare power: the ability to affect policy even when he’s in the minority. Joe Barton, an ultraconservative Texas congressman (“I was Tea Party before the Tea Party was cool”), at first found Markey’s showmanship—the turns of phrase, the props—grating. “I thought he was a pompous jerk, actually,” Barton tells me in his congressional office, a red Make America Great Again hat hanging on a coat rack right behind him. But ultimately Markey won him over. “I realized how smart he was,” Barton says, “and, from a liberal perspective, a lot of what he said made sense.”

The two struck up a productive friendship, which has paid dividends. Together—relying on the credibility that comes with bipartisan action—they’ve carried out a letter-writing campaign that has shamed big tech and telecom companies into releasing information about consumer privacy. Whenever he can, Markey greases the wheels of his Capitol Hill friendships with favors. The same afternoon I met with Barton, Markey had helped him out with a bit of legislation. A bill Barton had passed in the House was stuck in the Senate. “Senator Schumer”—the Senate’s Democratic leader—“didn’t want to move any bills at all,” a Barton staffer told me. Markey offered to help out. A few hours later, the bill went to the Senate floor and passed. Markey, the staffer said, “was one of the parties that made this happen and made it happen fast.”

Meanwhile, Markey is working with another unlikely ally in the Senate, James Inhofe, an archconservative from Oklahoma. Their politics are as different as can be. Markey considers climate change “the most pressing moral issue of our time.” Inhofe, for his part, once carried a snowball onto the Senate floor to show that global warming was bullshit. “We’ve been debating this issue for 25 years,” Markey says. “It’s reached a point where we have to just leave it there and look for areas where we can agree.”

Warren has taken a different approach, publicly calling out Inhofe’s climate change shenanigans. “I’ll go to dangerous,” she told the Globe in a 2014 interview, as she calibrated her attack. “I’ll go all the way.” Markey’s restraint, by contrast, has created opportunities. Against all odds, he is currently working with Inhofe on legislation related to pollution. Their bill would extend funding to clean up abandoned industrial sites—known as brownfields—so they can be put to economically productive use as condo developments or new factories.

This isn’t sexy stuff. Even if it passes, it’s hard to imagine it will attract much attention. But it could make a difference to some beleaguered western Massachusetts towns. Just as important, these kinds of small-bore projects bolster Markey’s connections to the ruling party. “Maintaining a bridge of communication,” he tells me, “is absolutely essential in the legislative process.”