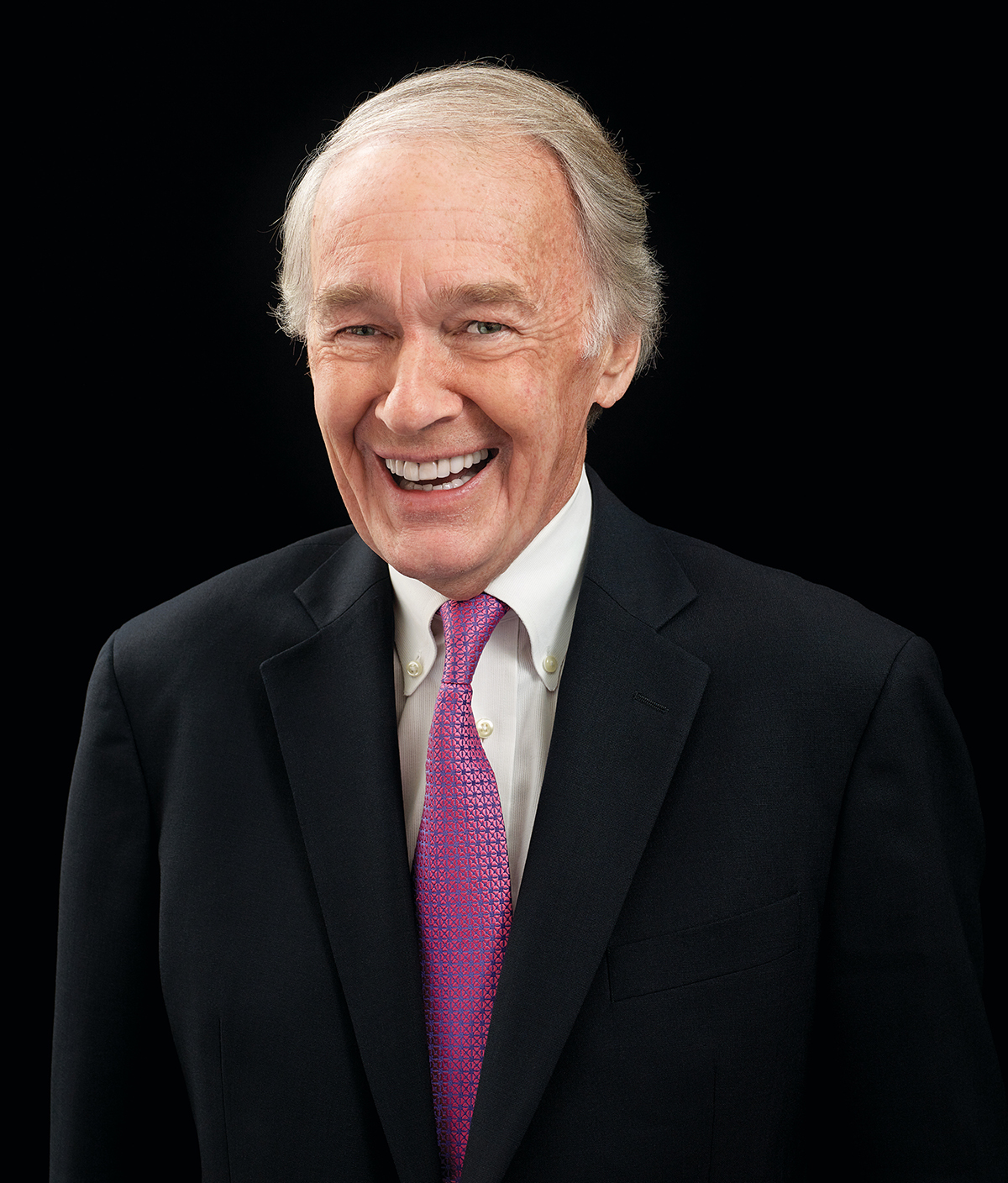 “Where are we going?” Ed Markey asks. The senator and I are speed-walking behind one of his staffers out of the Capitol and onto a vast stone plaza. It’s July in DC and it feels like a hundred degrees. Without responding to him, the staffer answers a phone call and keeps walking. She has a schedule to keep, shuttling Markey from hearings, to votes on the Senate floor, and now to…well, he isn’t quite sure.

“So why don’t you outline what is unfolding?” Markey suggests, trying again. He’s taking long, Gumby-like strides. The extra fabric in his loose-fitting suit billows as he moves. His hair is styled precisely the way it has been since the 1970s: long in the back and shaggy on the sides. GQ would not approve.

“Planned Parenthood rally,” the staffer says without breaking stride. “You know, Trumpcare is bad. The repeal effort is bad.”

It’s the middle of a crucial week for Donald Trump’s administration, and the nation. Republicans have, once again, resurrected their attempt to repeal and replace Obamacare. For Democrats, this means all hands on deck. Their votes don’t count for much, given that they’re in the minority and the chance for bipartisan action is precisely zero. But it is the perfect time to score political points and fire up the base.

I see Hillary Clinton’s former presidential running mate, Virginia Senator Tim Kaine, hustling toward us. He has just spoken at the rally himself.

“Jesuits gonna come out here,” Markey shouts in Kaine’s direction. He’s trying to muster a quip about their shared Catholic faith. “Out here. Over here….” The line fails to materialize. Kaine is gone. We keep walking.

In the first hours I spent with Markey, there was a lot of this: jovial, head-in-the-clouds bonhomie. He trailed off, loudly cleared his throat, and interrupted himself mid-sentence to greet friends passing by. He sometimes seemed not to know where he was going next. (In his defense, a typical senator’s day is a rat race planned on the fly and coordinated by a half-dozen smartphone-wielding aides.) The impression he gave was of a benevolent goof.

I had traveled to Washington to check in on the man who can only be regarded as Massachusetts’ other United States senator—the one who doesn’t have a national reputation and possible designs on the presidency. In a state with a long history of producing high-profile politicians, Markey has often been overshadowed and ignored—even after he left the House of Representatives in 2013 to fill John Kerry’s seat in the Senate. “Let’s be honest,” says Mike Capuano, who represents Massachusetts’ seventh congressional district. “Anyone who took that seat would have to live under the shadow of Ted Kennedy and John Kerry and the governor and the mayor of Boston and Elizabeth Warren. Those are pretty big shining stars.”

Still, it’s remarkable how anonymous Markey is. Yes, the electorate knows his name—the guy’s been representing Massachusetts in Washington since the Gerald Ford administration—yet the average voter probably can’t tell you a single thing he’s done. When Markey does show up on the public’s radar, he tends to raise eyebrows.

For one thing, he has a weakness for kooky props. He has displayed—and read from—Dr. Seuss’s The Lorax on the Senate floor. Last year he lugged a cable box wrapped in chains into a hearing on TV regulations. He also has a weird habit of coining playful acronyms. He likes to say that Republicans mistakenly believe LGBT stands for Let’s Go Back in Time. He has identified a new mental condition, PTSD, or Post-Trump Stress Disorder. He claims the GOP, with its Medicare-cutting healthcare proposals, is out to Get Old People.

When it’s not an acronym, it’s a corny turn of phrase. “You don’t have to be Dick Tracy to figure out what’s going on,” he said to open a recent CNN monologue on potential Russia collusion in last year’s election. In political circles, these tics have become famous, and eye-roll-inducing. “I wish to God he would can it with the little aphorisms and the rhyming slogans,” says Jon Keller, the longtime Massachusetts political analyst with WBZ-TV and radio. “They were cute the first 150 times. Now they’re just annoying.”

Occasionally, Markey goes off the rails entirely. In May he joined the dishonor roll of left-wingers who have been duped by Russia conspiracy theorists. Speaking on CNN, he falsely claimed that a grand jury had been impaneled in New York as part of an investigation into alleged cooperation between the Trump campaign and Russia. (Markey told me that a staffer had mistaken a “report” from a conspiracy-minded blog as real news and briefed him on it before his live interview.) His aides spent the rest of the afternoon on damage control.

When Barack Obama was president, and our government seemed more stable, voters could have been forgiven for not paying much attention to their junior senator. A Massachusetts Democrat could count on Markey as a reliable rubber stamp for left-leaning policies. (Republicans, on the other hand, will find little to cheer in Markey’s voting record.) But today—with a neophyte in the White House, our government lurching from one crisis to the next, and the Senate kicking into overdrive as a check on the executive branch—the political stakes are higher. So it seems fair now to ask: Is this guy really the best we can do? 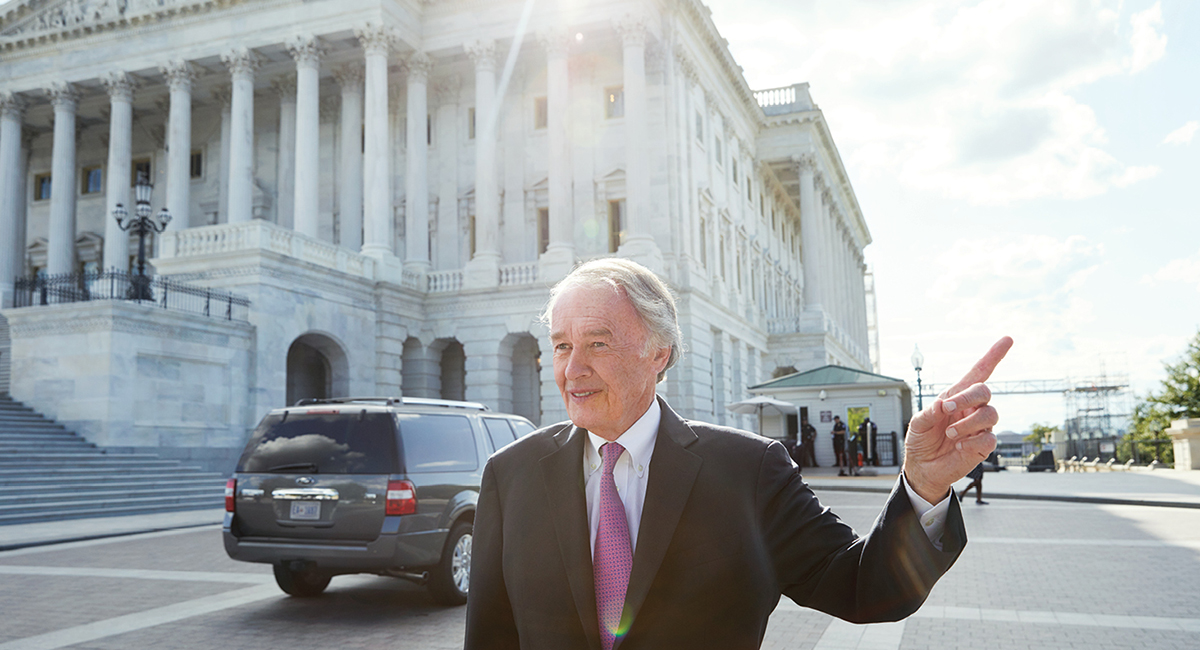 As soon as Kaine is out of earshot, Markey pauses and explains his line that failed to launch. “Timothy and I are both Jesuit-trained,” he tells me. Irish-Catholic, Markey speaks frequently—and fondly—of his years studying at Malden Catholic High School and, later, at Boston College, at the time a humble commuter school. Growing up in a working-class family in Malden (his father was a milkman), Markey was indoctrinated early into the local institutions. “In Malden,” he’s said a thousand times, “you were born a Democrat and a Red Sox fan and baptized Catholic seven days later.”

Throughout his career, Markey has never quite disentangled his politics from his faith. “My basic text for everything I do is the Sermon on the Mount,” he tells me as we walk to the Planned Parenthood rally. “Blessed are the poor. That’s Medicaid,” he says. “Blessed are the elderly. That’s Medicare. Blessed are the children. That’s Head Start. Blessed are those in prison. That’s making sure we don’t imprison a whole generation of African Americans the way we did with the crack cocaine epidemic.” This is the gospel according to a purebred Massachusetts liberal who came of age when the Kennedys and Catholicism still shaped the state’s politics.

Markey entered the state legislature as a 26-year-old recent law school grad representing Malden. It was 1973, and the Watergate scandal was raging. Like other young politicians of his generation—some became known as the “Watergate Babies”—he dreamed of instilling virtue into politics by taking on entrenched interests. “It appealed to me how the legislature was a check on the president,” he practically winks.

From the start, the tall, good-looking kid with a hippie mop of hair showed a flair for politics to go with his youthful idealism. “He’s always been a challenger, a maverick,” says George Bachrach, who ran Markey’s first congressional campaign. Once on Beacon Hill, he took on the powerful Democratic leadership to close a much-abused loophole. At the time, lawyers and politicians could work part time as judges, which presented countless opportunities for patronage, corruption, and conflicts of interest. Markey assembled a coalition of reform-minded representatives and abolished the practice—in defiance of his party. “He’s always been engaged in uphill fights,” Bachrach says.