Brockton Mayor Challenges Philadelphia to Battle of the Rocky Statues

A Super Bowl-related wager is on between the cities' boxer statues. 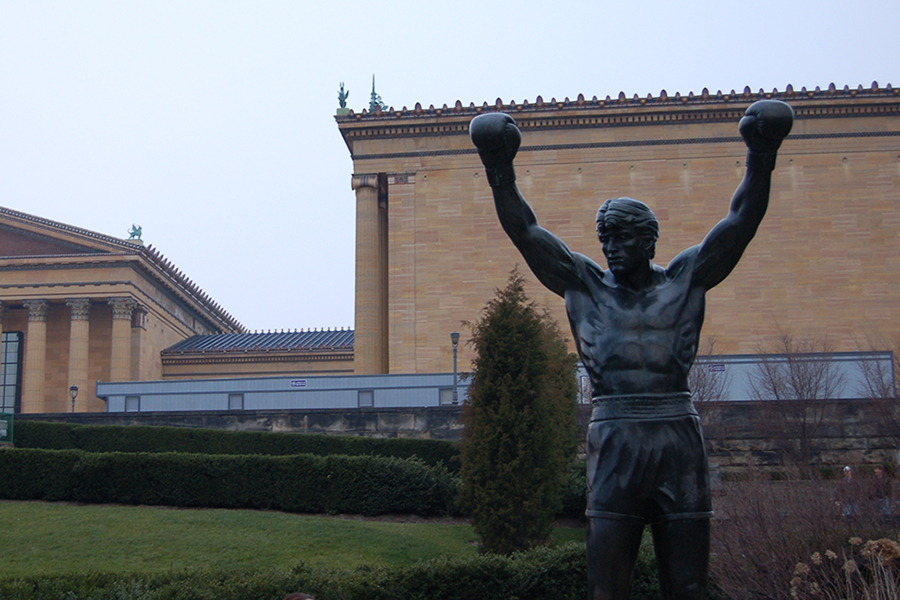 He’d look great in a Pats jersey. Rocky at Philadelphia Museum of Art by Ian Carvell on Flickr/Creative Commons

The mayor of Brockton has boxed himself into a bet with Philadelphia’s chief in the hopes that the Eagles will face a rocky road next Sunday against the Patriots.

Though the City of Brotherly Love may be famous for its iconic Rocky Balboa statue, it’s not the only municipality to honor a boxer named Rocky. A Rocky Marciano statue stands outside Brockton High School, and Mayor Bill Carpenter is betting his city’s pride on Touchdown Tom.

On Wednesday, Carpenter challenged Philadelphia Mayor Jim Kenney to the “Rocky v. Rocky Super Bowl wager,” whereby “the losing Rocky will wear the team garb of the Super Bowl LII champs.” Kenney accepted, Enterprise News reports, and in addition to the decked-out statue, the winner will also receive some of the loser’s local alcohol. If the Pats pull out the W, Carpenter will enjoy a keg of Yards Brewing Co. beer, and if the Eagles prevail, Kenney will be treated to some Rocky Marciano brand wine.

The “Rocky v. Rocky” Super Bowl wager is on w/ @PhillyMayor Jim Kenney. The losing Rocky will wear the team garb of the #SuperBowlLII Champs! Mayor Kenney will also put up a keg of “Yards” beer against our Rocky Marciano wine. @stevedamish_ENT @Patriots @JoshBrogadirTV pic.twitter.com/XbbGsHCOPQ

The Rocky Balboa statue—and the immortalized steps in front of it—stands in chiseled bronze at the base of the Philadelphia Museum of Art. As one of the most popular tourist attractions in the city, a lot of people would definitely notice if ol’ Balboa were to don a Tom Brady jersey. Meanwhile, the Rocky Marciano statue honors the former heavyweight champion known as “the Brockton Blockbuster.” Marciano held the world heavyweight title from 1952-1956, and he retired with a pristine 49-0 boxing record, which is not that different from Tom Brady’s playoff victory record.