Activists demanded answers from the Massachusetts legislature, as well as Governor Charlie Baker. 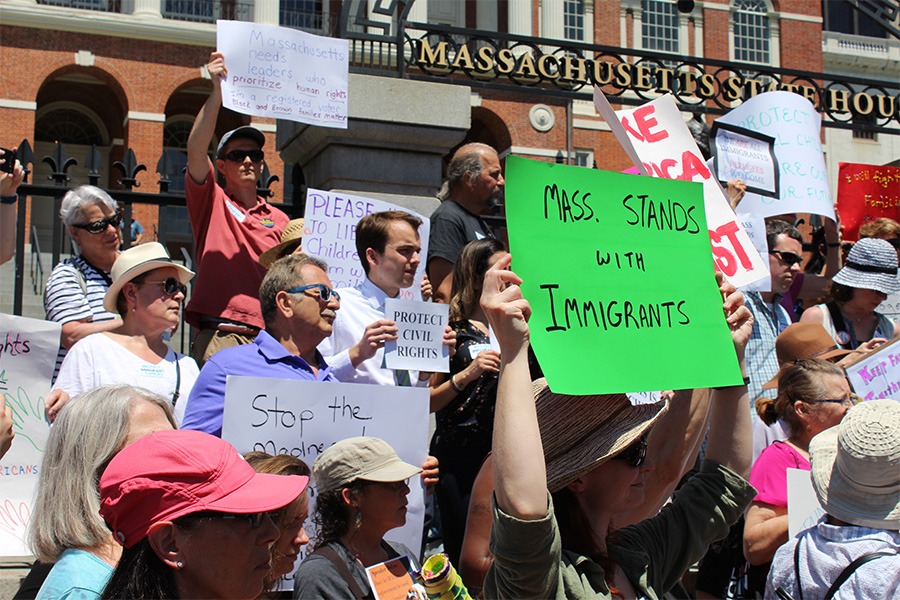 Protesters gathered today at the State House to demand immigration reform from the Massachusetts legislature. Thousands rallied on the street before heading inside, where they chanted for Governor Charlie Baker and Speaker of the House Robert DeLeo to come out and speak.

While the protest was taking place in Boston, President Trump signed an executive order to keep children and families together at the border in the face of widespread outrage from both ends of the political spectrum about a zero tolerance policy that had resulted in horrifying reports of children in cages.

The state senate passed a budget amendment in late May with a number of provisions to protect the state’s immigrants. It outlaws the creation of a state registry based on race or country of origin and requires that all people be informed of their rights before speaking with United States Immigrations and Customs. The amendment also prohibits Massachusetts law enforcement officers from asking residents about immigration status unless required by law and prevents them from entering into any contracts to train their members as ICE agents.

But the state house of representatives has yet to vote on the amendment, and Governor Baker has talked about vetoing it outright.

During the protest, the city council voted unanimously to pass a resolution condemning the White House’s immigration policy. While the resolution has no tangible effect on policy, multiple councilmembers—several of them immigrants or children of immigrants, and even more of them parents—spoke about the necessity of addressing the issue in some way, according to Universal Hub, with Councilor Ayanna Pressley saying, “We cannot be passive in complicity.” 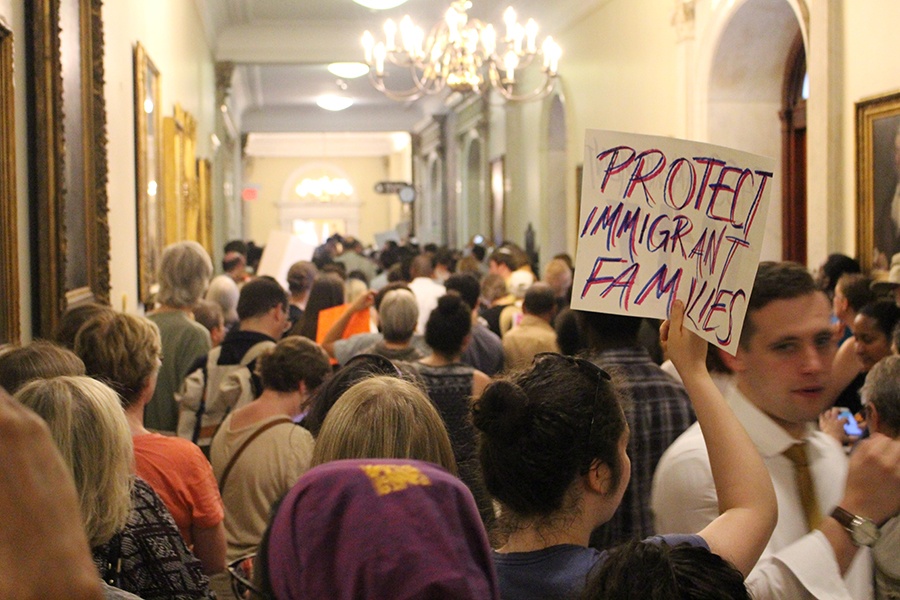 Over 1,000 protestors filled the halls of the state house. / Photo by Jules Struck

A representative for the governor told the Boston Globe he wasn’t in the building during the protest. His office issued a statement about the budget amendment, saying it did not “address the issue of creating clear guidelines for state and local law enforcement to work with federal immigration officials to detain violent and dangerous criminals convicted of heinous crimes like rape and murder, as the governor’s legislation would.” The office did not respond to a request for comment about the protest, however.

One speaker at the protest, Eduardo Samaniego, who is an undocumented immigrant and advocate for the Pioneer Valley Workers Center, said that though Governor Baker did not appear today, protests would continue for the next two weeks. “We cannot continue to see our families separated,” he said. “The crisis is also here at home.”

Several other speakers told their stories in between chants of “No justice, no peace!” and “No borders, no nations, stop deportations.” Rabbi Alison Adler from Beverly addressed the crowd and spoke of the dangers of passivity.

“My people know what happens when people don’t fight back against unjust treatment of human beings,” she said. “I’m here with my son as a mother, rabbi, American, and a human being who’s scared and outraged at things happening in our country.” She called what she saw happening at the border “contrary to morality.” 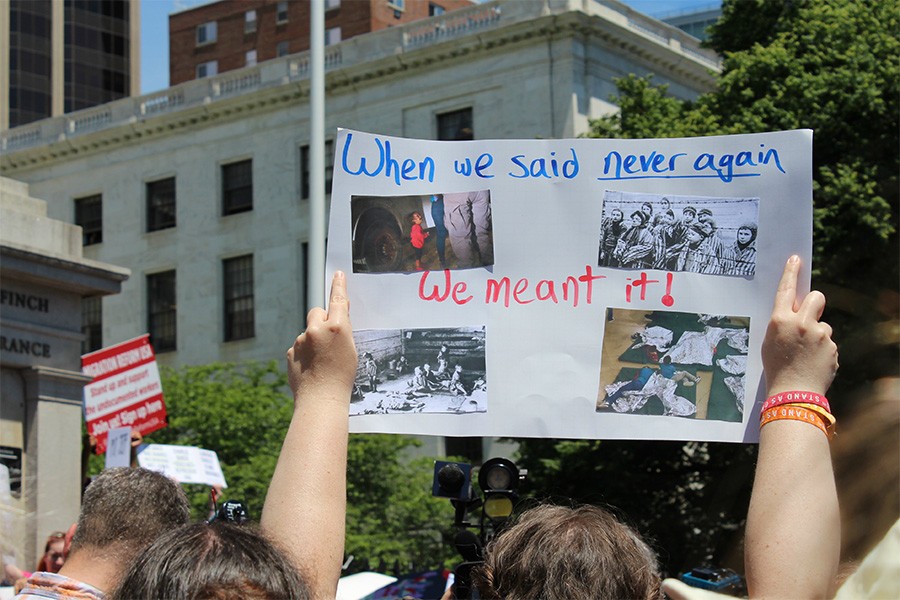 The protest attracted young and old alike, with many parents bringing their children along for the demonstration. Mothers could be heard explaining the situation in the simplest terms for the children wrapped around their legs.

“This is about kids’ rights,” said Linette Martyn of Arlington. “I know that families with children of color have to have this conversation, and it’s our responsibility as a white family to also have it, and be actively anti-racist. I asked my kids if they wanted to come, and they said yes.” 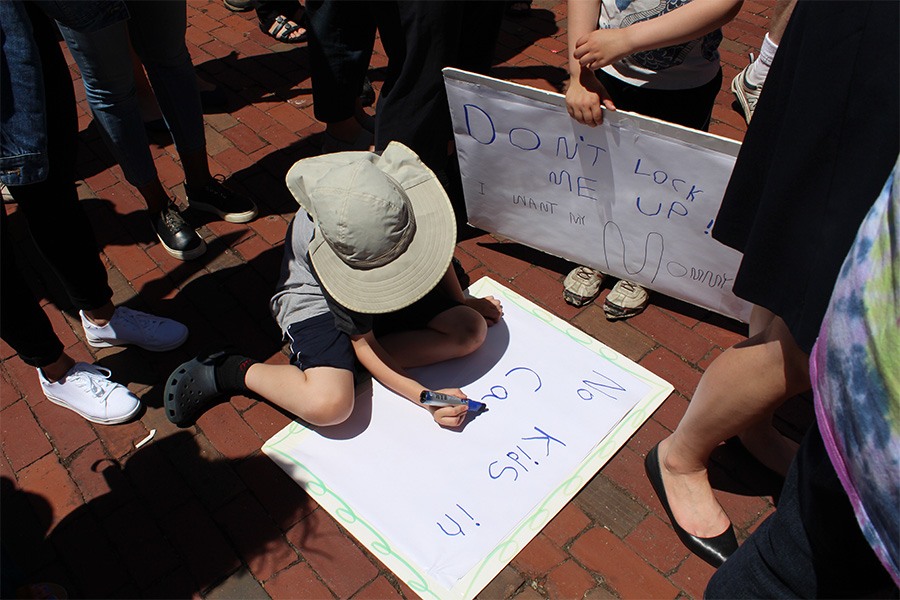 Daniel Parmer, who attended the rally with his mother, mother-in-law, and son, stressed the importance of youth involvement when it comes to an issue like this.

“Democracy is hard. You have to show up, and keep showing up,” he said. “We’re outraged by what’s happening, and we want our voices heard.”