Is Hempfest a Bad Neighbor? Boston City Council Will Weigh the Question
Subscribe
Follow
I'm a scraper
This search result is here to prevent scraping


Is Hempfest a Bad Neighbor? Boston’s City Council Will Weigh the Question

The Freedom Rally might just get kicked off Boston Common for good. 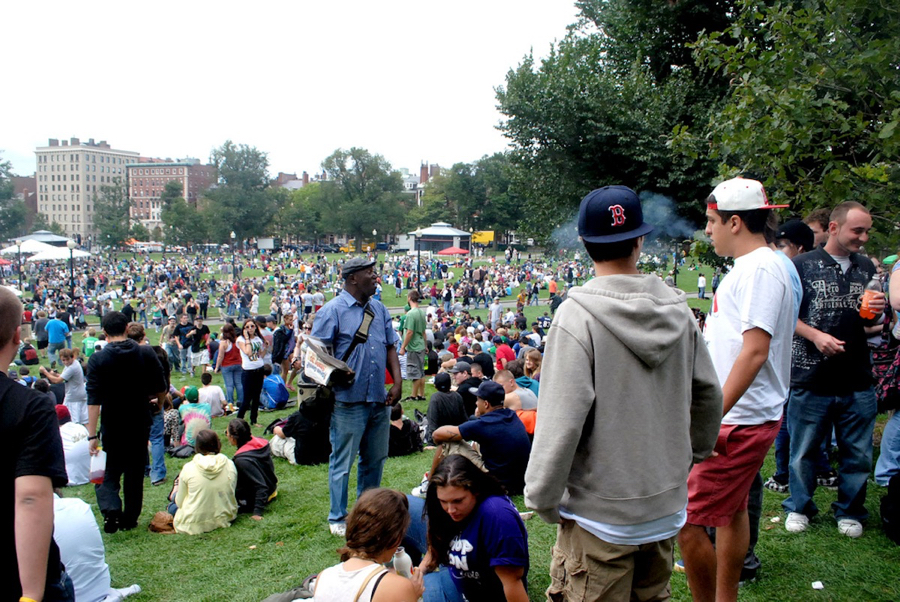 Could this be the end of the Boston Freedom Rally as we know it?

For decades, pro-marijuana activists have held their annual gathering, also known as “Hempfest,” on Boston Common. Loud, rebellious, and celebratory, the rallies have been a centerpiece of the state’s pro-marijuana movement for nearly 30 years, a precursor for recent victories legalizing the drug for medicinal, and later, recreational, purposes.

They have also pissed a lot of people off. MassCann, the rallies’ organizers, have butted heads for years with police, mayors, neighborhood groups, and others over the impact of the 420-friendly festival and its thousands of attendees on the historic park. And now, two Boston City Councilors are floating the possibility of kicking the event off the Common for good.

Councilors Ed Flynn and Josh Zakim on Monday filed a request for a hearing on the event, citing complaints about “illegal activities and permit violations” at this year’s three-day event September 14-16. “This included reports of parked cars on the green space, camping in the park, and leaving trash, including used needles, in the park,” the document, first reported by UniversalHub, says. Among the ideas the council should consider, it says, is forcing the festival to move somewhere else.

The councilors are following the lead of the Friends of the Public Garden, which earlier this year raised serious concerns about the event as the size of its crowds has grown, and this month shared photos of some of the disarray—garbage, food containers, used cooking oil, and, yes, needles—which it described as “beyond anything we have seen in years past” and said required hours of overtime for clean-up.

In an interview, Flynn says he is “not going to speculate” on whether the rally should be barred from taking place on Boston Common, saying his primary concern is reducing damage to the park.”We’re going to get the appropriate officials in to explain what took place this year,” he says. “My focus is to get the results and learn from the results when people do book the Common for the future what type of assistance could be provided.”

Zakim, reached by email, did not elaborate. “We look forward to the hearing,” he says.

While MassCann, a volunteer organization, acknowledges that the event has grown substantially over the years and concedes that the trash left behind this year was unacceptable, the group believes it is being treated unfairly by the city, according to spokesman Maggie Kinsella. “We’re not really new to people wanting us not to have the rally on the Common,” she says. “It’s a cannabis event and that stigma is still real. Any problem that they want to pick out has been amplified by their bias.”

In the wake of this year’s event, organizers are developing a more rigorous plan for trash pickup, better communication policies, and security for next year, she says, and they welcome the opportunity to talk about it in a hearing. She brushed aside reports of needles on the Common, noting that the park often has discarded needles littering its ground and that the city clearly has an opioid problem that has nothing to do with the once-a-year-event.

Indeed, immediately after the festival, MassCann took aim at messy vendors in a Facebook post: “If you left your place a mess last night, you are an animal,” they wrote. “Thank you to those who cared enough about our park to clean up their area and others trash left behind.” Kinsella says several of those vendors will not be invited back to future events.

Kinsella also addressed reports of illegal activity at the event, saying that due to “miscommunication” some vendors were unclear about the state’s new legal pot law (it’s legal to “gift,” but not sell, the drug without a license). But she says vendors stopped breaking the rules when they were told to.

The group is confident it can reach a resolution with the community and stay in the Common, its home since 1991, she says, adding, “We have a right to be there like everybody else.”

Update: reportsCity Councilors on Wednesday agreed to hold a hearing about the Freedom Rally at some point in the future, UniversalHub . A date has not been set.