The gritty old days of 15 Lansdowne and the Roxy are over. Why the City That Definitely Sleeps is fast becoming a high-rollers’ club town. 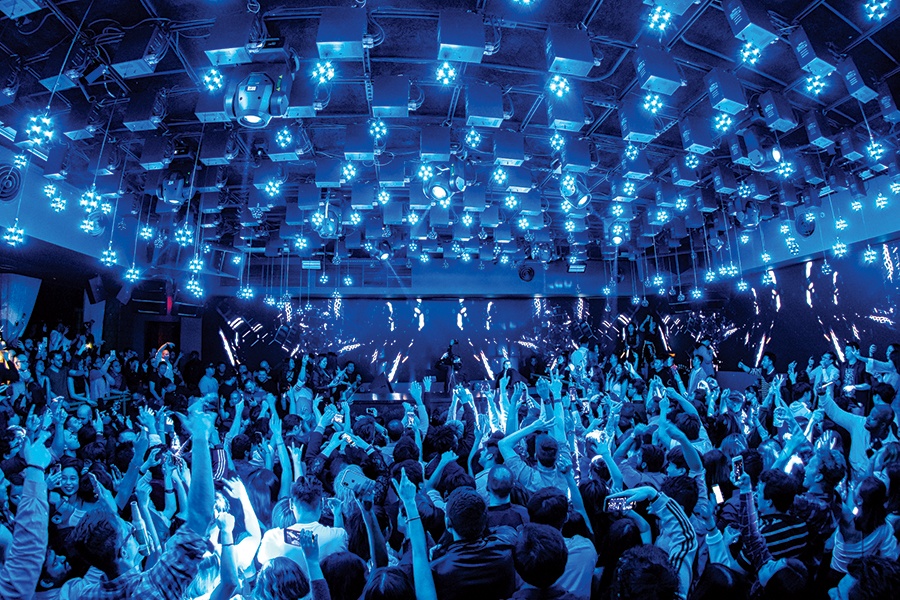 It’s nearing 2 a.m. on a Tuesday morning, and hundreds of bodies are undulating on the fog-covered dance floor. Arty, a Russian EDM heavyweight DJ, is spinning trance music when suddenly the beat drops and hundreds of pulsing lights emerge from a custom-built kinetic ceiling, right on tempo. Partiers seated in the wings knock back Grey Goose and Red Bulls under gilded chandeliers. Every 180 seconds or so, the bottle-service brigade emerges: Playboy Bunny–esque servers in knee-high boots and black-thong leotards hoisting iridescent bottles of Luc Belaire—all arriving on the shoulders of bartenders who are in tiny prop cars or, one time, inexplicably dressed as Star Wars Stormtroopers. This is “I Love Mondays,” a series of DJ nights at the Grand, the over-the-top glittering crown jewel of nightlife in the Seaport District—which, according to owner Ed Kane, represents the gloriously decadent and debauched future here in the City That Definitely Sleeps. For the first time ever, it seems, Boston’s party scene has some real international swagger.

From the moment I walk in, past the state-of-the-art security system and army of security guards, this does not feel like a Boston club. The previous decades were gritty, with overcrowded dance halls and bawdy behavior. “When I first started working in nightclubs in the old days, people used to go out at 7 at night and they would stay all night,” says Frank DePasquale, who once owned and operated the Ocean Club in Quincy and Umbria downtown but ditched clubs for restaurants. There was the rocking psychedelic scene at the Ark, then the wild disco parties of the aptly named 15 Lansdowne, and, later, the punk-centric Rathskeller. By the 1990s, the seediness and notoriously lax safety standards of the club scene provoked the ire of then-Mayor Thomas Menino, who spent his 20-year tenure famously at war with the city’s nightclubs. To many, the idea of clubbing conjures up college memories of unwelcome advances and drinks that couldn’t be trusted. Like much of Old Boston, though, those days seem to be coming to an end.

The Grand’s owner claims to be “reinventing”—not reviving—the city’s club scene. Kane and his company, Big Night Entertainment Group, which also owns Empire, the Scorpion Bar, and nine other locations, have adopted a so-called Las Vegas–style model that thrives on ticketed events for big-name international DJs and traffics in luxury rather than scorpion bowls and grab-assery. The whole vibe is explicitly exclusive. It can cost $200 just to get past the door; a bottle of vodka can run $750; and if you want to kick your heels up in the VIP lounges, you’d better come thirsty and be ready to hit the $3,000 mark. “We’re not cheap,” Kane says. “I want it to be a cut above.”

So why has Boston suddenly gone glitzy? Mayor Marty Walsh ended the war on nightlife, for one thing, and “it’s tech, it’s finance, it’s young professionals,” says Randy Greenstein, Kane’s business partner (along with Kane’s brother Joe). As the second-largest startup-funding hub in the country after Silicon Valley, and the home to companies such as DraftKings and Vertex Pharmaceuticals, it can feel like the new rich are everywhere in Boston. “If you can offer an amazing experience,” Greenstein says, “they’ll spend their money.”

If Kane has anything to say about it, the Vegas-ification of Boston is only getting started. His company is adding exciting new projects, including a music hall in the Hub on Causeway development next to the TD Garden and a smaller nightclub in the new Encore Boston Harbor casino, all in the same vein of opulence. Whether the glitz and glam ushers in a new era of nightlife, with waves of club kids to boot, or leaves us wistful for the bad old days of gritty dives, only time will tell. In the meantime, well, bartenders in tiny prop cars or dressed as Stormtroopers never hurt anyone.