Religious Leaders Confront Jeff Sessions in Boston: “I Call on You to Repent”

A Methodist minister who read a Bible verse, and a Baptist pastor who defended him, were escorted out of a meeting. 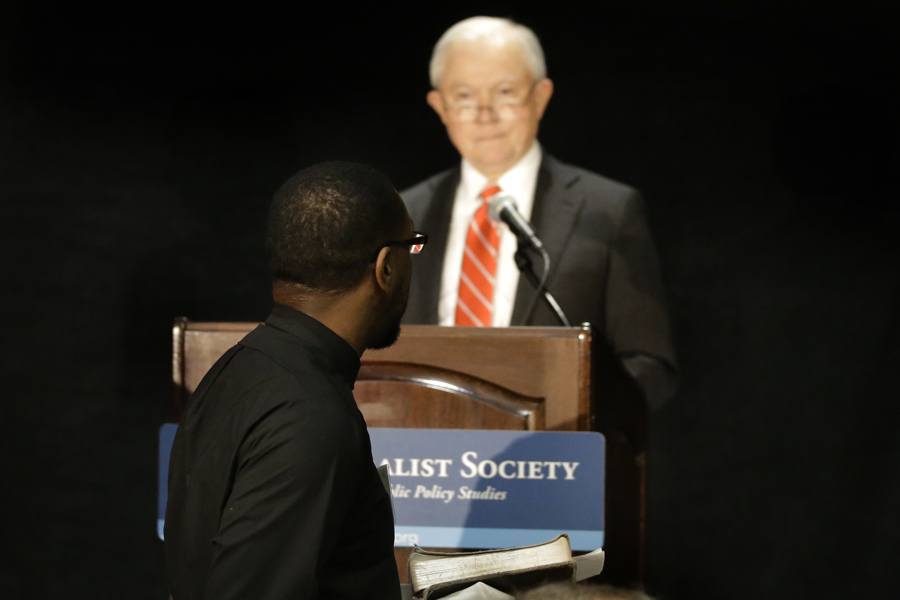 Rev. Darrell Hamilton, front left, a pastor at First Baptist Church, in Boston, is escorted away by Boston police after interrupting remarks by Attorney General Jeff Sessions, behind right, at a luncheon organized by the Boston Lawyers Chapter of the Federalist Society, Monday, Oct. 29, 2018, in Boston. Sessions spoke about religious liberty during his remarks. Photo via AP/Steven Senne

Attorney General Jeff Sessions got an earful at a meeting in Boston today, when two religious leaders confronted him, read a Bible verse, and were promptly removed by police.

“Brother Jeff, as a fellow United Methodist I call upon you to repent, to care for those in need, to remember that when you do not care for others, you are wounding the body of Christ,” a man, identified as Pastor Will Green of the Ballard Vale United Church in Andover, said after reading a Bible verse, which includes the lines “I was hungry and you did not feed me” and “I was a stranger and you did not welcome me.”

Sessions, who was in the middle of a speech to the Boston Lawyers Chapter of the Federalist Society about “The Future of Religious Liberty” at the Omni Parker House, apparently didn’t appreciate being interrupted.

“Well, thank you for those remarks and attack,” Sessions said, “but I would just tell you we do our best every day to fulfill my responsibility to enforce the laws of the United States.”

When another man, identified as Pastor Darrell Hamilton of the First Baptist Church in Boston, stood up to defend him, at least one person booed, and he was also led out out of the room.

He was removed by police.

Another religious leader defended him.

Reached by phone Monday, Green says he was motivated to speak up by the Methodist teaching of “social holiness,” the idea that members of the church need to reach out and hold one another accountable.

“As is true for many people God has put a lot on my heart these days, and I’ve been trying to discern like so many people what I’m supposed to do about it, how to respond to the injustice that is everywhere,” he says, adding that the Bible verse he read is “a call to account, a call to embrace social justice, which is something we’re supposed to take very, very seriously as Christians, so it seemed like a good message to bring to the meeting today.”

Specifically, he says, he is concerned immigration policy in the U.S.—Sessions oversaw the “zero tolerance” crackdown at the border that saw hundreds of families seeking asylum separated—as well as the Trump administration’s attempts to reel in rights for transgender people. Locally, he wants to use his time in the spotlight to advocate for passing Question 3 (the statewide referendum on trans rights), ending ICE cooperation in local prisons, and allowing undocumented immigrants to get drivers’ licenses.

He also wanted to address Sessions’ statement that the Bible verse and commentary from Green amounted to an “attack.”

“I trust that Brother Jeff was being serious when he said he felt attacked,” he says. “The words of Jesus sometimes feel like an attack because when we take the gospel into our hearts it challenges us, it calls on us to change, it makes us re-evaluate how we’re living our lives and treating other people. I trust that the holy spirit is working within Brother Jeff.”

Another protester was reportedly also removed after waving a transgender flag at the meeting and yelling, “We will not be erased.”

Sessions has gotten a less-than-warm reception in Boston before. When he visited last September, the local ACLU organized an “Unwelcoming Party” for him outside the Moakley Courthouse.