For the fourth time in 15 years, the Red Sox have won the World Series. 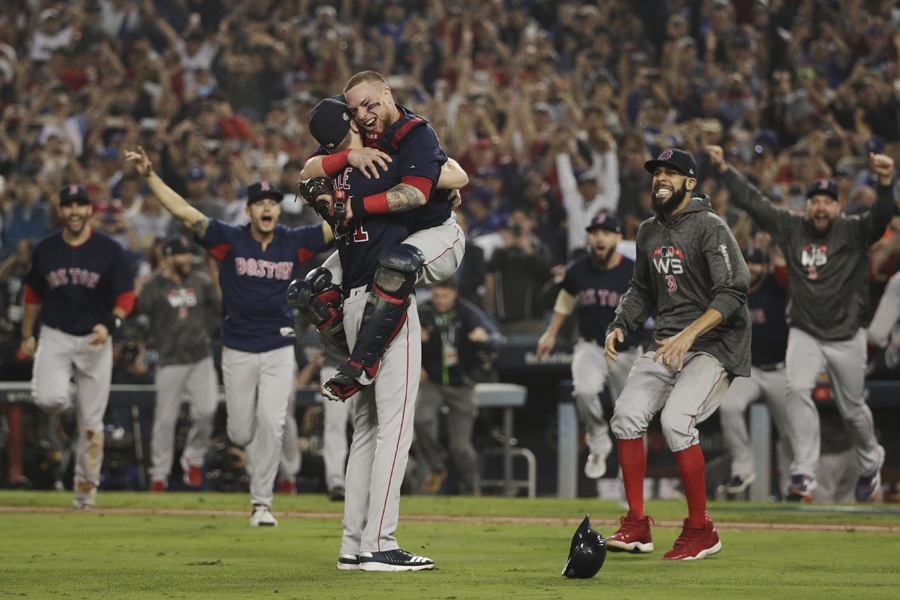 The Boston Red Sox celebrate after Game 5 of baseball’s World Series against the Los Angeles Dodgers on Sunday, Oct. 28, 2018, in Los Angeles. The Red Sox won 5-1 to win the series 4 game to 1. Photo via AP/Jae C. Hong

Curse? What curse? Those 86 years without a championship must have resulted in some kind of good karma, because the Red Sox are now World Series champions for the fourth time in 15 seasons.

After a dominant postseason showing that involved trampling first the Yankees (obligatory “Yankees suck!”), then the Houston Astros, the Red Sox will return to Boston champions once more after knocking out the Dodgers in five games. The final victory came courtesy of a quality start from David Price, who went seven innings and gave up only one run, and some timely hitting from Steve Pearce, who hit two home runs and was named the series MVP. But we know what you’re really here for, right? You want to watch Chris Sale strike out the final batter one more time.

Watch it just a few more times. Because right now, the Red Sox are World Series champions, and that’s something that only happens every…oh, it happens every couple of years, apparently. And just how are people taking it here? Pretty well, it seems.

And if you’re wondering how things are going out on the west coast, the Red Sox are celebrating in style, and blasting “New York, New York.”

The @RedSox have ZERO chill. pic.twitter.com/xvonvEJ7gr