The duck boats are coming! 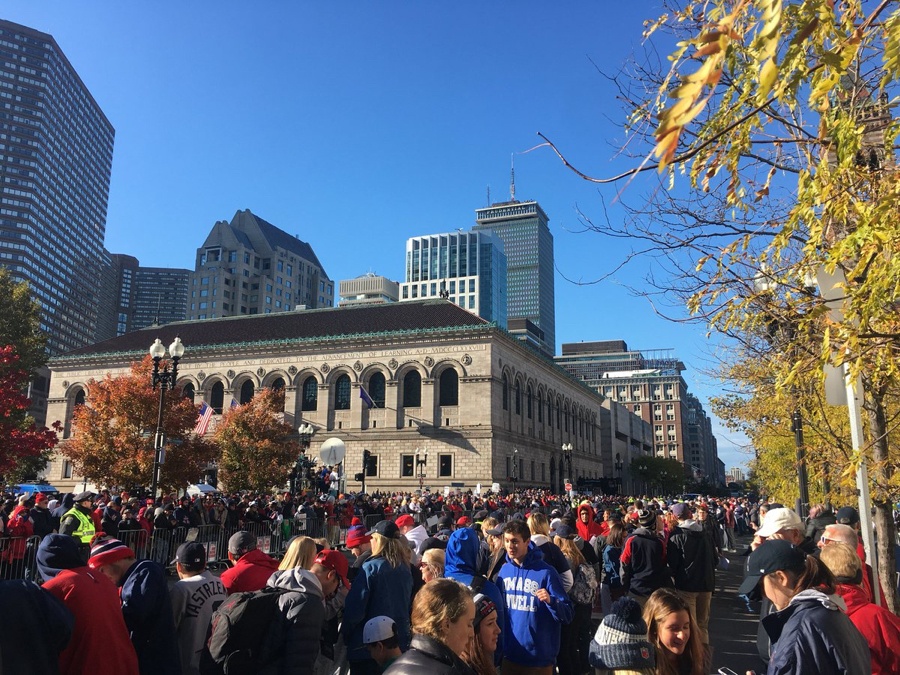 And that’s a wrap for this year’s parade. See you next spring, Sox fans.

Clean up underway on Boylston St. City workers getting everything in tip-top shape for the evening commute #RedSoxParade pic.twitter.com/BPsjbRcQzL

Yikes. Don’t throw a beer can at someone who’s not looking at you. The Boston Globe reports that one bystander might need stitches. And it doesn’t look like Cora appreciated this one too much.

Whoever threw a beer on #MyManager Alex Cora is a POS and ya moms a hoe! #RedSoxParade pic.twitter.com/Mqmp53201R

That is one way to use a vuvuzela, yes. 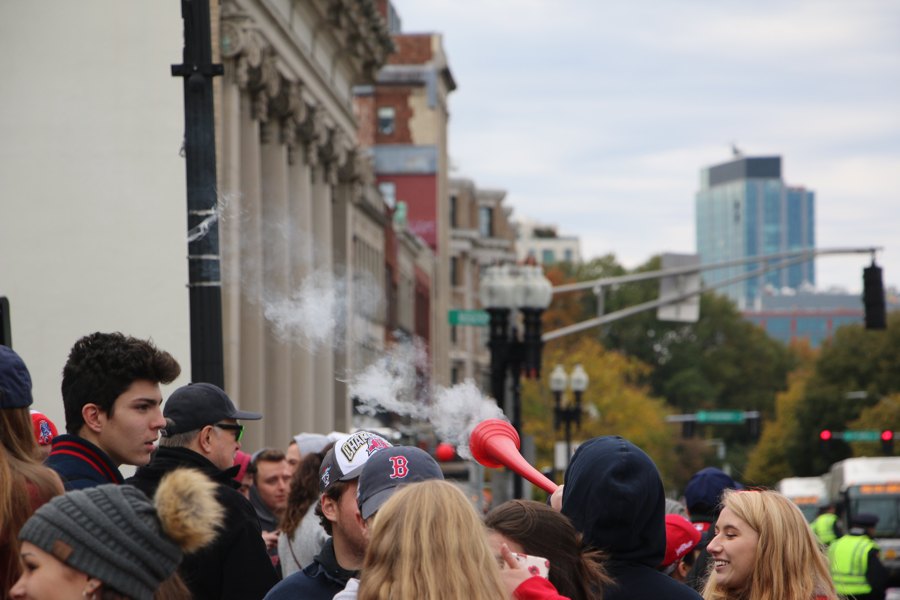 And here is David Price holding a giant picture of his own head. 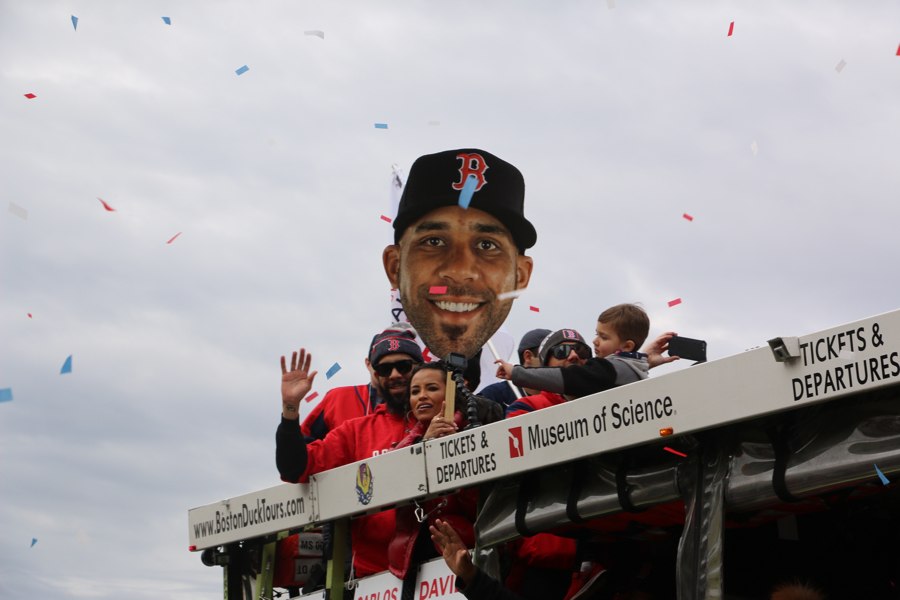 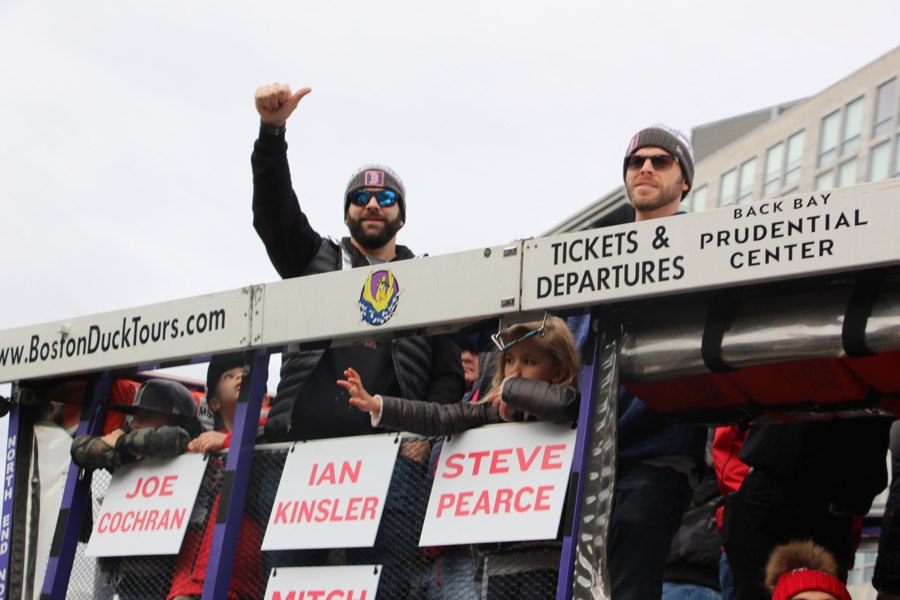 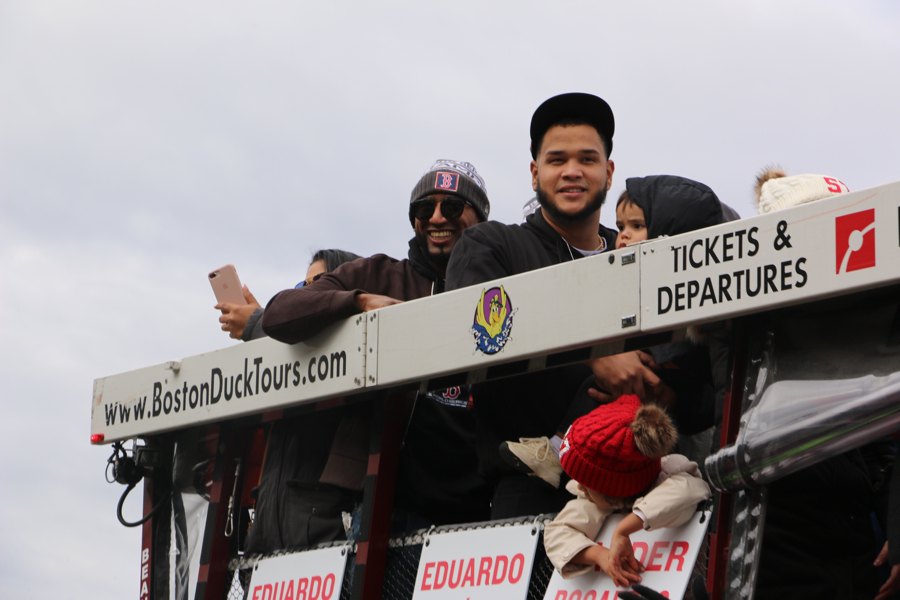 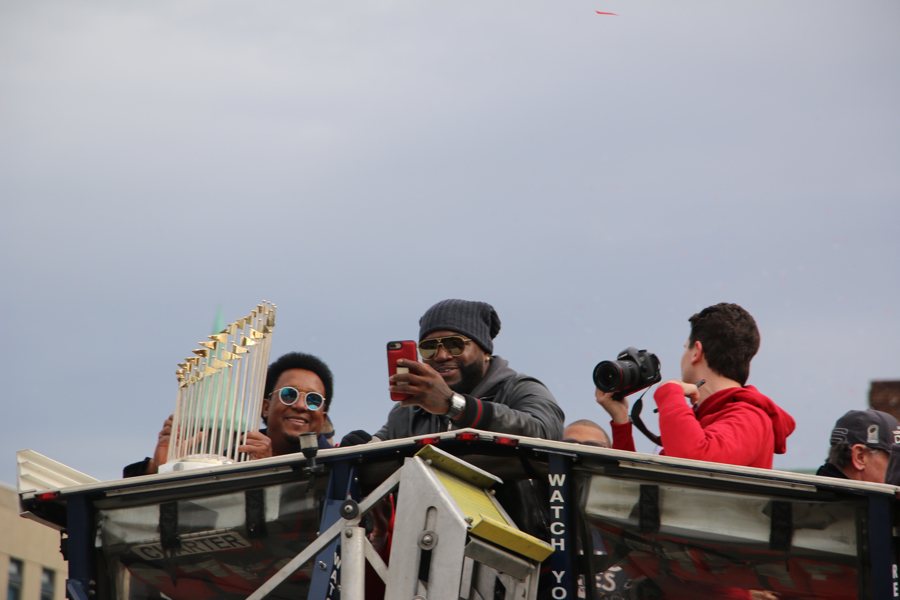 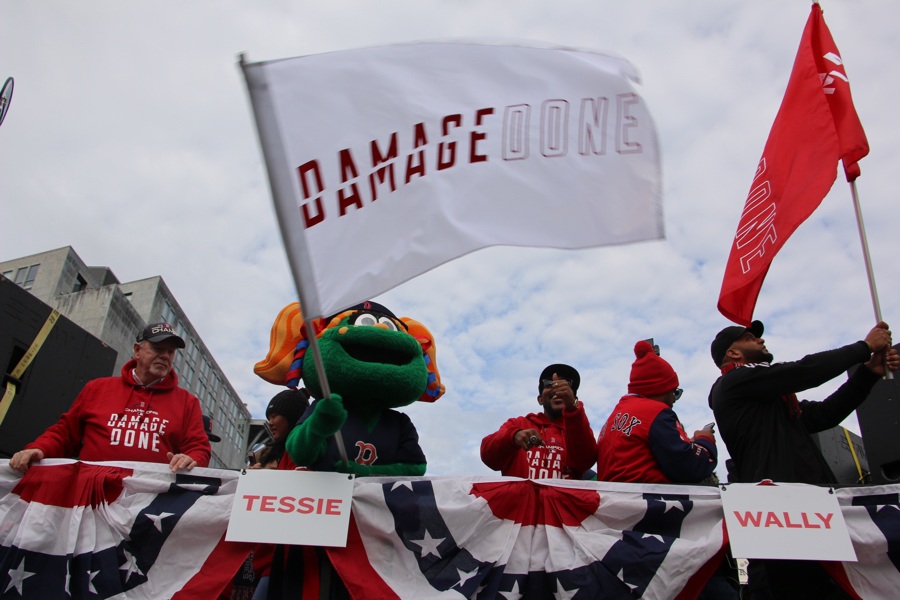 Pitcher Rick Porcello celebrates with a cold beverage as he interacts with fans at the #RedSoxParade. https://t.co/EOeRhHeM0S #7News pic.twitter.com/PnyPb130Yr

WHEN I SAY DO, YOU SAY DAMAGE! #DODAMAGE #DODAMAGE!!! BEAR HUGS TO THE BOYS IN BEANTOWN…ENJOY PARADE DAY FOR THE WINS TO END ALL WINS. WHAT A SEASON!!! #REDSOX pic.twitter.com/2CrQUQleQL

In case you missed it, David Price announced he’s “not going anywhere,” and won’t opt out of his contract.

Off they go! The #RedSox are rolling! pic.twitter.com/L7ECWK5xQU

On a duck boat with the Dropkick Murphys! #WCVB #RedSoxParade pic.twitter.com/Ty6ge5IiwY

We’re on the duck with our biggest star, Griff Holt! 🖐 pic.twitter.com/Z99ImhcJGi

The striking hotel workers from Unite Here Local 26 are out here. “Congrats Red Sox!” reads one sign. “Support the strike!”

It’s a Red Sox victory parade on Halloween and you know what that means. It means Fenway Jesus and the Sox Lobster are on the prowl. Here are the best costumes we’ve seen so far. 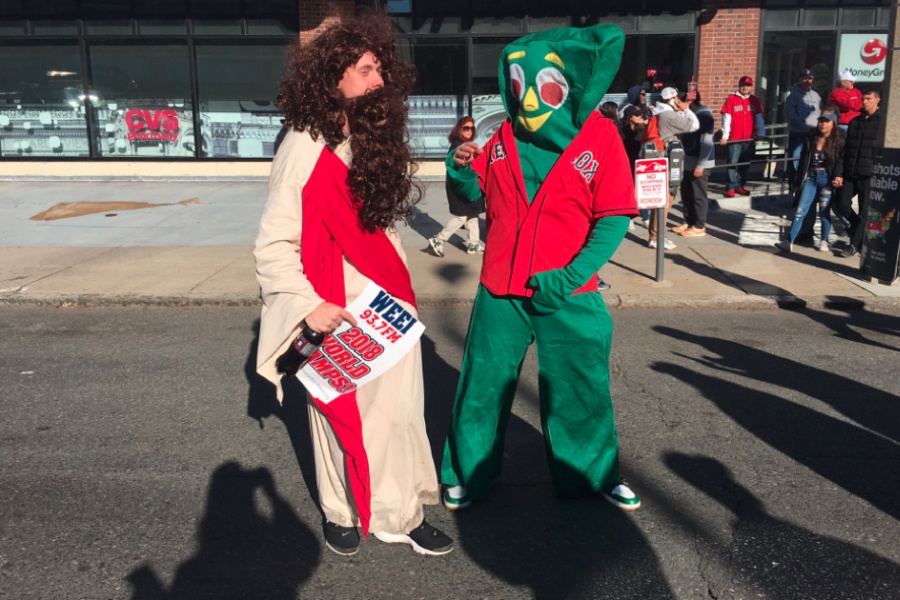 Get a load of this guy’s hat! A New Yorker, no less.

Steve Madden and his fam from New York (!!) are lifelong Sox fans originally from Western Mass. Steve first came to Fenway in 1965. He broke out his special occasion hat today. The buttons are all original pic.twitter.com/PfmXtJE5Y7

The first David S. Pumpkins of the morning has been spotted. Here’s Dave Muntz with his family from Shrewsbury. 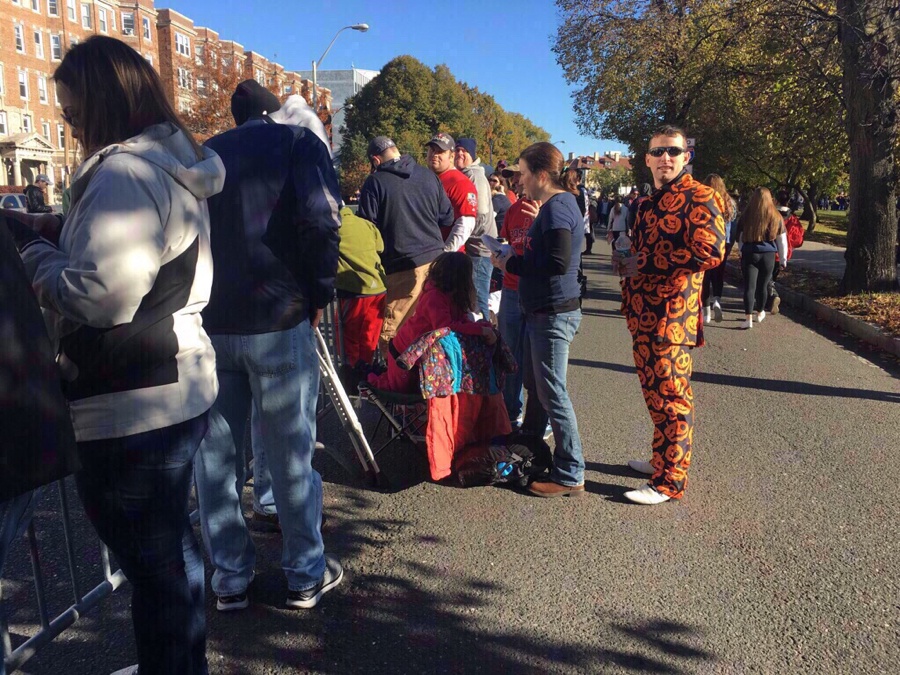 You can always count on New England sports fans to come through with the signage, and there is plenty of that along the parade route today.

I haven’t seen many homemade signs yet but Lisa Zanca of Holden probably wins pic.twitter.com/ZVXgQOyMet

Oh heck yes Lisa! This is the other side pic.twitter.com/iPi5GBWLCu

Gov. Charlie Baker, in a “Damage Done” hoodie, told fans and staff at Fenway Park that they’re living in the “golden age” for the Sox, and relived the glory of Game 5:

“When I saw Machado come up, when I saw the look on Chris Sale’s face, my reaction was, ‘I cannot think of a better guy to go down for out number three!’ It was awesome!!!”

.@MassGovernor on Manny Machado going down on strikes to end Game 5 of #WorldSeries: ‘That was sweet! Sweet!” More: https://t.co/EOeRhHwmSq #7News pic.twitter.com/wMMM0DFxCJ

Good morning, Boston. And what a beautiful morning it is. Bright blue skies and temperatures in the upper 40s await revelers at the Red Sox victory parade today. The duck boats are lined up and ready to go, and will be setting off on their journey downtown at 11 a.m.

For those of you who still haven’t made it to the barricades, heed our advice on the best spots to watch it all go down, and grab a bite to eat while you’re at it.

And if you’re looking for some music to get you in the mood, be sure to crank up the volume for the unofficial song of the World Series: the must-listen “Red Sox Nonstop Remix” by a local DJ, which has been embraced by the players themselves.

Right now, season ticket holders, staff, and their families are gathered at Fenway Park waiting to see the players off. The team will then steer onto Boylston Street and make their way to Government Center.

Fans inside Fenway, with the Red Sox and families assembling in the “cage” beneath the stands, ready for another great duckboat parade! pic.twitter.com/jpR3OhHuWO

Plenty of Red Sox fans are already there. Some of them have been there since last night, which is amazing.

12 hours before the parade begins #RedSox fans are already securing their spots for the #WorldSeries champs parade! @boston25 pic.twitter.com/6mYRMzEdvb

Two hours from the #RedSox parade, and people are already lined up at Government Center. Our live coverage begins at 10 on #WBZ! pic.twitter.com/nFm24cdrvE

Now that is commitment. I guess that’s what being the City of Champions is all about.

Stick with us for more updates as the day rolls along.

In the meantime, let’s goooooooo!