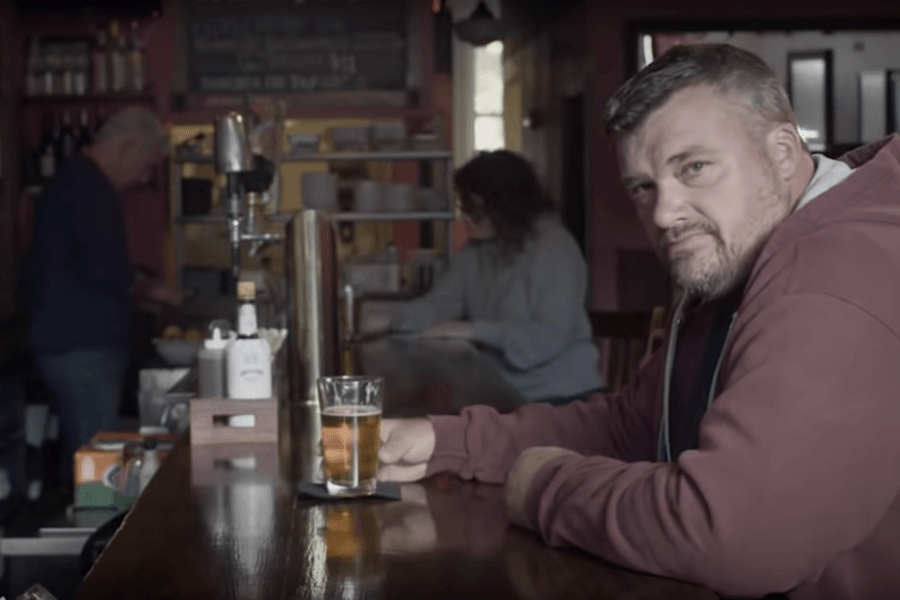 A new ad in support of Question 3 stars a foul-mouthed “Masshole” with a lot to say about protecting transgender rights. And not everyone is pleased.

At the start of the video, which popped up on YouTube Thursday, a surly Bostonian in a red hoodie seated at a bar takes a gulp of beer, slams his pint down, and begins a speech about the city’s ethos of freedom.

“Think about it kid, we bang a uey wherever we want. No blinkah,” the actor says, in a premium Boston accent. “We cut you off on the Pike and then we slow it right the fuck down. And then the second that light turns green, I’m honkin’.”

“Spoken like a true Masshole,” replies a bartender puttering in the background.

The bar patron keeps going, name-checking the city’s love for space-savers and jaywalking. (“I’m a fuckin’ pedestrian. This is where I’m crossin’.”)

And then he gets to the point.

“Our forefathers granted us this right to be loud, proud, occasionally obnoxious, and that freedom is so important to us,” he says. “So who are we to take away our neighbors’ liberties, or revoke the law that protects their right to live a life free from discrimination, or be biased against someone based on the gender they identify with?”

“Yeah, we’re Massholes,” he says to the camera, “but we’re not assholes.”

The ad then tells viewers to vote “yes” on Question 3 and directs them to a website, MassholesNotAssholes.org, where there are pictures of some catchphrases available to download. For example: “We don’t care what toilet you use. Just wash your f*ckin’ hands, kid.”

The clip, produced by ad agency MullenLowe and filmed at the Porter Café in West Roxbury, had more than 35,000 views by Friday afternoon. Although it has the look and feel of a political ad, no one paid for the video. The agency says members of its staff decided to make it on their own, pro bono. They do not plan to run it on TV.

As it made the rounds online, some apparently thought the video was great, dubbing the 2-minute spot a “masterpiece.”

Question 3 is a ballot question up here in the Commonwealth that will keep our LGBTQ fellow citizens covered under the state’s anti-discrimination laws. It probably will pass easily but it already has given us this masterpiece. https://t.co/2XIiluUa1s

But Freedom Massachusetts, the group that fought for the state’s transgender protections law and is now leading the Yes on 3 campaign, is distancing itself from the ad.

“This video was not produced or coordinated with our campaign,” says spokesman Matt Wilde, in a statement. “While it’s intended to be a fun take on the ballot question, we recognize that this is a serious issue and the Yes on 3 campaign rejects name calling.”

Officially sanctioned ads from the Yes on 3 campaign feature interviews with sexual assault experts, a former police chief, and the family of a transgender young man. The videos shy away from criticizing their opponents directly.

On the other side, the group behind the effort to repeal the state’s transgender rights law has stooped to airing ads that prey on people’s fears, distort the issue at hand, and liken the trans community to sexual predators. They’re going low, and Freedom Massachusetts evidently wants to go high.

“Our campaign is about dignity and respect for all people, including voters who are right now deciding how to vote on Question 3,” Wilder says. “We have the endorsements of more than 1,500 coalition partners, including parents, the Massachusetts Chiefs of Police Association and other law enforcement leaders as well as more than 50 of the state’s leading sexual assault prevention agencies. These are the voices that represent the Yes on 3 campaign.”

The ad agency, meanwhile, is defending its video. “I know some people question the use of our words,” says Kelly Fredrickson, president of MullenLowe Boston. “But I’m from here and I’m a proud Masshole. I’ve been raised in a state that protects all our liberties and I want those to exist for my kids.”

This came about as one of our LGBTQ employees came forward asking how we could help support Yes votes for question 3. We did it in the way we do best – create content that inspires people to act. People need to vote to make this happen. We wanted to make sure we were supporting the efforts of the [Yes on 3] coalition because we know how important this is to our Commonwealth. Our diverse team included members of the LGBTQ community and allies in the production community. They helped us produce this in record time.

I know some people question the use of our words. But I’m from here and I’m a proud Masshole. I’ve been raised in a state that protects all our liberties and I want those to exist for my kids.