The Boston Marathon Bombing Memorial Won’t Be Ready Until Summer

Artist Pablo Eduardo is still hard at work on the sculpture. 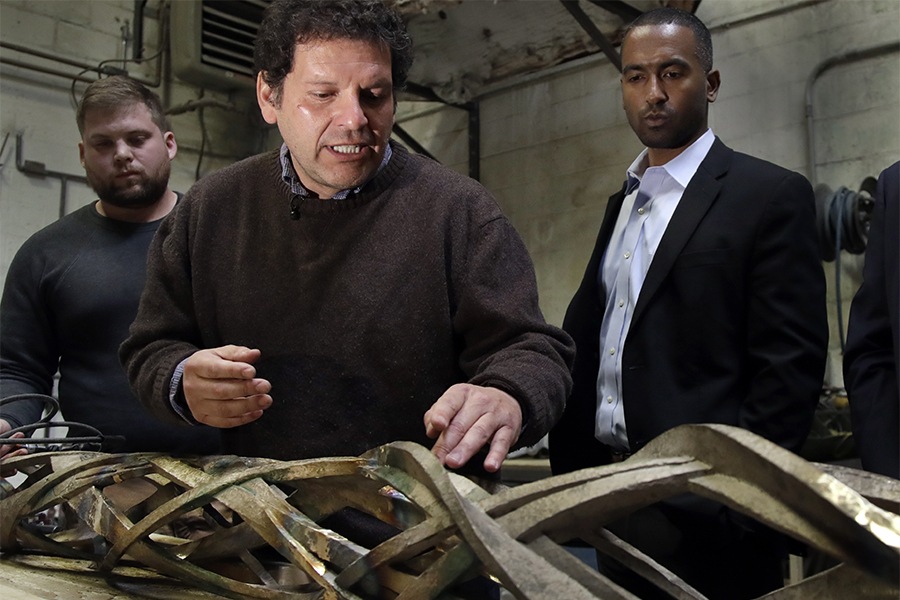 Artist Pablo Eduardo, center, speaks about a bronze tower which will be part of a permanent memorial to the victims of the 2013 Boston Marathon bombings at a foundry in Chelsea, Mass. Listening at left is foundry owner Dan Kendall and at right is Boston’s Chief Diversity Officer Donny Tavares. Photo via AP/Elise Amendol

A long-awaited memorial to the victims of the 2013 Boston Marathon bombing is going to be awaited a little bit longer.

The $2 million project is meant to memorialize the three lives lost and to honor the more than 260 people injured by the bombing. It was originally scheduled for completion by last year’s race, the five-year anniversary of the attack.

And with the 2019 marathon coming to Boston in less than three weeks, it’s going to miss that mark as well, says Pablo Eduardo, the artist, who estimates at least eight more weeks of work.

However, the finished permanent installation should be ready for its spot on Boylston Street by this summer, according to city officials. The delays come partly from substantial changes to the memorial’s design since its inception four years ago.

The newest design is centered around three monoliths of granite, each representing one of the lives lost. Families of the three victims were given the opportunity to choose the stone, sourcing the material from Franklin Park, Spectacle Island, and Boston University to honor each one’s home. The pillars will be installed on the sites of the detonated bombs.

For the first time, we’re seeing the delicate work being done on the Marathon Memorial Markers. We’ll share story at 4,5 & 6. @boston25 ⁦@jenyp⁩ pic.twitter.com/vWVL27zB1n

“This is going to be there forever. There’s too much emotional investment to do it any other way,” Eduardo told the Boston Globe.

The design has gotten more and more abstract over the years thanks to requests from the families of the deceased. What will eventually adorn an expanded stretch of sidewalk near the end of the marathon route will be made of granite pillars, bronze, and lighted glass surrounded by newly planted cherry trees. Inscriptions chosen by family and friends will circle the pillars in bronze.

And the families seem grateful for the extra time and work being put in. Helen Zhao, whose niece Lingzi Lu was one of the bombing victims, told WBUR, “It’s a very personal, sensitive project. The artist and the city have been very patient. You can tell how much they want to get this right, and we really appreciate that.”