A lost bird at Assembly brought the MBTA line to a halt today. 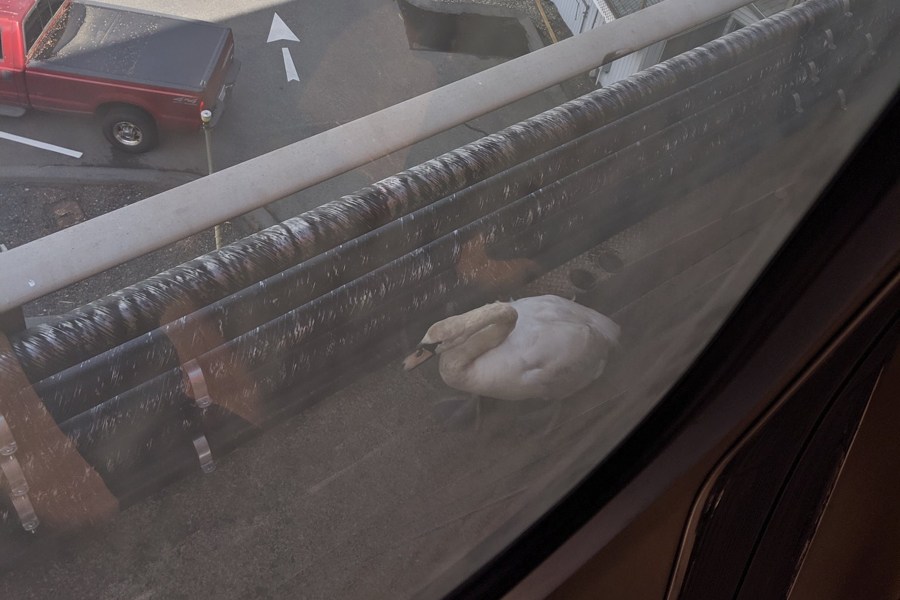 I’ve learned to just roll with the punches on the Orange Line. Delays come, delays go. Some days are much better than others. So when my train was stuck for several minutes this morning and an announcement about what particular malady was slowing us up this time, I couldn’t hear it through the music blaring in my headphones.

It wasn’t until later that I learned there wasn’t just some signal snafu or mysterious track issue to blame when the subway ground to a halt a little after 9 a.m. It was a damn swan.

This guy holding up the Orange line this morning #MBTA #orangeline pic.twitter.com/S3y8r3CR1j

Commuter Benjamin Finkelstein snapped a photo of the culprit and posted it to Twitter. And a more attentive passenger than myself heard the unusual explanation come through the train’s speakers: “Attention passengers, this train will be standing by due to a distraught swan in the right of way near Wellington Station.”

That’s a new one, Orange Line motorwoman on train at Back Bay: “attention passengers, this train will be standing by due to a distraught swan in the right of way near Wellington Station” @universalhub #mbta #orangeline

MBTA spokesman Joe Pesaturo tells me there was, in fact a swan-caused delay on the Orange Line. The stoppage ended promptly when a T employee shooed the majestic and apparently very lost fowl away. “Some trains were held for a few minutes after the swan was spotted on the southbound track at Assembly Station,” he says in an email. “As an MBTA subway official approached the swan, it took flight.”

This is not, Pesaturo also points out, the first time a swan has disrupted train traffic: Back in 2017, an apparently fearless swan nonchalantly waddled its way along the tracks at a British train station for two entire miles.

So another happy ending involving a run-in with Boston’s bird population, in a city that this week also saw the heroic and adorable rescue of a baby duck from a sewer grate thanks to the Boston Police Department.

#BPDTrafficAdvisory: Tremont Street inbound from Prentiss Street to Ruggles Street in front of BPD HQ will be down to one lane temporarily. BPD Officers are standing by awaiting Water and Sewer for a mother duck who’s duckling fell into the sewer! pic.twitter.com/ewyUjcWrtx

Guess it just goes to show you what can happen sometimes when we share space with wildlife. And consider this a reminder to never ignore the announcements on the T.