They're asking executives to stop selling bedding to a migrant detention center. 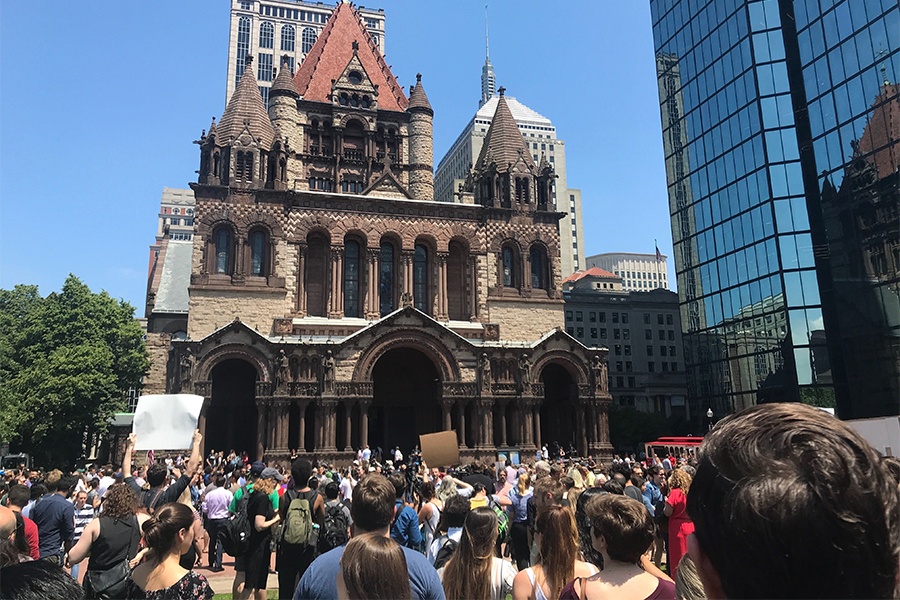 This story will be updated over the course of the day.

Employees at Boston-based furniture retailer Wayfair staged a walkout in protest of their company’s contract selling bedding to an immigrant detention center at the U.S.-Mexico border.

At 1:30 p.m., hundreds of Wayfair employees left their office and flooded Copley Plaza to applause from supporters from across the city. 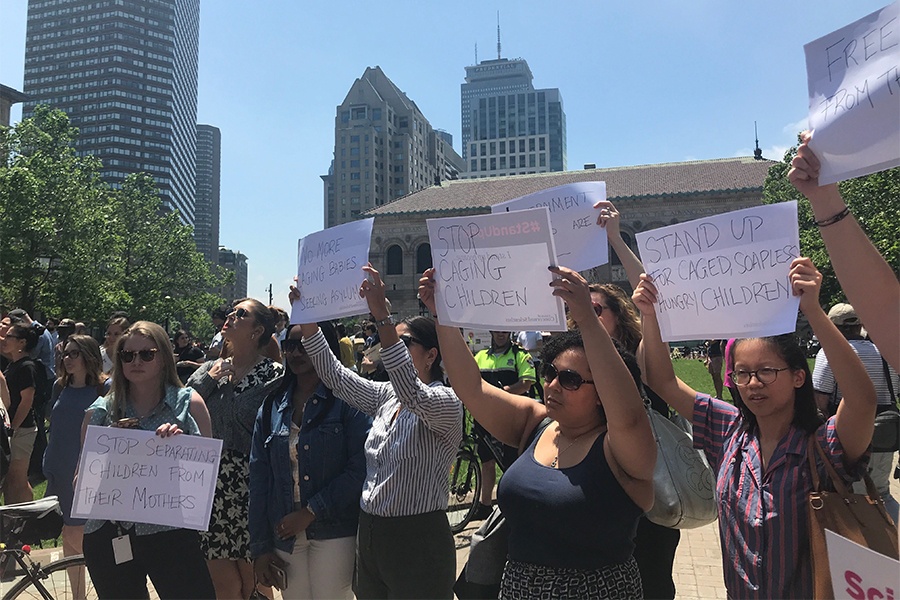 Over 500 employees signed a letter of protest sent to company executives last week. When the leadership team declined protesters’ request to end the contract, employees organized today’s event. The walkout was amplified by a new Twitter account, @wayfairwalkout, run by company employees. It caught the attention of several politicians, including Congresswomen Ayanna Pressley and Alexandria Ocasio-Cortez, as well as Massachusetts Senator and candidate for president Elizabeth Warren.

Our goals and asks for today’s walkout at 1:30 are as follows:

1. Commitment to the Requests as laid out in our original letter.
2. The additional request that all profits from completed sales be donated to RAICES.

The company responded earlier by indicating it would donate $100,000 to the Red Cross, but the employees behind the Twitter account pointed out that the Red Cross is not involved with the facilities.

.@Wayfair stated in an email today that they will be making a donation of $100k to the @RedCross. This is great news! And proof that Wayfair can & does do good.

However, the Red Cross has nothing to do with these ICE-operated facilities.https://t.co/UehtJibmWF

Myla Silberg (6) and Pike Goines (3) are scooting over to Copley Square for the #wayfairwalkout. Myla remembers the April Stop and Shop walkout and was excited to participate in this one. pic.twitter.com/5WvhLhGgWw

Here’s Eli Albert, not a Wayfair employee, just here to support them. The walkout is “the right thing,” he says. “We cannot allow people to suffer in concentration camps that are for profit. It’s inhumane.” pic.twitter.com/vP6rwbetcH 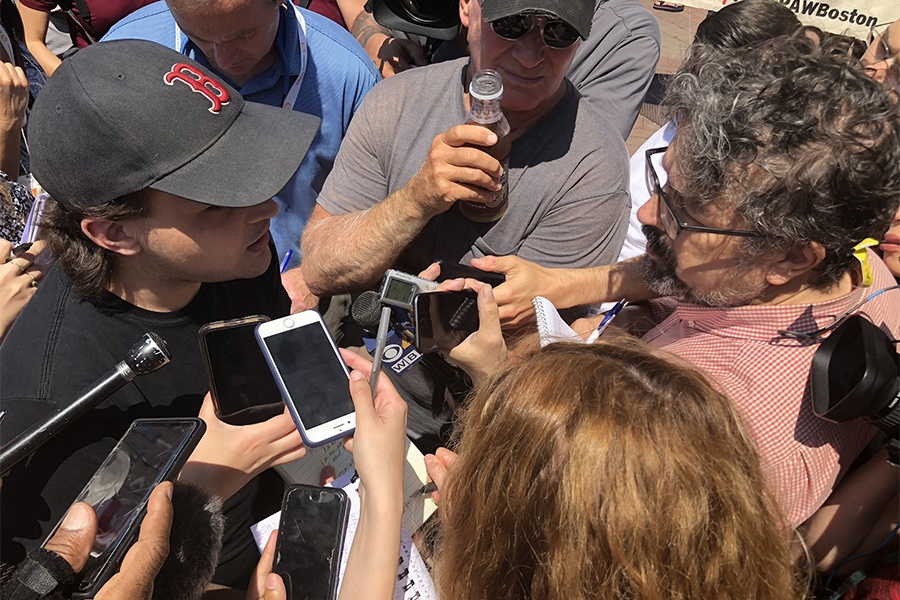 The walkout drew a massive amount of national media attention, with journalists swarming protesting Wayfair employees like engineer Tom Brown, who says, “the outcry of support from everyone, from people to politicians to organizations has been overwhelming.” He says he and his coworkers have been working together since word about the border camp deal circulated through an office Slack channel last week. “We hire the best people,” says Brown, a 33-year-old engineer at the company. “We’re looking for the best and the brightest, and those just so happen to be the people that care the most. These are the people that we know will fight for what’s right even if it’s a difficult conversation right now.”

Wayfair employees acknowledged their bosses’ $100,000 donation to the Red Cross, but called on executives to meet their initial demand to fund RAICES Texas, a nonprofit that specifically pushes back on the U.S. migrant detention policy. “I think it’s a good start,” says Kayla Smith, who says she’s been at the company for a year, “but we can do more.”

Non-employees also turned out to greet the workers when they arrived at Copley. “We cannot allow people to suffer in concentration camps that are for profit. It’s inhumane” says Eli Albert, who showed up carrying a cardboard sign reading, “End Business with Concentration Camps.” Some protesters even brought their children with them to participate. “My mom told me about concentration camps,” says Ezra Beck, 7. “Kids shouldn’t be held in them.”

Also among the crowd were several labor groups, who came with messages of solidarity for the Wayfair workers, who are not unionized. “Your struggle is our struggle,” the Boston Independent Drivers Guild’s Felipe Martinez, who organized last month’s Uber strike, said to the crowd. “We are with you. Just remember that.” 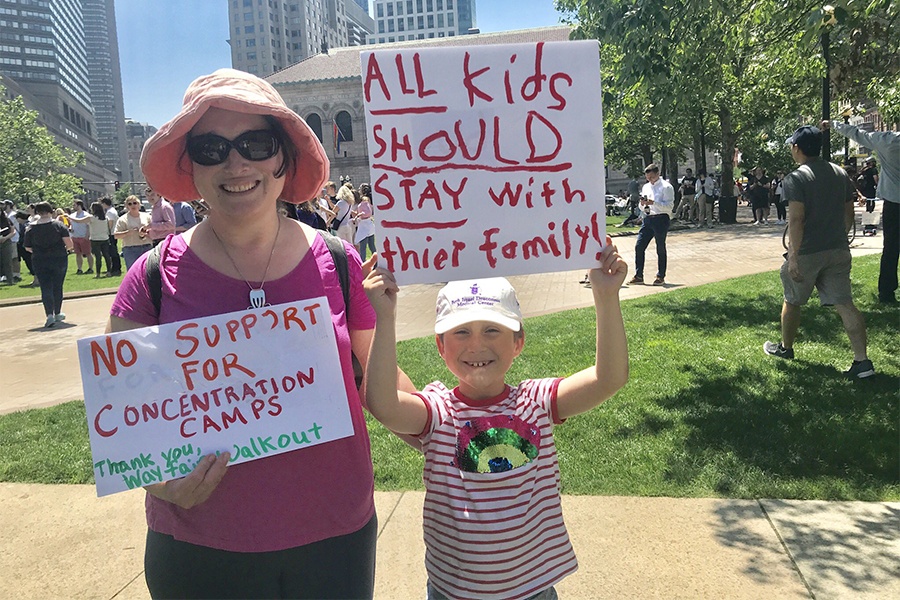 Some of the signs you can find at the #WayfairWalkout:

“A prison with a bed is still a prison”