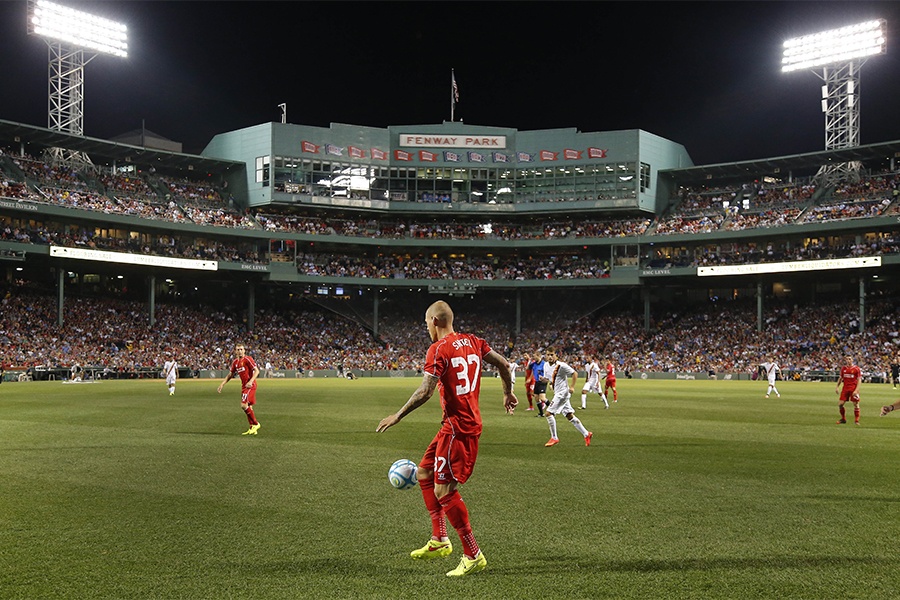 Red Sox fans are used to seeing a championship-caliber team owned by John Henry dominate opponents at Fenway Park. But this weekend, while the Sox are off in Baltimore playing the Orioles, Fenway Sports Group is bringing its other team that won a championship in the last calendar year to town. That’s right: For the first time in five years, soccer fanatics and those who love them have the rare opportunity to see Liverpool FC in person at Fenway Park. As part of their annual pre-season tour, the team will be playing a friendly match against Sevilla FC right here on Jersey Street on Sunday, July 21.

Back on June 1, hours before most of us tuned into the Red Sox’s 5-3 loss to the Yankees in the Bronx, John Henry, Linda Pizzuti Henry, Tom Werner, and company were across the Atlantic in Madrid, Spain, watching their other team win in massive fashion. Yes, for those still not attuned to soccer, Fenway Sports Group won their second title of the 2018-2019 season when Liverpool FC beat Tottenham Hotspur, 2-0, in the Champions League final game, thus earning the world’s top laurels in professional-club soccer.

While such an unprecedented dual accomplishment with Liverpool and the Red Sox has gone largely unnoticed here in the soccer-ambivalent States, it has certainly been noticed overseas. After all, the worldwide audience for the Champions League final utterly dwarfs our Super Bowl, which in turn eclipses the World Series. And it has not gone unnoticed by fans that FSG turned a $400 million investment in a legendary but debt-ridden soccer team into a profit-making juggernaut worth $2.2. billion. Just this week, the blog FiveThirtyEight named Liverpool the third-best team on the planet. If there’s any a time for a Bostonian to jump on the bandwagon and join a world of fellow fans, this is it.

And the owners are glad to oblige. “We are excited that Liverpool is returning to Boston just weeks after the Club’s triumphant Champions League victory in Madrid,” says FSG co-owner and Liverpool chairman Tom Werner. “It’s a terrific opportunity for our U.S. supporters to see coach Jürgen Klopp and our team, and I know the squad loves playing at Fenway Park because of its iconic history.”

This will be the third time Liverpool has visited Fenway since FSG bought the team in 2010. The previous two bouts in 2012 and 2014 were against AS Roma, owned by fellow Bostonian Jim Pallotta. This time, the Reds (as they are known by fans for their crimson unis) will face a top Spanish squad in Sevilla FC.

For LFC Boston, the active supporters’ club that convenes here to support the team, any visit is especially welcome now. “It feels a lot different from the other times they’ve been here,” says LFC Boston chairperson Ian Gunniss. “As the years have gone on with FSG owning Liverpool, it really does feel like a hometown team for Boston. I get a lot of people who might never have been interested in football, or soccer, talk to me about how to get involved because they’ve now been exposed to a sport they might not have really felt connected to.”

So if you’re a curious or casual fan, how do you get connected this time? The Fenway team has quite a few options for your weekend:

If you purchase a VIP ticket for Sunday’s match, you get a full weekend of experiences, including a closed training session with the team at Fenway Park on Saturday, July 20, as well as a pre-match Fenway tour on July 21, followed by a lunch reception with Liverpool legends of yore.

On Saturday night, anyone with a ticket is welcome to an all-ages fan event at the House of Blues, from 7 p.m. until closing, where LFC icons like Ian Rush and Vladimir Šmicer will be on hand, as well as members of the LFC podcast The Anfield Wrap, and singer Jamie Webster, who turned the chant “Allez, Allez, Allez” into a worldwide viral soccer meme by performing it around the U.K. and Europe and at the final in Madrid.

But then, of course, is the match. Tickets are still available for the 6 p.m. start, and even before that, from 12 noon to 4 p.m., the team will host a “Match Day Fan Fest” on the Big Concourse at Fenway for fans with tickets, featuring live music and entertainment. And because half of fandom involves wearing your team on your back, this weekend the Red Sox Team Store will be stocking all kinds of Liverpool and Sevilla merch to please any hardcore supporter or newbie.

And at any point before the match, during the match, or long after, LFC Boston’s Gunniss reminds you that no matter whether you’re a new fan or old, you’re always welcome at the Phoenix Landing in Cambridge, where the supporters’ club tries to make Liverpool feel like the hometown team every weekend. On gameday, they’ll also be convening right near the ballpark at the Yard House and Fenway Johnnie’s before the match. “You feel the pain of loss, the jubilation of victory, and a camaraderie that I’ve never felt with any other sport,” says Gunniss. “That’s without even being on the squad ourselves!”