A Hot Mic Confirms It: Sanders and Warren Are Still Fighting

Well, there you have it. 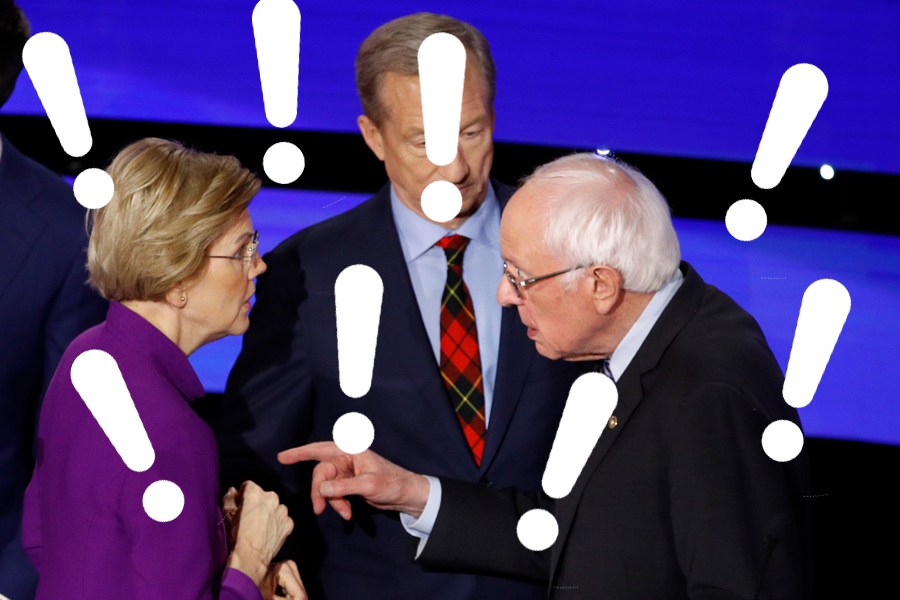 Look, folks. Elizabeth Warren and Bernie Sanders may have once been friends and allies, but at least for the next few months, they’re acting like rivals.

If that wasn’t already clear for you by the time the moderators of Tuesday night’s debate brought things to a close, the newly released hot mic audio of the candidates’ post-debate spat confirms it. The footage of the interaction, in which Warren rebuffs Sanders’ handshake and then begins a short but obviously terse conversation as cameras roll, has attracted tons of attention and prompted speculation—including from us—about what implications it might have for the tenuous Warren/Sanders alliance. What exactly was said, no one could or would say for sure.

But late Wednesday night, CNN finally released a recording of the conversation, putting the mystery to rest (and keeping this CNN-centric news cycle going for another day [funny how that works!]). As it turns out, Warren made a bee-line to Sanders to accuse him of calling her “a liar on national TV.”

Elizabeth Warren: “I think you called me a liar on national TV.”

Bernie Sanders: “You know, let’s not do it right now.” pic.twitter.com/Ad0VN53Xux

Here’s the dialogue, as revealed by the tape:

“I think you called me a liar on national TV,” Warren can be heard saying.

“I think you called me a liar on national TV,” she repeated.

“You called me a liar,” Sanders continued. “You told me — all right, let’s not do it now.”

Here, of course, Warren is confronting Sanders about the moment in the debate in which both were asked about Warren’s explosive allegation that Sanders told her in a private 2018 meeting that he didn’t think a woman could win the presidency. Sanders flatly denied that version of events at the debate: “I didn’t say it,” he said, calling it “incomprehensible” that he’d say such a thing given his track record. The implication was that Warren was making the whole thing up, or had an interpretation of what was said that was significantly different from his.

Regardless, looks like it’s time to put this idea that Warren and Sanders can be both rivals and buds at the same time—at least in the short term—out of its misery.

For their part, a collection of influential progressive groups on Thursday co-signed a letter urging the two of them and their respective affiliates to make up and move beyond this whole thing:

Sanders and Warren, as well as their campaigns and supporters, will need to find ways to cooperate. The crossfire amplified by the media is unhelpful and does not reflect the relationship between two Senate colleagues who broadly worked well together for most of the last year. We hope to build solidarity between delegates affiliated with these two candidates prior to the convention and will encourage the campaigns to work towards a unified convention strategy after the final primaries on June 2nd.

While we firmly believe that either Warren or Sanders should lead our nation in 2021, we will, in the end, go all-out to defeat Trump no matter who the Democratic nominee is. We urge all American progressives to adopt this view. We owe no less to ourselves, our nation and our world.