Will Grocery Stores Start Running Out of Food?

Supplies such as toilet paper have already vanished from shelves. Fingers crossed, it doesn’t get any worse than that. 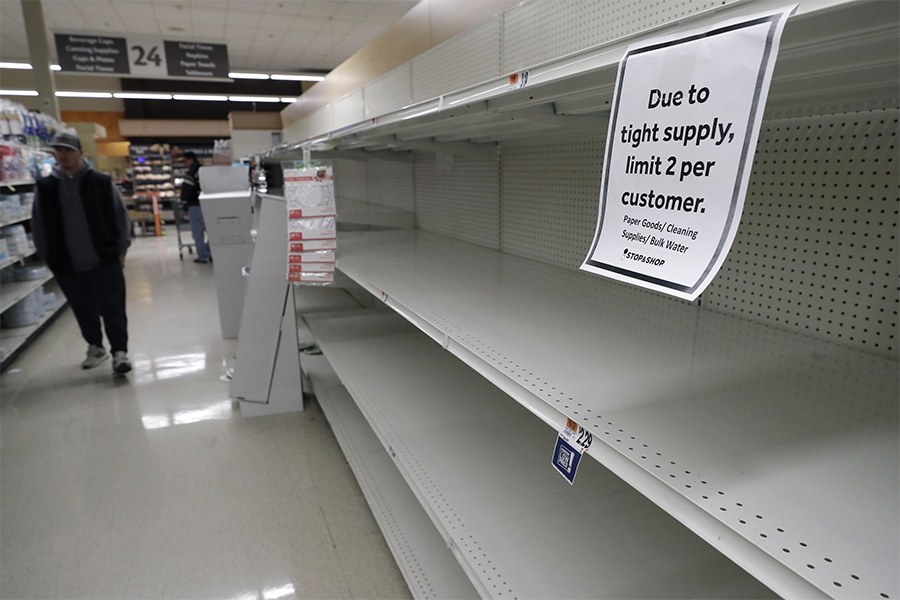 A passerby walks down an aisle with empty shelves where paper towels are normally on display at a grocery store, in Quincy, Mass. Photo via AP Photo/Steven Senne

As recently as last week, grocery stores were jammed with panicked customers filling their carts with meat, frozen foods, canned goods, pasta and other items to get them through what could be weeks of isolation. Now, though, many grocery stores are turning into ghost towns, as braving human contact feels more and more like—and perhaps is—putting your life at risk. Not unlike the real estate or stock markets, this kind of buying volatility is destined to cause disruptions in grocery store supply chains, and there are signs that food shortages could arise should the national lockdown linger into summer as many expect.

For now, there’s plenty of meat, pasta, and even toilet paper to go around—just like always. The potential problem isn’t related to supply. Rather, the real trouble lies in maintaining a smooth and effective distribution system, which could grind to a painful halt as more people get sick and small businesses crucial to the supply chain shut down. “Everything is available right now, but I think over the next week that’s going to become an issue,” says Jason Kaloyanides, general manager of Bostonian Foods in Everett, which supplies produce, meat, seafood, dry and canned goods, and other items to supermarkets, restaurants, schools, nursing homes and hospitals. “Things are going to get scarce and some products aren’t going to be available.”

So far, says Rob Vos, director of Markets, Trade and Institutions for the Washington, D.C.-based International Food Policy Research Institute, shortages of some items, such as toilet paper and hand sanitizer, are the result of “hoarding,” but he believes broader scarcity is on the horizon as food suppliers scramble to adjust to surging and plummeting consumer demands. “As containment takes longer,” Vos says, “I expect possible shortages for fresh fruits and vegetables, as these are labor intensive in harvesting, handling and distribution and hence could be affected by labor shortages … and social distancing requirements. These activities also rely heavily on seasonal migrant labor which could face restrictions on their movements, which is already an issue in Western Europe.”

Smaller food distributors could also go out of business because—at least for now—they’ve lost all of their restaurant business. Freight costs are expected to fluctuate wildly, as well, putting more uncertainty and pressure on distributors and the overall market. Many of the region’s food suppliers have flooded stores to keep up with demand over the past two weeks, but are starting to pause on buying product to avoid stockpiles of food that might go to waste. “Right now, there’s plenty of supply. But it’s depleting,” Kaloyanides said. “The question is, once that’s gone, how easy will it be for them to replenish their stock.”

In a move to improve supply chain efficiency, the federal government, as part of a sweeping national emergency declaration, lifted restrictions on truck drivers, including caps on the number of hours they’re allowed to drive, if they’re delivering essential supplies such as food and medicine. In addition, the National Grocers Association, which represents 21,000 stores nationwide responsible for 25 percent of all grocery sales, is mobilizing to connect distributors and suppliers to government agencies to ensure food remains available. “Supermarkets are on the front lines of emergency response,” the NGA said in a statement. “And while emergency situations can be fluid, grocers make contingency plans ahead of time, which involves coordination with their many vendors throughout the supply chain, especially those that provide items people tend to stock up on, such as milk, eggs, bread, and water.”

While it’s still early to predict the impacts that global lockdowns will have on food supplies, there is evidence out of China that the crisis is taking a toll on agriculture and livestock. Vos’ organization reported this week that 60 percent of agricultural businesses in the most impacted areas of China were reporting logistics disruptions. These disruptions include shortages in feed for animals, a lack of workers to care for livestock and tend to crops, and an inability to get other essential supplies. “As spring arrives, agricultural enterprises in many places face serious logistics problems,” the IFPRI report states. “Livestock farming also faces challenges similar to China’s—problems that may require government intervention to avert shortages or price spikes.”

As a result of the pandemic, Kaloyanides has lost all his restaurant business, which was 90 percent of his sales, and is now working with only a skeleton crew to supply supermarkets and a few other customers with produce and meats. He’s concerned about supply chain logistics, but his main worry is the health of cashiers and market employees. “If all the grocery store workers start getting sick,” he said, “that’s where I anticipate a major issue.”

Sam Rocco, owner of BC Produce Inc., a large distributor in Chelsea, agrees that workforce health could become an issue across the food distribution system, but tried to put a rosy spin on the increasingly nerve-wracking situation. “At the moment, the system is running smoothly,” he said. “We’re getting plenty of product. When there was the rush to the supermarkets, that caused a spike in demand at the farms and in the need for transportation, and that caused a little bit of disruption, but since then, that rush has subsided. It’s a very robust system. I think we’re going to survive it. Hopefully it won’t last too long and we’ll all be alright.”