Caught up in the state's lockdown but locked out of federal aid, the industry says a state-run PPP program would be a sorely needed lifeline. 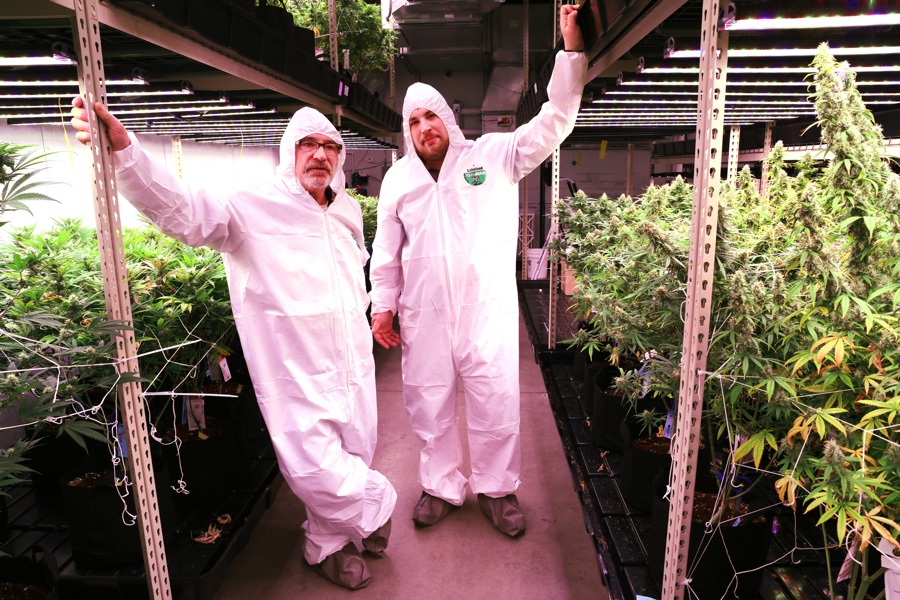 Fred Gibson, left, manager and owner of Gibby’s Garden, and his son, Joe Gibson, co-owner and operations manager, pose in the flower room of their cannabis business in Uxbridge, MA on Jan. 2, 2020.  (Photo by Pat Greenhouse/The Boston Globe via Getty Images)

Recreational cannabis dispensaries have begged and pleaded (and sued) to be allowed to keep their doors open, but the Baker administration so far hasn’t budged. At least for now, Massachusetts has continued to list adult-use pot shops as non-essential businesses—despite allowing liquor stores to keep the booze flowing, much to the industry’s frustration. And it’s put the state’s nascent marijuana industry in an incredibly tough spot.

Unlike other small businesses, pot companies aren’t eligible for federal aid. That includes the much-discussed Paycheck Protection Program, which provides companies with desperately needed loans that can be forgiven if used for certain expenses like keeping employees on staff. Without some kind of lifeline, cannabis company owners warn we could see a wave of closures—just as the industry was starting to get off the ground, pumping millions in tax revenue into the state’s coffers, providing good, steady jobs, and giving people victimized by the war on drugs a chance to make a living in the newly legal industry.

But some help may be on the way. State lawmakers are now pushing a bill that would create a local PPP of its own, and make it available for companies excluded from the federal program. It’s unclear what such a program would cost, but it wouldn’t be cheap. Still, pot companies say it’s the least the state can do.

Testifying at the hearing about why such a fund is needed, Angela Brown, owner of the family-run dispensary T. Bear, asked,”How can we be expected to overcome these unprecedented times with no help, while help is being given to other industries?” T. Bear had the misfortune of opening just one day before the lockdown took effect, and has since had to furlough nearly all its employees. “As a Massachusetts company, I pay taxes, very expensive licensing fees to the state, and give back to my local community through a host community agreement. As a small business in Massachusetts, I should have access to the economic relief. Without this bill passing, local cannabis companies face extinction.”

The case she and other pot company owners made Tuesday at a hearing on the bill, held via Zoom video chat, is a compelling one. Before the pandemic hit, the rapidly growing industry was beginning to really boom, pumping millions into the state’s coffers and supporting some 8,000 jobs growing, selling, manufacturing, packaging, and transporting the products. The companies have also already endured years of waiting for approval to operate, thanks to a state system that can be slow, cumbersome, and expensive to navigate. If the state sits back and lets them flounder now, it would be a financial disaster at a time when tax revenue has plummeted.

“Our cities and towns can’t afford to lose any pocket of industry, or any revenue producing commerce. We’ve seen how the loss of even one small business can create a financial pain point that ripples through a community,” state Sen. Diana DiZoglio said at the hearing, adding that the loans were “urgently needed for those businesses that have nowhere else to turn.” DiZoglio, co-chair of the Committee on Community Development and Small Business, is the bill’s sponsor.

There is, of course, another way to help keep the industry afloat: The state could simply reclassify adult-use pot sales as “essential.” The industry has pledged to comply with stringent rules about cleanliness, sell product on an appointment-only basis, offer curbside pickup the way restaurants around the state do, and, amid fears about visitors from states without recreational marijuana, sell only to customers with Massachusetts IDs. Asked for approximately the millionth time about whether he’d entertain those offers at his daily press briefing Tuesday, Gov. Charlie Baker did not back off his earlier refusals to do so, and deferred to a newly formed task force run by Lt. Gov. Karyn Polito that is making decisions about how best to open the state’s economy.

But Sen. Sonia Chang-Diaz made the case for doing just that at Tuesday’s hearing, and said she hopes passing an expensive statewide PPP bill isn’t necessary. “I just think its bananas that we are not allowing these retailers to open in a way that’s safe, that’s controlled, and that can serve the greater needs of the commonwealth in this time of emergency,” Chang-Diaz says. “I think it is a self-inflicted wound.”