Could There Be Buried Treasure underneath Boston?

As popular lore would have it, the Boston area may be home to the bounties of Captain Kidd and Thomas Veale. 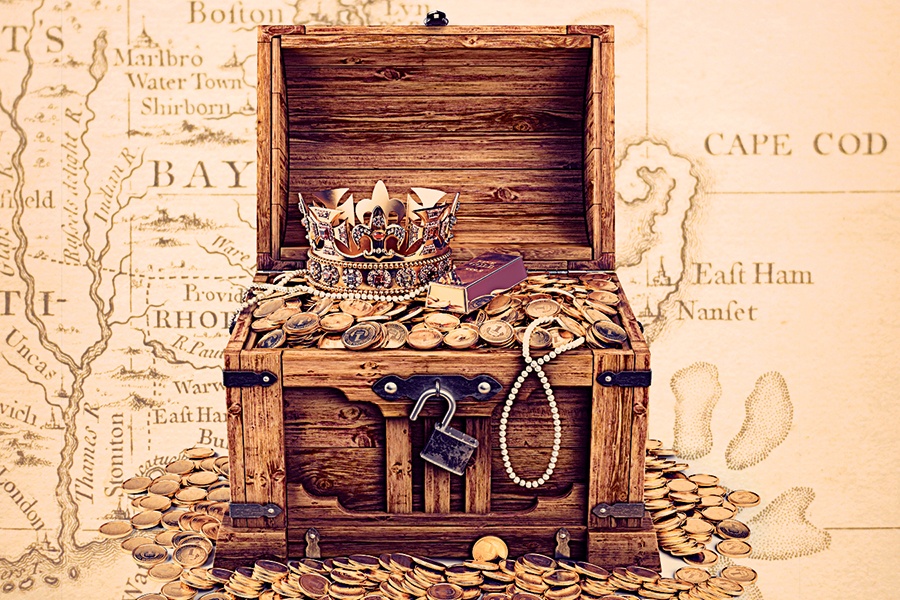 I watched the season finale of Expedition Unknown last fall, in which the host and a local guy solved a famous puzzle and found a long-lost key in the North End that they exchanged for a precious jewel. That got me wondering: Could there be other buried treasure here in Boston? —T.M., Dorchester

Hey, T.M., thanks for writing—I love Expedition Unknown! Truly a fun show, and even better, that host you mentioned is a local guy: Josh Gates is from Manchester-by-the-Sea, and a Tufts alum to boot. But for those who don’t tune in, here’s a recap: Each week, Gates goes around the world, trying to solve historic mysteries such as the whereabouts of Amelia Earhart’s missing plane. In this case, he met up with a Bostonian named Jason Krupat, who thought he’d cracked the code in a 1982 book by the late Byron Preiss called The Secret, which featured enigmatic paintings and poems that hinted at the locations of 12 hidden keys. And lo, it was indeed a thrill to watch Krupat and Gates finally dig up the key in Langone Park off Commercial Street, which was later exchanged for a pristine gem of verdant peridot.

In searching for other buried-treasure stories in the area, though, I came up with more fun lore than found loot. One famous rumor is that Boston Harbor is one of the places where the notorious Captain Kidd hid his booty—one suggested site is Gallops Island. My favorite tale, though, is that of pirate Thomas Veale. According to the New England Historical Society, back in 1638, Veale was hiding out in a cave in the Lynn Woods when an earthquake hit, burying him and his treasure under what is known as Dungeon Rock, a site that has been dug out and searched for years, still to no avail.

But to be honest with you, T.M., I ended up being less interested in long-lost filthy lucre once I started reading the state’s archaeology report from the Big Dig, published in 2001. Over dozens of pages, the authors detailed some of the hundreds of thousands of precious artifacts—from Native American fishing gear to decorative brasswork—found throughout the construction project in Charlestown, Southie, Spectacle Island, and the North End. Each had its own tale, and made me think about what Ellen Berkland, archaeologist for the state’s Department of Conservation & Recreation, told me when I asked her your question: “It’s not about the stuff; it’s about the story.” It was a reminder that in a region as old as Greater Boston, our buried treasure is the history that lies everywhere, in the ground beneath our feet.