There's never been a better year for a later sunset. 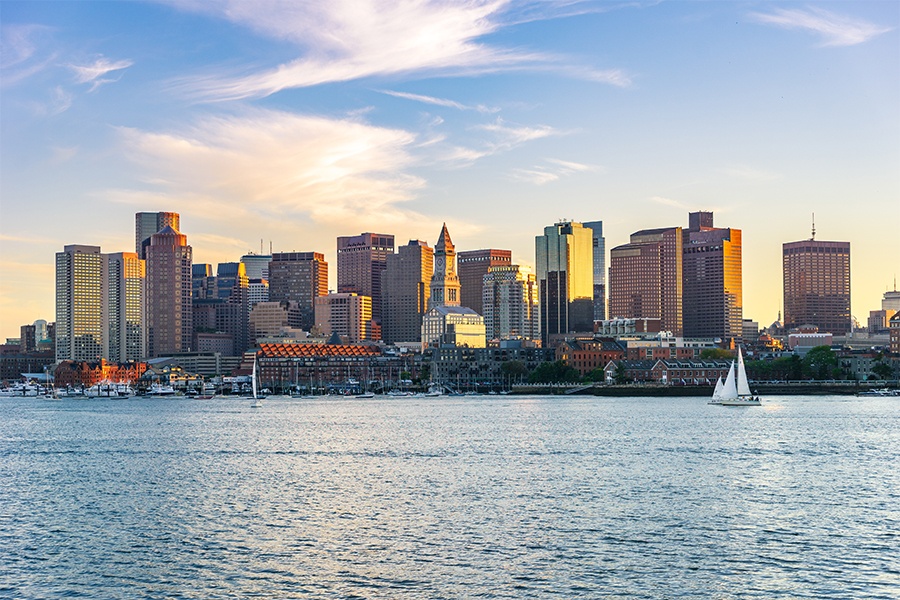 We’ve all managed to stave off some quarantine cabin fever by staying outside all summer long, but the extra layers and shorter late-afternoon walks are harbingers of the darkness to come. There’s no getting around the fact that Boston faces a long, dark winter ahead, with restrictions around gathering indoors unlikely to lift. And there’s one clear way to ease the burden: staying in daylight saving time permanently. Instead of losing an hour on November 1, let’s keep our summer hours, and with them, that blessed extra hour of sunlight.

Sound far-fetched? It isn’t. A bill to keep Massachusetts on daylight saving time year-round is languishing in our state legislature right now. The legislation was filed in January 2019 and co-sponsored by Senator John F. Keenan of Quincy and one of his constituents, Tom Emswiler. “COVID has upended life for all of us and forced us to rethink how we live our lives,” Emswiler says. “What better time to consider: Does it really make sense to arbitrarily shift our clocks for four short months? We’re already redesigning everything from work and school to weddings and Halloween. Why not commit now to stay on summer time?”

While there is a special urgency to stay on daylight saving time now, there have always been compelling reasons to make the switch. Six years ago, Emswiler wrote a popular editorial for the Boston Globe about his experience moving out of the Eastern Time Zone and into Atlantic Standard Time. Used in parts of eastern Canada, the Caribbean and South America, it would match our summertime clock, and we wouldn’t fall back. In the piece, Emswiler cites studies that show workplace injuries and heart attacks increase immediately after clocks spring forward, along with driver and pedestrian fatalities. But most pertinent to our current situation is the dearth of sunlight when we fall back. On our shortest days of the year, the sun sets at 4:11, according to NWS meteorologist Bill Leacham. But if we didn’t push the clocks back, the sun would set at 5:11 on those early December days. In other words, the sun would never set before 5:00 p.m. again.

The cruel mid-afternoon nightfall is depressing every year, but it promises to be especially dispiriting this November. Research suggests there’s a correlation between the clock change and Seasonal Affective Disorder, and those studies were conducted while it was permissible to congregate with family and friends indoors. Early sunsets during our quarantine winter will only further exhaust us. Think of all of those sanity-saving park visits—or in my case, sojourns to Carson Beach—that will no longer be possible when the sun sets at 4:20 p.m. On top of that, early sunsets could hurt our reeling restaurants. Boston has extended outdoor dining to December 1, but it remains to be seen how many people will brave the combination of frigid temperatures and total darkness. The extra hour of sunlight around dinnertime would mitigate one of those obstacles, and give our beloved establishments a better chance of surviving the winter.

The flip side to keeping daylight saving year-round, of course, is that it would lead to darker mornings, which make life a lot gloomier for anyone who has to be up and around early in the day. But with so many of us working remotely for the foreseeable future, and so many students attending classes remotely, the effect of a later sunrise this year is less than ever before.

The most compelling reason to keep daylight saving year-round, however, is in our heads. We are on the brink of a mental health crisis, as roughly 25 percent of U.S. adults reported suffering from symptoms of anxiety disorder in late June—triple the rate in 2019. Nearly 20 percent of adults in Massachusetts reported suffering from depression pre-COVID. Dr. Eric Zhou, a clinical psychologist at Boston Children’s Hospital, says he is very concerned about how people will fare with no sunlight to enjoy at the end of the day. “So much of how we deal with our mood is in part tied to what we do,” he says. “All of these things that can actually improve our mood are all things that because of the quarantine, we can’t do at all, and having this extra added layer of shifting our clocks back so at 4:00 p.m. it’s dark in the winter makes it even harder to feel motivated to find something to do. So it’s these two elements that go hand-in-hand that might really make mood a major issue for individuals during this fall and winter.”

Three years ago, a commission studying the feasibility of staying on daylight saving time year-round in Massachusetts ultimately voted 9-1 in favor. It did set several preconditions, such as bringing other Northeastern states along, as well as New York, but the initiative didn’t go any further. Making the change now would certainly be disruptive, but our lives have already been upended by the pandemic. Surely, maximizing the amount of afternoon sunshine during a time when it is illegal or reckless to do most indoor social activities is worth some inconvenience.

Despite widespread support—at least 32 state legislatures across the country have introduced bills to abolish the time change—Emswiler and Keenan’s bill is currently stalled in the committee on State Administration and Regulatory oversight, where it was sent to study in February. It does not appear as if Senator Keenan will renew his push this fall. And while Gov. Charlie Baker is the one who originally set up the feasibility commission study, his office did not return requests for comment about his position on the issue.

Giving us extra rays of sunshine when we need them most would deliver some relief to a weary populace. It’s a shame our legislature seems content to punt on the idea.