“Hostile Architecture” Is Everywhere in Boston, if You Know Where to Look

Amid a public outcry over armrests on benches at MBTA stops, critics point to all the anti-homeless design hiding in plain sight. 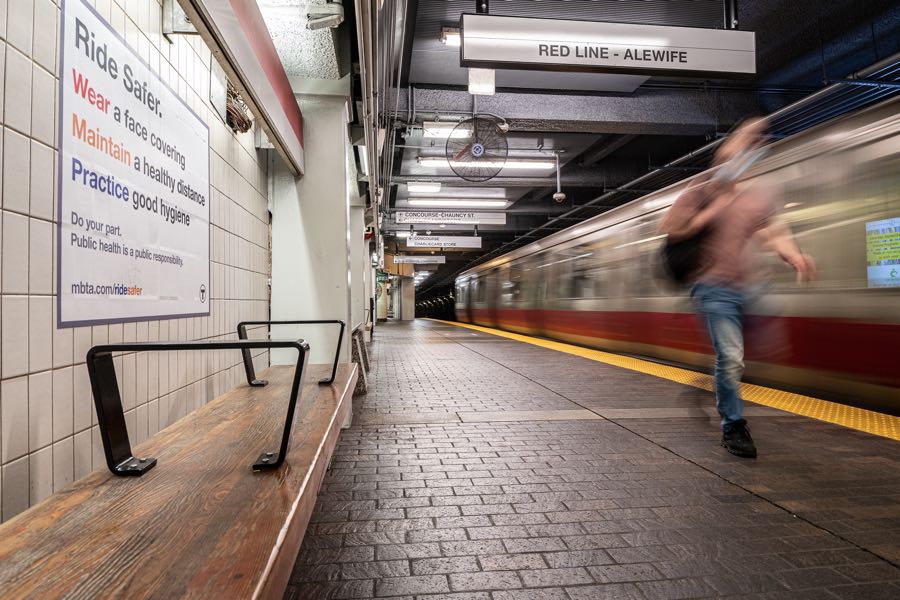 Never heard of “hostile architecture?” You will soon.

An increasingly vocal group of activists is pushing major cities like Boston to be more aware of the phenomenon, which primarily affects people experiencing homelessness, and the fight appears to be escalating.

Case in point: The ordeal the city saw earlier this month, when four people allegedly swiped the newly installed metal armrests on benches in the Central Square MBTA stop in the middle of the night, prompting Transit Police to share their photos and ask for residents to share any information they had about them. The group—who began calling themselves “Shlubs for Housing” after a feud over a headline on the local news site UniversalHub that called them that—has leaned into all the attention from the authorities, anonymously claiming responsibility for their actions on Twitter and using the platform to take a stand against what they believe to be anti-homeless urban design.

posting on behalf of the “shlubs” who took action in solidarity w/ our unhoused neighbors to remove anti-homeless architecture from Central Square T Stop.

we demand the removal of ALL hostile architecture & housing to be guaranteed as a human right.

read their statement below: pic.twitter.com/468dLUihP9

It was only the latest scene in a battle playing out across the country that has decidedly reached Boston. So what exactly is “hostile architecture?” And how prevalent is it in the city?

That is to say, it’s architecture that is designed to be “hostile” to visitors in one way or another. It’s a lot more common than you might think, says Caitlin Carey, a UC San Francisco researcher who has studied the phenomenon in Boston. “Once I show folks examples of it, I always apologize because once you know about it, you see it everywhere,” she says. “Basically, it’s just designing spaces, typically urban spaces, to manipulate behavior in a certain way, often to discourage certain unwanted behaviors. And a lot of those behaviors are associated with people experiencing homelessness. Unfortunately, a lot of the behaviors targeted by hostile architecture are life-sustaining unavoidable behaviors, like sleeping, or laying down, or resting.”

Sometimes it goes by other names, like “defensive design” or “unpleasant design,” she says. But it’s all the same thing.

Where it comes from

Often “hostile architecture” is the work of city or state government, which is sometimes explicit about its reasons for deploying it. In 2019, a MassDOT project designed to dissuade people from sleeping under a bridge in Arlington involved installing rows of nasty-looking metal spikes that looked like the kind of thing you’d use to shoo away animals. After a monsoon of backlash, including from officials in the town, the spikes were removed in a matter of days.

Sometimes the installations come with more benevolent sounding reasoning. The MBTA has said the armrests in Central Square, for example, were intended to make them more accessible to people with mobility issues and to conform to ADA guidelines..

But whatever the intent, Carey says the end result is the same: People who might have found a place to spend the night, were it not for some “hostile” design choice like a metal divider or a row of sharp spikes, are forced to find comfort elsewhere.

It’s not just the unhoused who are impacted

Airports and malls also install segmented benches to keep sleepy travelers and shoppers from lying down. Designers of parks and building complexes now add little metal notches to walls and railings in order to keep skateboarders from grinding on them.

If you weren’t looking for these increasingly creative and sly design choices, you might miss them. And that, critics argue, is what makes them so pernicious. You don’t realize architecture is “hostile” until it comes for you.

That may not be the case for long. When those controversial bench armrests first showed up in a few of the MBTA’s busiest stations late last year, the T framed them as a step forward. “Even the simplest additions can make a positive impact on how riders use public transit,” it said at the time. Critics online saw it differently. “This was nothing more than an Anti-Homeless tactic. Shameful,” one person wrote on Twitter. “you know exactly what you’re doing,” added another.

Soon, the Cambridge City Council itself was weighing in, passing a resolution calling on the T to reconsider the update, but decisions about subway stops are the MBTA’s domain, and the transit agency didn’t budge. That’s why frustrated activists took matters into their own hands, and removed the armrests themselves.

Boston is teeming with it 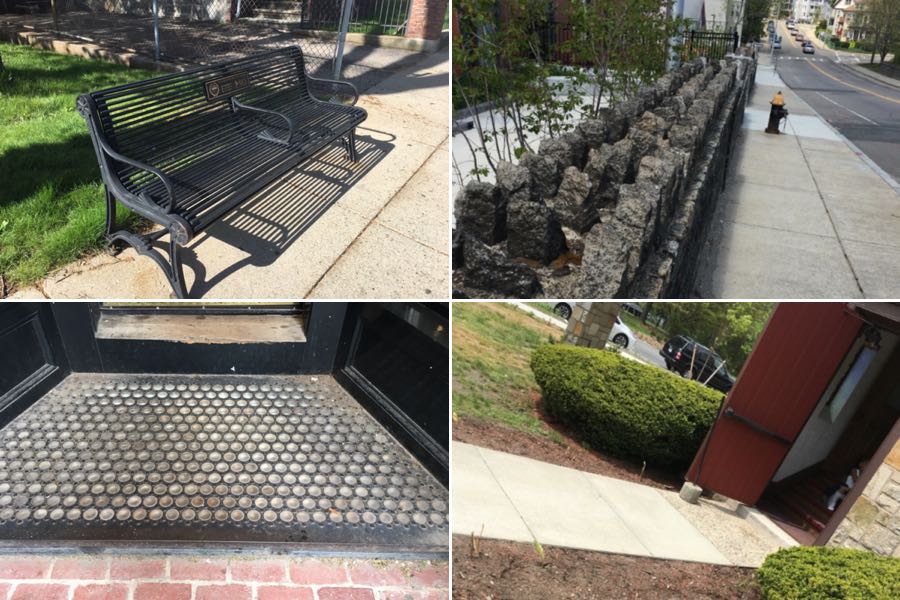 That is, if you know what to look for. Carey, while studying at UMass Boston in 2018, surveyed ten Census Block Groups in the city and found dozens of examples around every corner.

“Hostile” benches were the easiest to spot: A majority of benches, she found, had an armrest jutting through the center that would inhibit sleep. Others might have been slanted, or in some kind of a funky, arty shape, or they may be segmented with metal slats.

Retaining walls, too, were frequent offenders. Where a flat-surfaced wall along a park or apartment complex might have provided a place for someone to sit or lay down for a moment, she found builders had added rough edges, askew bricks, or wrought-iron spikes.

More subtle examples could be found in covered entryways to buildings, which are often inlaid with uncomfortable bumps, or built at harsh angles that serve no other obvious purpose than to make it difficult to relax while sitting or laying on them. She might, for example, see a pathway to a door made entirely out of smooth concrete, but find that the section nearest to the wall was not smooth, but jagged.

So what can we do?

Obviously the best solution to this problem would be to find stable, safe housing for everyone who needs it. Failing that, Casey advocates for including the voices of the unhoused in design processes for spaces open to the public, and giving them an opportunity to weigh in on whether any changes make it even more uncomfortable to live outside than it already is.

“They’re as much a part of our community as anyone else,” she says. “They deserve to be able to use public spaces in the way they need to use them, within the boundaries of safety and decency, of course. But, I mean, people need to sleep.”