Here's where things stand in Massachusetts and on a federal level. 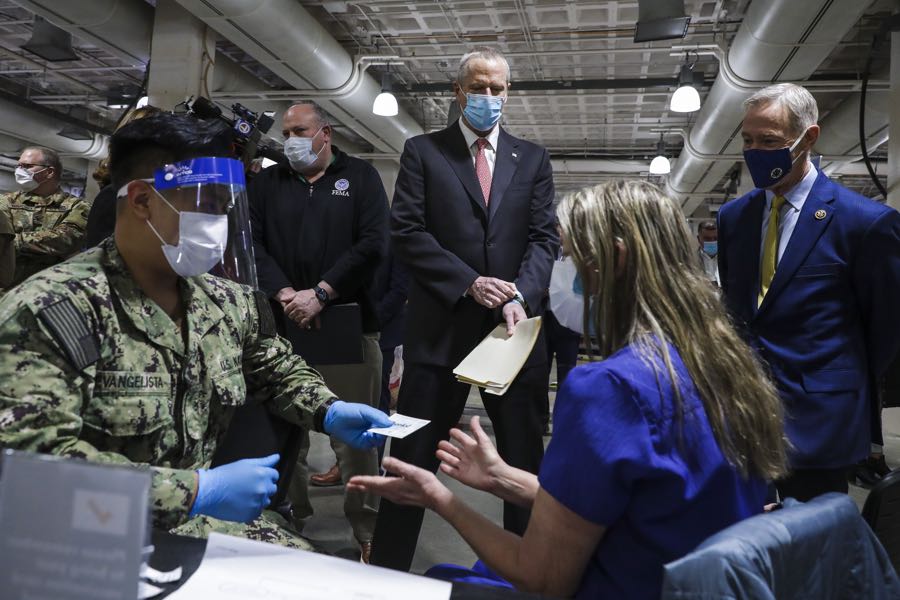 The vaccine passes are coming! Or…are they?

From the early days of the pandemic, the concept of a vaccine pass (sometimes called a vaccine passport) has been floated as a way to track who has and has not gotten one of the precious shots. There are a number of reasons why such a thing might be helpful. A vaccine pass might, hypothetically, let music venues throw big parties with the added comfort of knowing all the guests are inoculated. Requiring vaccine passes on certain flights might let airlines land in countries with strict COVID restrictions. An employer worried about staff getting sick could make vaccine passes a prerequisite for a job. Maybe the existence of a such a pass, and all the added benefits of having one, could entice more people to get vaccinated who might otherwise opt out.

But even after millions of doses of vaccine have been administered in Massachusetts, you may have noticed that we aren’t yet carrying around anything like the universalized, counterfeit-proof passes that have been talked about for more than a year (and no, those paper cards everyone is recklessly sharing on Instagram don’t count). And apart from a somewhat controversial promotion at Krispy Kreme, the only extra privilege you get from the vaccine at this point is antibodies, and some added peace of mind as you enjoy all that Boston has to offer to everyone, whether they’ve been vaxxed or not.

So will we ever actually see such a thing come to life in Massachusetts? Here’s a primer on where things stand:

It won’t come from the state

Gov. Charlie Baker has said he’s open to the concept of some kind of centralized system for tracking who’s been vaccinated, but doesn’t want to do it at the state level. “It’s a conversation worth having for all kinds of reasons, but I would rather have the feds give us a framework to begin with,” Baker said earlier this month. “Having 50 states doing 50 different things on this could get pretty complicated.”

The feds are punting to the private sector

The Biden administration has also said it is not interested in creating one of its own. Instead, the feds will leave that up to a growing cohort of private companies and nonprofits that are currently working to design a system, likely based in apps and involving QR codes, that could in theory offer a secure and reliable way to identify the vaccinated. The federal government at some point will need to weigh in on things like privacy and security standards, and offer guidance on when and how a vaccine pass might be required. It has launched an “interagency process” to make recommendations, but it hasn’t announced any yet.

Curious how this might work in practice? New York City offers some test cases. The city has debuted an IBM-developed app called Excelsior Pass, which verifies whether someone has either been vaccinated or tested negative for the virus. In a pair of first-of-their-kind tests of the app, fans used it to attend a recent Nets game at Barclays Center in February, and a Rangers game at Madison Square Garden.

Meanwhile, Las Vegas is now using an app called the Helix Health Passport. Unlike the Excelsior Pass, it only digitally verifies whether someone has gotten a recent negative COVID test. Officials believe it could help businesses that opt to use it, like convention centers and restaurants, offer customers some added assurance that their experience is COVID-free.

Other countries are experimenting with the concept

In Israel, which has vaccinated more of its population than any other country, residents get special access to indoor restaurants, gyms, and other indoor facilities by using a so-called “green pass” to verify their vaccination status. It’s led to some extraordinary and enviable scenes in that country of vaccinated people gathering and celebrating maskless. Whether other countries, including ours, follow in their footsteps remains to be seen. Already the European Union is in talks about creating a “European green certificate” for travel within the region.

The travel industry is acting first

Heading to Logan to set off on your dream vacation this year? All signs point to vaccine passes in your future. Experts are predicting you will eventually need some form of a vaccine pass to travel internationally, whether that’s because your destination requires it, or your airline does.  The International Airline Trade Association has been testing out its own version, called the IATA Travel Pass, at 22 separate airlines.

Travel guru Rick Steves told WGBH recently he believes proof of vaccination for international travel is all but inevitable, pointing out that travelers to certain countries have long been required to carry so-called “yellow cards” that denote vaccination against yellow fever. That seems especially likely given many poorer countries do not expect to be able to vaccinate their populations for what several years.

Several cruise lines have also said they will require that passengers be vaccinated when trips resume, and will need some form of a vaccine pass for verification.

You may not need one to travel domestically

There are currently no similar restrictions on domestic travel, and there may never be any. The CDC has said it will not recommend that travelers on domestic flights be required to get tested or vaccinated before boarding. The CDC’s latest guidance also says people who are fully vaccinated are cleared to travel, but does not say anything about a verification system.

Still, this could change. Hawaii, for one, has floated the idea of issuing its own vaccine passports for travelers to the state.

For what it’s worth, efforts to mandate vaccines have been shot down at the state level. There has been some talk about mandating them for government employees who are most likely to infect other people in their line of work, like cops and prison guards, but such a mandate has not yet happened and seems unlikely given Gov. Baker’s reluctance to issue such a rule.

Also bear in mind that Massachusetts has already, with a majority of residents still unvaccinated, moved in the opposite direction, recently relaxing its interstate travel rules on testing and self-quarantining.

For those reasons, it’s hard to imagine that vaccine passes would ever be used to limit our day-to-day movements in a meaningful way. Put simply, you will almost certainly never need a vaccine passport to go to Market Basket.

Boston venues are not keen on the idea

At least, not yet. The Globe reports that bigwigs at Fenway, TD Garden, and Gillette Stadium all say they do not plan to require them any time soon. Similarly, the state authority that runs the city’s convention centers says it does not expect to require vaccine passes. Instead, it will defer to the organizers of events at its facilities, who are ultimately responsible for health and safety at conventions and conferences.

Major companies in the state have yet to come forward with vaccine mandates. Local experts who have weighed in say that while requiring employees to get vaccinated would probably be legally sound, it might not make for good policy. It would also be unprecedented.

Vaccines are already mandatory in schools

Not all vaccine mandates are unprecedented, though. Massachusetts requires flu vaccines for all students, from elementary school through college—all of whom verify their status with sign-off from a doctor. New arrivals to the U.S. are also required to get vaccines as a condition of getting immigration benefits.

Whether schools or colleges will require vaccines before the fall semester is up in the air.

On the one hand, critics have raised concerns about civil liberties and government overreach, or about a system that might force people to take a vaccine against their will.

Others have raised equity concerns. Would it be fair to give special privileges to the vaccinated given the economic and racial disparity in who has been able to get a vaccine so far? And if the passes are smartphone-based, what does that say for the one-in-five adults who don’t own one? As a recent Herald column put it, vaccine passes would by definition create a system of “haves and have nots.”

Questions like these assure there will be plenty of vaccine pass skepticism to go around from across the political spectrum.

Some people are taking a DIY approach

This is not a recommendation from the CDC, or from us. But evidence abounds that as the ranks of the newly vaccinated are growing, so is use of those paper cards as an informal way of signaling that you’re chock full of antibodies and thus ready to hang. Case in point:

Just showed a rando a vaccine card for a joint share this is the world that awaits you get vaccinated lets be weirdos again pic.twitter.com/TAeKUbLB1k